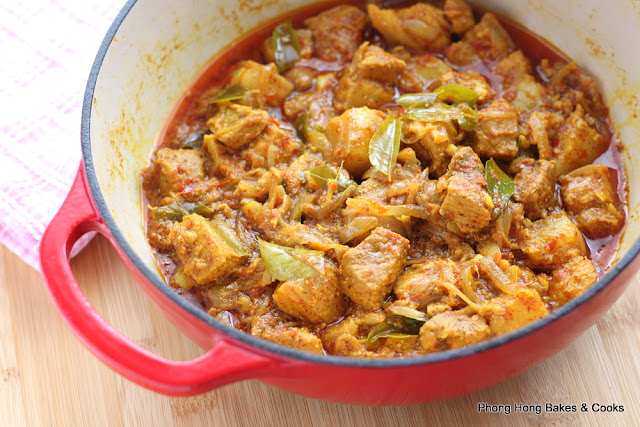 I have been wanting to try cooking a vindaloo, be it chicken or pork but I never did because I was iffy about the vinegar. Vinegar in curry seems rather odd to me.


But since Pork Vindaloo is another recipe in the cookbook that I bought recently, I decided to give it a go. The recipe called for a combination of pork belly, pork ribs and pork shoulder. Since I did not have any ribs in the freezer, I used only the other two cuts of meat.

It's not a difficult dish to cook though you need to grind up mustard seeds and cumin. The only other work you need to do is smash some garlic and finely mince some ginger. And oh, don't forget blended dried chilies. 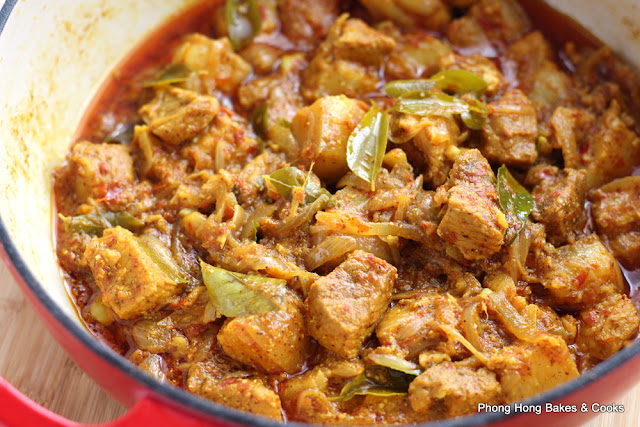 Like the Golden Spicy Chicken, the meat and all other ingredients are mix together to marinate for a few hours. Then you fry up some sliced onions and pour the marinated meat into the pot and leave the whole lot to simmer, stirring every now and then.

I admit that I had misgivings as the smell of vinegar and mustard seeds was quite overpowering when the dish was cooking. It was not a very nice smell.

But as the dish cooked further, the vinegary smell mellowed some and when the cooked curry was left to stand, gone was the smell of vinegar only to be replaced by the fragrance of spices and curry leaves.

As with most curries, this Pork Vindaloo improved upon standing and I found it to be delicious.

Method :
1. In a big bowl add pork, chili paste, ground mustard and cumin seeds, garlic, ginger, turmeric powder, vinegar, oil and salt. Mix well and leave to marinate for 4 hours.
2. When ready to cook, heat oil in a Dutch oven (or any suitable heavy based pot/pan) and saute sliced onions until wilted.
3. Add marinated meat and stir to mix. Simmer the meat covered over low heat for about an hour and stir every now and the to prevent burning.
4. There is no need to add water as the meat will release water and is allowed to cook in its own juices.
5. When the meat is tender, add curry leaves and taste for seasoning.
6. Continue to simmer until oil seeps from the gravy.
7. Allow to stand for a few hours before serving and the flavors will improve upon standing. 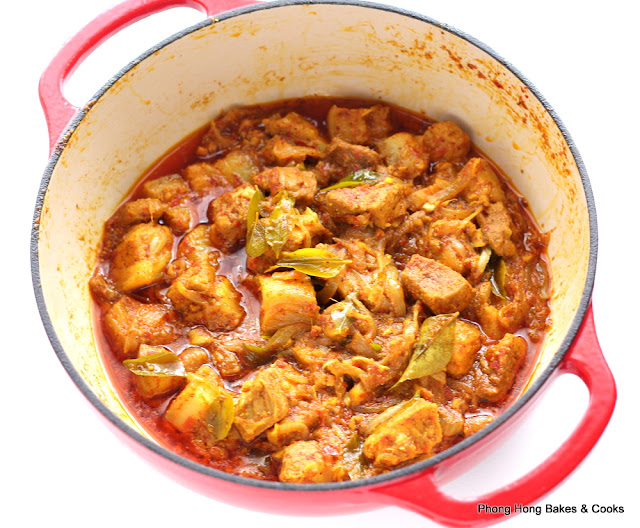