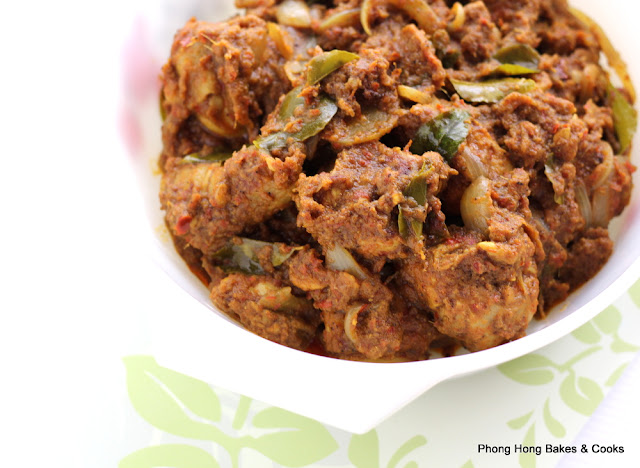 I have been quite successful in resisting the urge to buy cookbooks whenever I visit the bookshop. Every time I take a walk to Popular bookshop or BookXcess, I am inevitably drawn to the cookbook section. I'm a cookbook addict.


But just the other day, I caved in. I bought this. 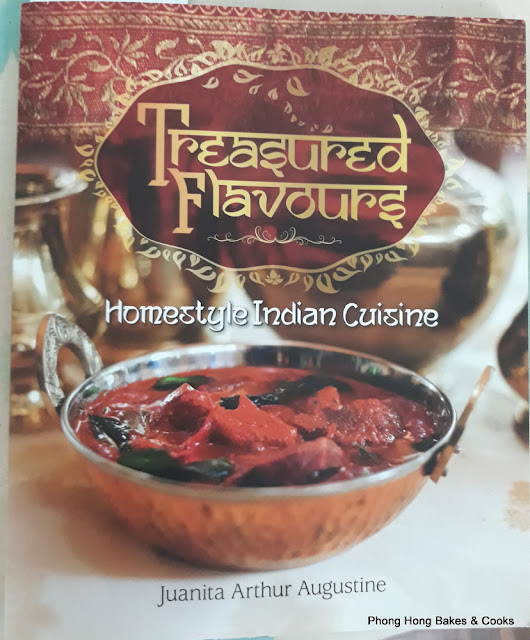 The first recipe I tried is this Golden Spicy Chicken which is the author's mother's signature dish. Even though Indian recipes have a long list of ingredients, you will realize that it is just a matter of gathering those ingredients and then grinding (a blender/mill helps) and together with sliced/chopped ingredients, dumped into a pot to simmer away.

There are two marinades in this dish - (1) dry spices which are ground and (2) a combination of ginger, garlic, Bombay onions and vinegar which are also ground to form a paste.

Then you simply marinate chicken pieces for a few hours with the two marinades and some turmeric powder, chili paste and salt.

After that you pour the whole lot into a pot and cook over medium heat until the chicken is cooked. OK. There is a caveat to this dish. You have to remove the chicken pieces and shallow fry the chicken until golden. 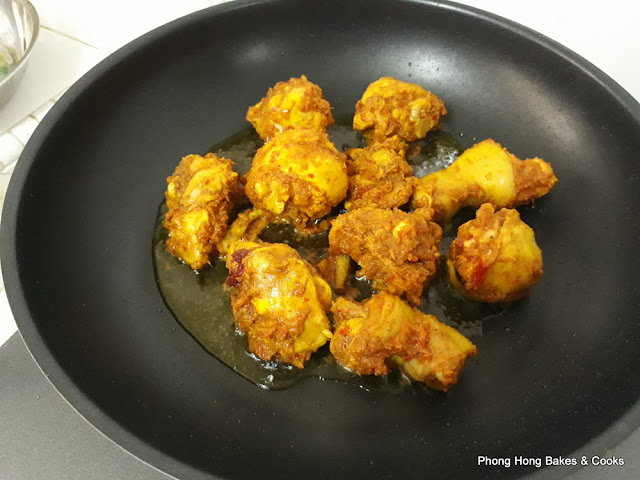 I did that in my non-stick pan in two batches. The recipe calls for the chicken to be cooled completely before shallow frying. But because I was in a hurry, I did not do that. 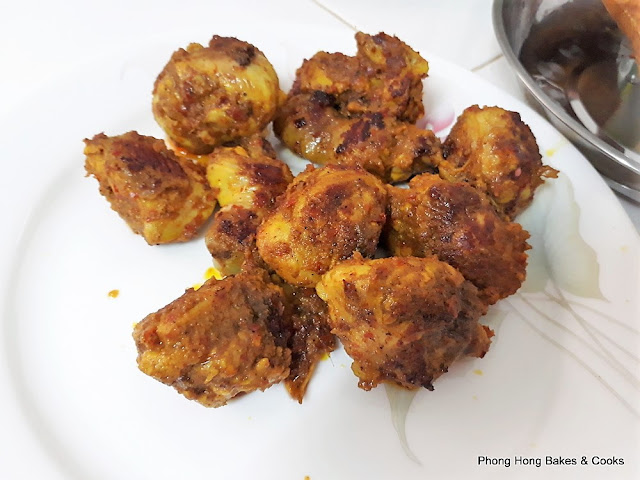 Once all the chicken are fried, you have to fry star anise, sliced Bombay onions and curry leaves and add the chicken and gravy and simmer until the gravy is thickened. I know, there are many steps here but it is entirely worth the trouble because, wow, this chicken curry is incredible. 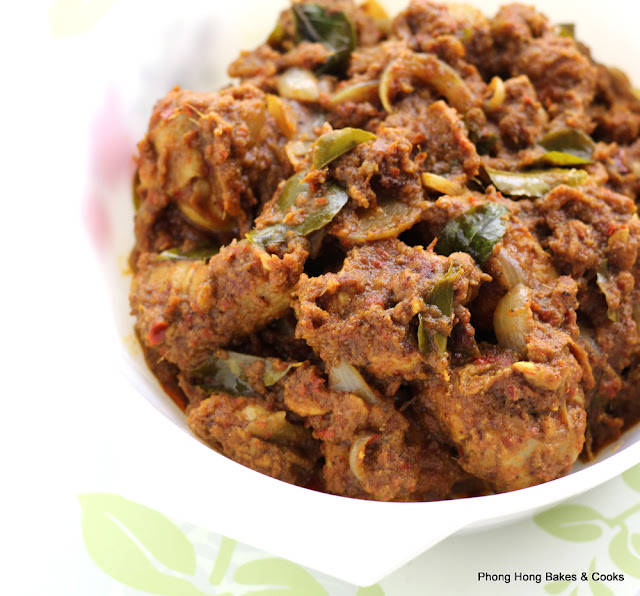 It tastes like those dry chicken curry that are served at banana leaf restaurants. I couldn't believe that I actually cooked something as tasty as that. My only regret is adding too much chili paste (4 tbsp as per the recipe) as the curry is way too hot for me.

As I was stirring the chicken at the final stages of cooking, I smelt something burning. Oh dear. I remember reading the author's advise that cooking should be on low heat to avoid burning.

I was using my Dutch oven and had to use an oven mitt. Somehow the mitt was suspect and I took a sniff at it. 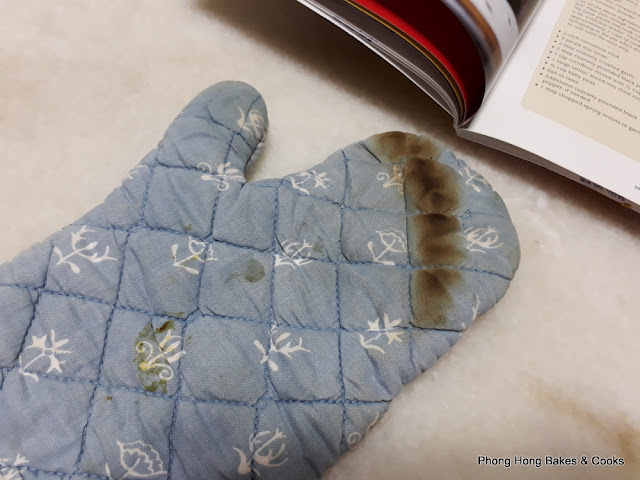 Seriously, I don't know how that mitt got burnt and that was the source of the smell hah...hah.... Phew!

Note : Use an electric mill to grind all the above into a powder.

Note : Use a blender to blend all the above into a paste

Method :
1. In a large bowl, add chicken, turmeric powder, chili paste, salt, marinade A and marinade B. Mix together to combine and leave to marinate for 2 hours.
2. When ready to cook, pour chicken and marinade into a Dutch oven (or any suitable pot) and cook covered over medium heat until chicken is cooked.
3. Turn off the flame and remove chicken pieces. Leave the gravy to sit in the Dutch oven.
4. In a non-stick pan, shallow fry the chicken pieces until golden but do not fry until crispy.
5. Since I used non-stick, I cleaned the pan using paper towels and used the same pan to continue the next step. You may use a clean pan to do this.
6. Heat oil in the pan. Add star anise and fry till fragrant.
7. Then add the sliced Bombay onions and curry leaves. When the onions are wilted, pour the contents of the pan into the Dutch oven and add the fried chicken.
8. Simmer over low heat until the gravy is thick and oil seeps from the gravy. 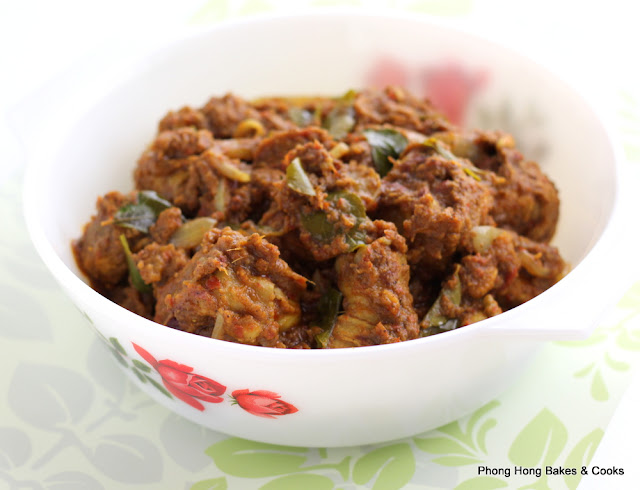