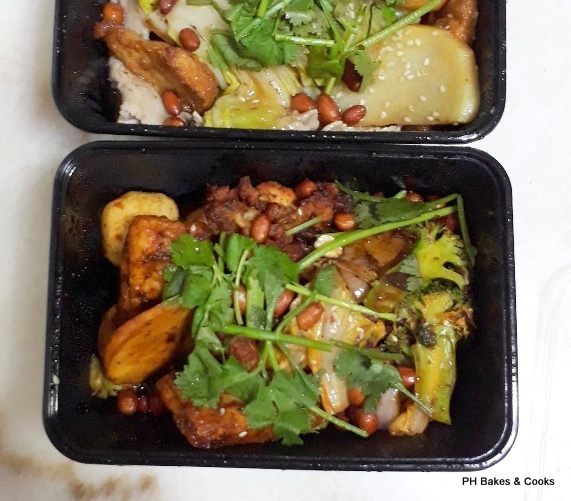 This happened yesterday, Friday. After having prepared my meals for a few days in a row, it was time to take a break. What to eat?


After scrolling through the list of eateries on Grabfood (one of my favorite pastimes), I thought Hotpot Kitchen@1 Utama sounds interesting.

I have always thought that "hotpot" means steamboat but apparently not. The first time I read about this type of "hotpot" was on Claire's blog. For this "hotpot" you pick your greens and proteins and the kitchen will stir fry it for you. The selling point here is the level of spiciness that you can choose for your hotpot meal. 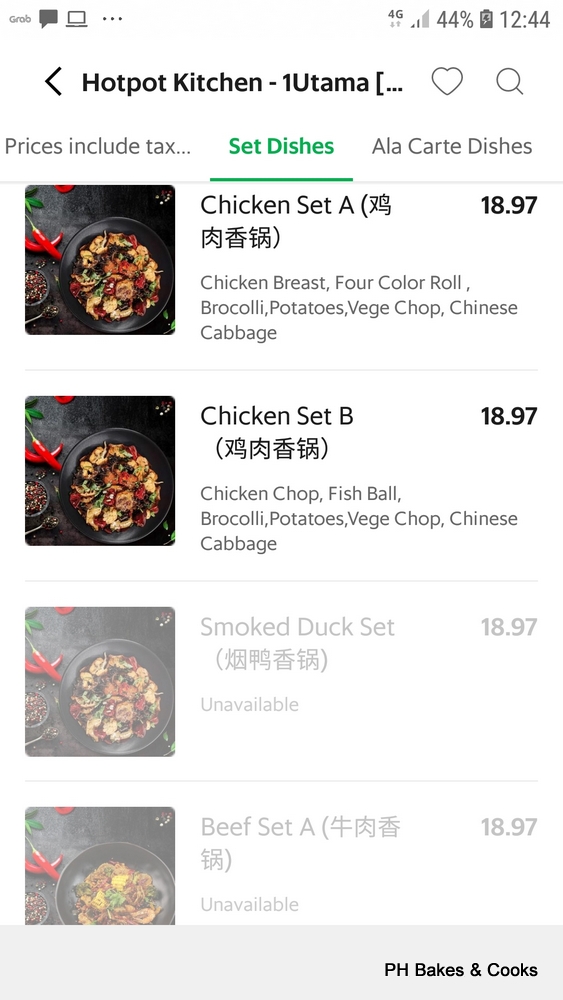 I was interested in the Beef Set but unfortunately it was not available. So I selected from the Chicken Set. I chose Set B because of the chicken breast in Set A. 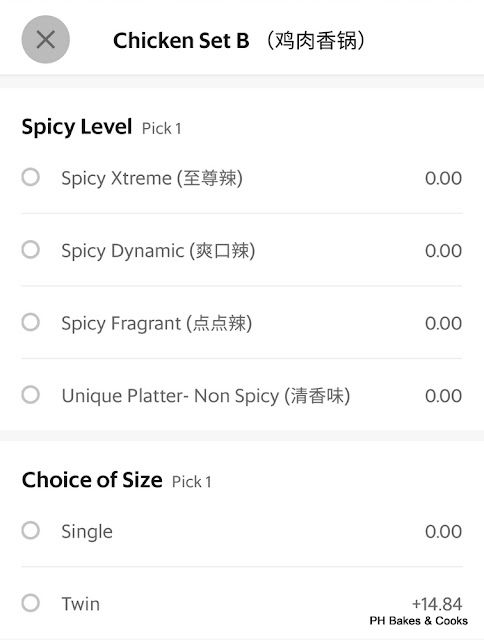 As for the spicy bit, I had to google to find out exactly what  is the difference in the level of spiciness between the Spicy Extreme, Spicy Dynamic and Spicy Fragrant. From what I read, Spicy Fragrant is the mildest. And then there is the Unique Platter-Non Spicy, for those who cannot tahan the heat.

I chose Spicy Fragrant and as for the size, I chose single. Since I was ordering lunch, why not get another portion for dinner? 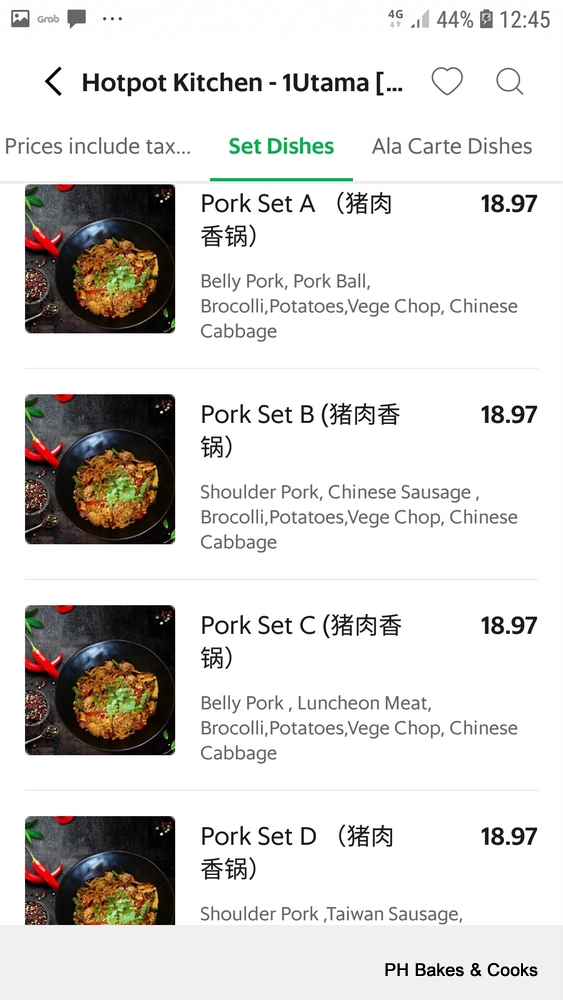 I selected the Pork Set D and decided on non-spicy just to see how it tastes without the chilies.

You can also add on stuff if you want.

Carbs are in the form of rice, yee mee, udon and instant noodles. 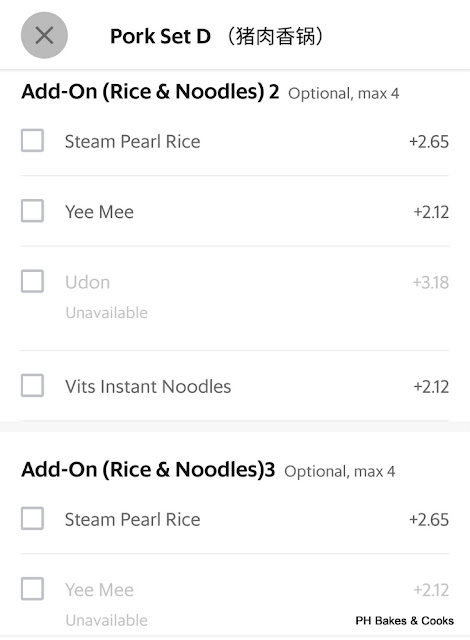 Additional vegetables will set you back RM4.24 while ... 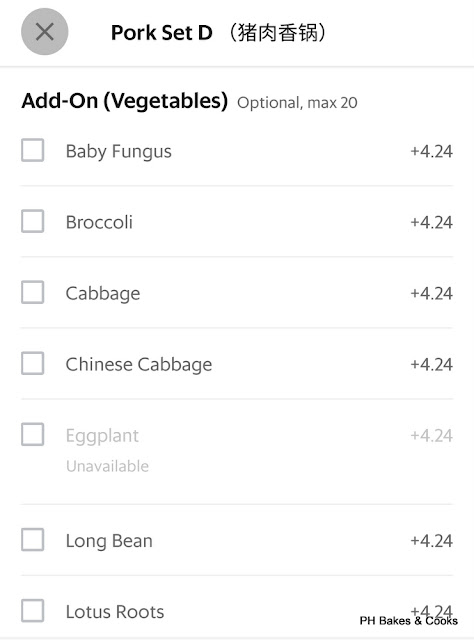 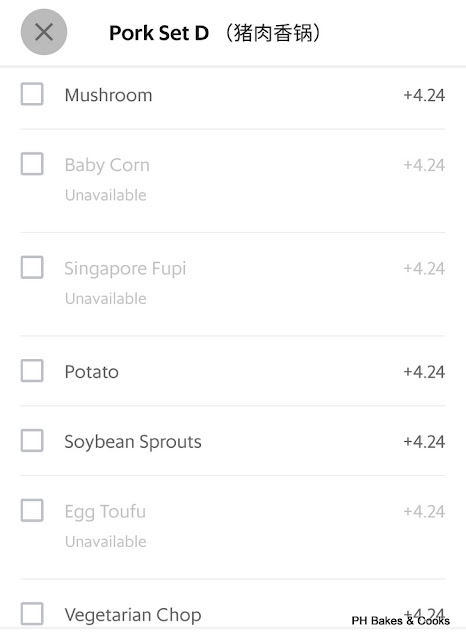 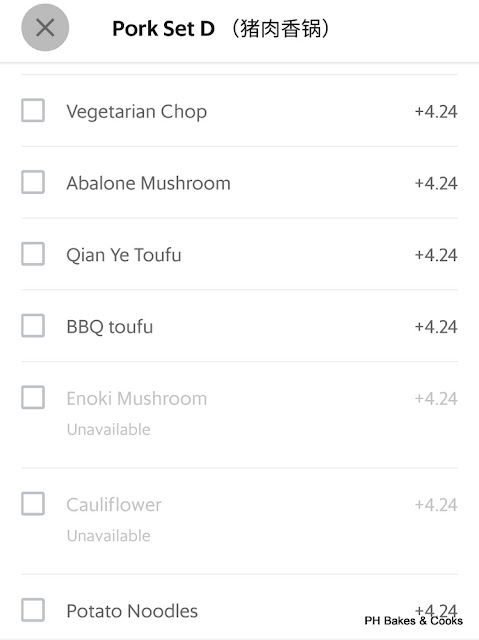 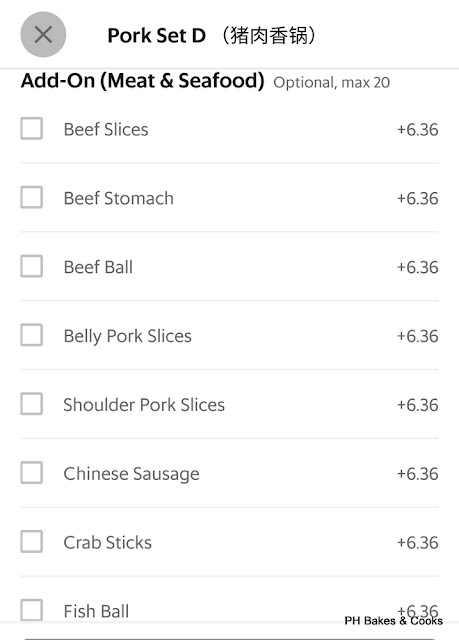 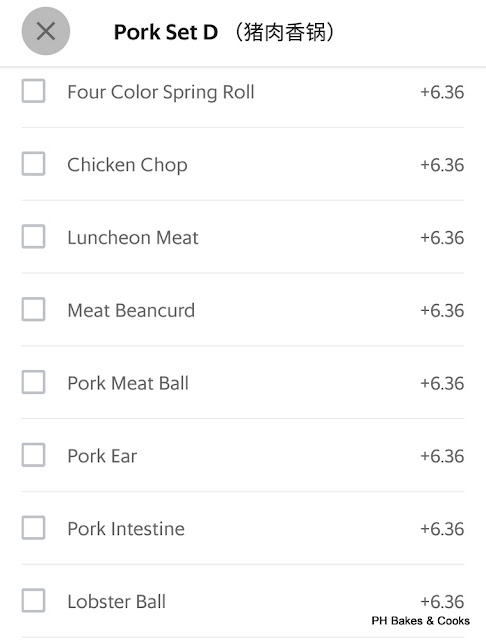 I didn't add on anything and cooked my own rice. 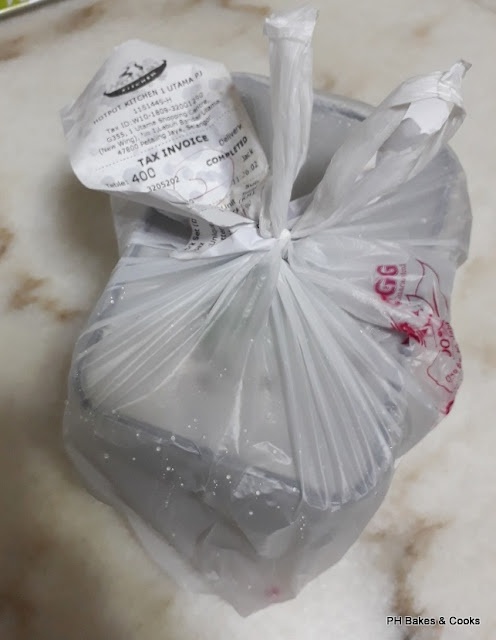 The food arrived in the rain, piping hot. 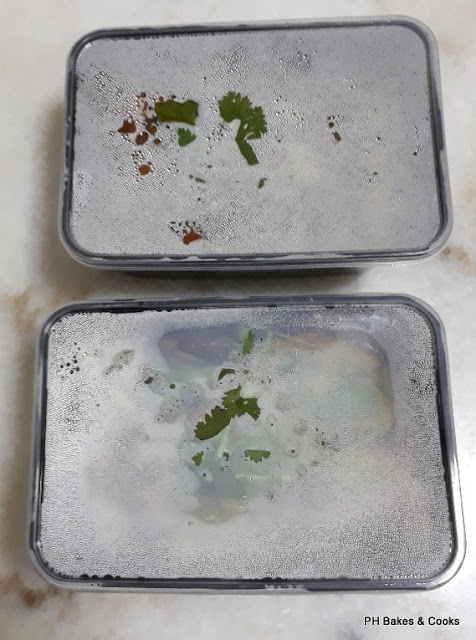 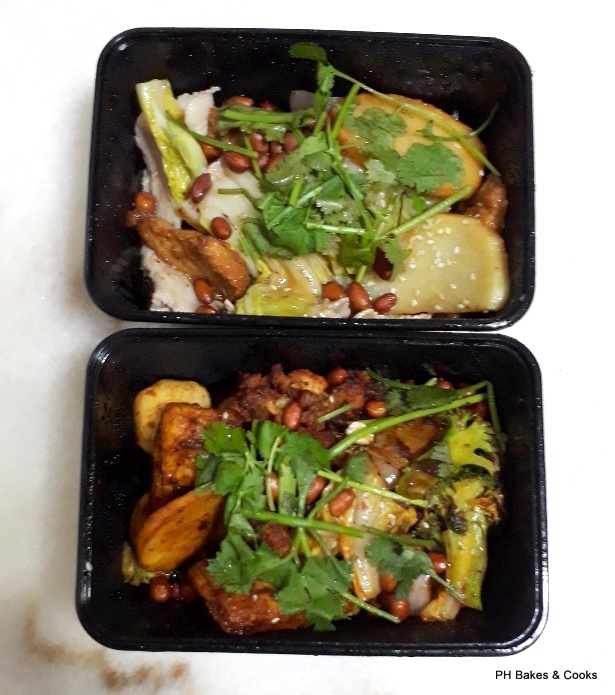 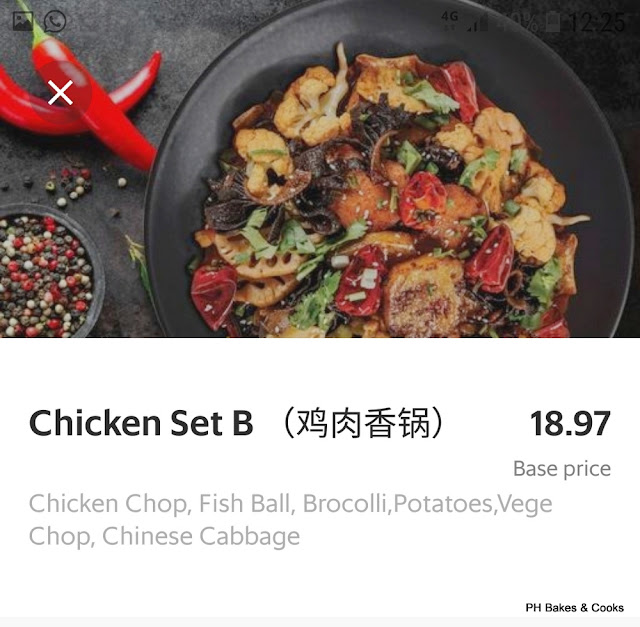 I had the Chicken Set for lunch. 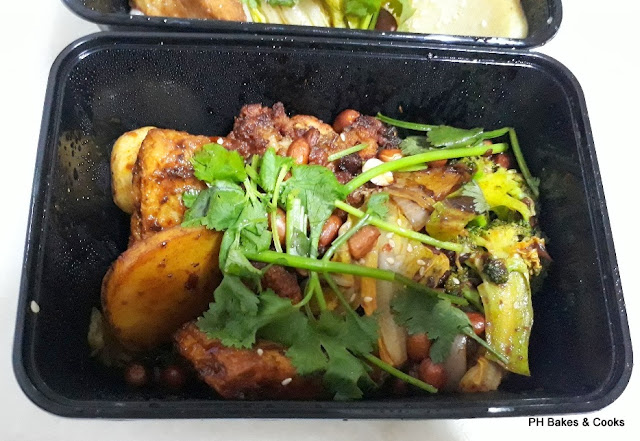 I transferred the contents into a plate. 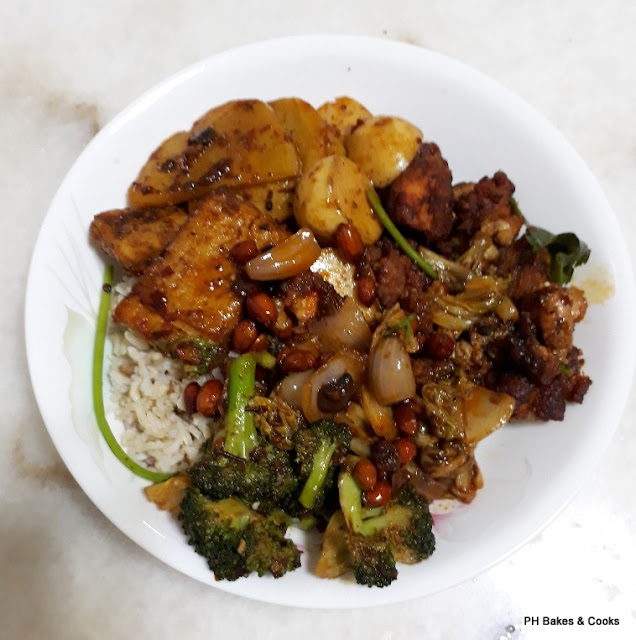 There you go. The chicken is deep fried with five spice taste. The potato slices were slightly undercooked. Overall, it was quite salty (I was very thirsty afterwards), with smoky aroma from the mala and the spicy level I chose was tolerable. 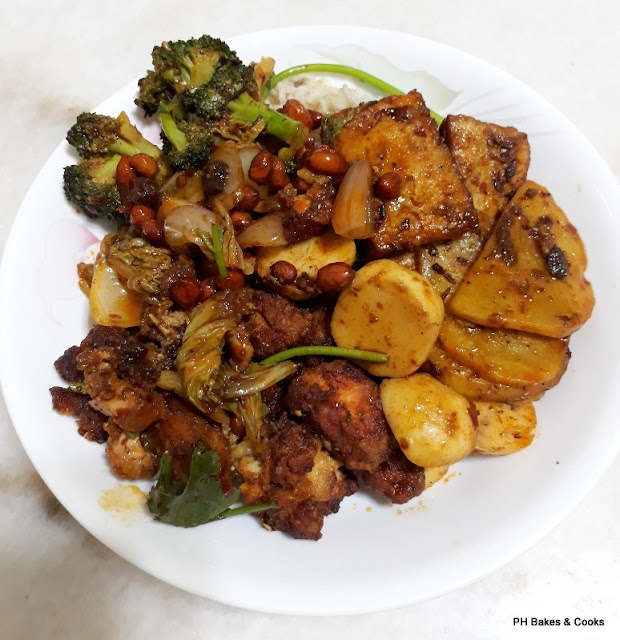 It is not a taste that is to my liking, although I found it edible. Honestly, this hotpot is not quite my thing. I satisfied my curiosity and it gave me an idea to cook my food like that for food prep (with my preferred flavor) in what my Malay friends would describe as pakat lebur-lebur aje - just chucking everything together in the pan hah..hah...

Portion wise, I was happy as it was quite big for one person. This could be easily shared by two small eaters. 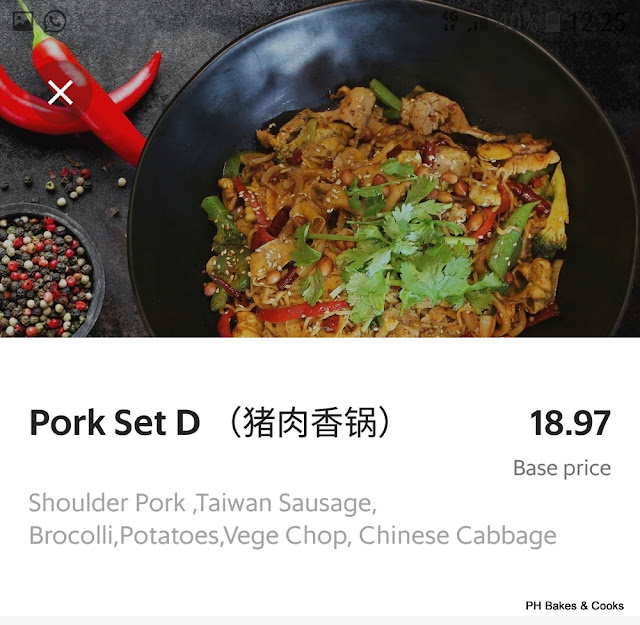 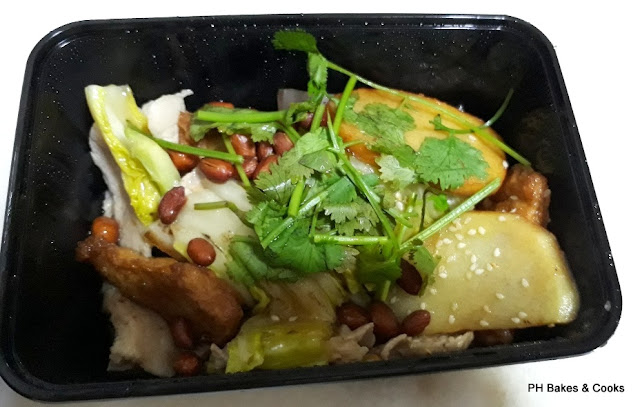 As you can see, it is pale because got no mala. Looks like very little but on a plate you can see the actual volume. 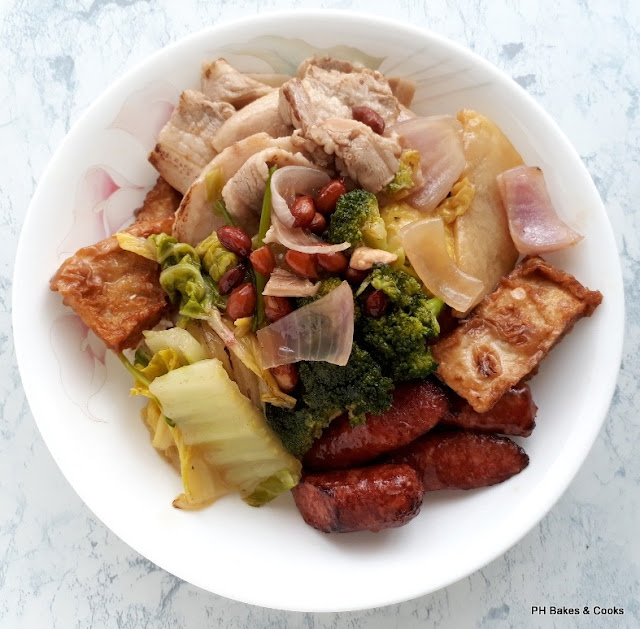 Contents pretty much the same as for the chicken version except for the Taiwanese sausage (the reason why I chose this set). 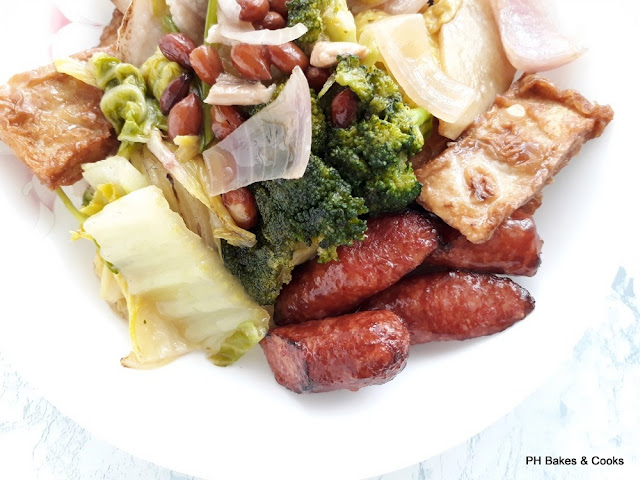 With this I conclude that all the heavy seasoning goes into the mala paste. And yes, I enjoyed the Taiwanese sausages which were savory and a little sweet.

Actually this hotpot food is not bad since it has proteins and lots of vegetables with some processed food thrown in.

But if anybody wants to meet up at a hotpot restaurant, I won't say no lah, but I would prefer of you picked Chili's wahahahaha!!! 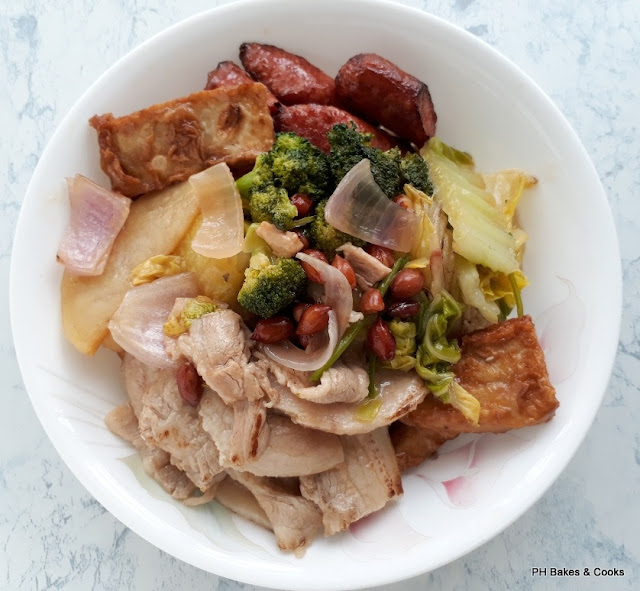