Happy Birthday Young Man! You Made Your Auntie Feel So Old 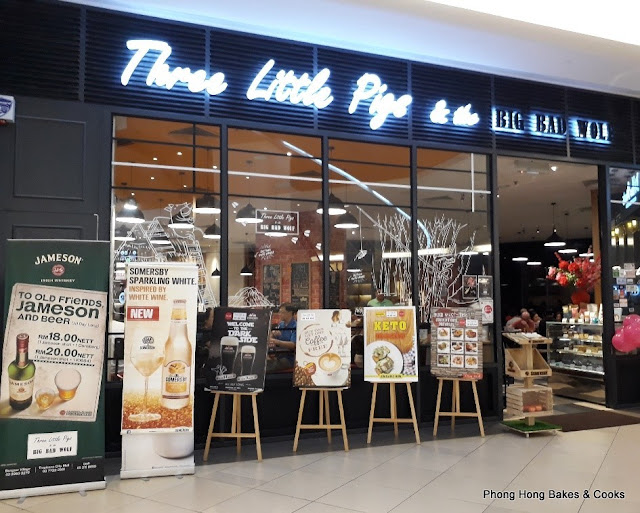 My parents are in town and my nephew's birthday happened to be on that Sunday. So it was a family birthday lunch for us at Three Little Pigs & The Big Bad Wolf@3 Damansara.


I have two younger brothers. The older of the two is married and has two children. It was his boy's birthday.

It felt like only a short while ago that he was this cherubic cute little baby that everyone fought over to carry. And now the young man is 17 years old. He is taller than his dad and taller than his uncle (who is a six footer). Gosh. I feel so old. So auntie.... And I am so short....... 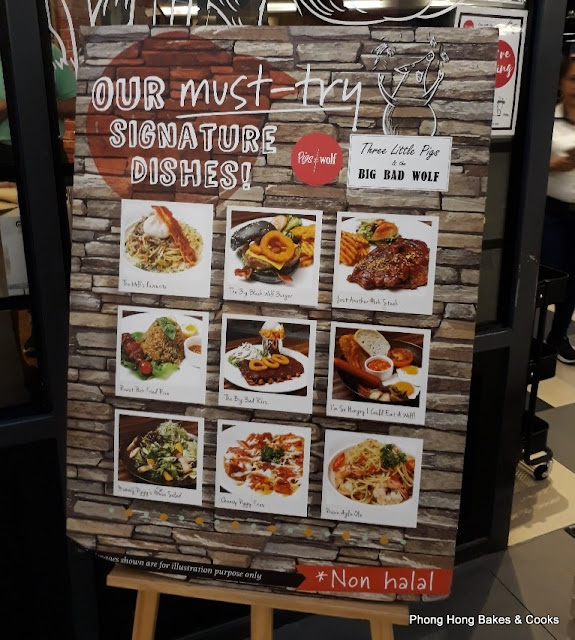 I have not visited this restaurant lately and as far as I remember, I love the food here.

The first visit was also with my brother and family but at that time, I did not take any pictures and therefore did not blog about the visit. I subsequently returned with my parents here and here. 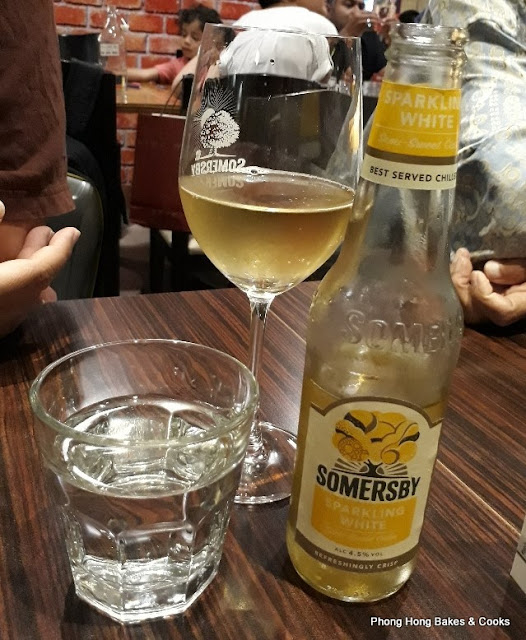 So there we were again. The Birthday Boy's daddy was in a celebratory mood and had a Somersby Sparkling White while his predictable uncle and auntie had their usual. 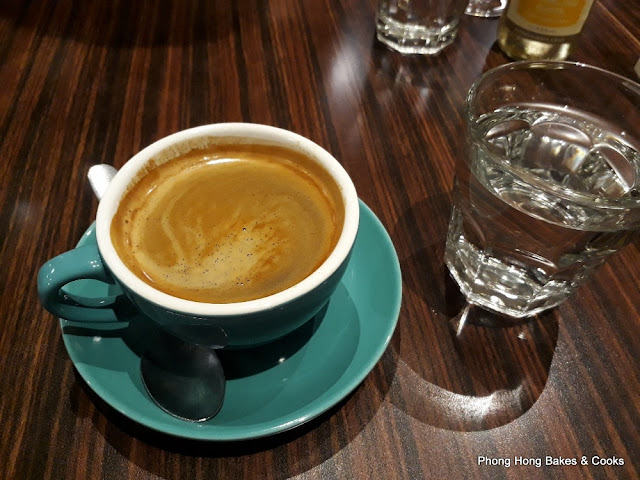 A Long Black for auntie and his mummy. 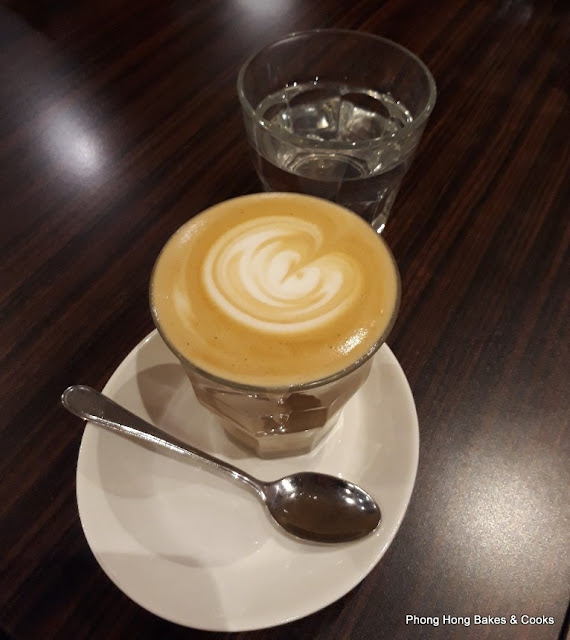 A Latte for uncle and grandma. Grandpa had Iced Lemon Tea while the Birthday Boy and his sister had soft drinks.

Now for the food. 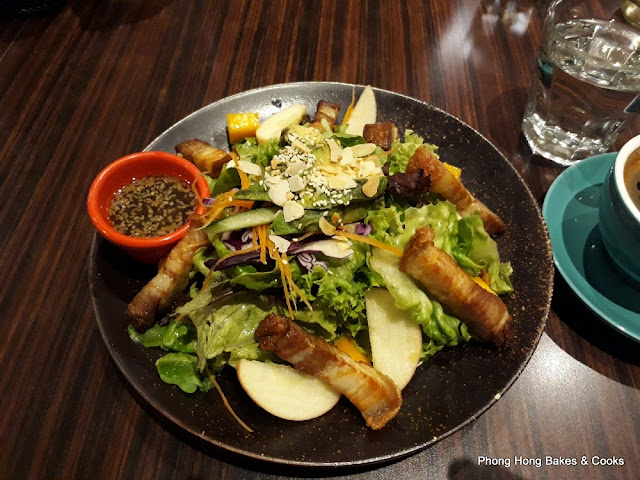 Auntie was on good behavior mode and had the Mummy Piggy's House Salad. Loved it! 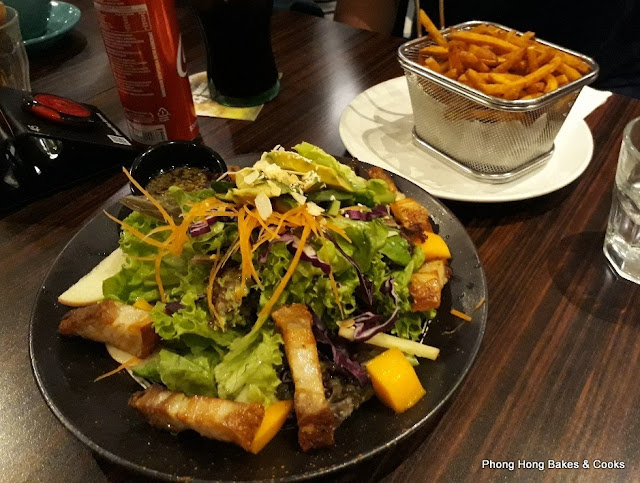 There was another order of the same salad and some fries for sharing. Eh, how come I didn't get any fries? heh...heh... 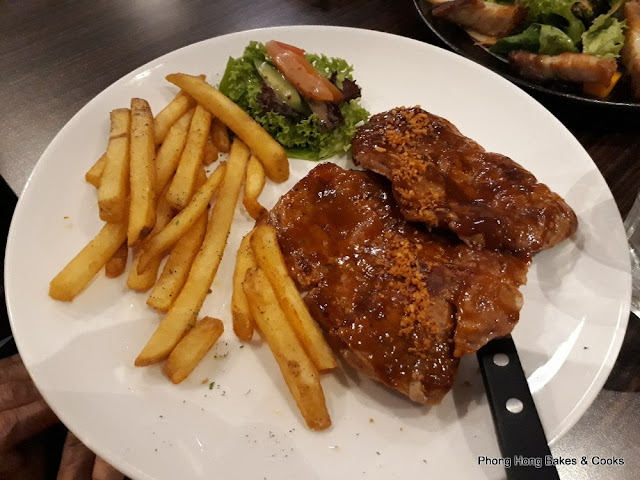 Grandma had Just Another Pork Steak and gave it her seal of approval. 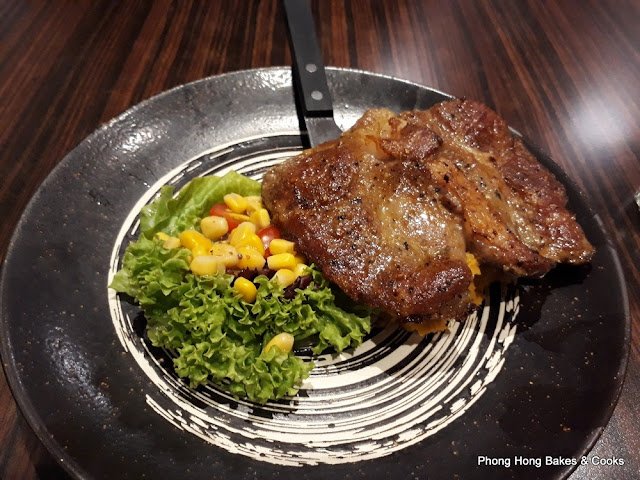 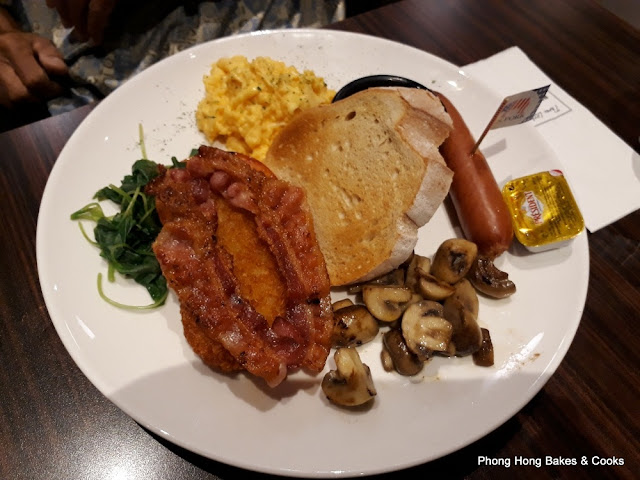 Grandpa had the I'm So Hungry I Could Eat a Wolf (big breakfast). 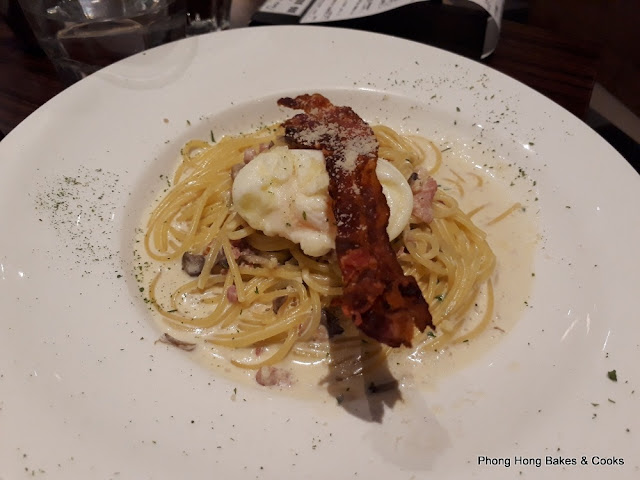 Uncle had the The Wolf's Favorite. 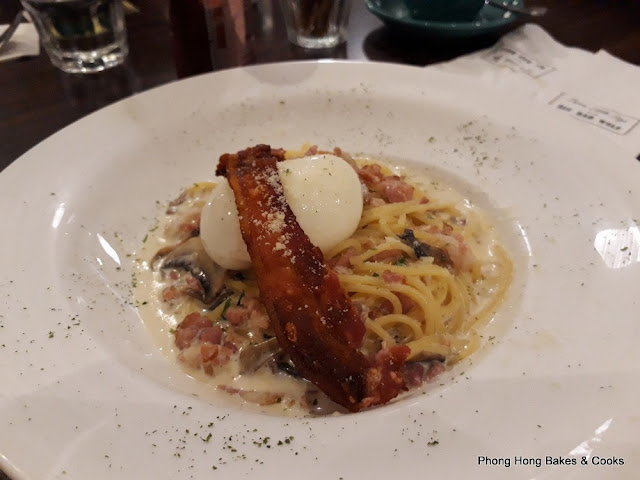 And so did Birthday Boy's mummy. 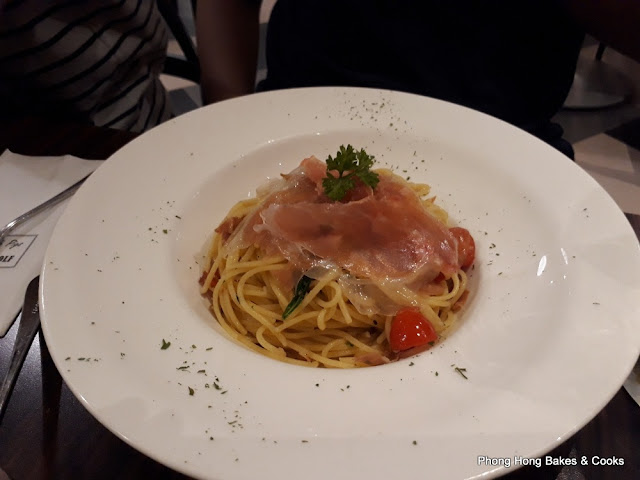 And this is the Birthday Boy's Prosciutto Parma Spaghetti. 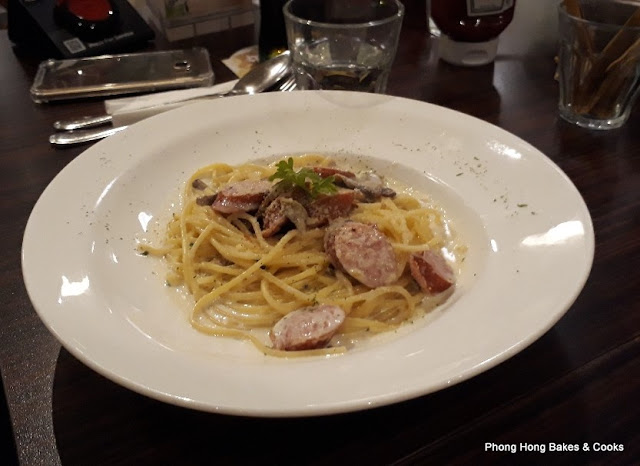 His sister's order of Sausage vs Spaghetti was forgotten by the kitchen and came out last after a reminder to the server.

When we were done with the food, my sister-in-law and my nephew went over to Baskin Robbins to get the ice cream cake. 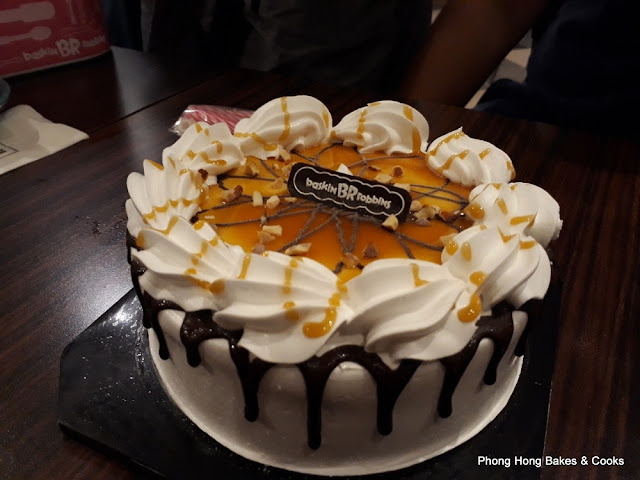 Ah........ we all love ice cream cake! While the cake was being sliced (it was frozen solid so my sister-in-law had to exert some muscle power assisted by her birthday boy), auntie and uncle decided that they wanted more coffee (since there was a buy one free one offer). 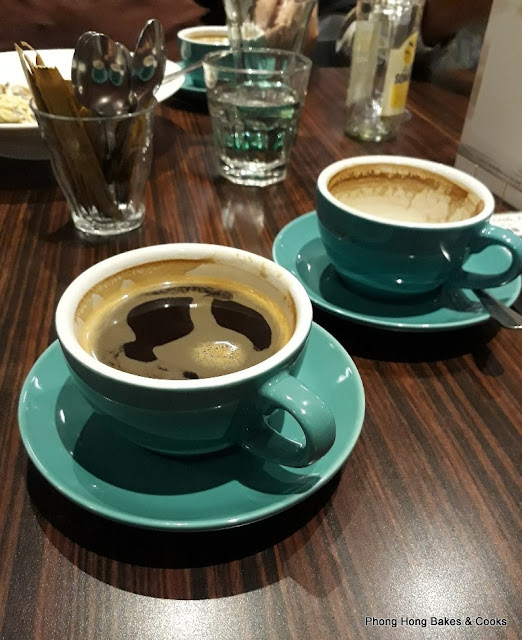 Coffee and cake work best together, don't they? 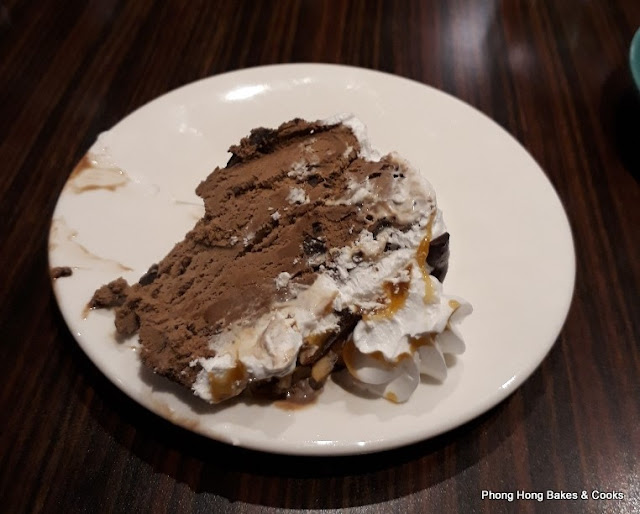 Well, that was a wonderful family gathering. And I went home feeling hyper after two cups of coffee. 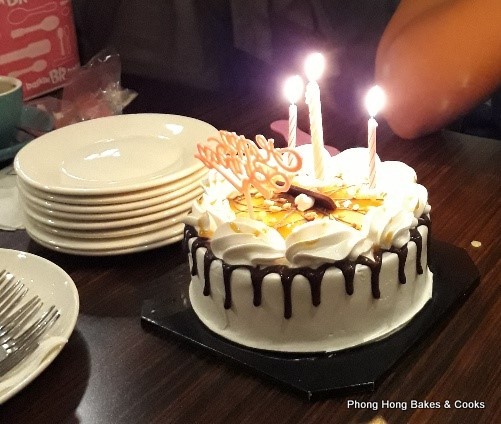