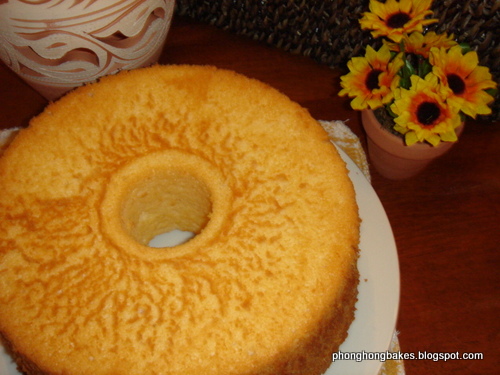 I tweaked my Pandan Chiffon Cake recipe to bake this Peach Yogurt Chiffon Cake. The use of peach yogurt was inspired by   Kimmy's Mango Yogurt Cottony Cake  which I tried here.

In my first attempt, I put 1 tub of yogurt (135ml) and noted that it wasn't enough. My egg yolk mixture became very thick after adding flour. I did not add another tub of yogurt at that point because it was in the fridge and adding a cold ingredient would not do.

I mixed some egg white mixture to lighten it up and folded the two mixtures together. The batter was thick and heavy but I baked the cake anyway. The cake did not rise very much in the oven. What came out was a chiffon with a rather dense texture. I could not detect any peach aroma but having said that, the cake was still edible. It was more like a sponge cake.

In the name of research and development, a second attempt was called for. This time with 2 tubs of yogurt. And it was perfect! The batter was light and smooth and rose beautifully in the oven. Not only that, the lovely peach aroma was present and the cake was light and moist. 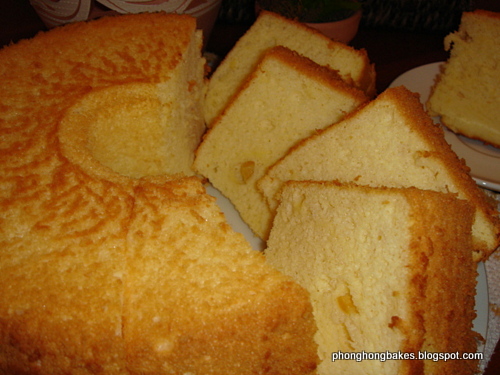 Another thing I did was reduce the sugar content to take into account the sugar in the yogurt. I was very happy with the result and I will try other flavours soon. 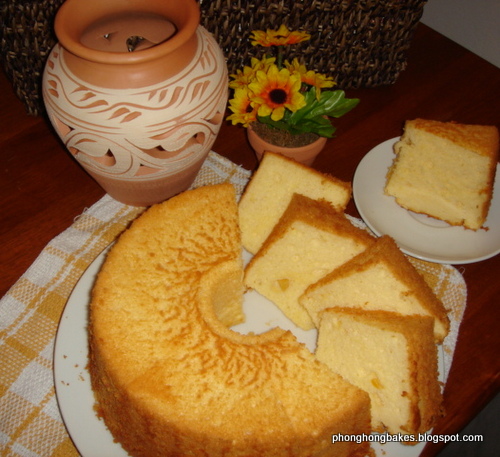 For Mixture A :
1. Whisk egg yolks with sugar to mix well.
2. Add yogurt and vegetable oil. Mix well.
3. Sift flour into the mixture and mix until a smooth batter forms.

Pour Mixture A into Mixture B and fold the two batters to ensure that they are evenly mixed. Pour into chiffon pan and bake for 45 minutes. When done, remove from oven and invert pan. Cool completely before removing from pan.