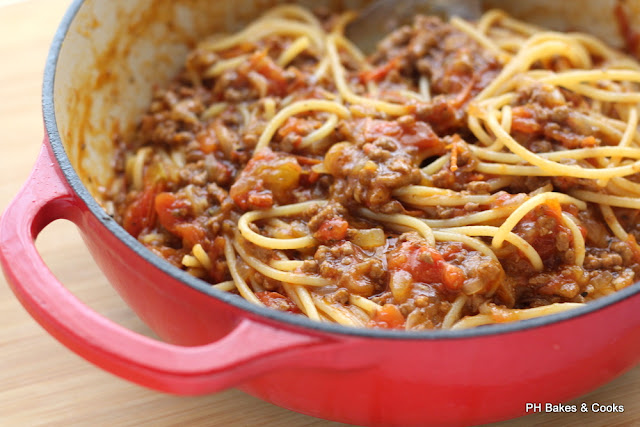 There is only one spaghetti sauce that I like, my Mum's. When I was growing up, one of my Mum's special treats is  her fabulous spaghetti.


When spaghetti was on the menu, it was a meal that my brothers and I looked forwards to. To us, it was so special and so delicious. One helping was not enough. 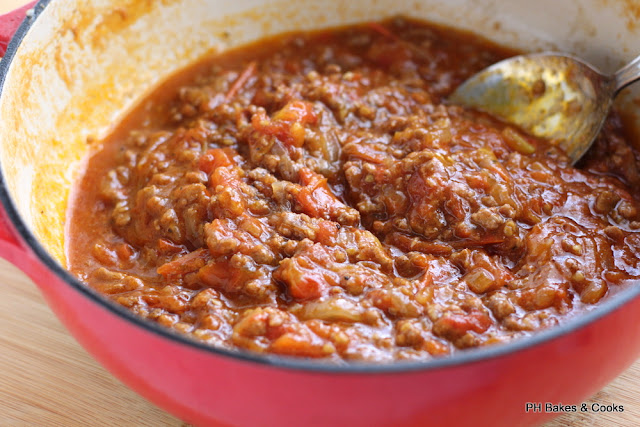 Fast forward many years later, I was at The Hilton and when I saw Spaghetti Bolognese on the menu, I ordered it immediately. No second thoughts. Memories of my Mum's fabulous spaghetti came to mind. Gosh I missed it so much!

But when the Spaghetti Bolognese was served, I'm afraid I was so disappointed. The taste was just flat and what made it worse was the sprinkling of parmesan cheese which made me wrinkle my nose.

I have had a few more pastas after that (and enjoyed none) and my conclusion is my Mum's recipe is not Italian wahahaha!! Of course lah. My Mum has been to Italy and she told me that over there their spaghetti "bo ho chiak lah" hah...hah...hah...

So you see, she modified the recipe and made it her own. No Italian herbs, no canned tomatoes and no cheese. Very simple only - minced beef, onions, garlic, fresh tomatoes, salt and lots of pepper. Besides, there were two secret ingredients - oyster sauce and tomato ketchup.

It's about time that I cooked her version of spaghetti sauce and relive the joy of eating Mummy's spaghetti. Yeah, a big pot, all to myself.

For that, my beautiful sendiri beli punya Christmas present was taken out of hibernation. 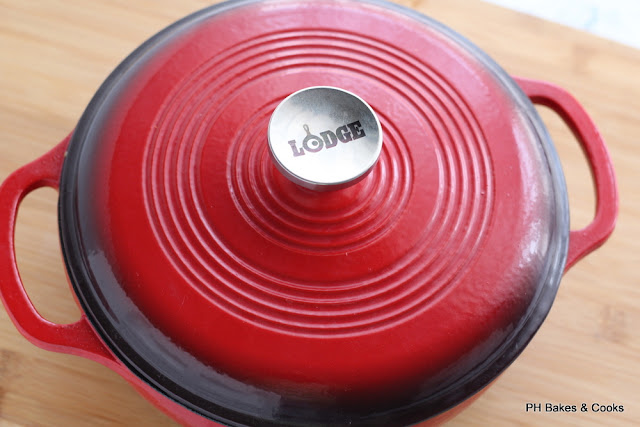 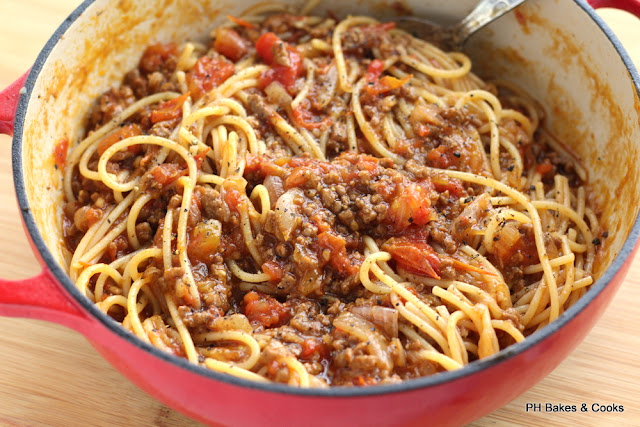 I used roughly 400g of minced beef to 1kg of fresh tomatoes. That seems like a whole lot of tomatoes but you do need that amount to get all the tomatoey goodness and there is no need to add water as you will only use the natural juices from the tomatoes. I dislike canned tomatoes because I cannot stand the taste and the smell. 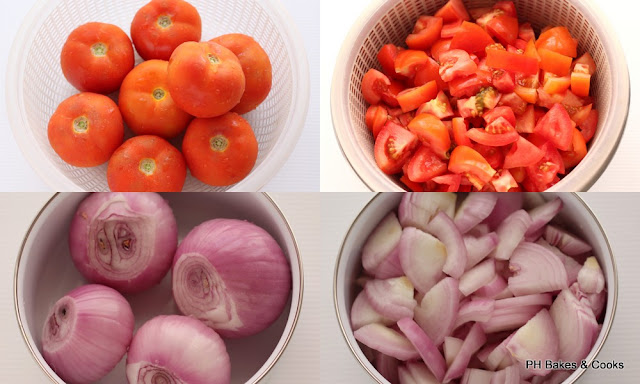 The amount of onions I used is approximately the same weight as the minced beef - 400g. More onions, more flavor! 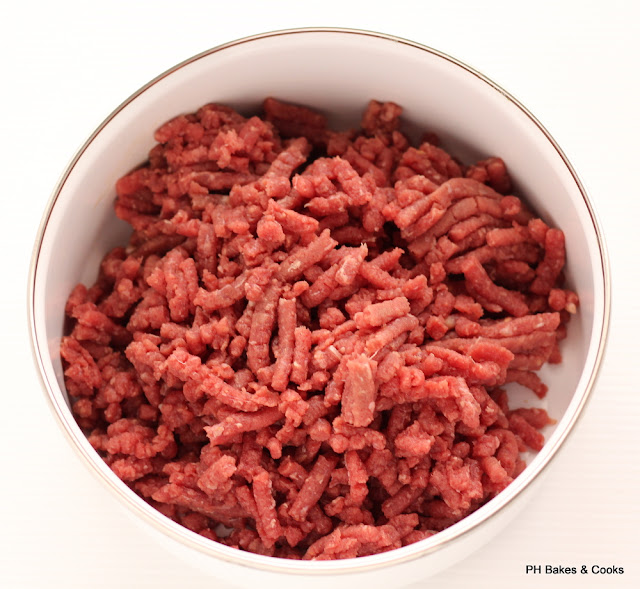 First up, brown the beef in some olive oil. 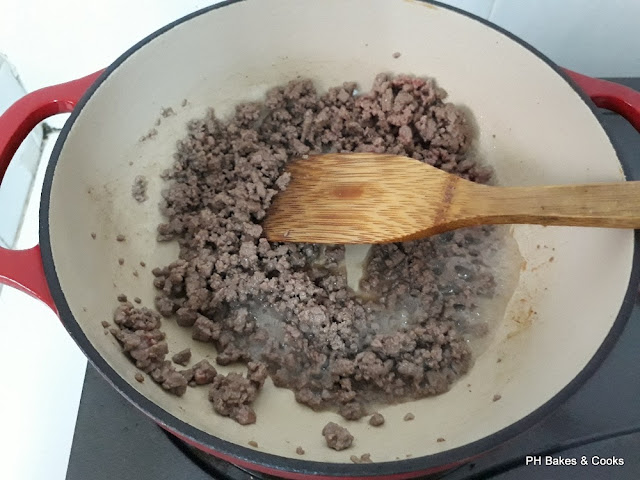 I did it on two batches as my Dutch oven is quite small. 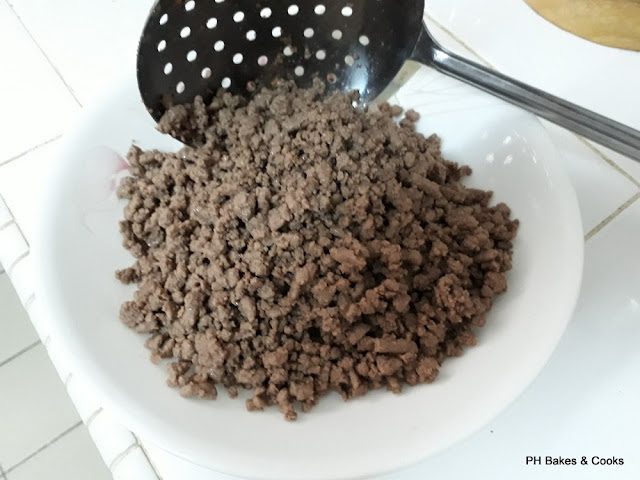 Then remove the beef and set aside. 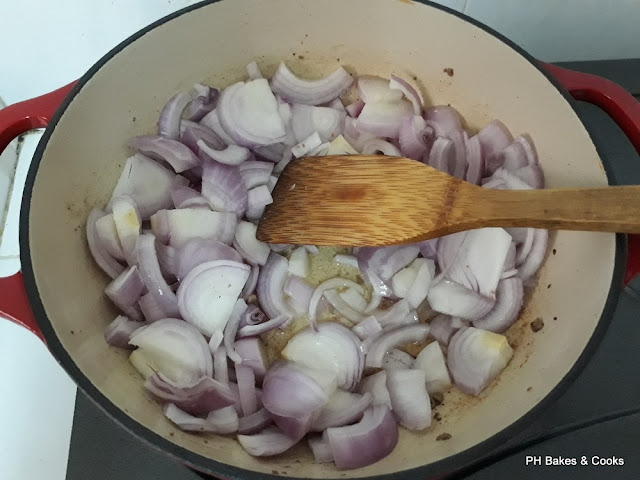 Add some more oil into the pan and sautee the onions until wilted. 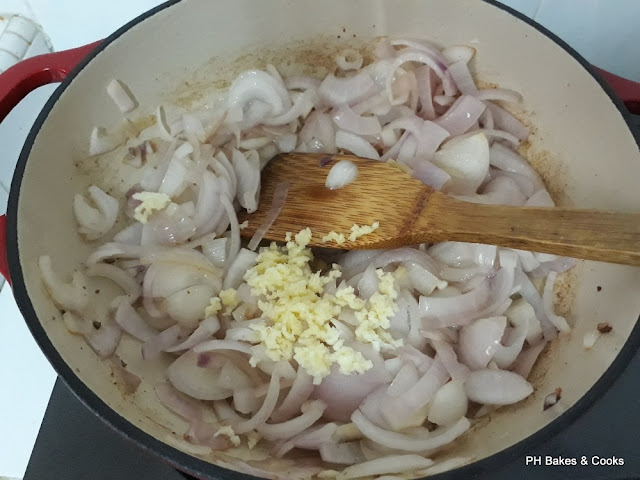 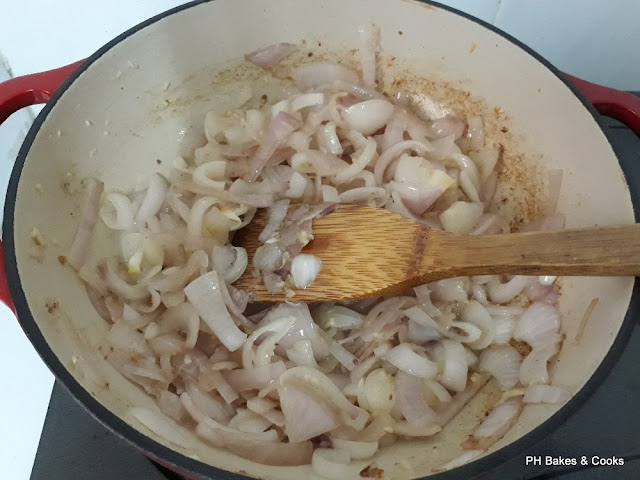 Once the onions are soft and aromatic, return the beef to the pan and add the chopped tomatoes. 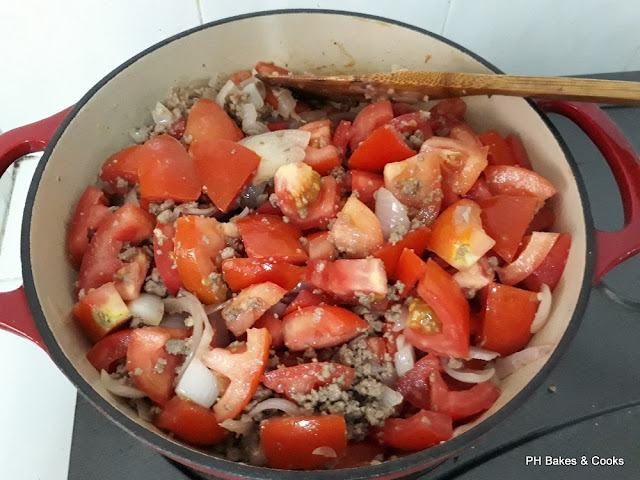 You can add some water if you like but I did not. I just kept stirring and added some salt. The tomatoes will release lots of juices. 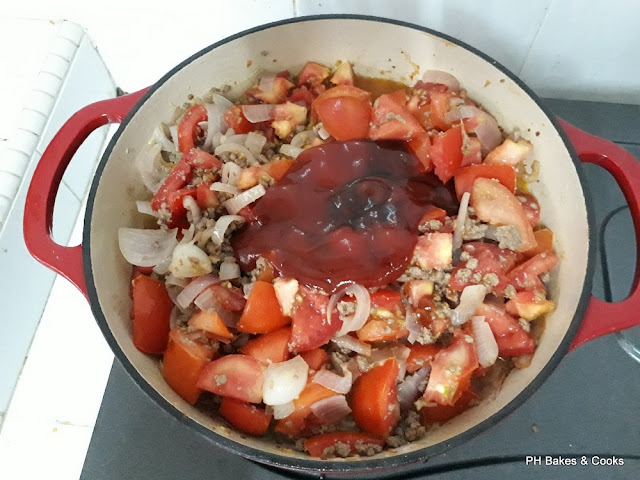 Add the sauces. I also added a small can of tomato paste (100g) to amp up the flavors. 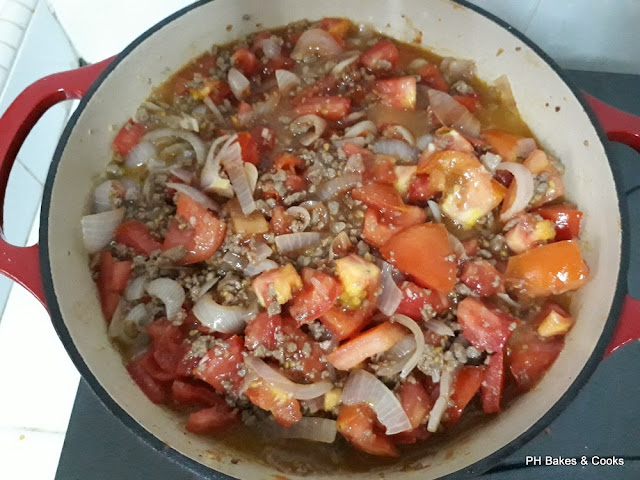 See? The juices are starting to come out. 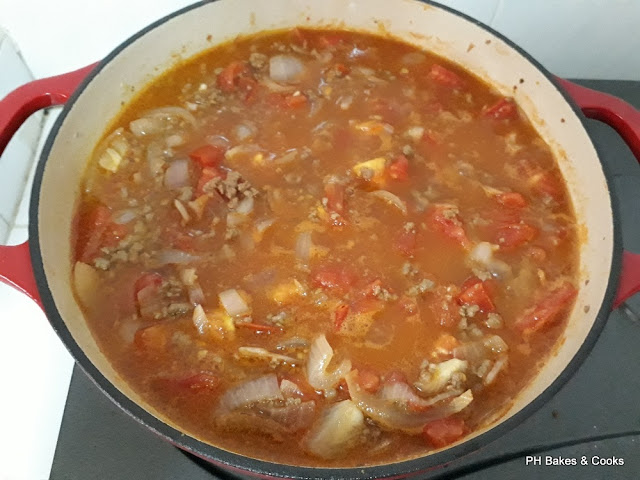 Lots of juices are released and at this point lower the heat and simmer covered for 30 minutes. Then for the next 3o minutes, leave a gap between the lid and the pot for excess liquids to evaporate . 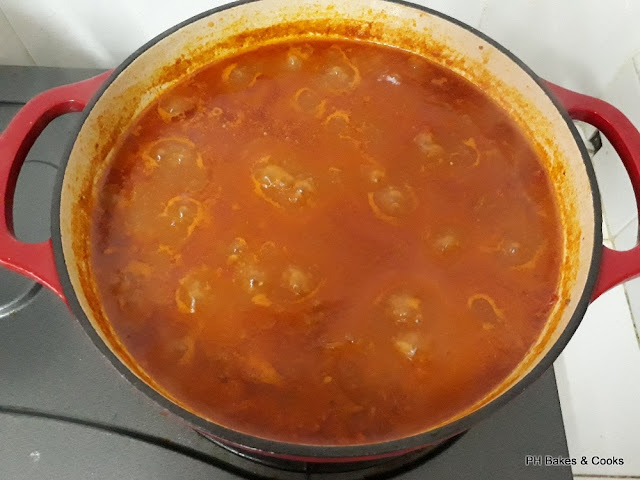 For the final 30 minutes, I simmered the sauce uncovered until nice and thick. Adjust for seasoning. 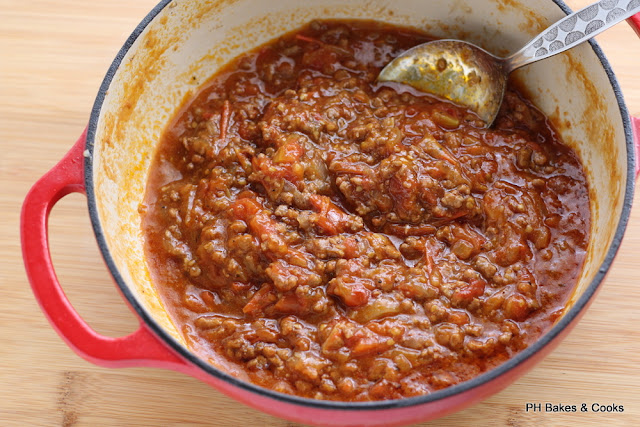 As for the spaghetti, after they are cooked and drained, my Mum likes to toss them with sauteed onions first. 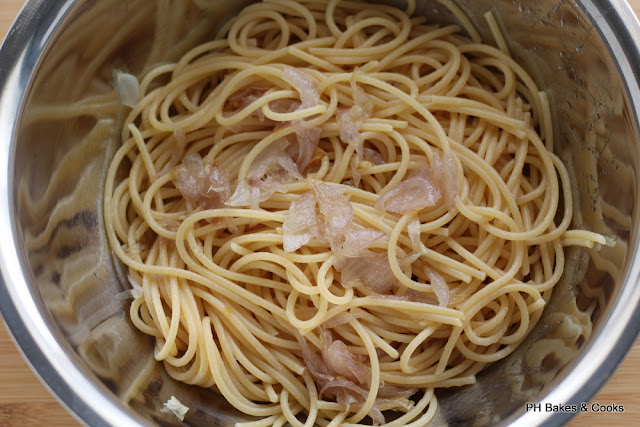 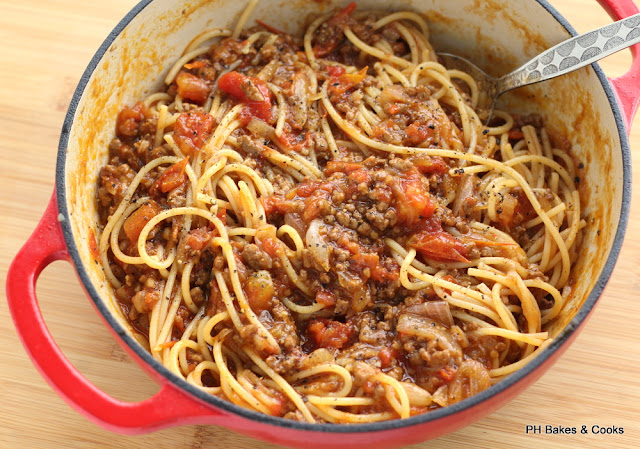 After that you can toss the oniony spaghetti into the yummylicious sauce and enjoy! I love to add loads of freshly cracked pepper for extra aroma and taste. 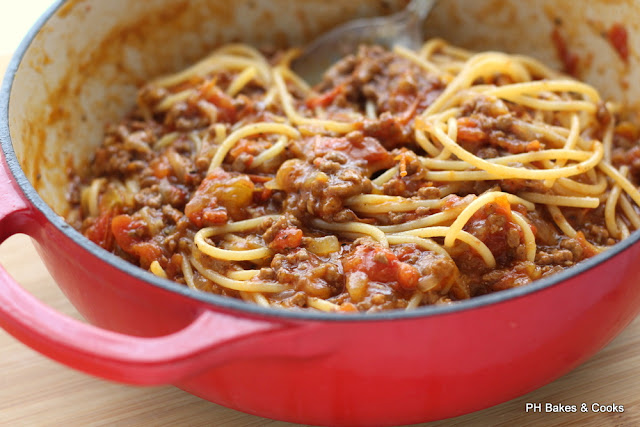 I am having this spaghetti again tonight for dinner. It never gets old. 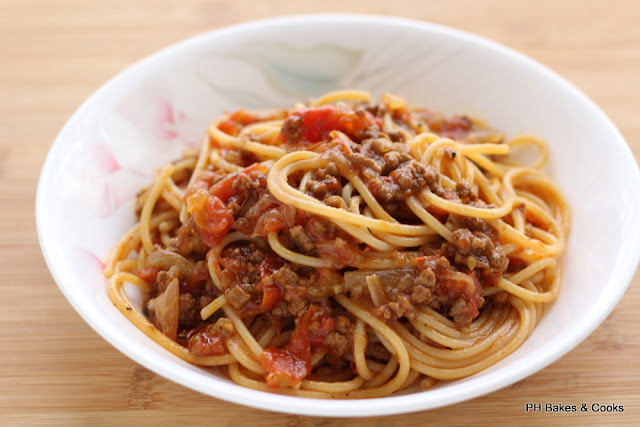 This recipe may not be to everyone's taste especially if you are already accustomed to the Italian version. But to me, this is the only pasta sauce that I enjoy. So who cares?

Method :
1. Heat oil in a pot and brown the minced beef. Remove and set aside.
2. Add some more oil to the same pot and saute the sliced onions until translucent and wilted.
3. Add minced garlic and continue to saute until the onions are very soft and aromatic.
4. Return the minced beef to the pot and add chopped tomatoes.
5. Season with some salt and stir the ingredients.
6. Add tomato ketchup, oyster sauce and tomato puree.
7. Keep stirring until tomatoes release lots of juices.
8. Lower the heat and simmer covered for 30 minutes. Stir every now and then to prevent burning at the bottom of the pot.
9. For the next 30 minutes leave a gap between the pot and the lid to allow excess liquids to evaporate. Stir every now and then.
10. For the last 30 minutes, simmer uncovered until the sauce is thick. Taste and adjust for seasoning.
11. Serve with any pasta of your choice. 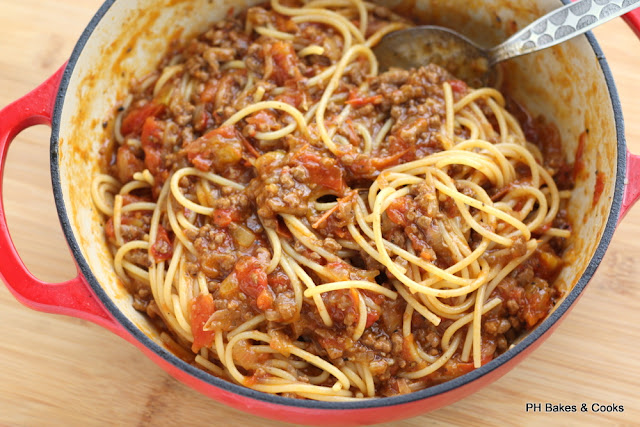