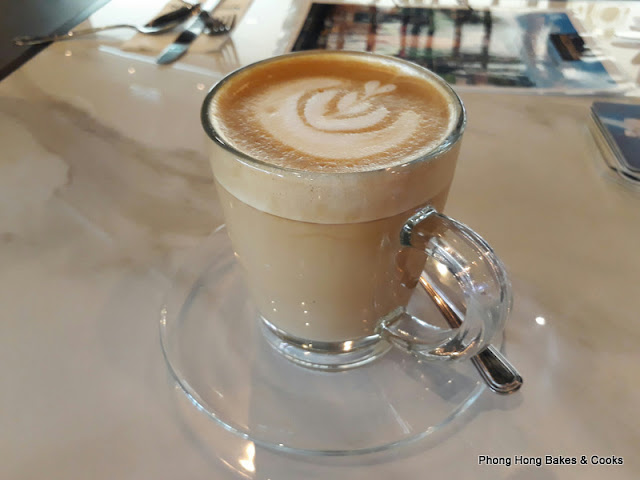 It was nearing the weekend and I wanted to watch a horror movie. Stress relief lah as I had to work that Saturday. I usually book my ticket a day or two earlier but for this movie I hesitated.


I wanted to ask my brother to come along but I wasn't sure if the movie was good. If it wasn't, then I would be wasting his time.

Since this was a hantu movie, I had to make sure that there were other bookings in the hall before I made mine. You see, when I watched Wonder Woman, I was the only person in the hall. So I kept checking the bookings but no one seemed to be buying the tickets. Bah!

Then my brother paid me a visit and we made a date. Safer to go to a scary movie with a companion hee..hee....

Of course, no date would be complete without some makan first. 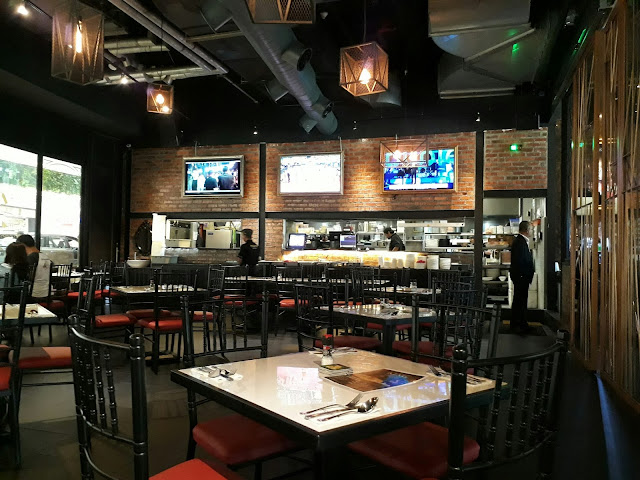 We decided to visit Nicsmann by Lewre@The Starling because our sister-in-law gave it good reviews. The menu appears to be quite extensive offering anything from Western to Asian fare and some very attractive meat platters. 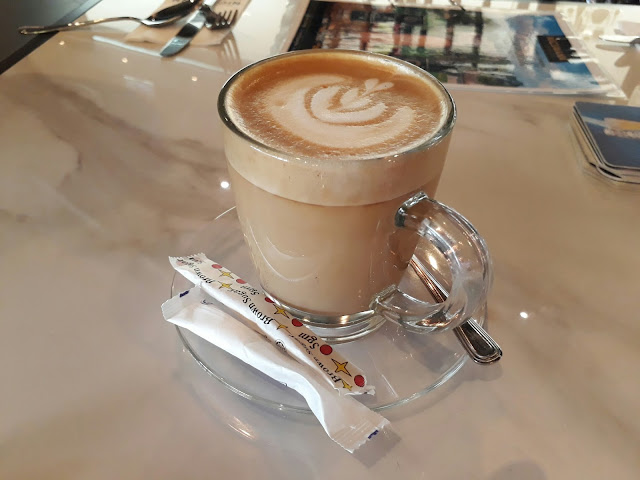 As usual, my brother had the Cafe Latte. It came with two packets of sugar which ended up in my handbag. 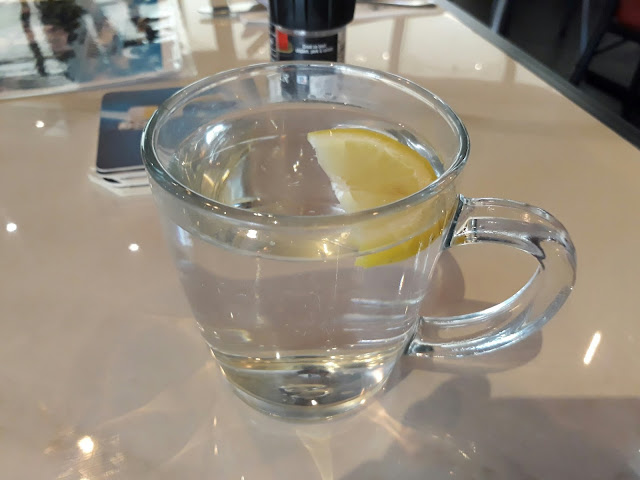 I was still suffering from the after effects of a late lunch at Home Kitchen the day before (I felt bloated), so I settled for warm water. I suspect Home Kitchen is no longer as healthy as they claim to be and some of their dishes now taste of heavy seasoning. Sorry, I digress. 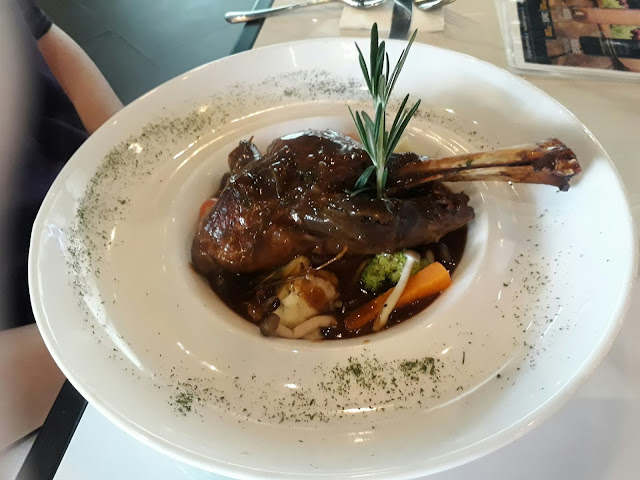 My brother opted for the Braised New Zealand Lamb Shank. It was of a good size and very meaty. 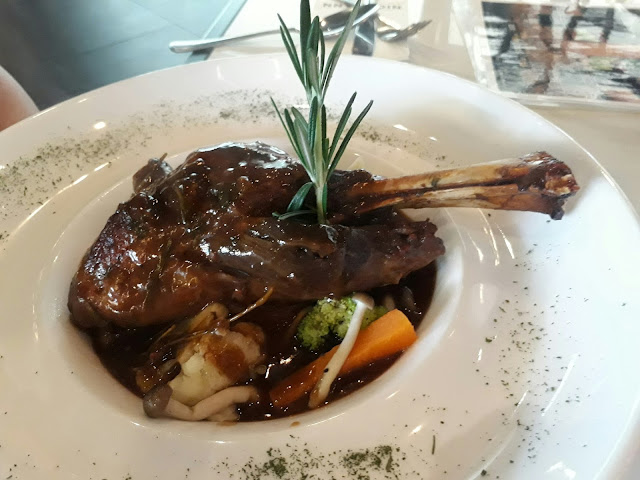 I tasted a little bit and I thought it was good. The meat was very tender and falling off the bone. Flavor wise it was very pleasing and in terms of portions, I would say it is good to share for small eaters. 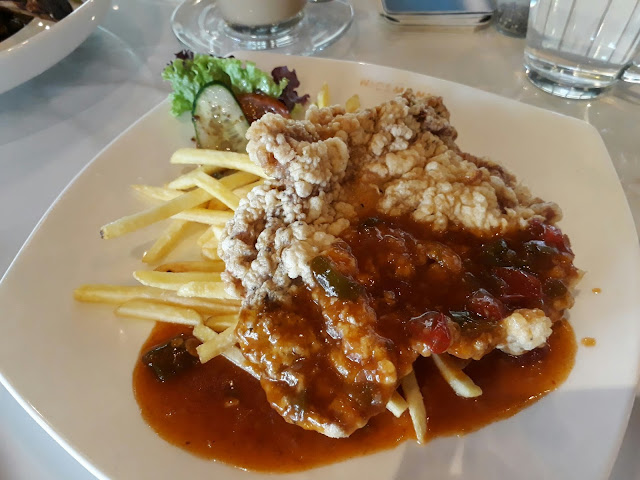 Of all things, I chose the Hainanese Chicken Chop, a weakness of mine (one of many actually). If it's on the menu, I want it.

The chicken leg was heavily battered and unfortunately the batter was slightly undercooked. It was still a bit doughy on the inside and would have done better with a few more minutes in the fryer.

The size of the chicken leg looks impressive but if you remove the batter, it's actually quite a modest portion. 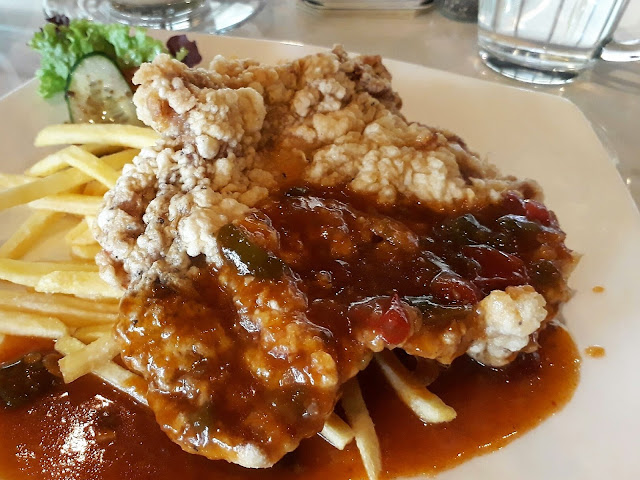 As for the sauce, I was disappointed because it tasted heavily of ginger. The ginger overkill spoiled the sauce for me.

I will still come back to try other items on the menu and hopefully my next choice would be something lots better.

After our meal, we went upstairs to MBO for our date with this girl : 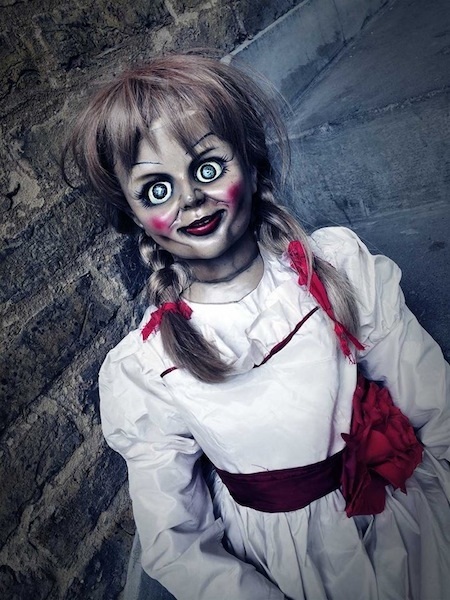 Having watched the first movie, Annabelle (which I thought was less than stellar), I went in without any expectations and was surprised that Annabelle : Creation did deliver the scares. It's not fantastic but much better than anticipated.

After the movie, I went back to work and Annabelle : Creation was a distant memory. The younger me would have been spooked for days, well, not anymore.

Until on Sunday, when my mum recalled how she and my aunties (when they stayed at the old hospital quarters) used to hear dragging sounds from under the bed where my youngest auntie placed her doll. Great. 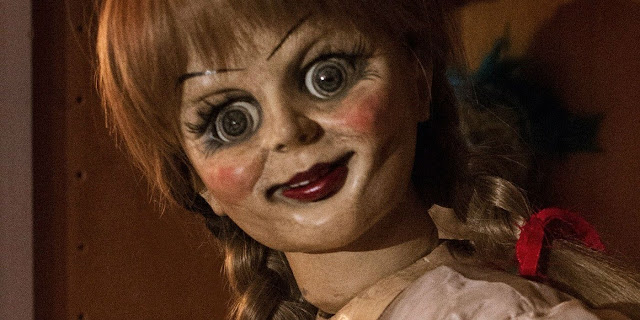