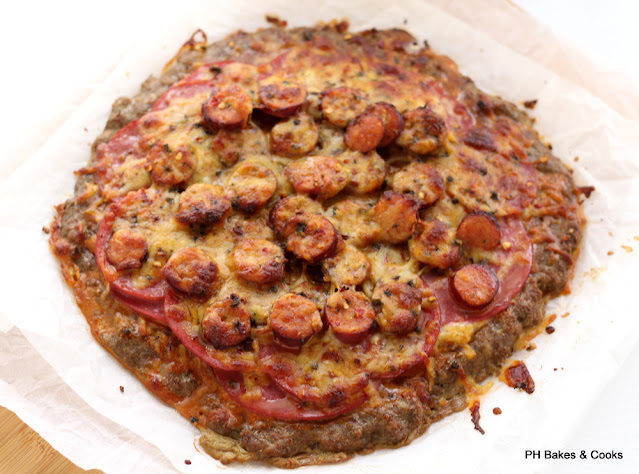 This is a meat based pizza. The only difference between this and conventional pizza is (1) the crust is made from meat and not flour and (2) the sauce is made of egg yolks instead of tomato.
Basically there are two components to a pizza - the crust and the topping. I find that the tricky part is the crust. In a conventional pizza it is even trickier and a lot more work. Imagine having to knead the dough, wait for it to rise and then work on making the pizza base. That takes hours, right? 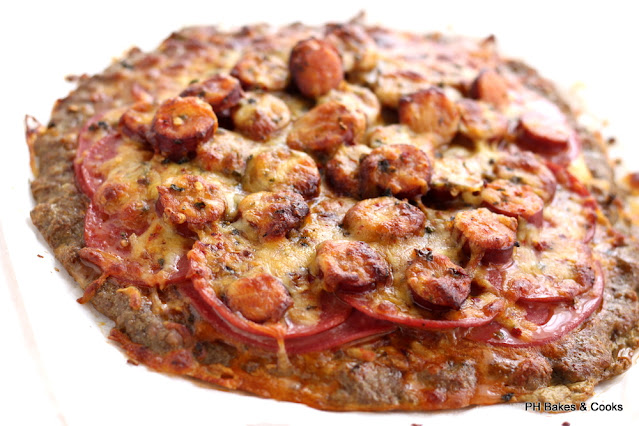 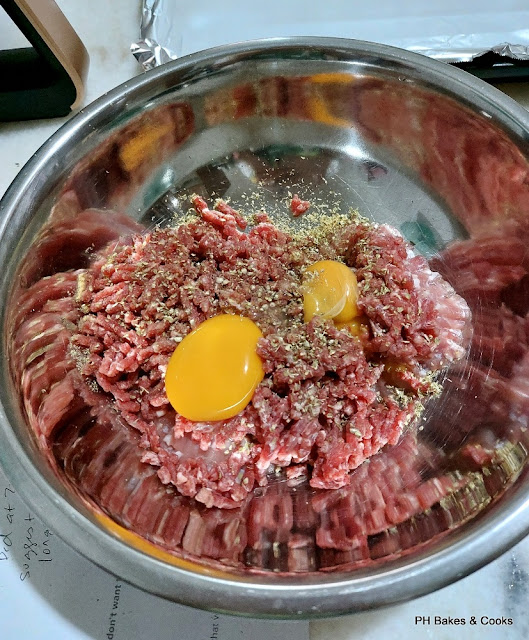 Just mix everything up until the mixture becomes sticky and comes together. Like a dough. Yeah. Transfer the mixture onto a baking pan lined with baking paper. Spread the mixture out to make a pizza base. You can make it as thick or as thin (not too thin though) as you like.
I find that I prefer a thinner crust. You can see my first attempt here where I made a thicker crust. 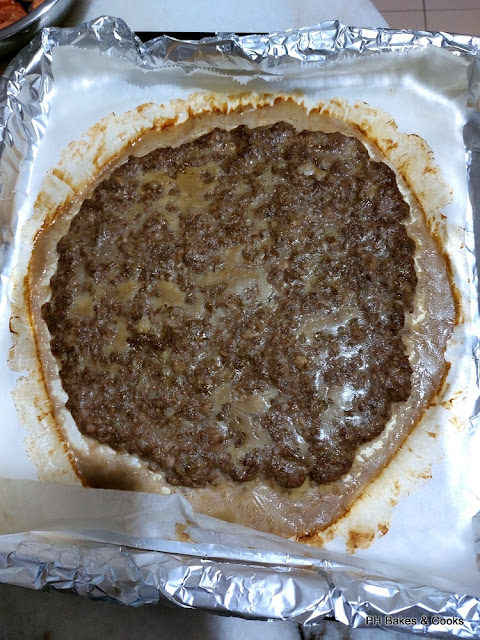 Then bake the meat crust in the oven at 200 C for 10 minutes. Notice that there is a lot of moisture seeping out of the crust. What I did was I tilted the pan carefully to allow the moisture to flow away from the crust. 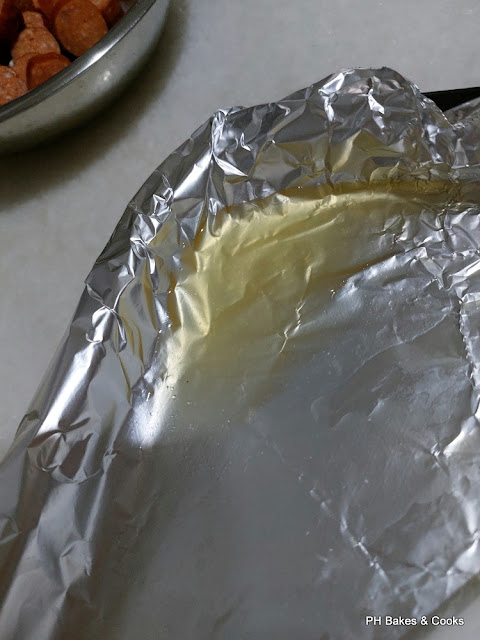 See the amount of water collected at the edge of the pan? 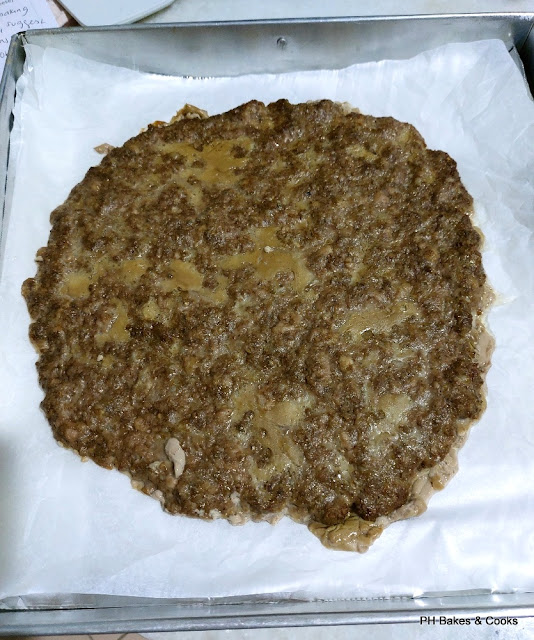 Then I transferred the base onto another lined pan. It is quite a tricky maneuver. 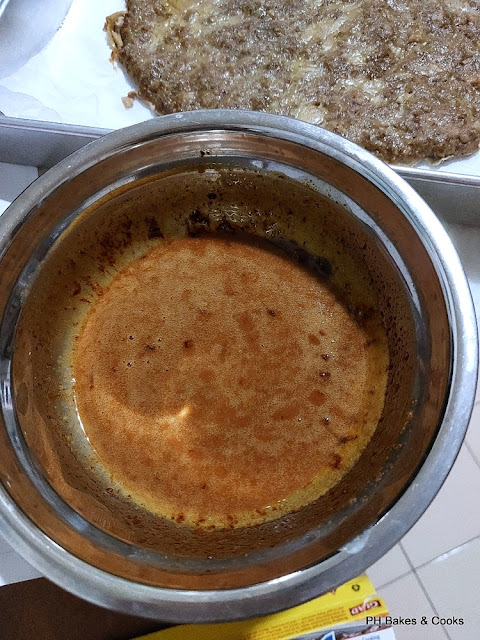 This is the pizza sauce. It is just egg yolks and paprika powder. I did not add any salt. 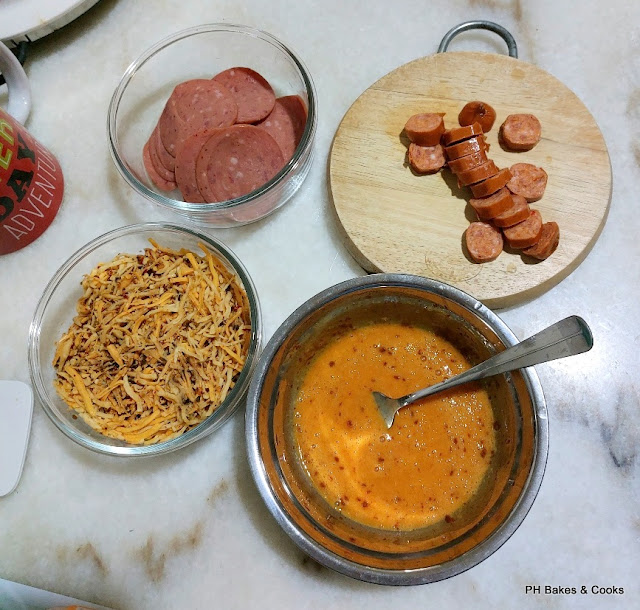 So these are the ingredients for the topping. This photo was from my earlier attempt. 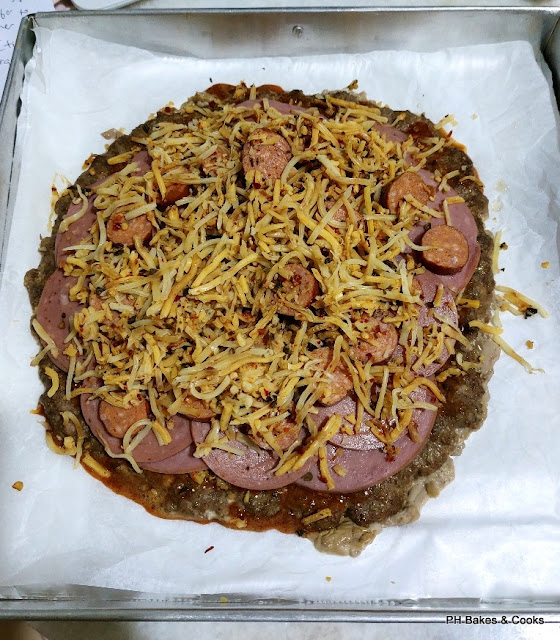 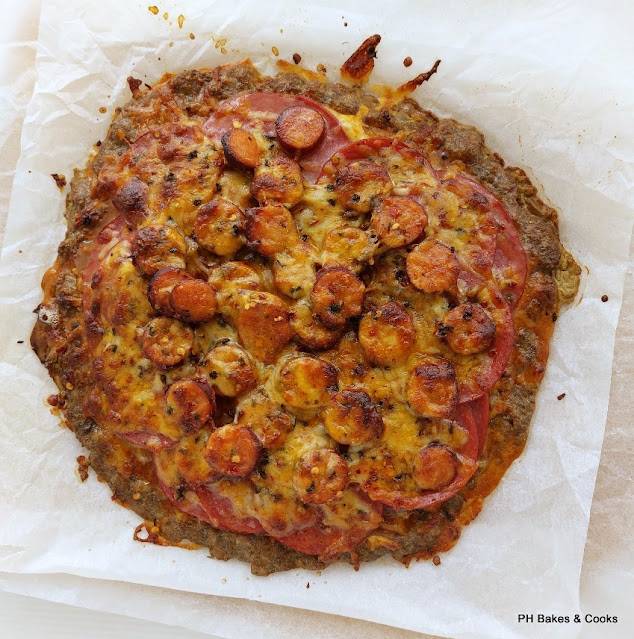 See, no extra moisture from the pizza unlike the one from my first attempt. 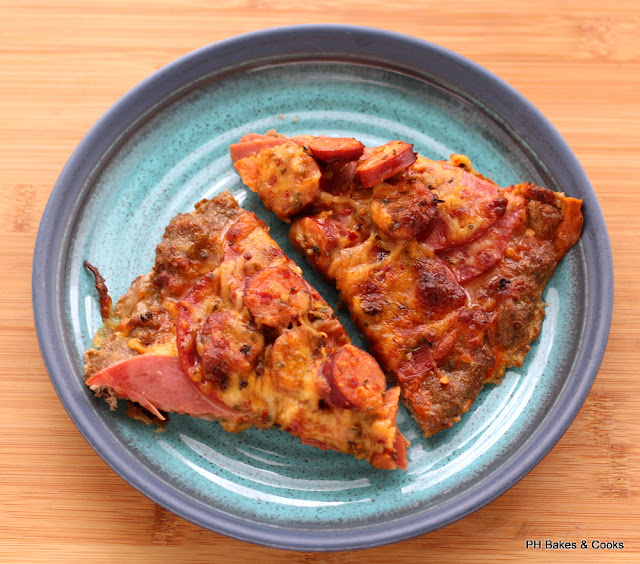 This pizza tastes just as good as any pizza. I mean, as long as your toppings are tasty, your pizza will be vavavoom!
As for the crust, well, it is meaty of course and very unlike the carbohydrate version of course. I did not mind it at all and this is why I prefer the crust to be thinner so that it is not too heavy. 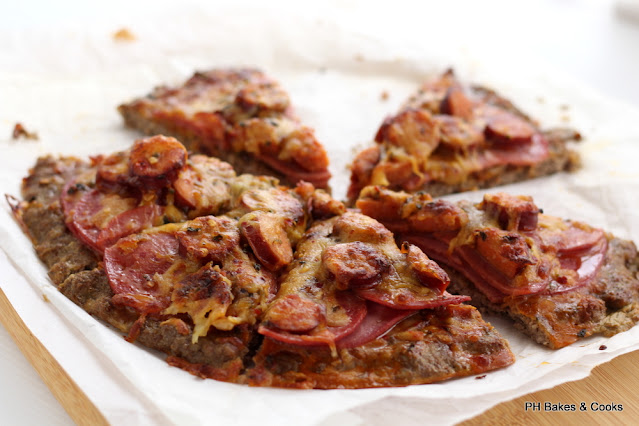 The one I made earlier with a thicker crust looks like this. 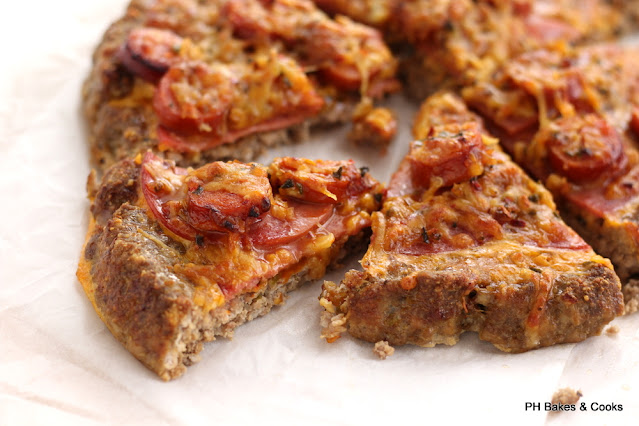 Now, this recipe I adapted from Greek Goes Keto and I was really stoked when I watched this video :
This is the cheese that I used. The parmesan for the crust. 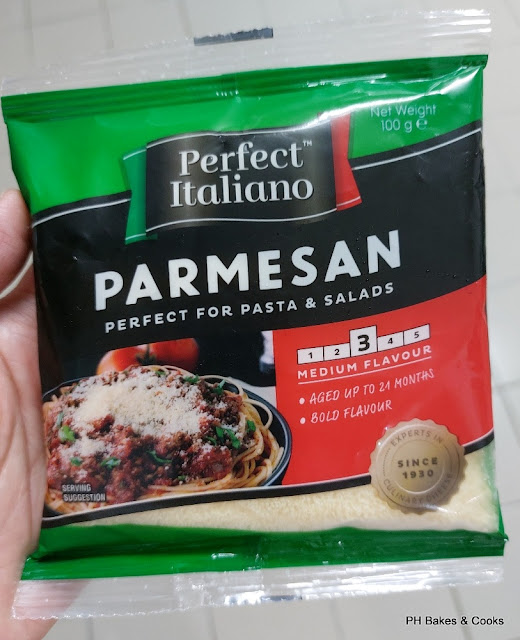 And something like this for the topping. The one I used was a Tex Mex variant that contained added spices. 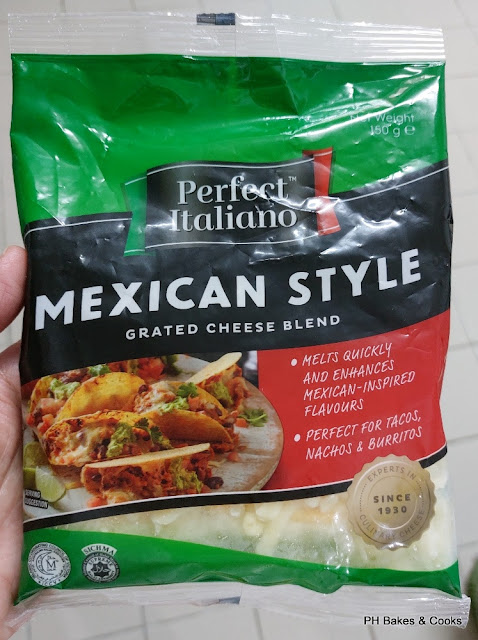 And here is the recipe.
Carnivore Pizza
Recipe source : Adapted from Greek Goes Keto
Note : Prepare 2 lines baking pans. One for initial baking of the crust and the next one is to transfer the baked crust to after getting rid of excess moisture from the initial bake.
For the pizza crust :
- 250g minced beef
- 200g minced pork
- 1/2 cup parmesan cheese
- 2 egg yolks
- black pepper to taste
- 1 tsp dried oregano
- 1 tsp garlic powder
Note : I did not add salt because parmesan cheese is salty enough for me.
For the sauce :
- 3 egg yolks
- 1 tsp smoked paprika
For the topping :
- Beef pepperoni
- Spicy sausage
- Shredded cheese
Note : I did not put any amounts, use enough to fill your pizza.
Method :
To make the crust :
1. Very easy. Mix all the ingredients together (I used my hand) until it becomes sticky and comes together.
2. Transfer the mixture onto a lined pan and using your hands, spread the mixture to create a pizza crust. The thickness of the crust is up to you. I prefer thinner.
3. Bake in a preheated oven at 200C for 10 minutes.
4. You will notice lots of liquid coming out of the crust.
5. Tilt the baking pan carefully to drain the liquids.
6. Transfer the crust to the second lined pan.
To make the sauce :
1. Simply beat the eggs yolks and smoked paprika until well combined.
To assemble the pizza :
1. Spread the sauce all over the crust.
2. Add shredded cheese to cover the entire surface of the crust.
3. Arrange the pepperoni and sliced sausages on top of the cheese.
4. Top with more shredded cheese.
5. Bake at 200C for 10 minutes or until the cheese is melted. 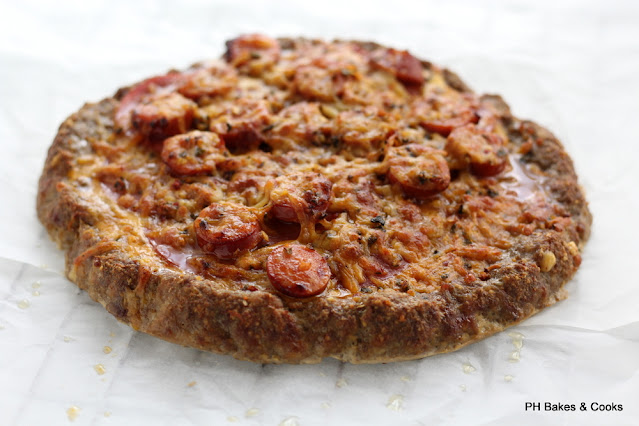