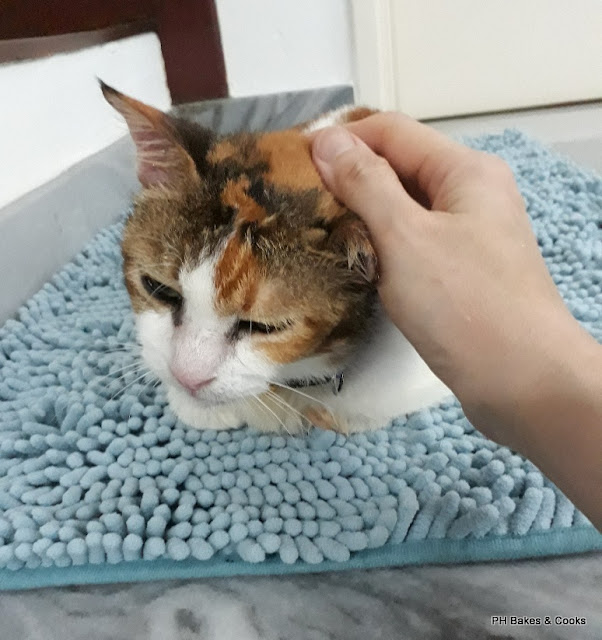 When Belle came into my life, I knew it meant a new level of commitment, added responsibilities and the possibility of upsetting Girl.
But I couldn't turn away this little kitty who looked so forlorn when she first appeared at my car porch. 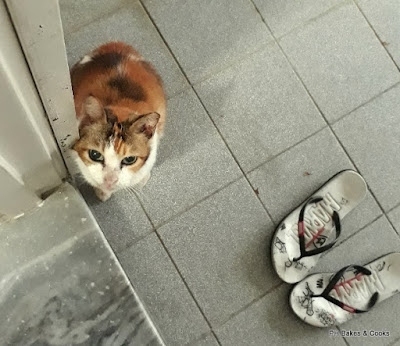 She just melted my heart (I'm a softie for kitty cats anyway) and I could not turn her away. 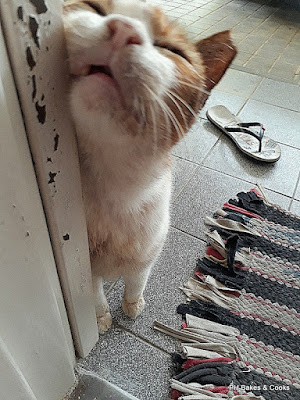 My initial intention was to get her checked by the vet and then let her live in my car porch.
After the first visit to the vet, I decided to let her live inside. All seemed well except that Girl had a hard time accepting another cat sharing her space. There was all the whining and acting up which thankfully simmered down with time, patience and understanding. 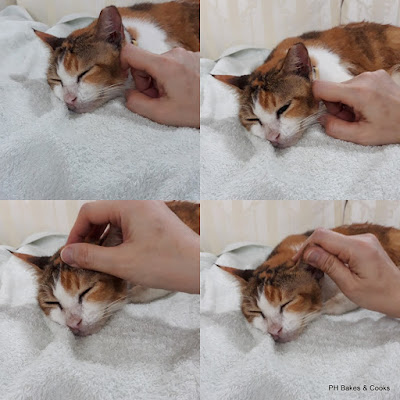 But Belle has some health issues. Namely an ear infection and a skin condition that caused her fur to become wet (and stinky). I pointed this out to the vet on the first visit but somehow this matter was overlooked.
You can see from this photo that her fur on her chest is matted. 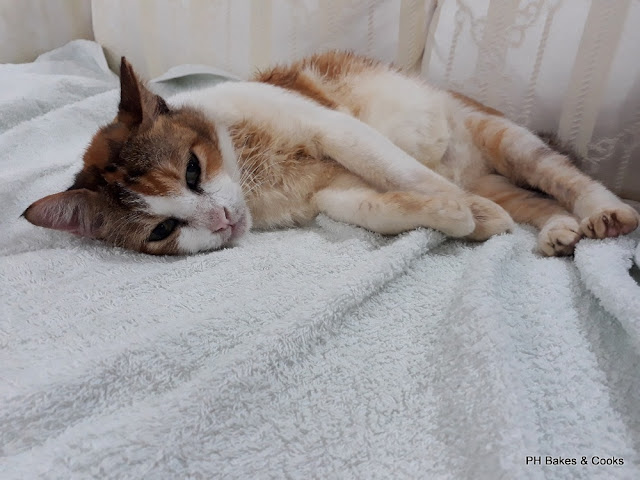 There are other parts of her fur that are of the same condition. 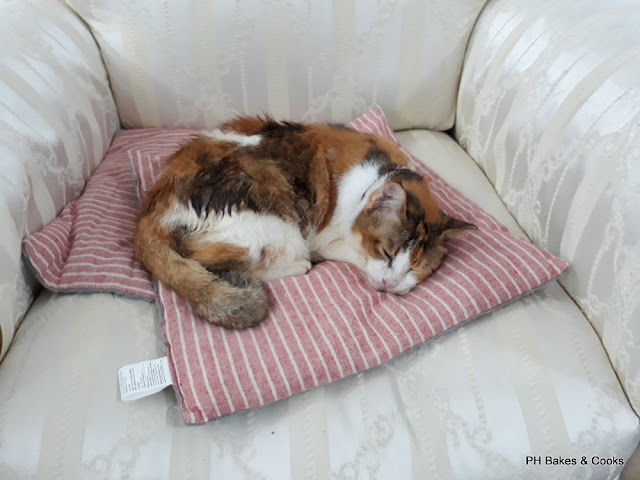 All this time Belle was lethargic and slept most of the time, getting up only to feed (she has a good appetite) or use the litter box. 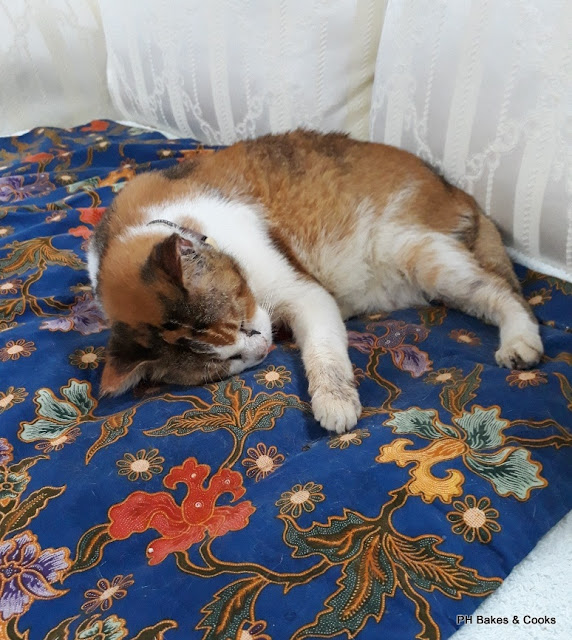 I went to the vet (without Belle) with photos of her damp fur. The vet suggested that it could be saliva when she grooms herself (surely it can't get so wet) or urine (this I was sure was not the case). So I brought her in for another consultation. 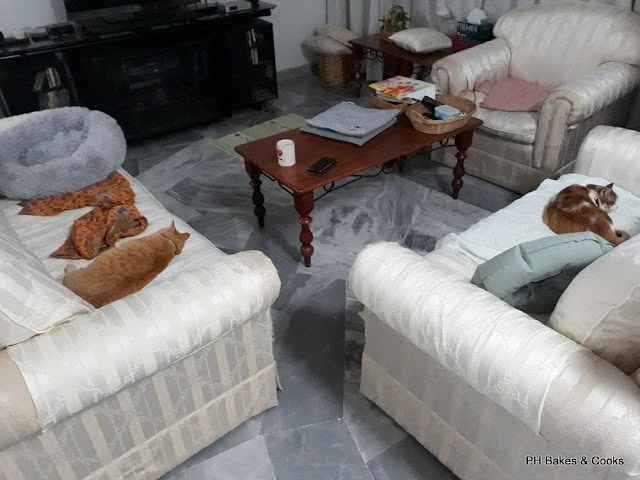 It had been 2 weeks since her first appointment and she had been sleeping on all the sofas/armchair hence contaminating all surfaces.
I had to make a difficult decision to quarantine Belle outside so that I could clean up and disinfect all the cushion covers. But not to worry, she has a comfortable place to stay. 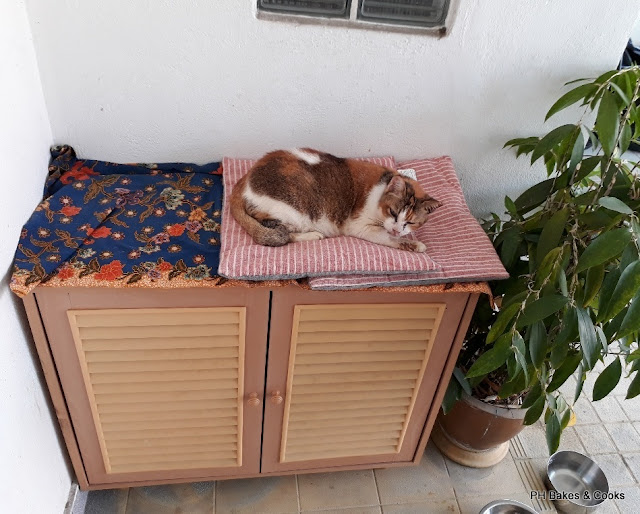 I took the sarong and her favorite cushions outside so that she has something familiar to sleep on. I also took her litter box outside. 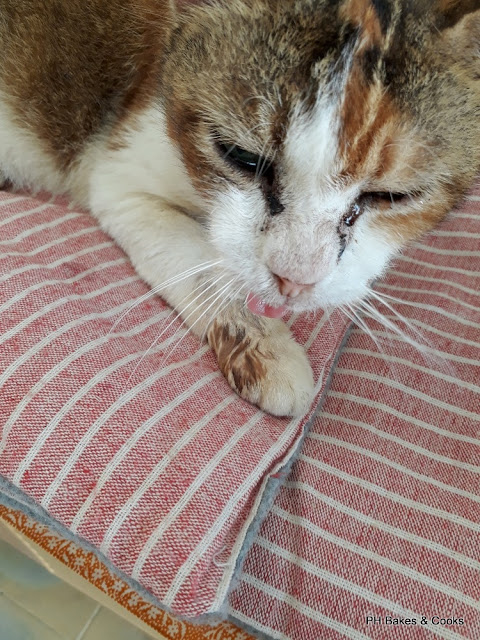 At this point, even her paw was affected and she had liquid oozing from her eyes.
When the vet next examined her (using UV light) he diagnosed fungal infection (I do wish he had detected that on the first visit) and noted that her ear infection had gotten worse. She also had a gum infection that made her drool.
Belle was given another bath and prescribed with medication and ear drops. It was a monumental task getting the tablets down her throat as she spat them out a few times.
She was also uncooperative when the vet applied the ear drops. Gosh. What a struggle! How was I going to cope back home?
Well, I had to crush the tables into powder and mixed it into her wet food. At first, she refused to eat as she could taste the medicine. I was very frustrated but I told myself that she will have no choice but to eat when she gets very hungry. It worked.
As for the ear drops, I simply had to grab hold of her and forcefully put the dropper into both her ears. It was the only way. This I had to do twice a day. I continued to quarantine her outside.
She seemed to have recovered, no more wet fur and her ears appeared clear. She was also more energetic and active. But a week later, I detected a wet spot on her chest! Oh no! I immediately took her to the vet again.
At the vet's the wet spot had dried up and after examining her he concluded that she did not require further medication but prescribed anti-histamines to stop itching (she scratches her ears often). Her ears were still not fully recovered and I was to continue with the ear drops.
That day also happened to be the day that there was another unscheduled water disruption (gah!) and it so happened that that evening a fogging exercise was to take place due to a dengue case in my housing area. So I had to bring Belle inside the house for her safety.
I had bought a new rug recently and guess who made a claim for it? 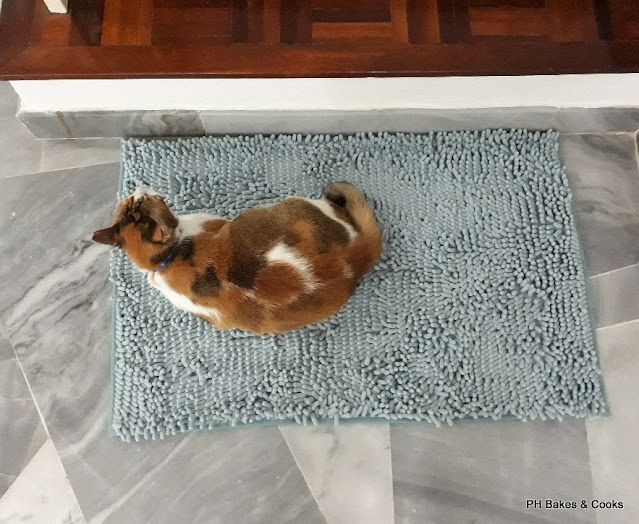 Yup, she found a sweet spot for herself right away, much to Girl's annoyance. And you guessed right, that evening I had no peace. Belle helped herself to a spot near Girl upstairs at bedtime. Girl was having none of it and came downstairs whining. 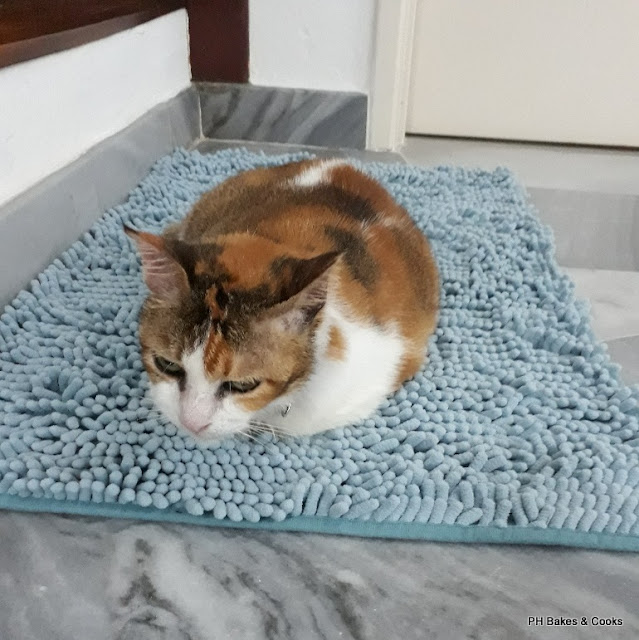 I had to carry Belle to the sofa to settle her down for the evening while Girl went back upstairs. Haiz....
As at the time of writing, Belle is still residing outside. I actually feel guilty about this and my partner remarked that he feels sorry for Belle.
Belle does not seem to mind living outside and has not made attempts to come back inside (she does dash in at feeding time). After all, she has a cosy corner to sleep.... 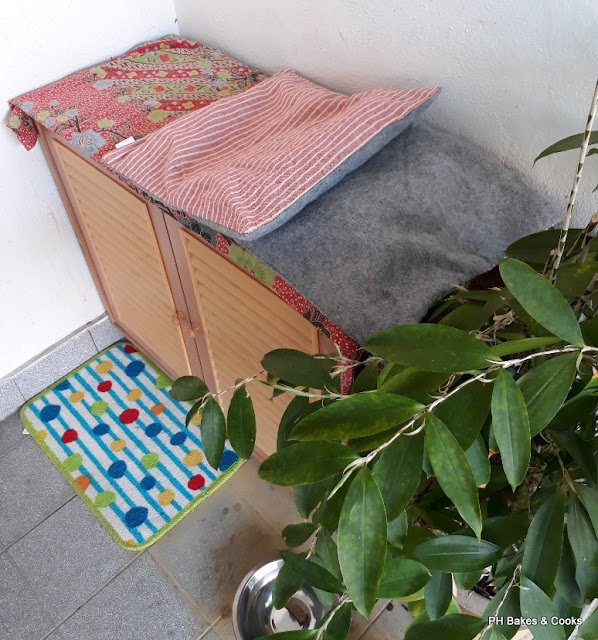 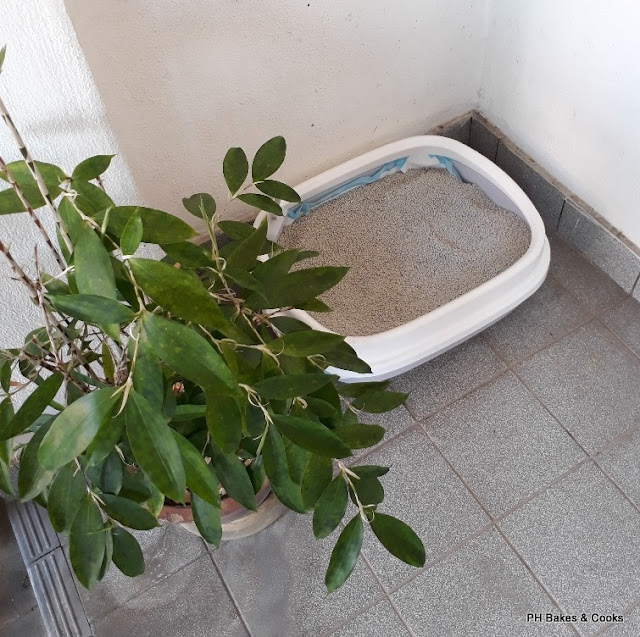 ... plus a comfortable spot to lepak-lepak. 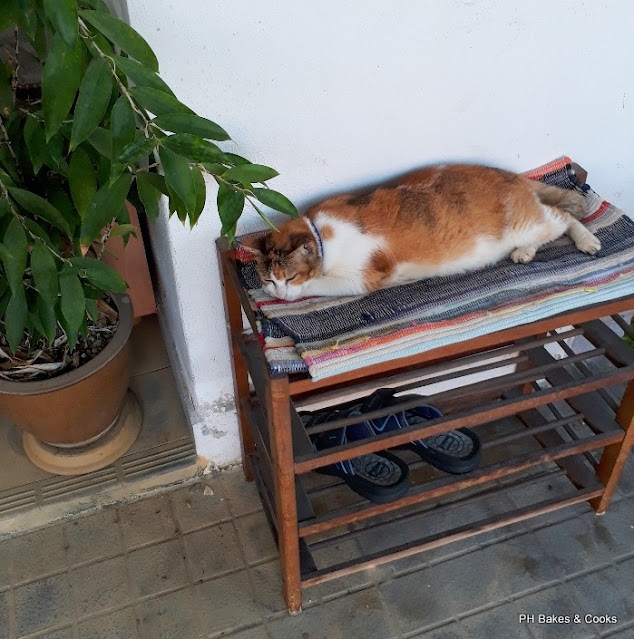 Belle still has food, shelter and my attention. In a way I prefer her outside as she is quite messy/clumsy with the litter box and she always gets into Girl's way. 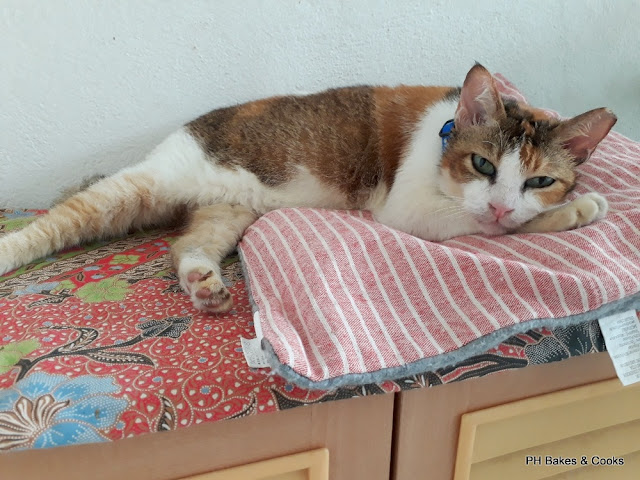 Even outside she encroaches on Girl's territory. I had set up a nice spot for Girl to lepak-lepak outside. 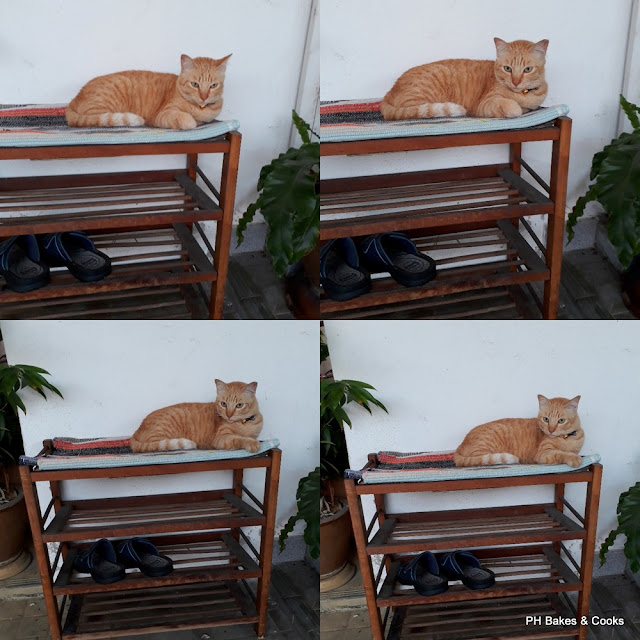 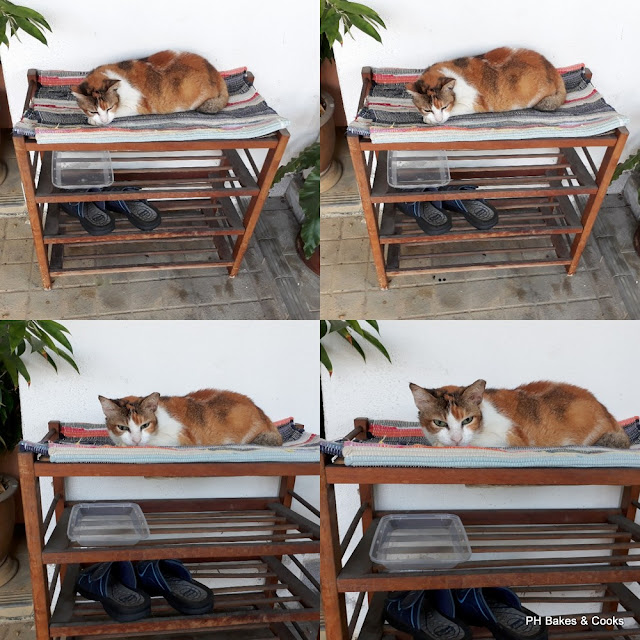 haiz.....
Girl has come to tolerate Belle and when her spot outside is taken, she just goes to a corner without a fuss. 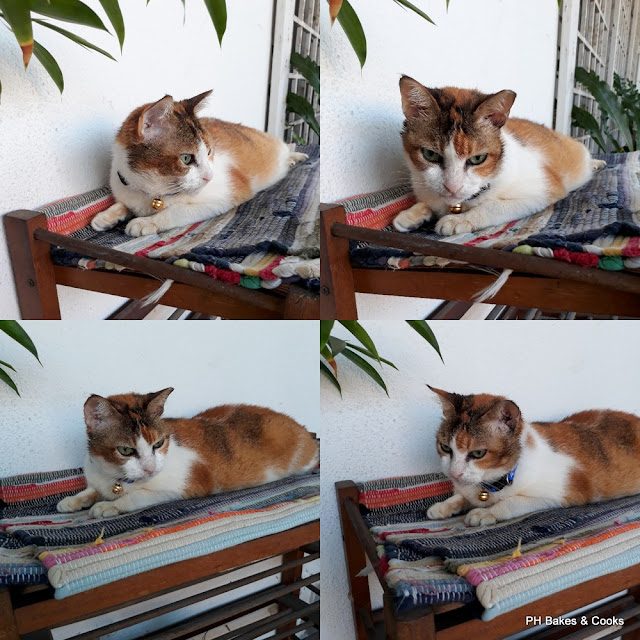 The current arrangement is working quite well and I shall keep it that way. Meanwhile, Belle seems to have recovered and I have to keep an eye on her to make sure that her infection does not recur. 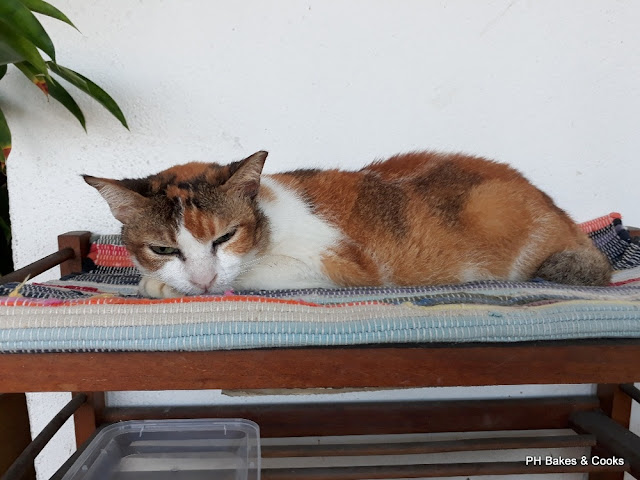 Email ThisBlogThis!Share to TwitterShare to FacebookShare to Pinterest
Labels: Cats