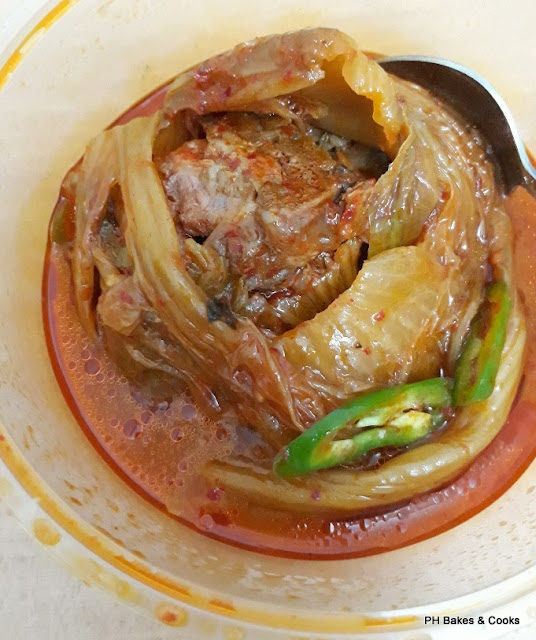 I am on the food delivery trail again because I got curious about Kitchen Goheung Solaris Mont Kiara (non-halal) after reading about it here.
I immediately wanted to try the pork bone stew, in particular the pork bone with kimchi stew. So the only avenue was via Grabfood.
My first order was their pork bone stew (which comes with rice and two banchan) and kimchi pancake. I did not take a photo of my meal because I was busy that day. I had to attend a webinar, so I was parked in front of my computer for half a day.
That meal impressed me. The pork bone stew was superbly scrumptious. I drank every drop. But I was not as impressed with the kimchi pancake simply because it was all soggy by the time it got to me. 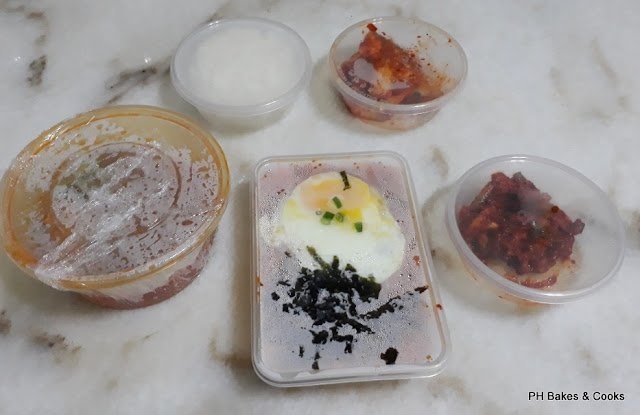 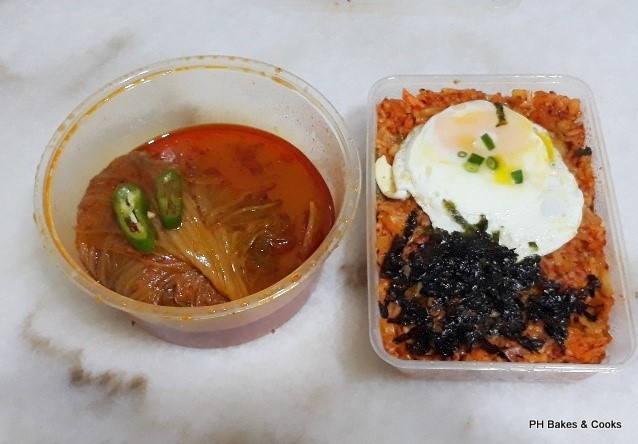 I was very curious about the stew, in particular if it would taste like the kimchi jigae that I cooked hee..hee.. 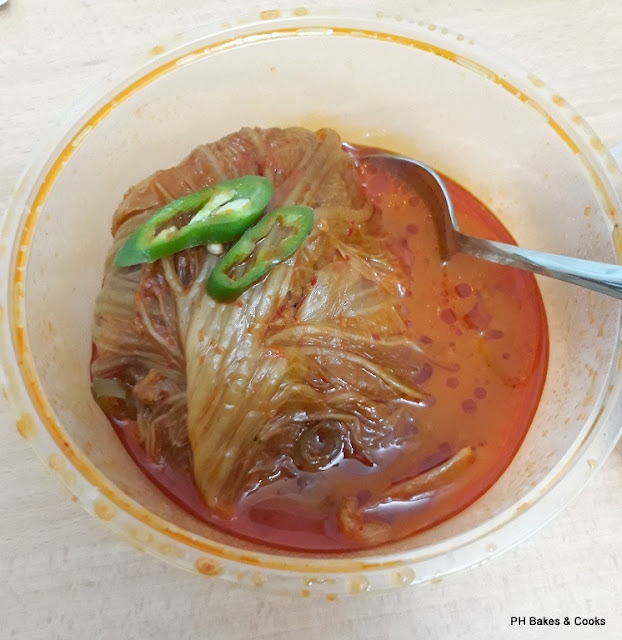 What I saw was a lump of vege. 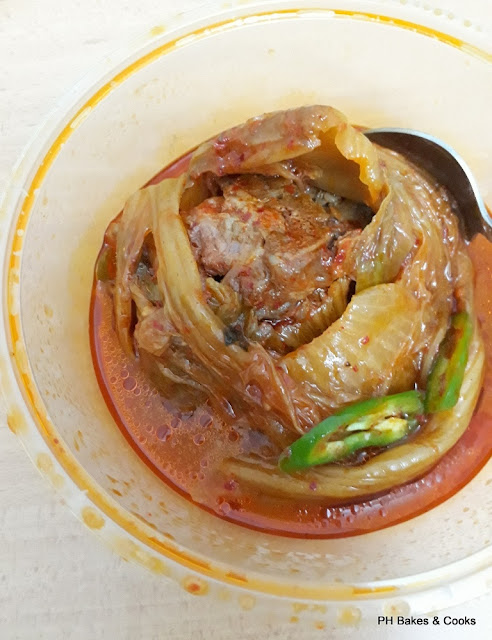 Ooohhhh..........the pork bone was wrapped in kimchi!  How unique. Upon tasting the stew, wah! so good!! Not only that, my kimchi jiage tastes like that too! 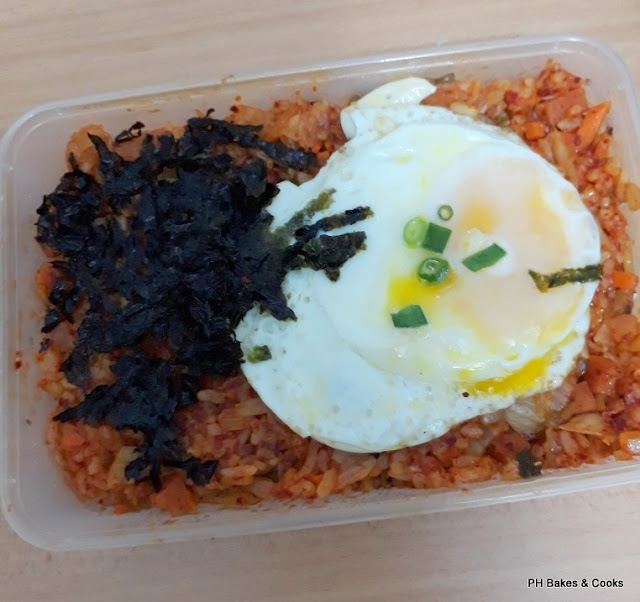 The kimchi spam fried rice was not bad but I felt that white rice is better to complement the kimchi stew. Savory and savory was too much on the tongue.
I kept the rice and two banchan that came with the pork bone stew for dinner. And guess what? I had a portion of my DIY kimchi stew (frozen) to go with that. 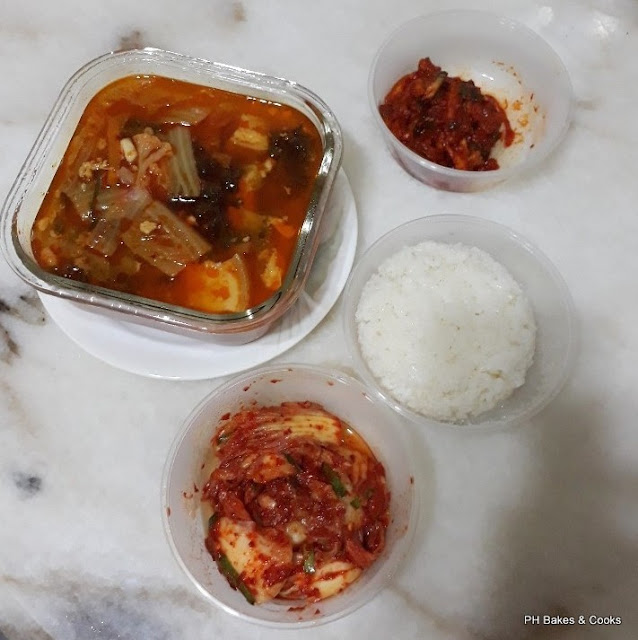 The default banchan is kimchi and I simply love their kimchi. Why? Because it is not a fully fermented kimchi and it tasted fresh, just like kimchi that has just been freshly made or been made only a few days ago. 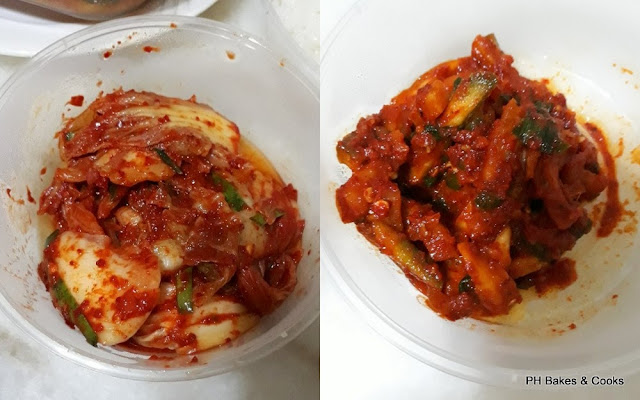 The other banchan was a mixture of carrots and cucumbers in a thick spicy paste. It was also delicious. 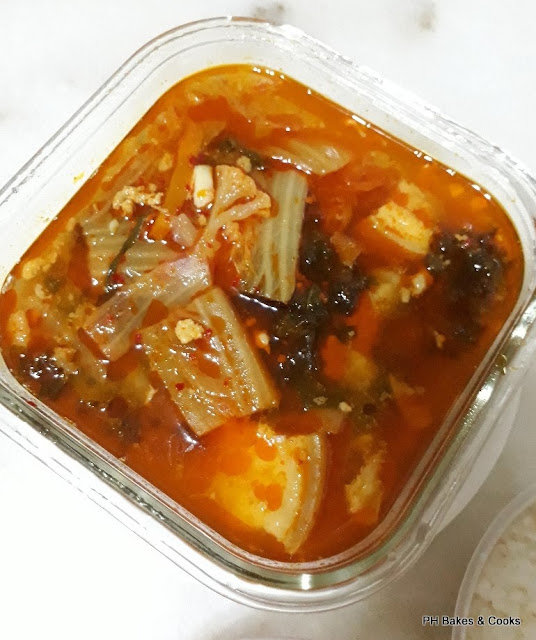 And madam's home cooked kimchi stew can now stand proudly among those cooked by the ajunmas heh..heh...
I know this is crazy but the next day I wanted some more pork bone stew (I promise I will cook my own soon!). This time I opted for the regular pork bone stew that I ordered the first time.
You see, with regular pork bone stew, you get two meaty pork bones. But the one with kimchi, you get only one. Both are the same price. So. 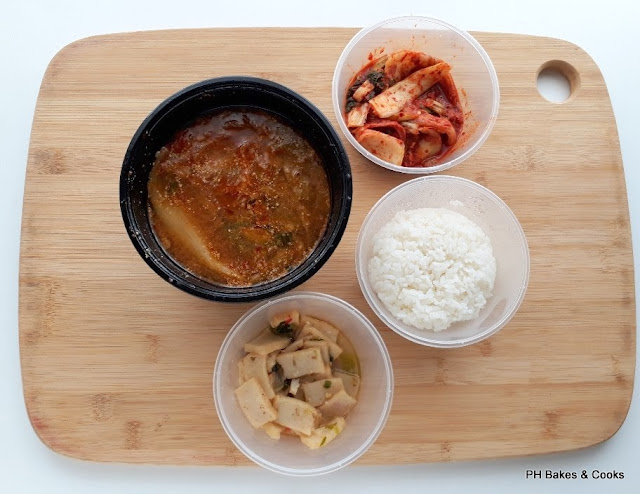 The banchan was kimchi and fish cake. 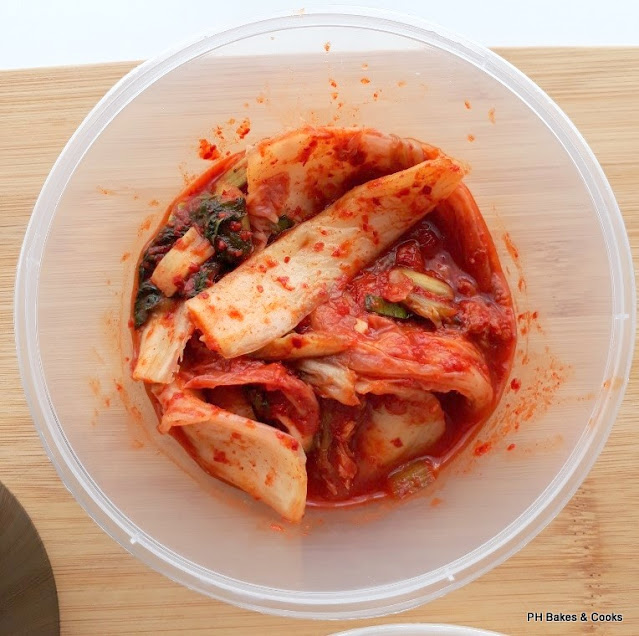 This time the kimchi was a little tangier but still very fresh tasting. I dislike kimchi that is overly sour and super pungent. 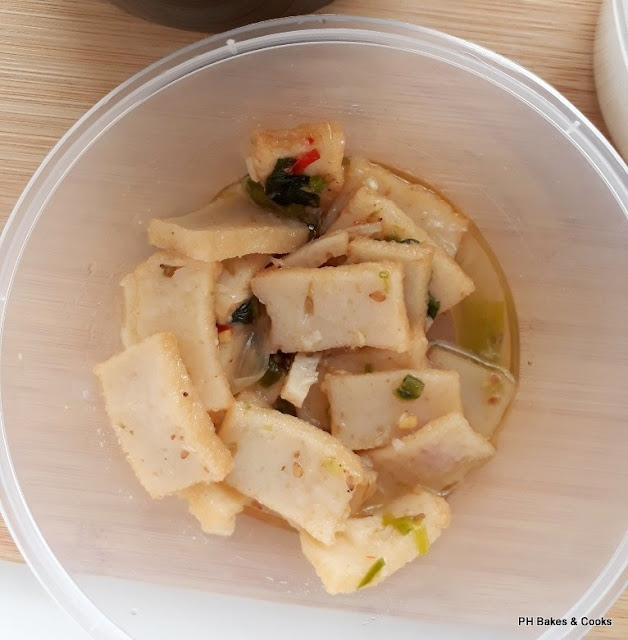 I was a little disappointed when I saw the fishcake banchan but I must say that it tasted so much better than it looks. I really liked it a lot. 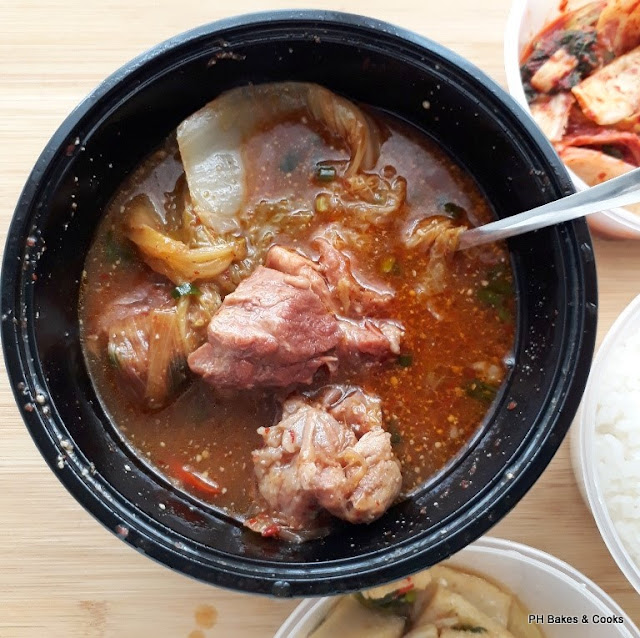 As for the pork bone stew, oohh..la...la... so, so darn good! Two meaty fall off the bone porky goodness. I am in love with this stew. 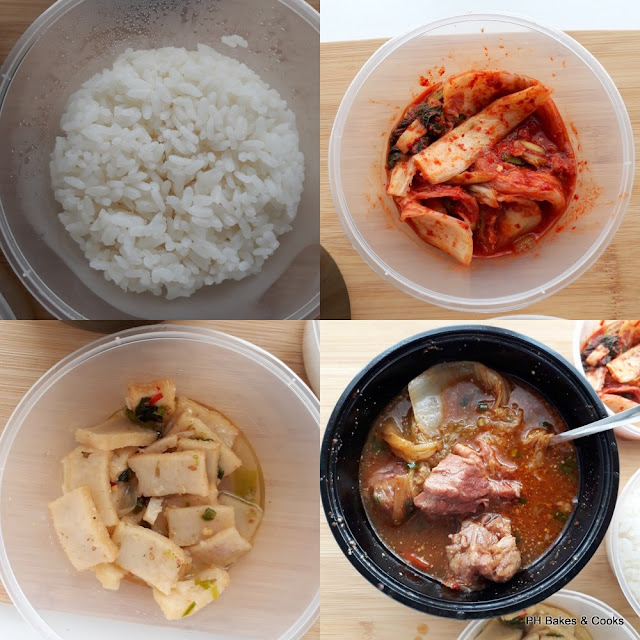 I also ordered something for dinner - the rice topped with stir fried pork. It was also very tasty, tasted just like this one, but with lots of crunchy vegetables. 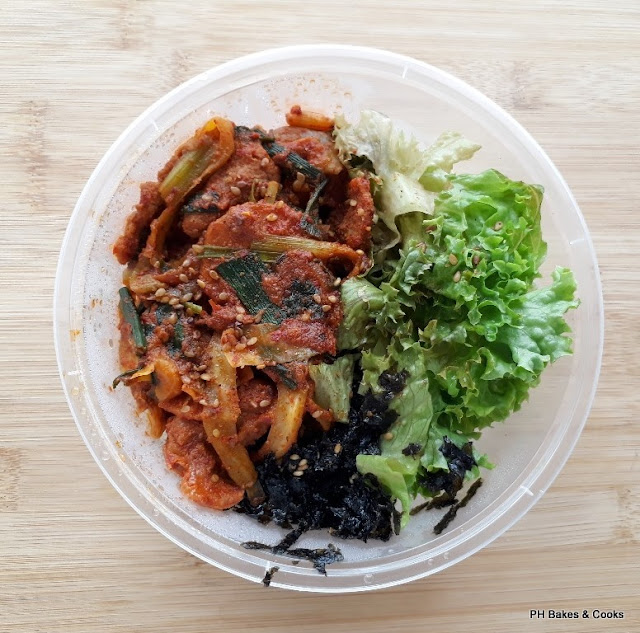 I took the liberty of adding my favorite addictive eggs. 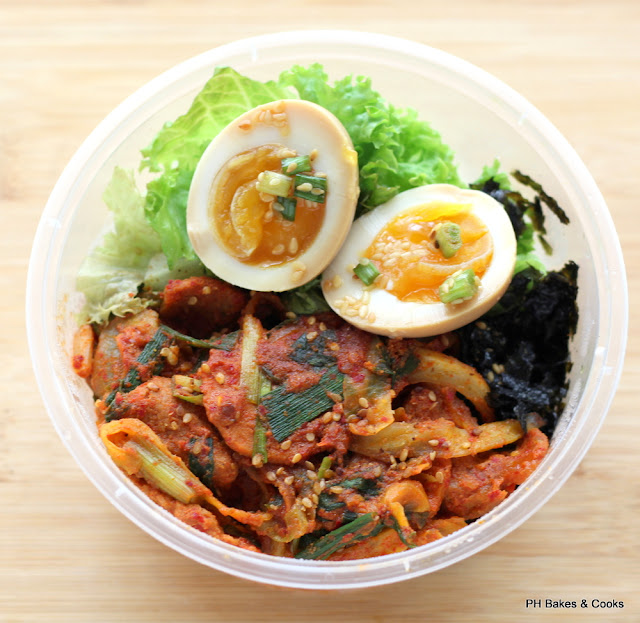 After the CMCO, I'd really like to make a trip down to Kitchen Goheung with my brother. I am sure he would appreciate a bubbling pot of pork bone stew to share with his sister. 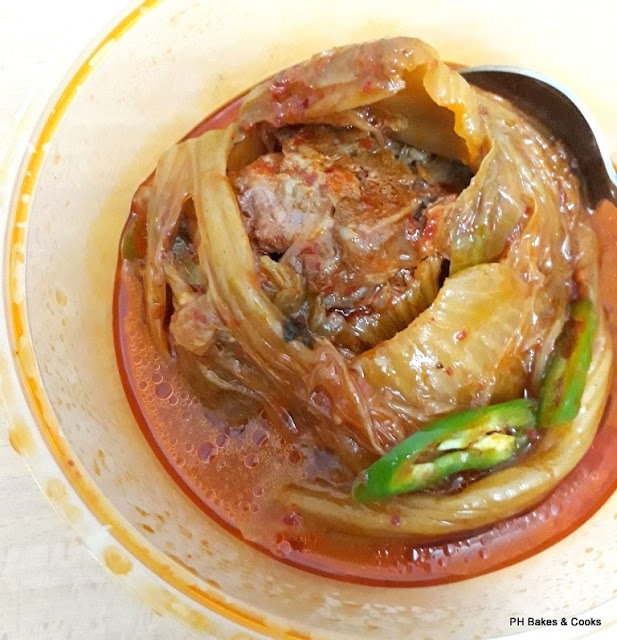