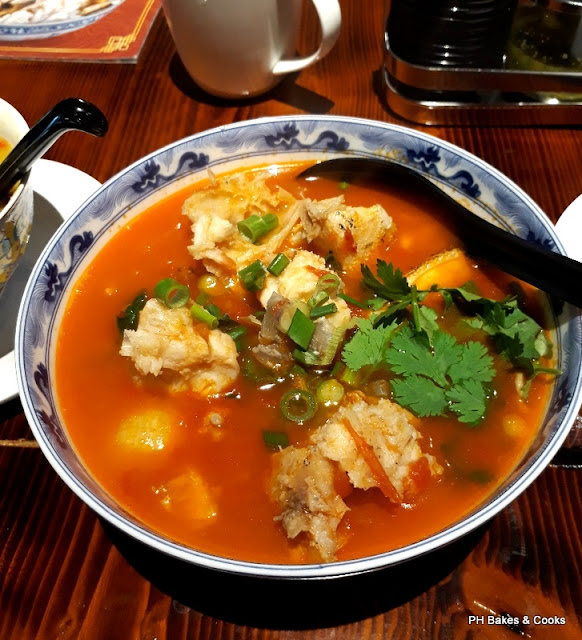 Just as restaurants come and go around Damansara Uptown, the same also applies to restaurants at The Starling mall. A few restaurants have called it a day namely Bonfire, Vine, Kory and a few others at the foodcourt. 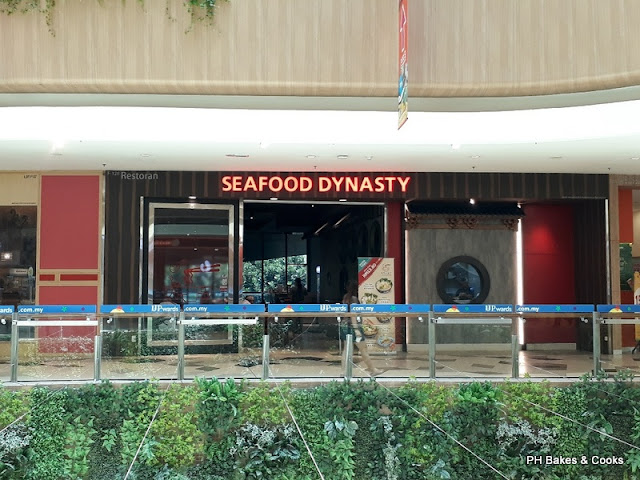 This new one, Seafood Dynasty has taken over the space vacated by Smart Kitchen. 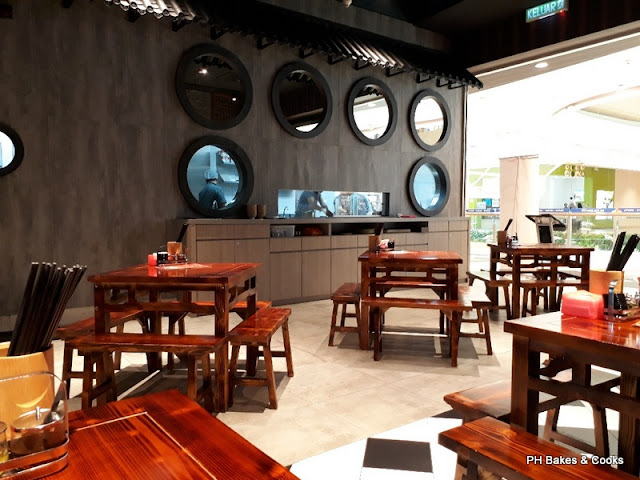 The decor is pretty much the same minus the gimmicky noodle cutting robot. I noticed that the tables and chairs have been changed.

I don't like the tables. You will notice the extra bar between the table legs gives you very little leg room. Stools would be more suitable (your legs won't need to go under the table) rather than those benches. 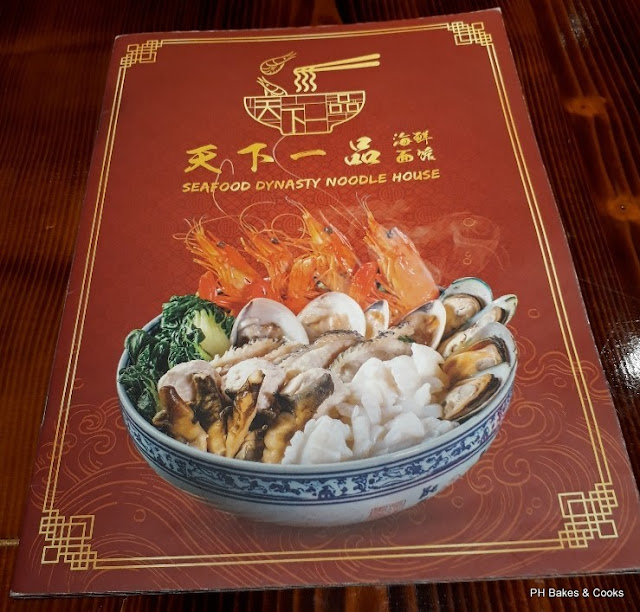 I am not really a fan of seafood but I like to expand my diet a little bit lah. Sometimes I will eat something besides chicken and beef. At least when the seafood enthusiasts talk about seafood noodles, I will have something to say hah...hah... 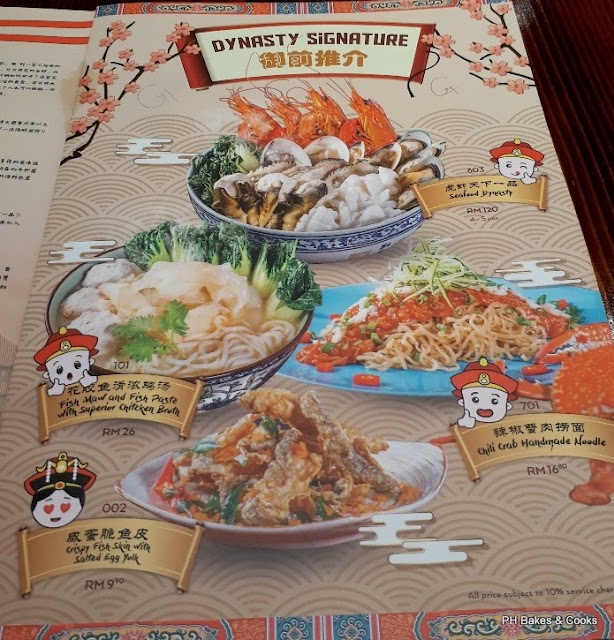 Seafood is always pricey and you will expect to fork out a little bit more when you dine at such places. 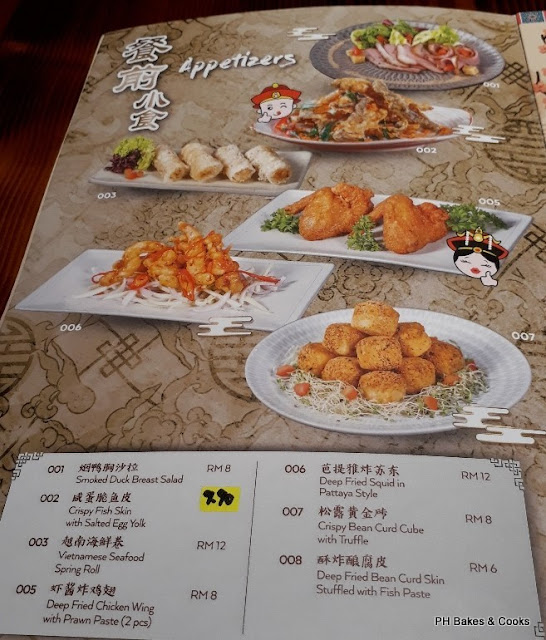 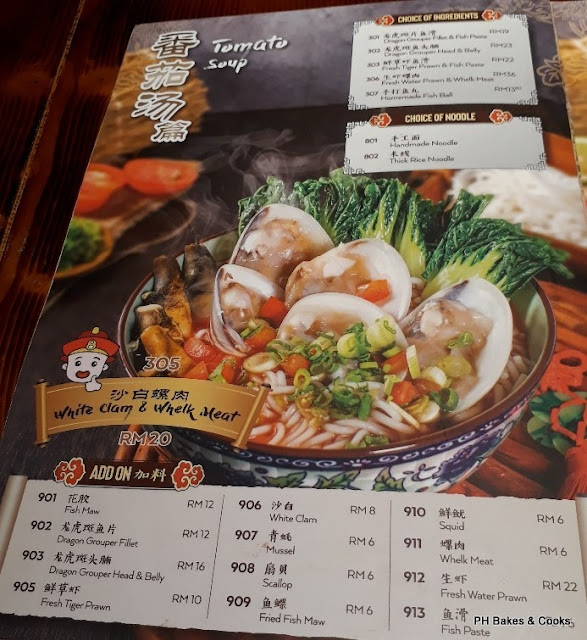 I settled for Tomato Soup (I have a thing for tomato based soups) and chose Dragon Grouper Head and Belly (RM23.00) with Handmade Noodles.

I also chose to add on Fish Maw. The server asked me what soup base I wanted - chicken or mushroom. I was a little confused. Did I not order tomato soup? 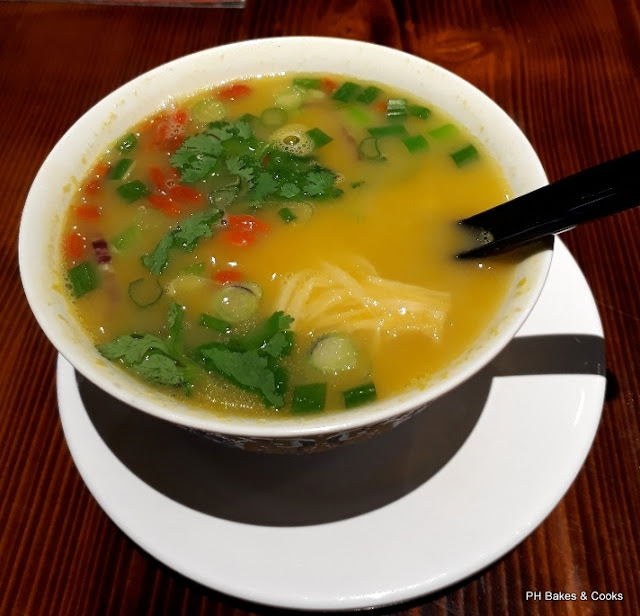 It was only after I was served that I realized the add-on is served separately with a soup base of either chicken or mushroom. I had chosen chicken and the server explained that the yellow color comes from pumpkin. 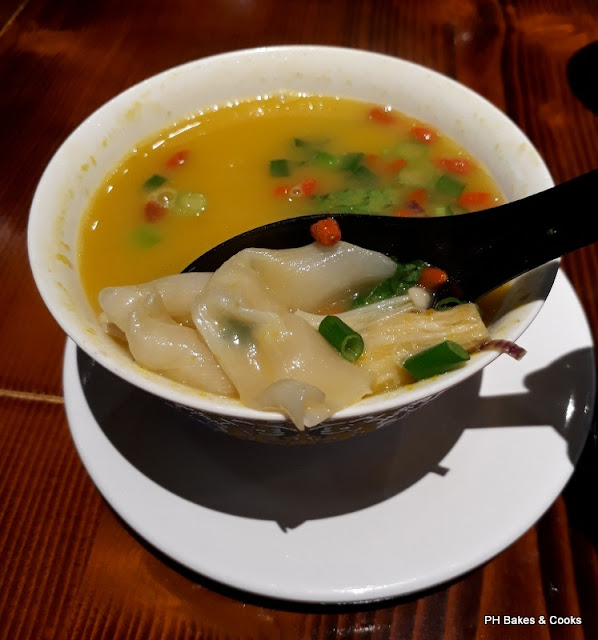 I liked this soup. There were two pieces of fish maw, enoki mushrooms and lots of goji berries. This came before my main bowl of noodles. 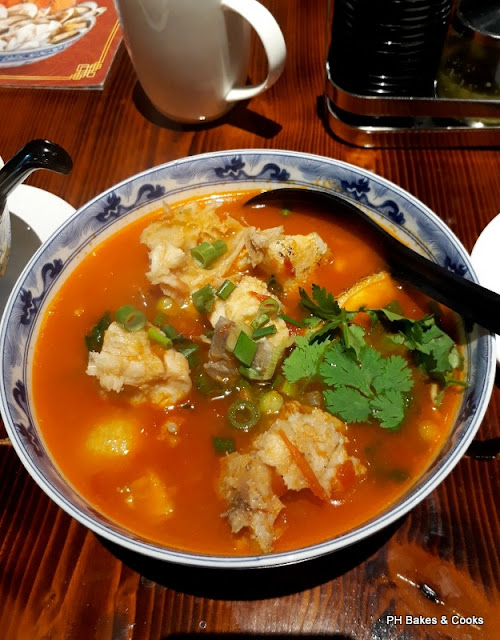 The tomato soup was a little spicy hot and tasted quite all right. I removed all the pieces of fish head to a saucer to make it easier to eat. It's not so convenient to tackle fish head when eating out hah..hah.. 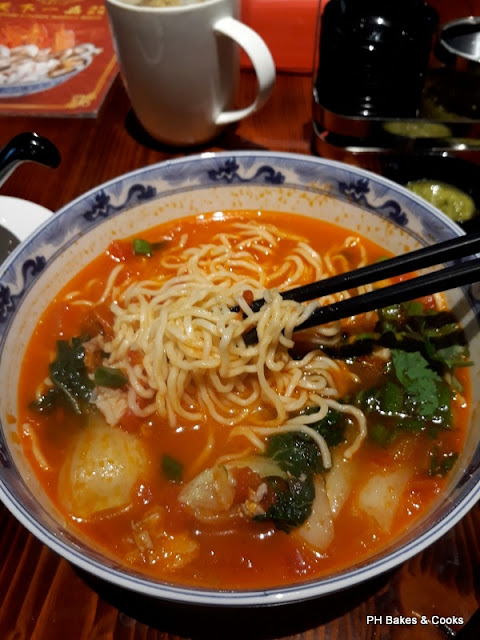 Upon digging into the soup I found only two fish slices. The rest were loads of noodles (which I couldn't finish) and some vegetable. 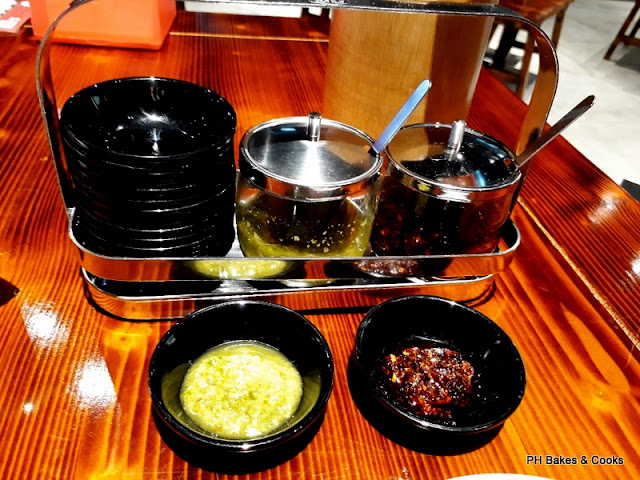 The condiments comprised of garlic/coriander dip (something like those served at Thai restaurants) and chili oil.

Quite honestly, I preferred the chicken soup base that came with the fish maw. There was not much meat to be had from the fish head. If you want fish head noodles with more meat and value for money, Mr Fish@The Starling is a better bet. 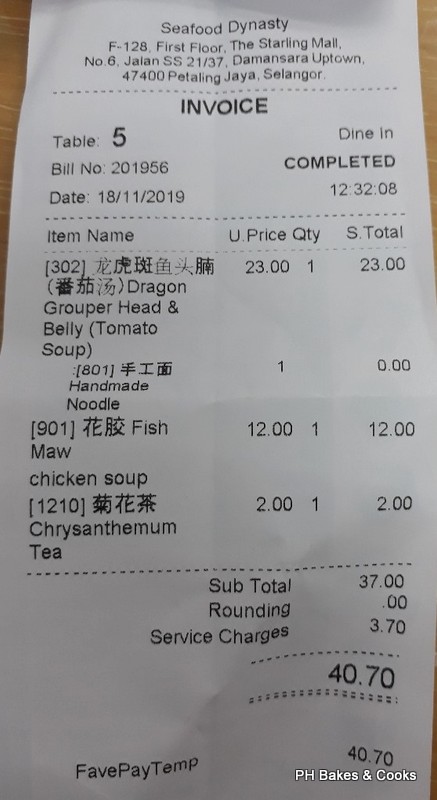 That was a rather pricey lunch. 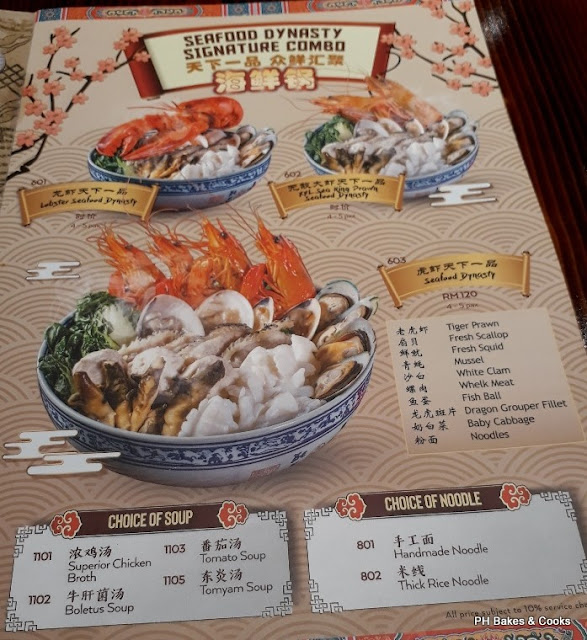 This is the rest of the menu. 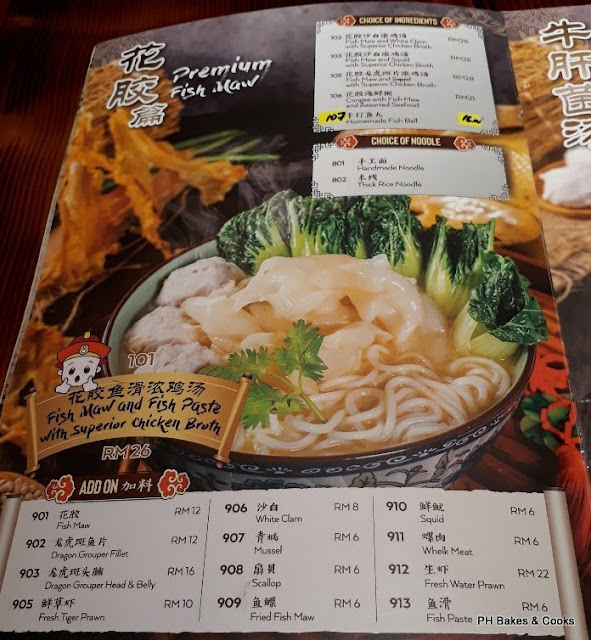 I might go for this one later on since I like fish maw and their superior chicken broth. 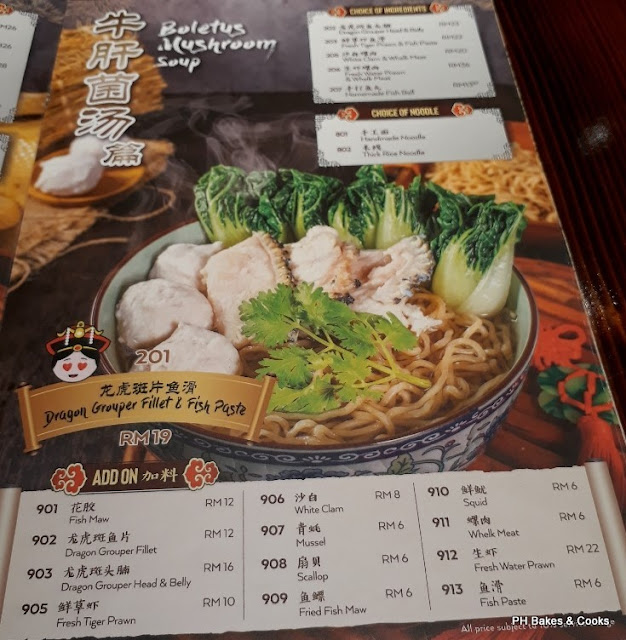 I wonder if Dragon Grouper is a thing or just a fancy name. 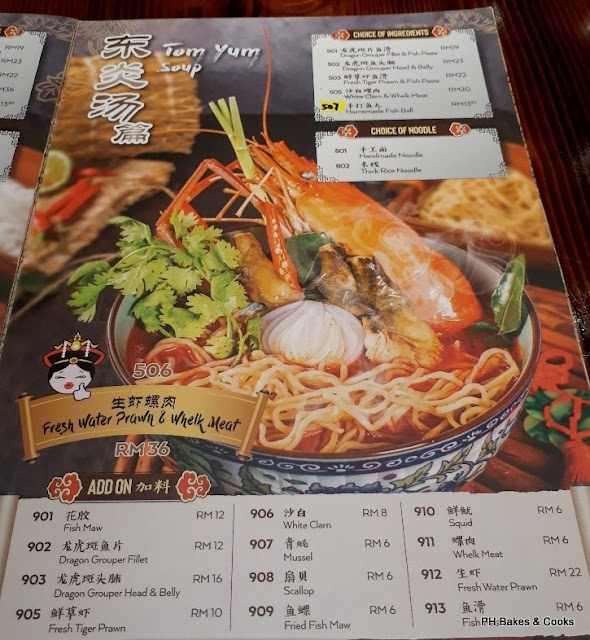 Maybe I will try their Tom Yum next. We'll see. 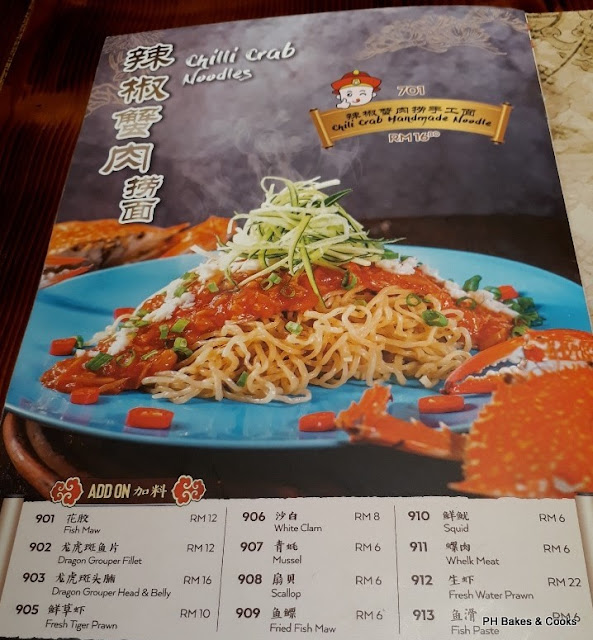 How much crab meat do you think you will get with this dish? 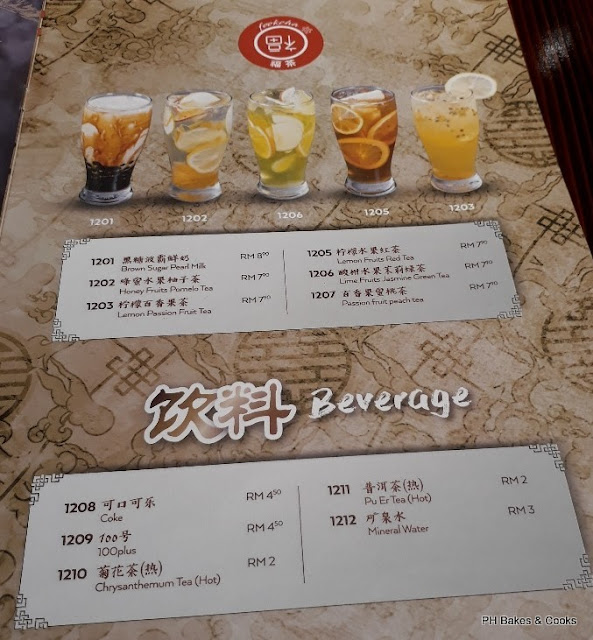 I wish Seafood Dynasty good luck and that seafood enthusiasts will come and try the food. 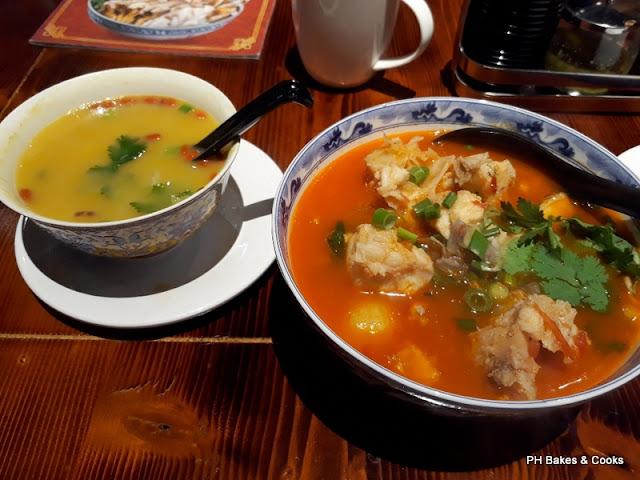