What's So Smart About This Kitchen? 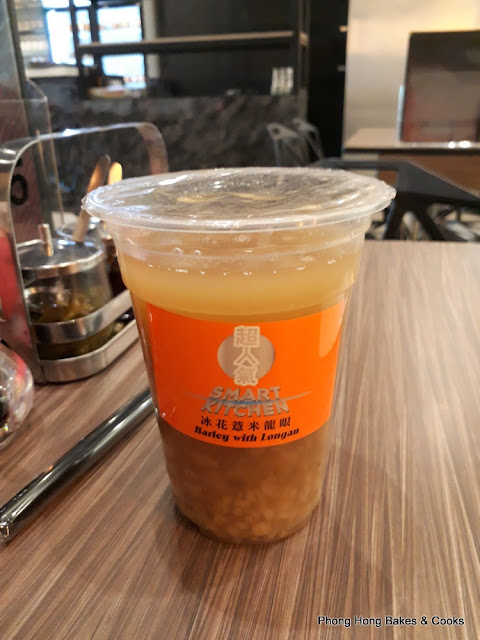 Update : Smart Kitchen has closed down.

A new restaurant opened recently at The Starling. It's called Smart Kitchen and as always, I will go kaypoh kaypoh to check the menu.


It's a restaurant serving Chinese food (non-halal) and I noted that the dishes are more of the Taiwanese sort of cooking. Not really my kind of thing but I am always game to try out new eateries.

And then I wondered why the restaurant is called Smart Kitchen. Apparently, they have what they call "Robot Smart Noodles". Robot?? 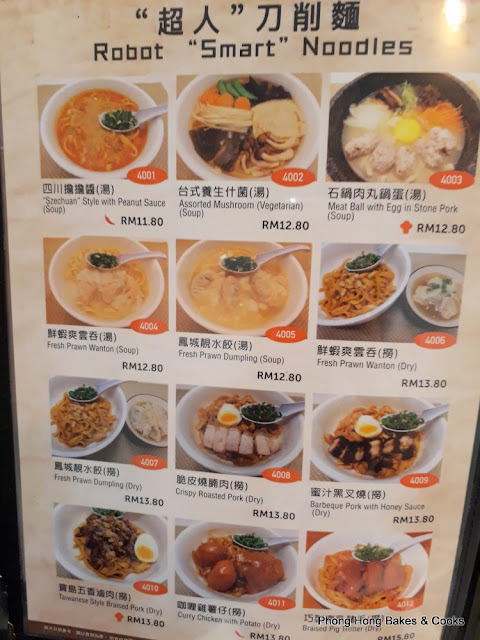 As I discovered later, it is rather gimmicky. The so called robot is basically a modified noodle cutting machine affixed to a mannequin. I managed to get a shot of the rather good looking robot. 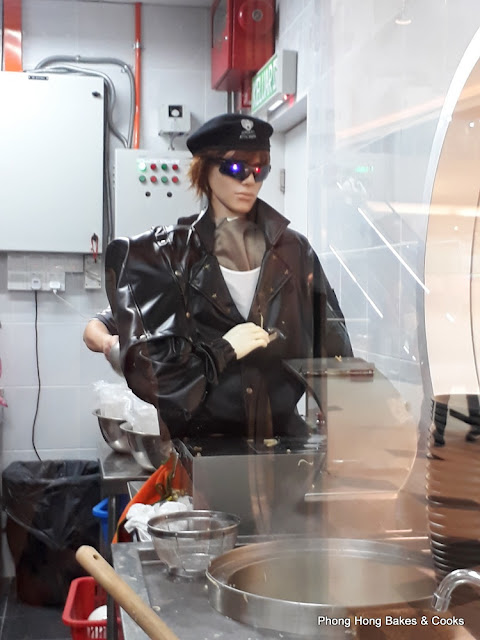 It was not in action at the time but I have seen the chef placing a board of dough on that slide thingy and the right arm of the robot moves up and down to slice the noodles which fall directly into the vat of boiling water. So it's not those sophisticated robotics that you may be expecting.

I visited one afternoon past lunch hour just to satisfy my curiosity. It took me sometime to make my selection as the menu was quite extensive. 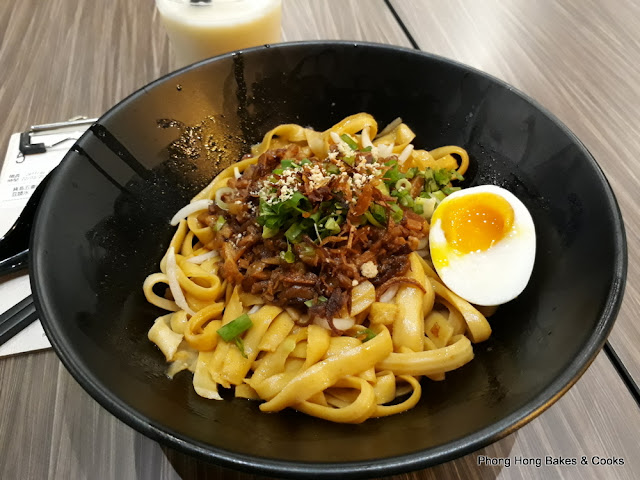 I decided upon the Taiwanese Style Braised Pork (Dry). For drinks, I had the Homemade Soya. 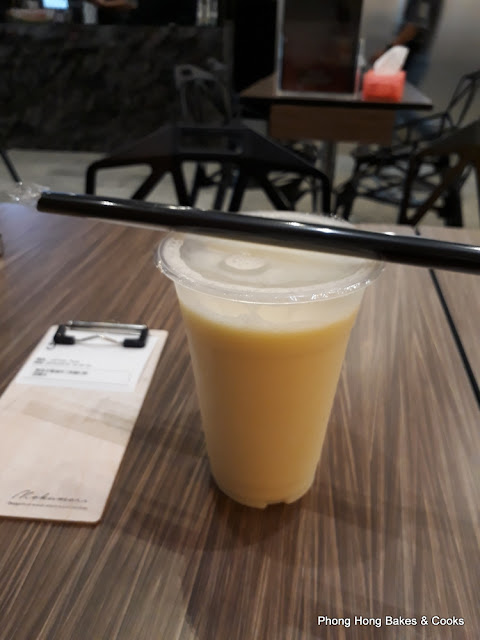 Now let's talk about the robot "smart" noodles. They were thick and a bit stiff though nicely cooked till tender but with a bite. 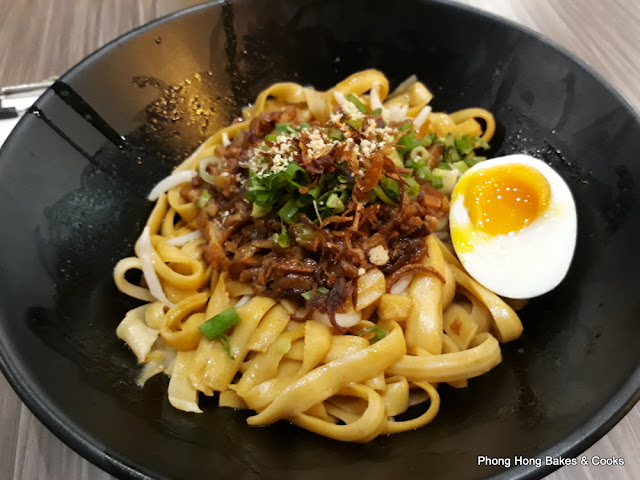 The meat was basically shredded braised pork which was tasty enough. I liked the soft centered egg though I do wish that restaurants would serve the whole egg instead of half.

I would rather serve my customer the whole egg rather than have the other half standing around waiting for the next order. But that's just my opinion.

The soya bean drink was nice, not too sweet. 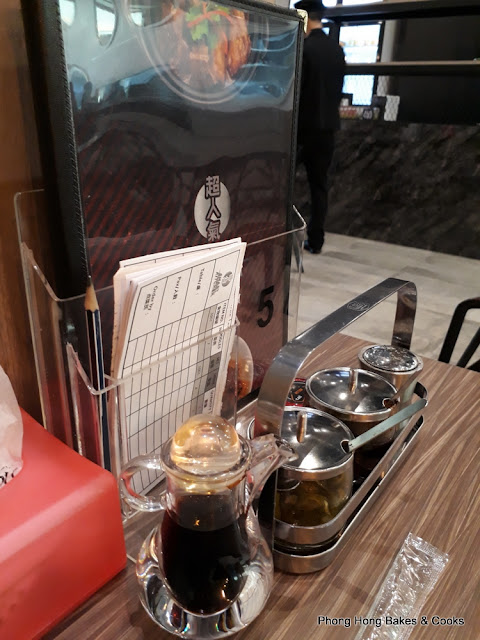 Ordering here is simple, you fill up the order chit and pass it to the wait staff. Condiments consist of light soya sauce, pickled green chilies, chili oil and pepper. I tried the chili oil on a second visit. No, not a fan of that so I stuck with the green chilies. 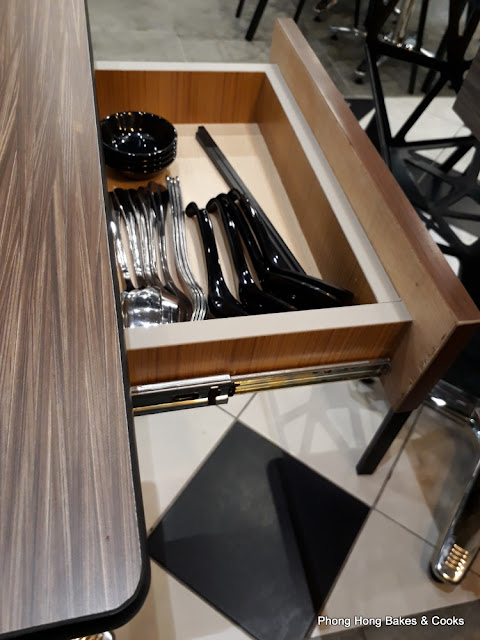 The cutlery is housed in a drawer attached to the end of the table. 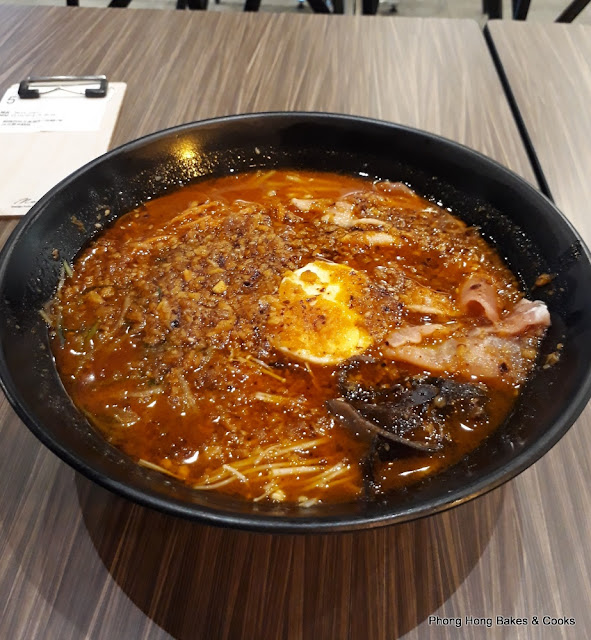 I went back again for the Hot and Spicy Soup with Iberico Pork. 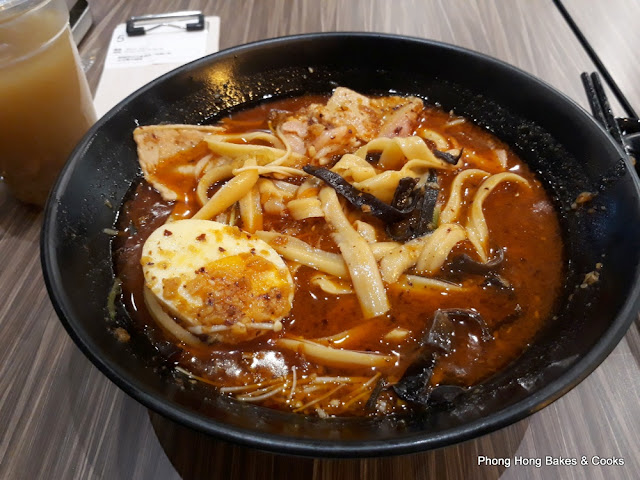 The soup was just as spicy as it looks but not overtly so. Not bad at all. As for the pork, I don't know if Iberico pork is suited for soups but it was nice enough. I counted 4 slices in my soup.

As for the noodles, yes, "smart" noodles again and this time I concluded that the noodles are too thick and stiff for my liking. But it is not going to prevent me from having more. 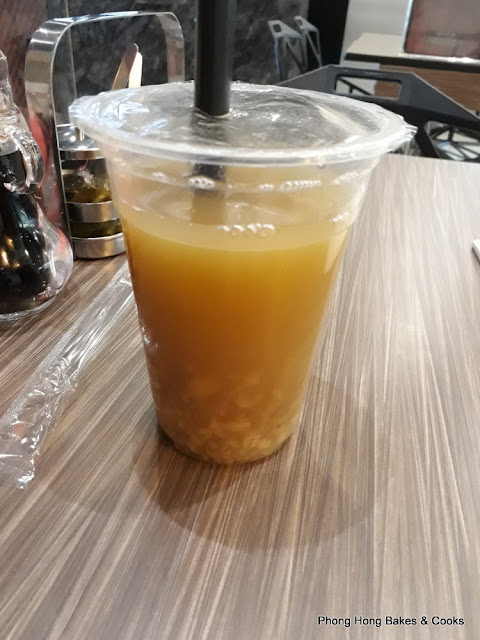 I liked the Barley Longan drink and I was happy that it was not too sweet.

I would say that the food is quite decent and I will be back every now and then for my noodle fix. Besides noodles, this restaurant also serves rice and porridge. And if you are not a fan of the robot noodles, you can choose from the egg noodles menu. 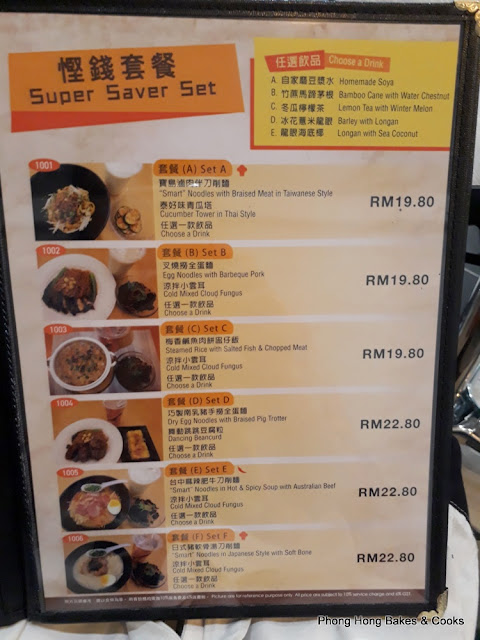 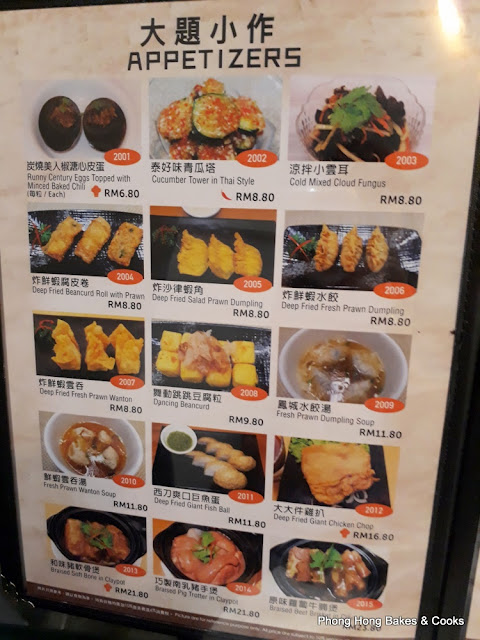 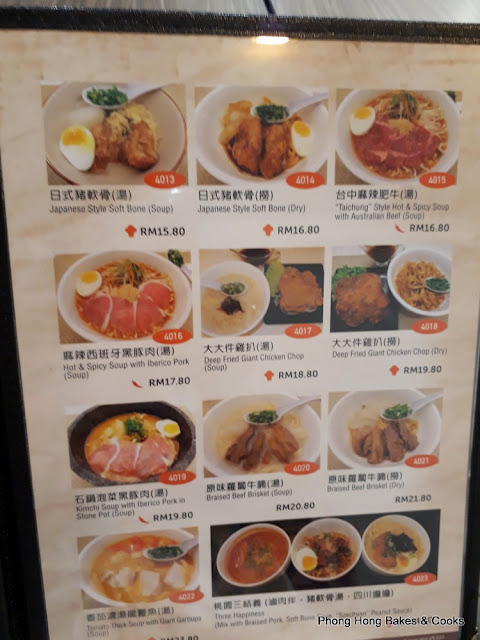 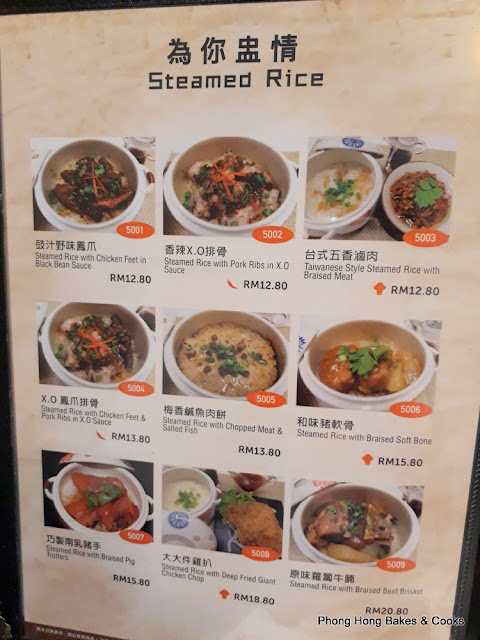 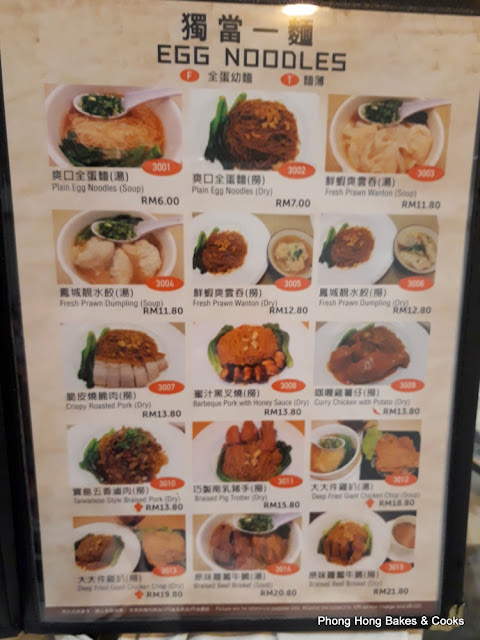 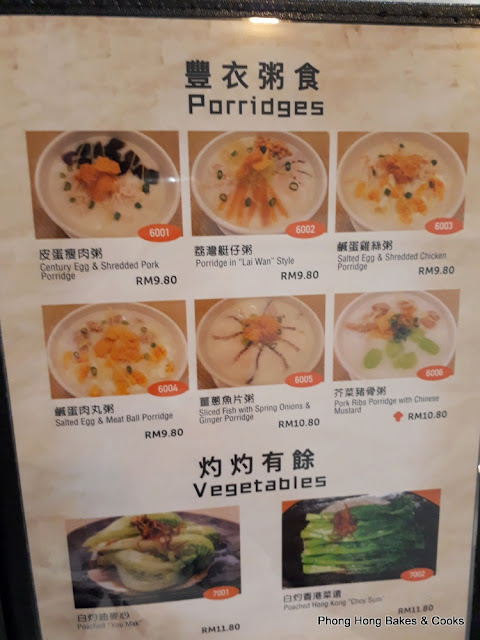 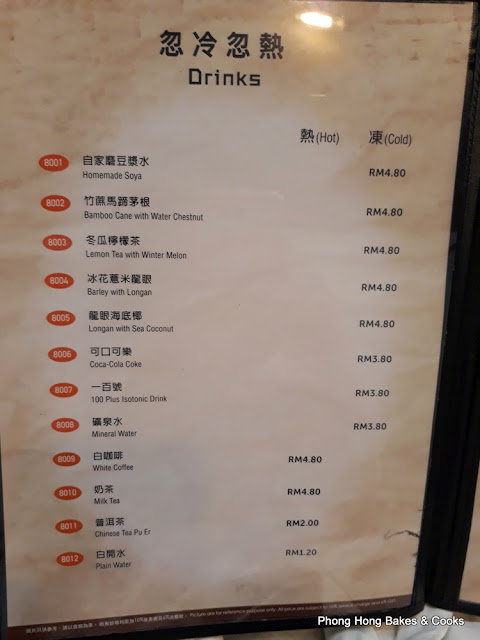