Lockdown Day # 12 : I Was Once A Sweet Young Thing

Well, aren't we all? Aren't we all, eh?? In this post which is nostalgic to me, what I can say is that I am glad my school days are over. Do you miss your school days? I'll be very honest and I will tell you that no, I do not miss my school days. In fact I hated school.
From kindergarten and primary right through secondary education, I did not enjoy school. I mean, OK, I might have enjoyed some of it, like my days at Sekolah Menengah Sultan Sulaiman, Kuala Terengganu from Forms 1 to 3. Other than that, blah! I wish I didn't have to go to school.
My earliest recollection of school was my early education at St Theresa Kindergarten. I was clueless as to why I was there. Blur sotong.
What I remember were these - I was terrified of one particular nun (she was big sized and scary), there was a boy who was constantly trying to hug and kiss me (Wai Ko, you hamsap fella, where are you now?), I became a bully (Wee Eng Ai, I am so sorry) and I played truant with two other girls. Somehow I graduated kindergarten unscathed.
I don't remember much of standard 1 or 2. What I do remember was sitting for a special exam where I skipped one year to standard 3 which meant that I saved one year of primary school. Yup, I was in the express class and no, I did not think that I was very clever. I was still blur sotong.
I am publishing my old photos and in some of the later ones, you will know which is me. I know some bloggers are not shy to show their faces (especially those leng luis and leng chais) but me, I cannot. Not my current face anyway.
But old photos, I can show lah. They are from more than 30 years ago and I don't look like that anymore. Besides these days what with masks and face shields, I doubt if anyone can recognize me.
So.
Then after Standard 6 it was off to secondary school, a slightly scary prospect as I did not know what to expect. I had to choose between Perdagangan (Commerce) and Sains Rumahtangga (Domestic Science). Boys had to choose between Commerce and Industrial Arts.
I thought it would be cool to make rojak in school (I saw it in the domestic science textbook) but no, my mother decided for me. No rojak. You go Perdagangan (but ma... I like cooking.....).
It was all right, that's when I got to learn and enjoy bookeeping and decided I wanted to become an accountant. Of course I realized with benefit of hindsight that bookeeping is the accounts clerk's job while an accountant has a much bigger scope of work.
Alas, after Form 3 my father was transferred to Kuala Lumpur and our family had to relocate. I was really sad to leave my friends behind.
That's when I started life at Assunta Secondary School, Petaling Jaya. I am very sorry, Sister Enda Ryan. You are a wonderful lady but I did not like Assunta.
See. I even wrote this at the back of the photo. 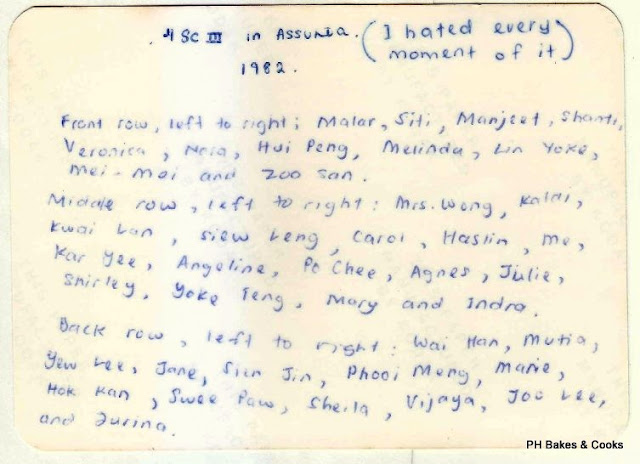 I felt very weird at Assunta because I was surrounded by aliens. From planet Kuala Terengganu to planet Petaling Jaya I had a lot to adjust to.
I was suddenly surrounded by so many non-Malays. The Chinese there spoke mostly Cantonese/Mandarin (which until today I can't speak). Even the Malays were so...different. The Indians, eh, I loved the Indians. I hung out mostly with my Indian friends.
After Form 5 I had a short stint (about a month) at La Salle, the brother school of Assunta. Then it was off to matriculation. Thank God because I hated Form 6. 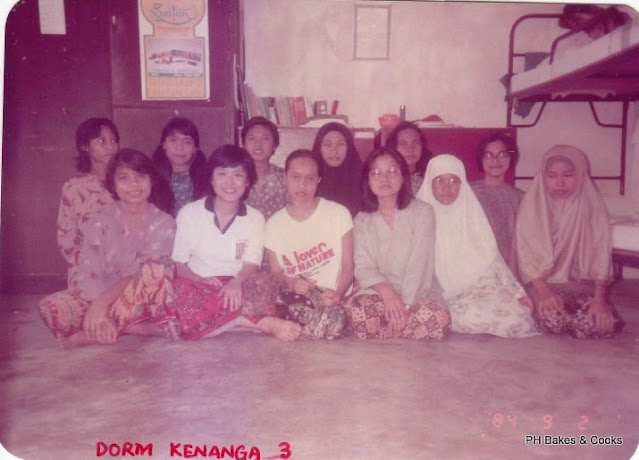 I did my Universiti Kebangsaan Malaysia (UKM) matriculation at Sekolah Sultan Mahmud, Kuala Terengganu. I was back to my own planet surrounded by Malay friends with whom I was very comfortable with. 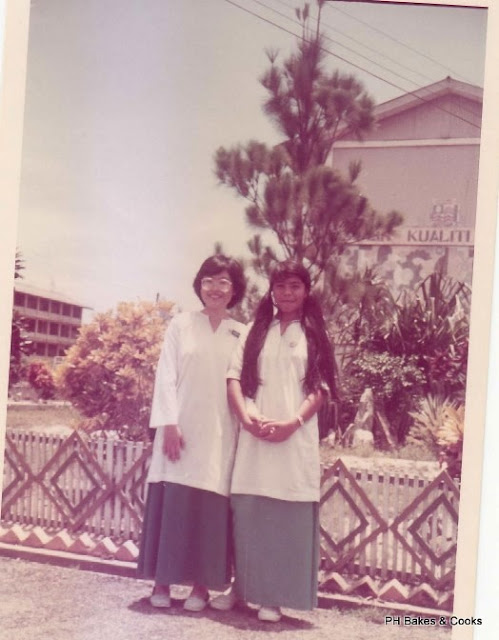 The first person I made friends with when I enrolled was Lid (Noorlida), a girl with big eyes from Felda Trolak. I was very scared and homesick because this was my first time away from home. I went through a very deep depression (my first major one) while at this school but no one ever knew about it. 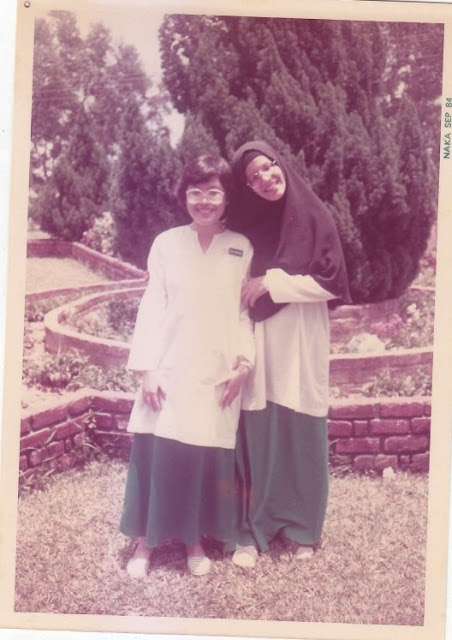 This is where I met the late Kak Mar (Maryam Abdullah), a French girl. Kak Mar (may she rest in peace) came to Pulau Duyong, Terengganu at the age of 9 with her mother, a lecturer at the University of Sorbonne, France. Her mum fell in love with a local man, married and settled down in Pulau Duyong. If you spoke to Kak Mar, you couldn't tell that she was French. She was 100% Terengganu. 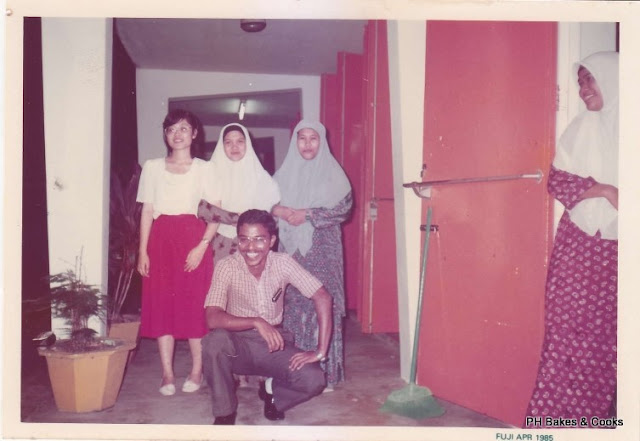 This is a photo taken at our matriculation farewell dinner and that chap you see is Samy from Klang. Samy was like some sort of a celebrity and he was very popular among the girls. Every time they caught glimpse of him, it was like Samy! Samy! heh..heh.. That's what it was like being the only Indian student at the school. 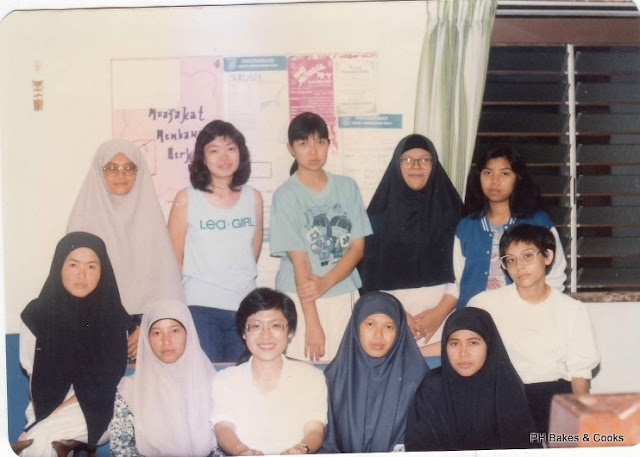 After a year of matriculation, it was time to go to the university. I did not have the privilege of studying overseas like my two brothers. But it's OK. God meant for it to be that way because had I gone overseas, I would not have come back. Serious. 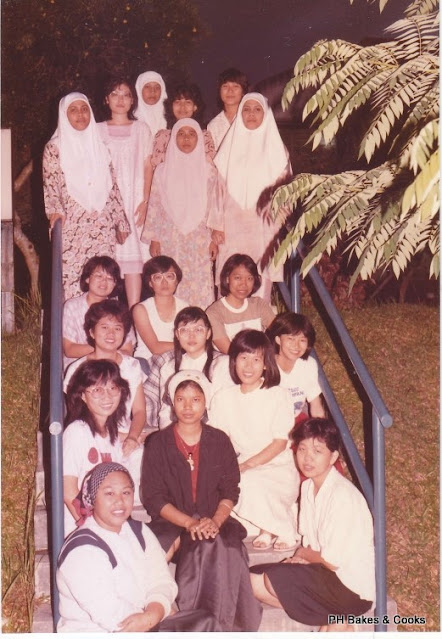 I must say that I enjoyed my days at UKM the most. I was so happy that I didn't want to come home. In my final year, I registered for the Masters program but sadly, I did not get to pursue that next level of education due to family circumstances. Or else I could have earned my PhD and delved into the world of recombinant DNA and such.
But then again, I would be very busy during this pandemic, finding ways to zap the virus. At least as an accountant (where the government thinks that my services are non-essential) I can stay at home and write all these grandma stories to entertain you. 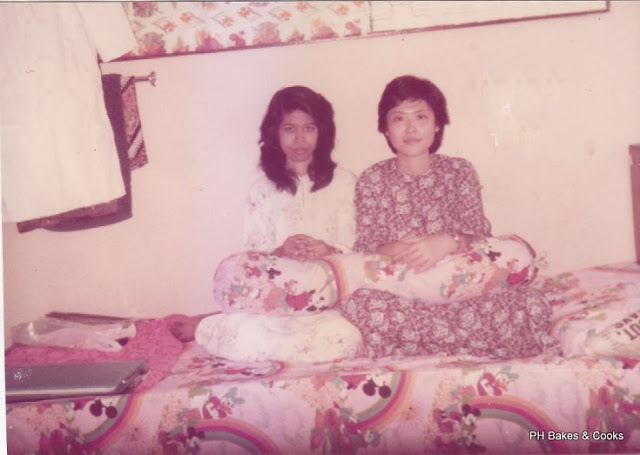 When I was at matriculation, I met a wonderful friend, Tim (Siti Fatimah). I loved her to bits but we lost touch after she made it to medical school. I failed to enter medical school not because I did not have the brains for it. It is because of something else which I cannot mention. But it's all right. Again. Pandemic. Doctor. No grandmother stories. (In other words, sour grapes) 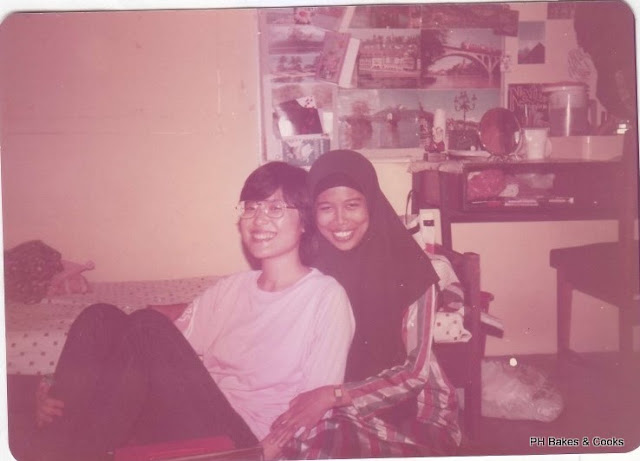 This photo brought tears to my eyes. We were so young and so happy. Tim, wherever you are, I hope that you are well and happy. I miss you. 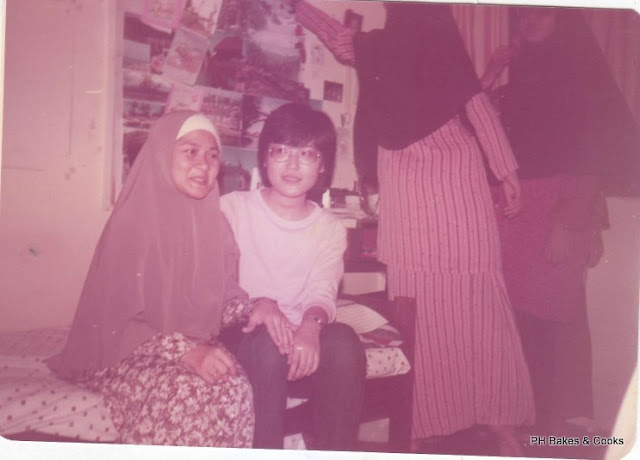 Ah, this is me and Rubi (Rubaidah). Rubi is a clown and she is quite a riot. I remember her as being hilarious and she never failed to make me laugh. 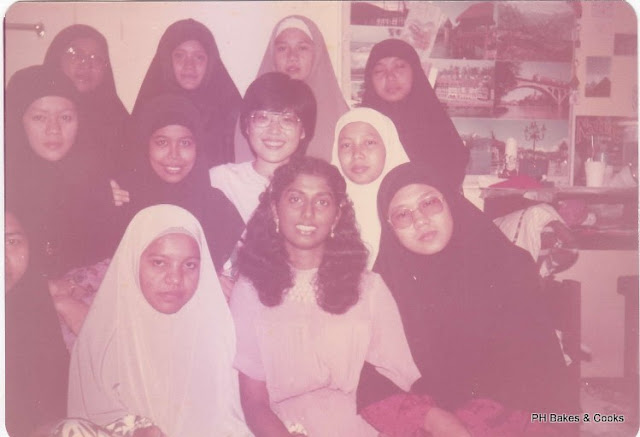 This photo was taken during Siraj's birthday (You can tell which one is me hah..hah...). It was fun. 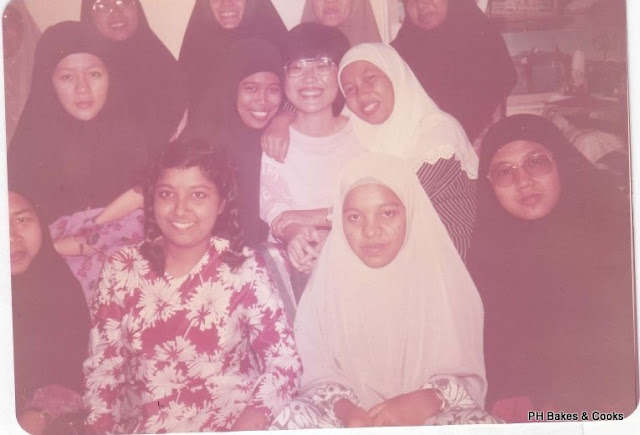 As you can see from these photos, I hung out mostly with my Malay friends and we get along real fine. In fact, I speak Malay like a Malay, close your eyes and you will think that I am your regular makcik. 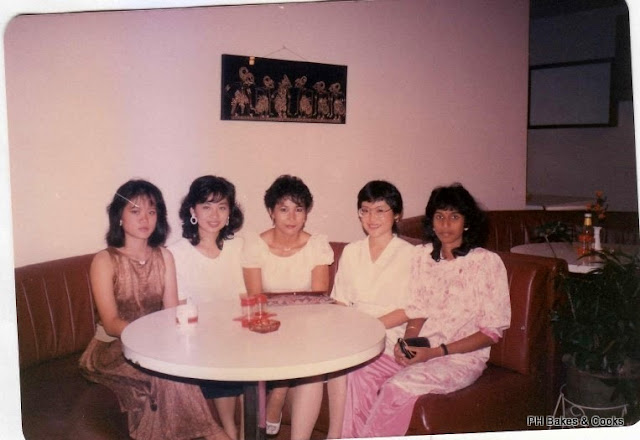 I am not the sociable type but here I am in more glamorous settings. It was a department dinner or something like that. Not my usual crowd but you know lah, sometimes we are obligated to attend certain functions.
Becky who is seated to my left once gave me food that her mother cooked for her. It was during semester break (we all stayed back to complete our thesis) and her mother sent food to her everyday. But our friend was too busy going dating and needed someone to eat the food. So I had about almost 2 weeks worth of home cooked Indian food for dinner. Thank you, Becky's mother!
Ah! Those were the days when I was a sweet young thing!
Posted by PH at 15:56

Email ThisBlogThis!Share to TwitterShare to FacebookShare to Pinterest
Labels: Lockdown