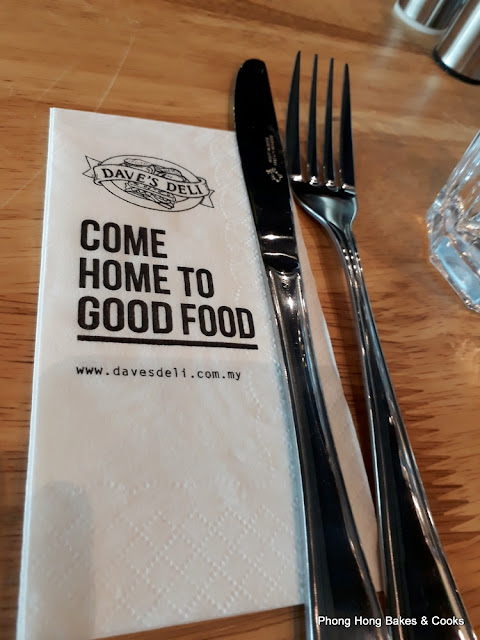 My brother and I had dropped my parents off at his house after dad had an unscheduled hospital visit due to some post-surgery issues.


We were hungry and since Dave's Deli had just opened a couple of days ago and were offering a 15% opening discount, I suggested that we visit. 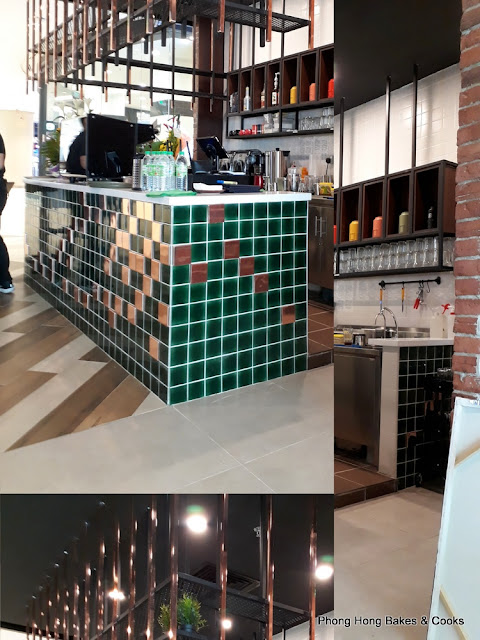 This restaurant is situated just next to Daiso on the first floor. Dave's Deli has been around for a long time and my first ever visit was more than 10 years ago when they had an outlet at the old Atria, Damansara Jaya. I remember liking their beef lasagna. 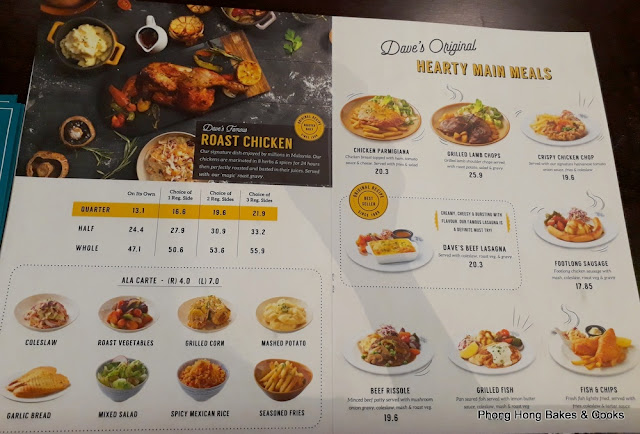 When I got wind that this outlet at The Starling opened (via leaflets distributed by their staff), I went to check the menu. One of their servers approached me and gave me a run down of their menu which he said is different from before.

He highlighted to me that now when you order their roast chicken, you can decide how many sides you want. I thought the items on the menu appeared all right, not exactly exciting but all right. So I made a note to visit at the next opportunity, hence lunch with my brother here. 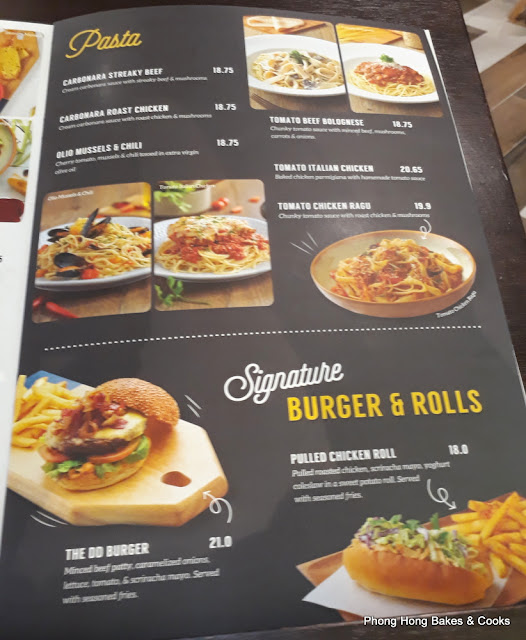 We arrived before 12:00pm and yet a few tables were already taken. I guess people are eager when a new eatery opens (especially a well established outlet like Dave's Deli) and they wanted to take advantage of the promotional discount. 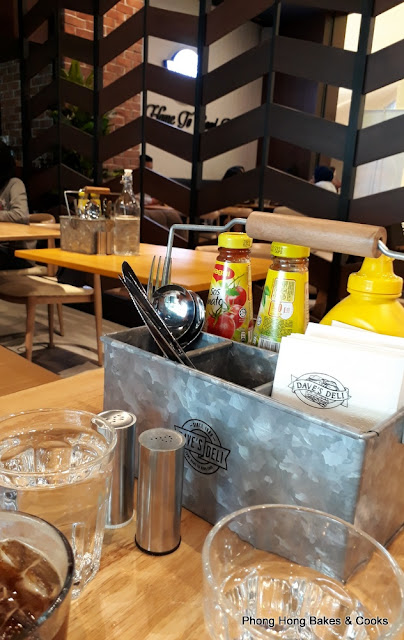 The seating here is quite cramped due to the small space. There is an outdoor seating which might be more comfortable as there is a bit more space outside, though not much more. 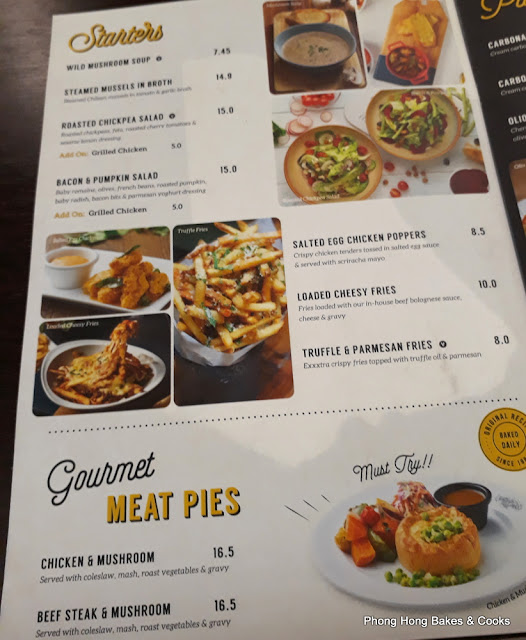 I saw three aunties near our table having the roasted chicken and what they had looked pretty decent. But I have not had too many good experience with roasted chicken at restaurants so that would not be my choice. 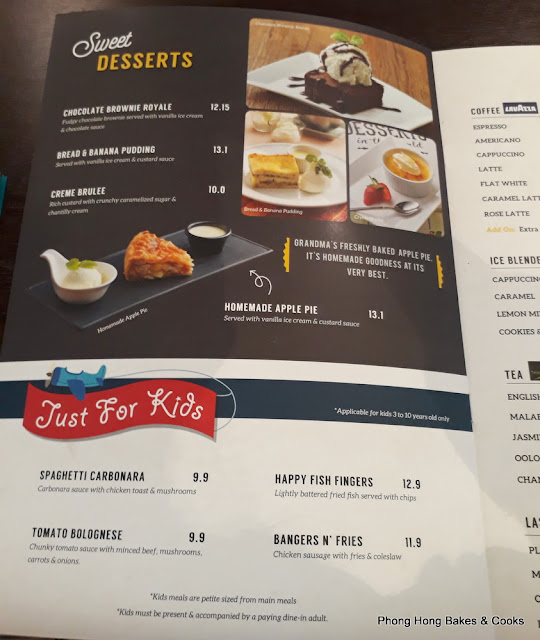 After checking out the rather compact menu, we decided on Salted Egg Chicken Poppers for sharing, Tomato Beef Bolognese for my brother and Grilled Lamb Chops for me. For drinks, we had our usual, a Latte for him and an iced Americano for me. Oh, you are served water on the house here, which is nice. 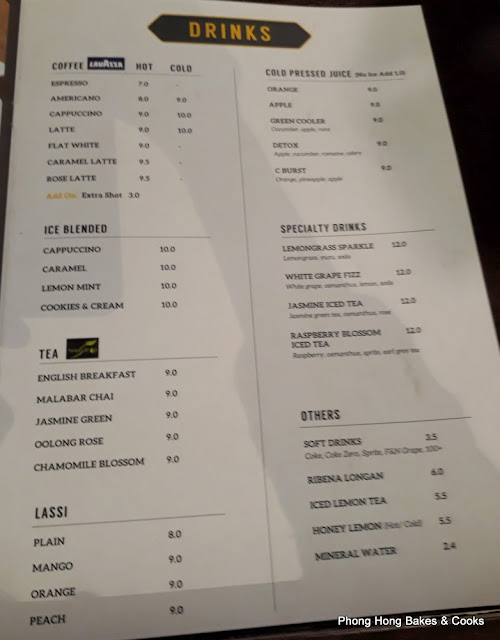 By then, more people were coming in, some in groups. I could see the servers getting quite flustered. At the same time, some contractors were seen plastering the Dave's Deli sign on the windows, an indication that this place is still so new. 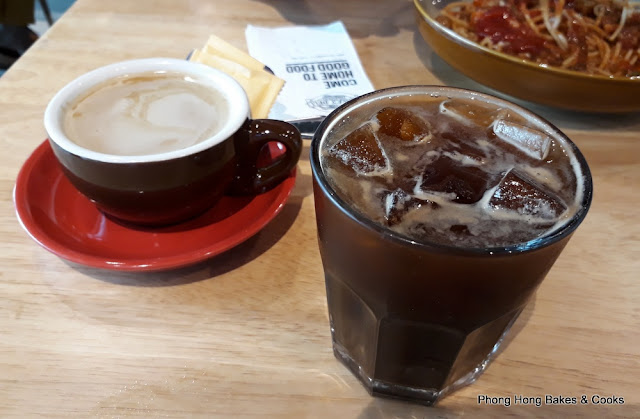 Our drinks. No coffee art on my brother's Latte, not that it mattered. Then both of us were hit by a sudden compulsion. 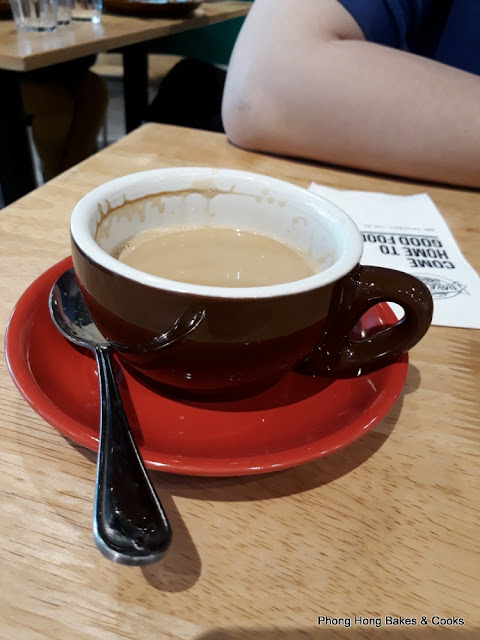 This coffee cup looked familiar and we had to try the handle for size. Confirmed. Our fingers could not fit wahahaha..... 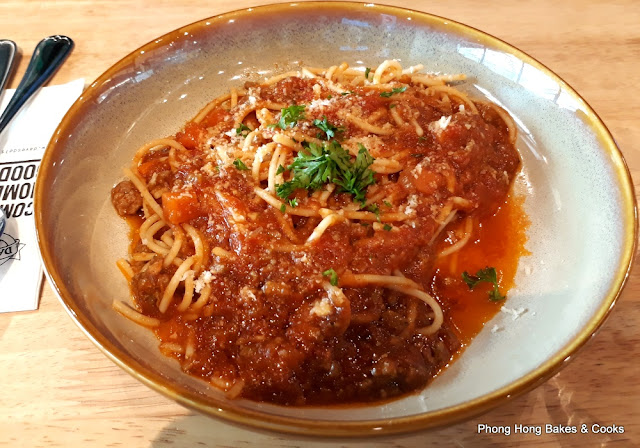 My brother's Tomato Beef Bolognese was the first to be served. After his first taste, my brother remarked that the pasta was nice. 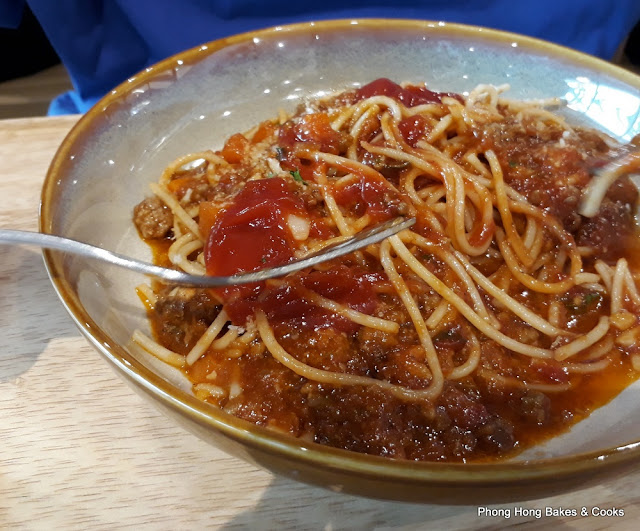 But still, he helped himself to the tomato ketchup. It's just a habit of ours since young. As my brother was enjoying his pasta, I was still waiting for my lamb chops and the starter.

The server came by to check if our order was complete and of course he noted that two items were still outstanding. And I waited. I had to remind him and he assured me that my food was coming. By then, my brother had finished his food.

As I waited some more, I noted that a guest who was seated way before us was just served her order of Grilled Lamb Chops. Haiz.......... when is mine coming? 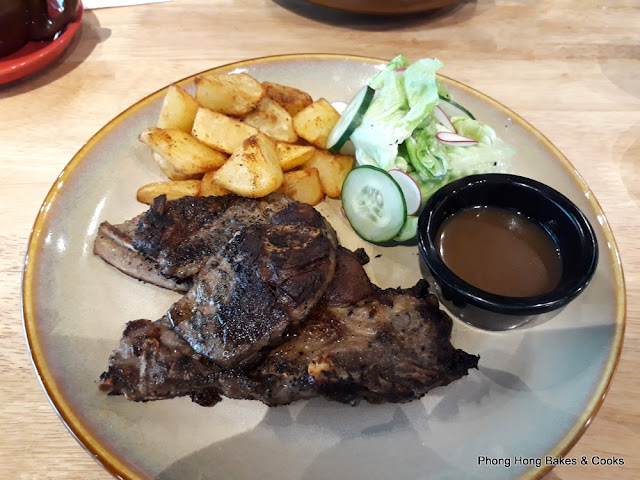 Finally, my Grilled Lamb Chops was served. This better be good. I had no cause for complaint except for the long wait. The lamb was well seasoned but no where near as good as the one I had at Windmill (that post is coming up later, I am not telling my stories in sequence). 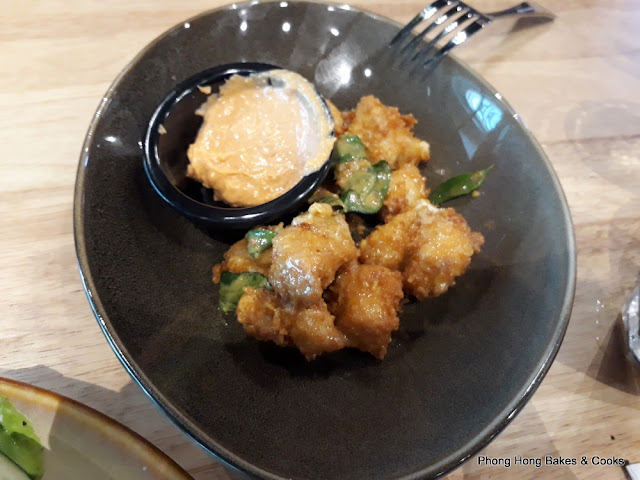 The Salted Egg Chicken Poppers were served at the same time. Note how sloppily they served the sriracha mayo, simply plonked like that. 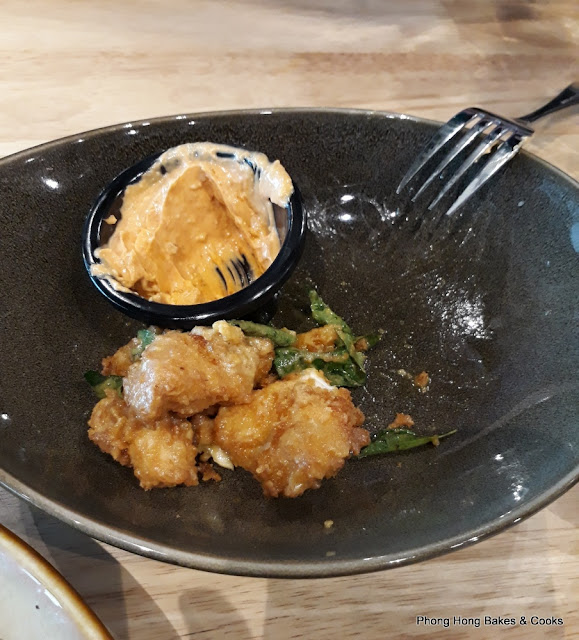 I thought the Salted Egg Chicken Poppers were rather  good. The generous addition of curry leaves amplified the flavors well. As for the sriracha mayo, not so good. It was gunky and tastewise, it did not make much of an impression. 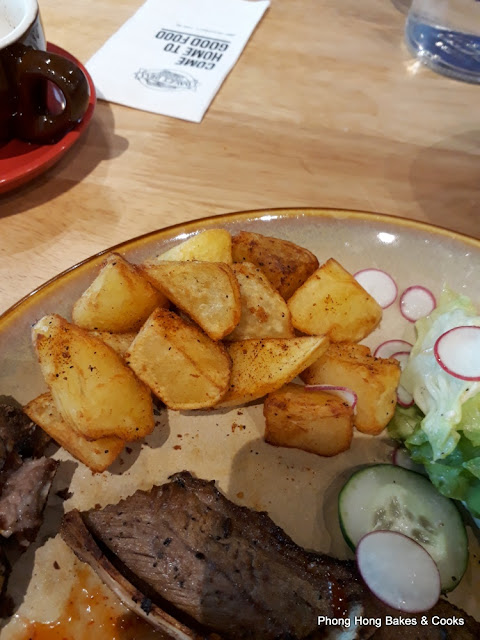 If there is something I have to complain about the Grilled Lamb Chops, it's the accompanying potatoes. There was an unpleasant smell, which I believe came from the oil the potatoes were fried in (though the potatoes are described as roasted in the menu, I think these were deep fried). Like rancid oil.

My brother had a taste but he thought it was OK but then he he had a blocked nose hence his less sensitive sense of smell/taste. Since he was still hungry, he finished my potatoes and whatever that was left of the chicken poppers.

It was my brother's treat and we found out that payment is by cash only as "the credit card machine has not arrived yet". 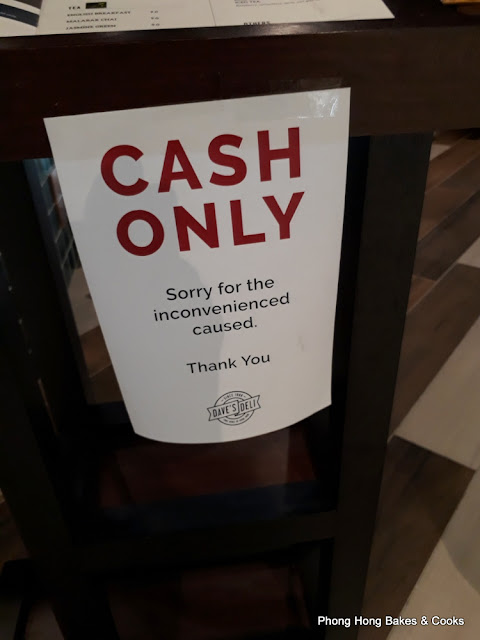 So that was my visit to a newly opened restaurant and I attribute the slow service to teething problems and inexperience. I won't come back so soon, let them settle down a bit first.
Posted by PH at 08:33