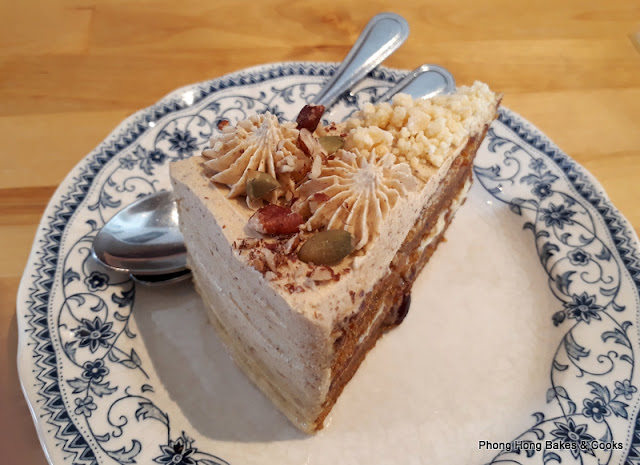 
I thought he had personality + +, he had humor and obviously he had some serious chops in the kitchen. I was rooting for Ahong but sadly he did not win. But hey, there are many instances where losers are the victors post-competition. 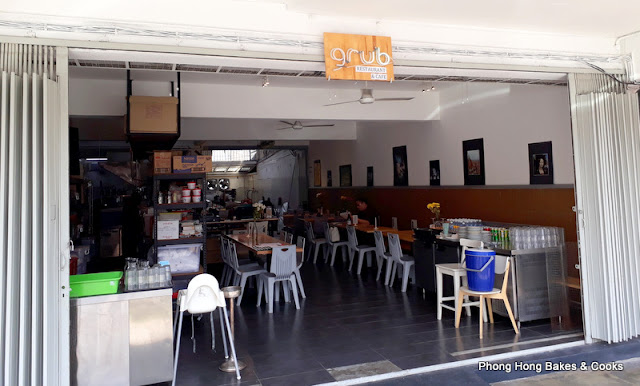 So when I got wind of Ahong's new place in Section 17, I had to visit. It has been ages since I visited Section 17 but I need not worry as my brother did the driving.

These days with Waze and whatnot, you can get to your destination even if you have no sense of direction. Parking is quite a challenge but we were lucky to get ourselves a spot not too far away from Grub. 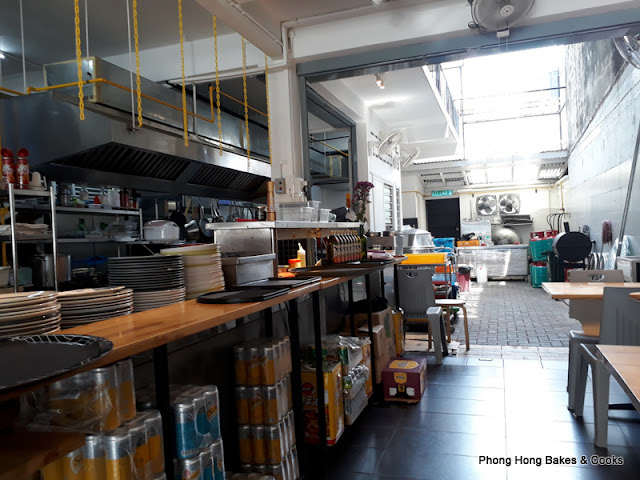 In terms of ambiance, well, the place looks like those old school grocery shops (the ground floor anyway) but that did not bother me at all.

I love down to earth places like this where I feel most comfortable (my selipar Jepun won't look out of place here) and the most important factors to me is service and the food. 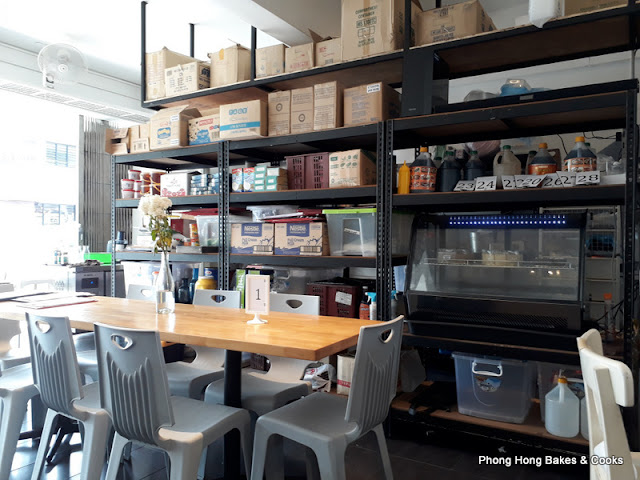 We were there slightly past 12:00pm and seated ourselves at table number 4. Lucky number, eh? It looks like somebody did not like the number and vandalized it. 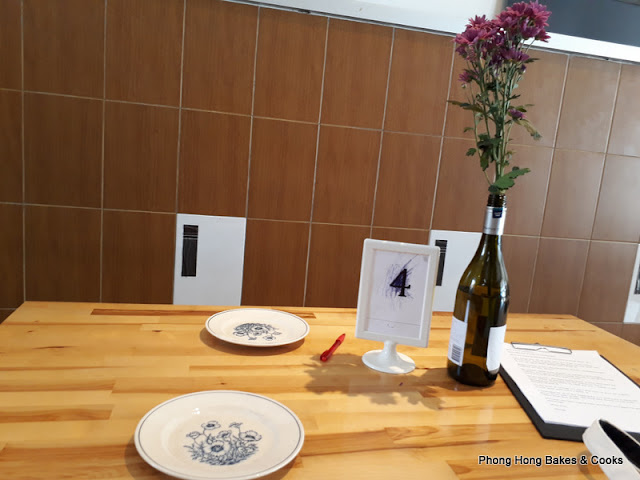 First up, house rules. Read this message from Ahong first. 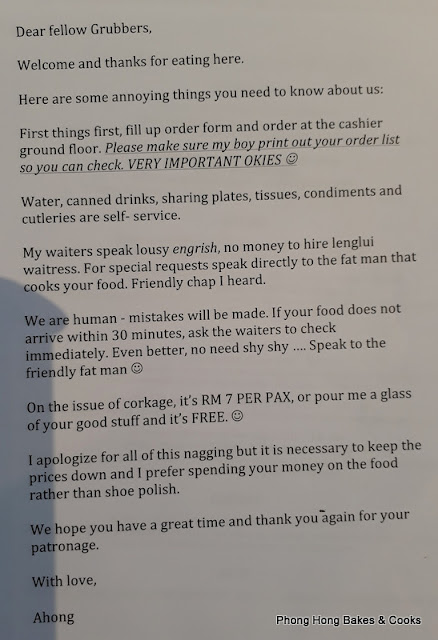 The menu is printed on plain A4 paper and placed on a clipboard. You order by ticking your choices on the order chit. As I have mentioned before, I love this method of ordering. No need to talk! 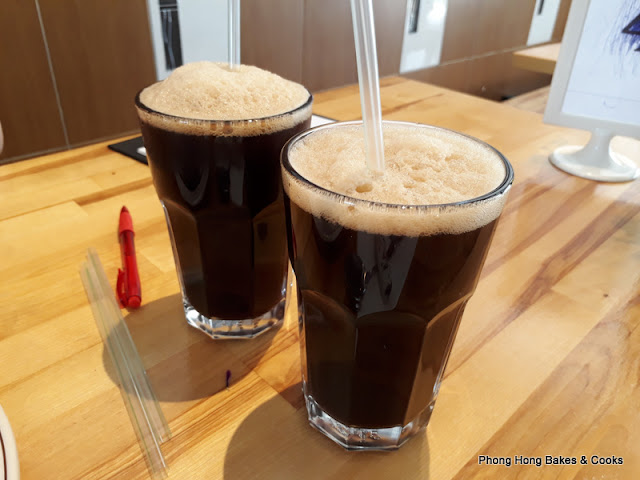 My brother and I were greedy (ok, I was the greedy one) and we ordered 3 mains and an Iced Black Coffee (RM7.00) each. 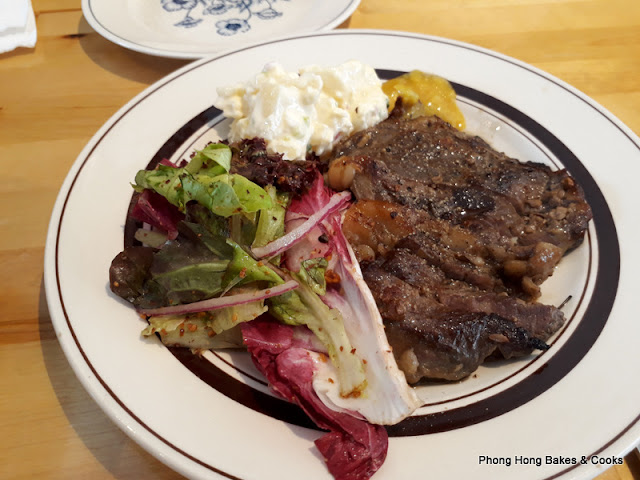 We could not resist the Ribeye, King of Cuts (RM35.00). How did we express our wish for how it was done? No worries, it's on the order chit - medium rare/rare. So I just circled medium rare (note that you don't see "well done" as a choice). 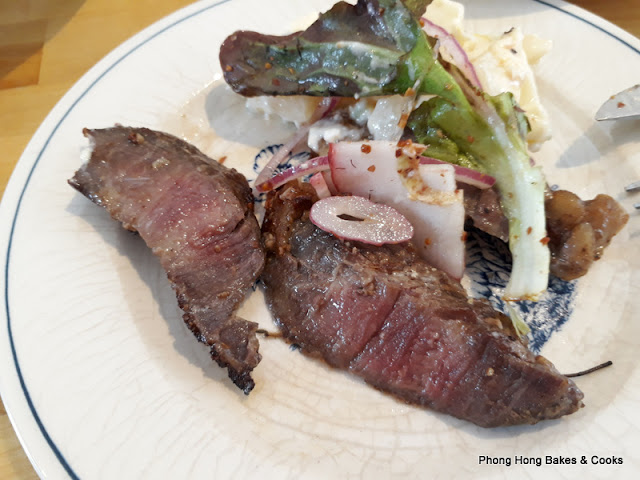 The steak was very well seasoned, tender with none of the  annoying sinewy bits that I have encountered elsewhere. 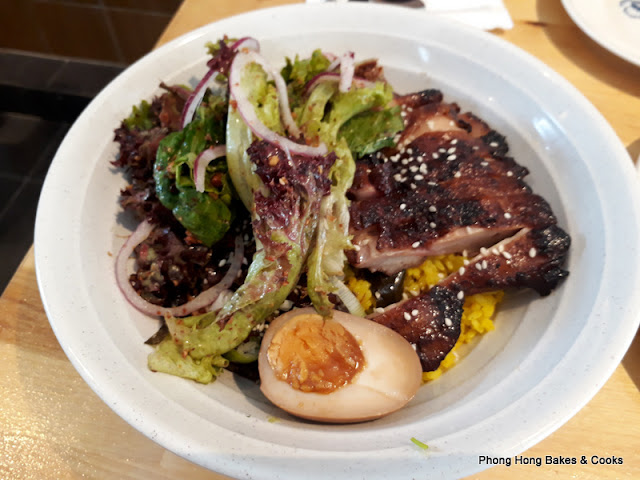 Saturday is cheat day and I want carbs. Loads. So I got us the Chicken Char Siew Rice Bowl (a steal at RM15.50, can easily feed 2). It is a very generous bowl, you get lemon rice topped with a princely portion of grilled chicken char siew, salad and half an egg. Although the char siew sauce is unlike conventional char siew sauce (to my tongue), I had no cause for complaint. 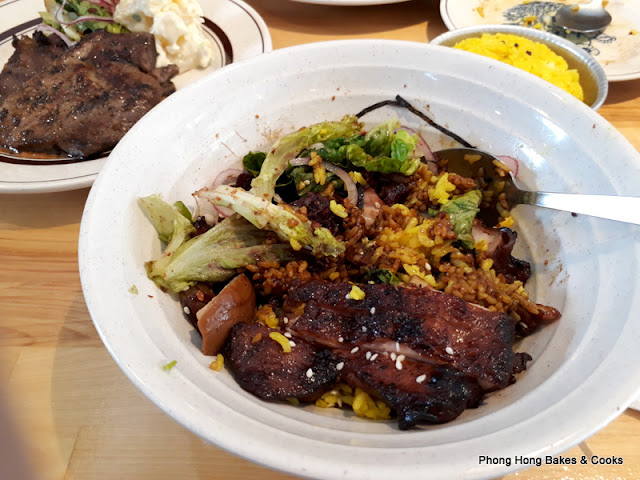 I decided to save my half of the Chicken Char Siew Rice Bowl for my partner (something I have seen Mun doing hee..hee...) and I packed it into my container. 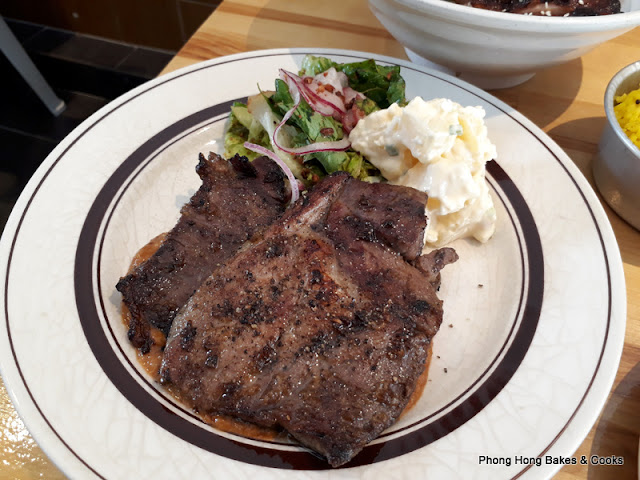 Our third main is the Grilled Lamb (RM30.00) served with potato salad, Mesclun and lemon rice. Underneath the lamb is the percik sauce. 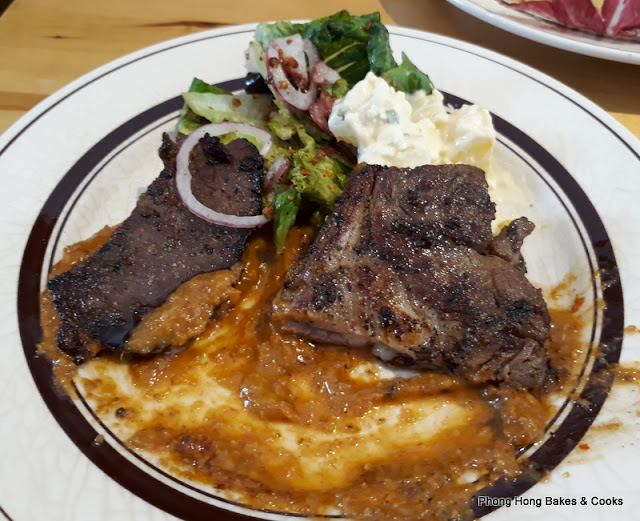 My brother commented that the percik sauce tasted more like peanut sauce (satay), perhaps this is Ahong's interpretation of percik which we liked. I would have loved to have more sauce :) 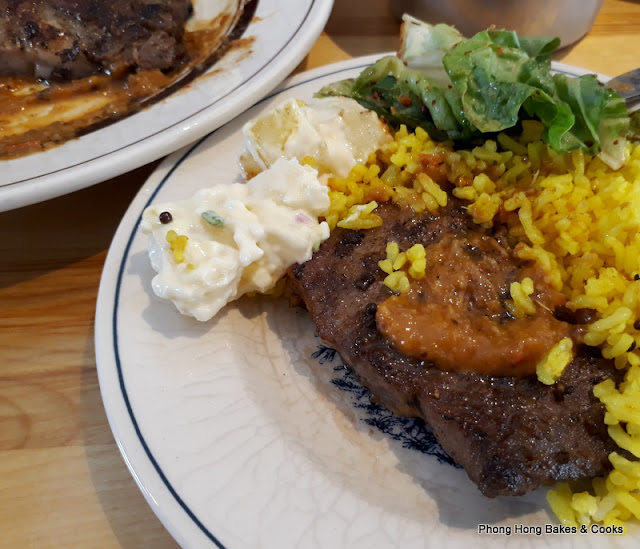 I must say that I enjoyed the lunch immensely. I told my brother that we must come back. This was met with a resounding yes! 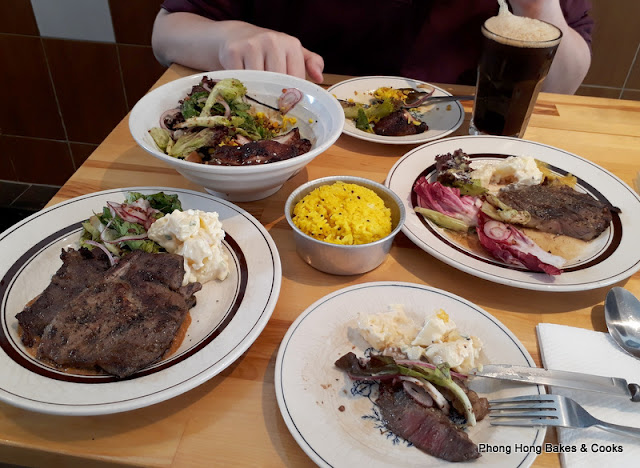 There is more seating upstairs to cater to larger groups of diners as I discovered earlier. You see, I had to take a leak in spite of having gone to the bathroom twice just before coming out. Bah! I think I have a prostate problem but the thing is, I don't have one 😳

We were quite full but we could not leave without having dessert. Due to limited stomach space, we ordered only one slice of cake and we made that a Carrot Cake. 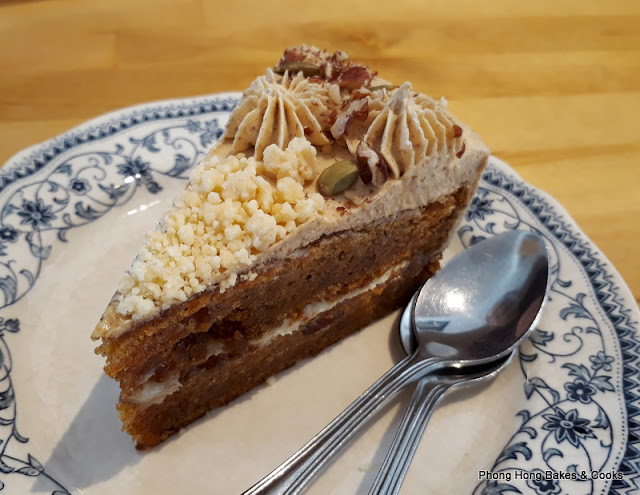 It was lovely, not too sweet with some salty hints. 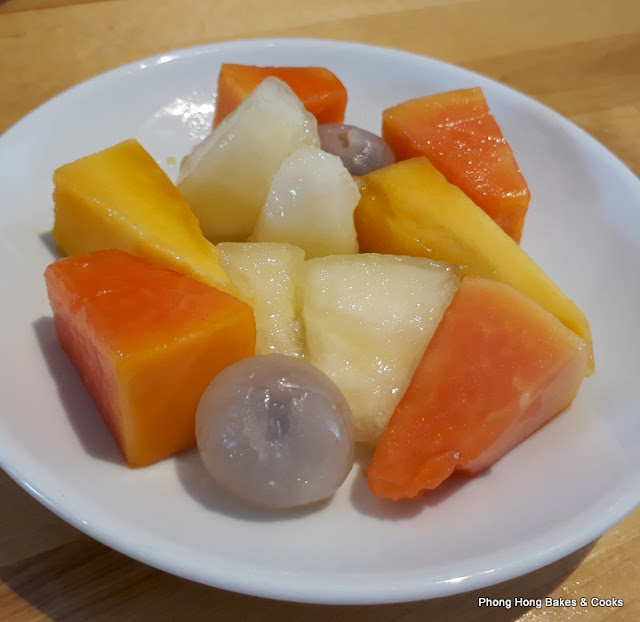 We were very pleasantly surprised to be treated a plate of fruits on the house.

I am so glad we came to have a taste of Grub. Prices here are fair with generous portions and I say we give our support to Ahong & Friends. Then who knows, they may be able to afford lenglui waitresses.

Nothing disappointed me except for one. Ahong wasn't there :(

Ah, well, the man can't be there all the time and I must say that his team capably took care of us in his absence.