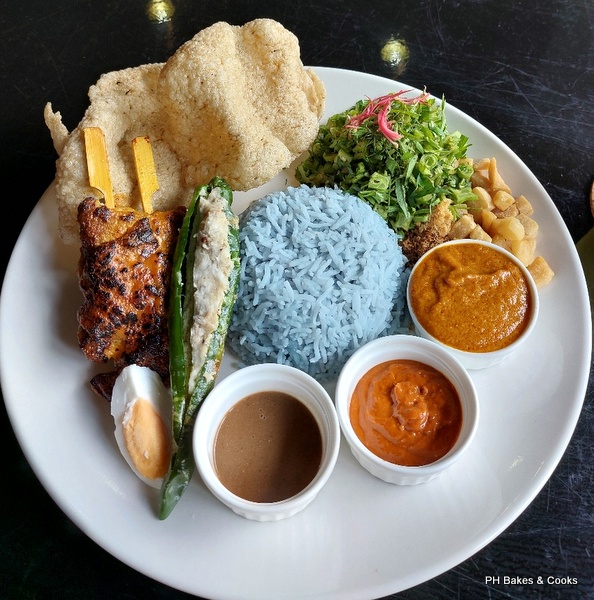 Hungry me ended up at Hungry Bacon @ Damansara Uptown many Saturdays ago. This restaurant is situated at a very quiet part of Damansara Uptown, along the same row as The Ship.
It was past 12:00pm when I got there. I was actually feeling rather uninspired that day and was debating in my head, what and where to eat. 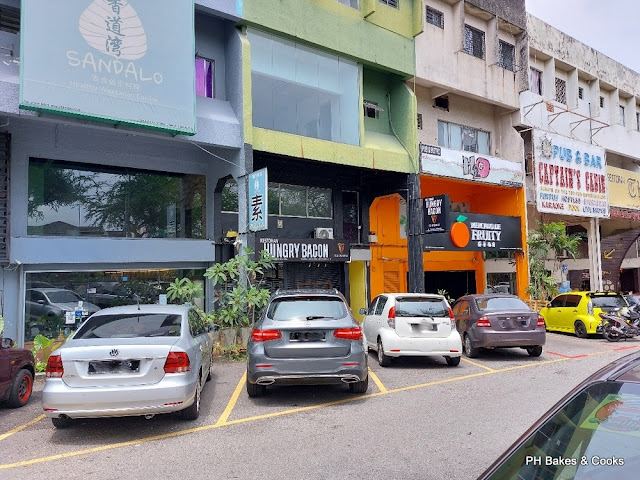 I thought of trying Cafe Lafayette (also along the same row which I eventually did a week or so later) but decided on Hungry Bacon because this eatery does not open for lunch on weekdays. When I got to Hungry Bacon, it was nice and quiet with only one table occupied. I reckon this place sees more business in the evenings. The space is quite small and narrow and I felt rather oversized (and clumsy) when I got behind the table. Notice that the seat is quite narrow. I certainly did not intend to photograph the young lady (who came in much later) at the next table but merely wanted to show you the seat. Ladies with ample behinds (like me and worse for Kim K) we would feel a little unsupported by our seat, if you know what I mean. I had to remove the cushions behind me to make more space for my butt hah..hah...
When presented with the menu, I immediately chose the Assam the Bois and Nasi Kerabu Babi Percik Kembar. 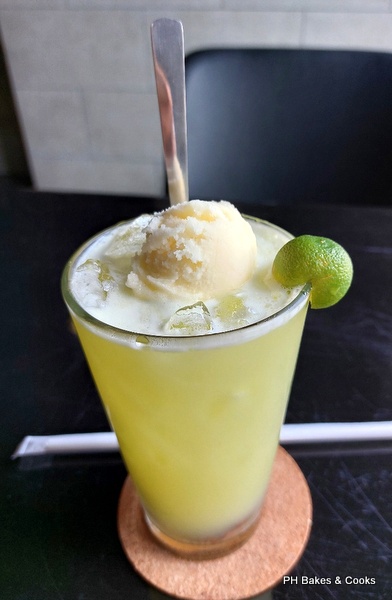 This is the very refreshing Assam the Bois, which is calamansi lime juice with sour plum. It was topped with a scoop of (I presume calamansi asam boi) sorbet. What I loved about Hungry Bacon's version of this popular drink is that it is barely sweet and mostly tangy. Yes! I very like! 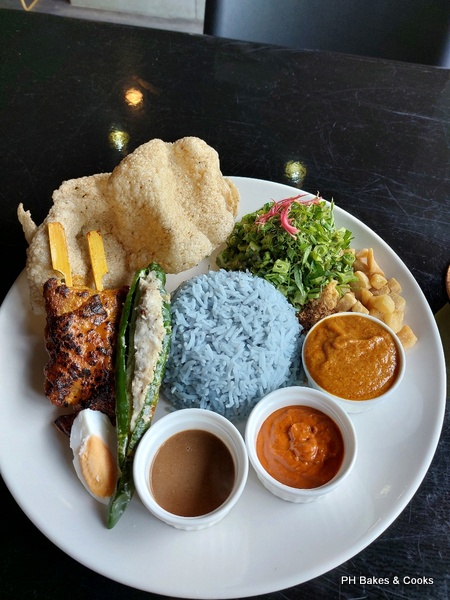 I have seen many photos of the Nasi Kerabu Babi Percik Kembar making its rounds on the internet and was, naturally, very attracted.
It was a bit of a wait for it to be served but it certainly was worth my patience. My plate was served by the chef/proprietor himself who very kindly briefed me on the three sauces and how to eat the nasi kerabu.
The three sauces were - percik sauce, sambal belacan and budu - to mix the percik/sambal (budu is optional and to taste as it is very salty) with the rice and raw vegetables. I appreciated the chef's initiative because not everyone is familiar with nasi kerabu and how to go about eating it. 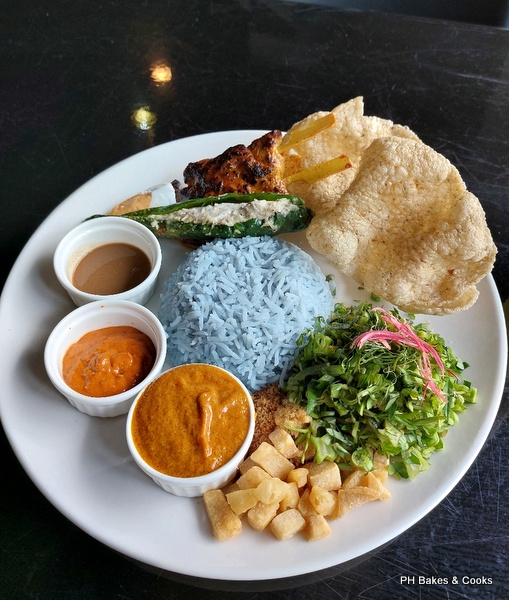 There was a special ingredient on the plate - crispy pork lard! Ooohhh...la...la.... The other ingredients were the blue tinged rice, solok lada, a wedge of salted duck egg, babi percik, keropok, thinly sliced raw vegetables (a generous amount, thumbs up) and kerisik.
So I poured the percik sauce and sambal and mixed into the rice. 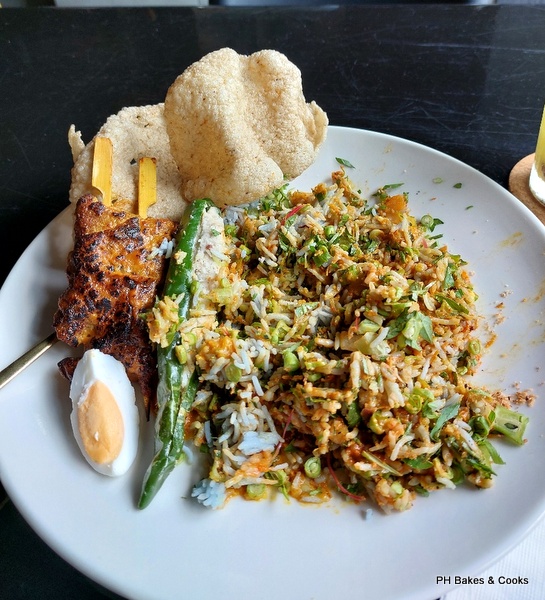 I would say this is a very commendable version of nasi kerabu. The percik sauce and sambal were adapted to the west coat taste, ie more savory than sweet. As someone from Terenganu, I would have preferred a bit more sweet to the taste.
The babi percik well marinated and grilled but still a tad chewy. Had it achieved more yield to the bite, it would have been perfect. This tasty babi percik reminded me of my grandaunt's satay babi.
As for the crispy pork lard, freshness is key or you end up with an unpleasant rancid taste. I'm afraid I bit into two or three of these that gave an off aroma and taste. Thankfully the rest of the crispy lard were pleasant. 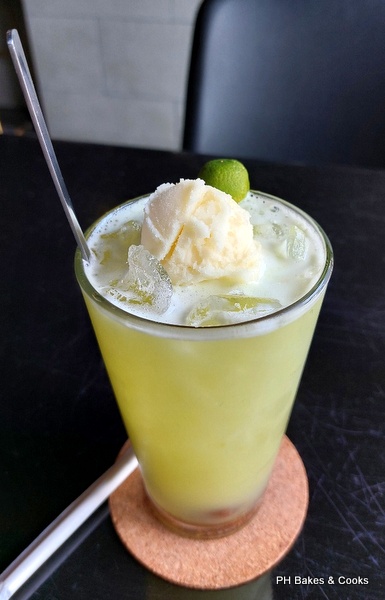 I admit to feeling a little bit jelak after indulging in the fried pork lard, and the Assam the Bois was the perfect remedy to the rescue.
All in all, I had a very pleasant experience at Hungry Bacon and was suitably stuffed. Burp! 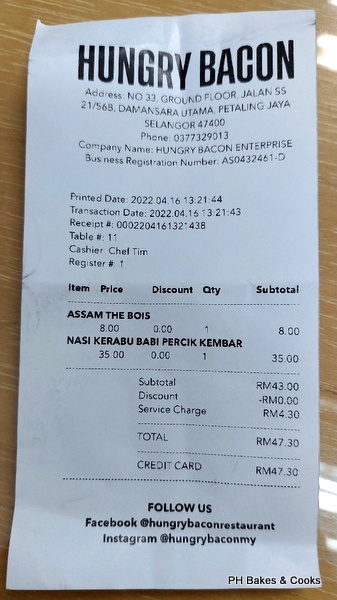 I won't mind coming back to  try other dishes on the menu. 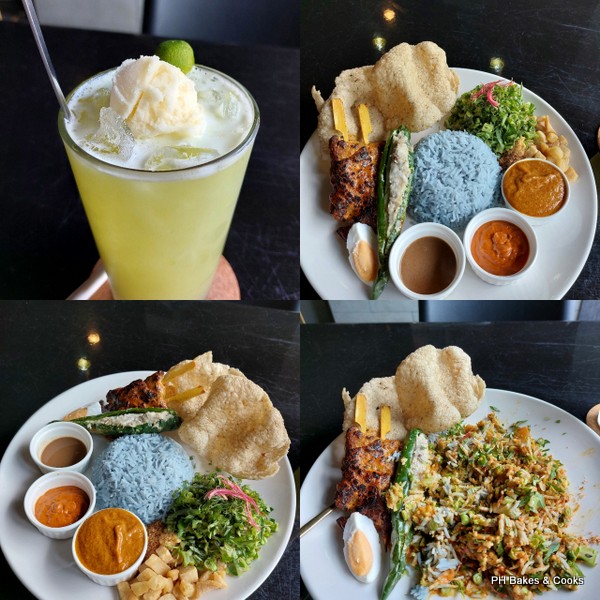