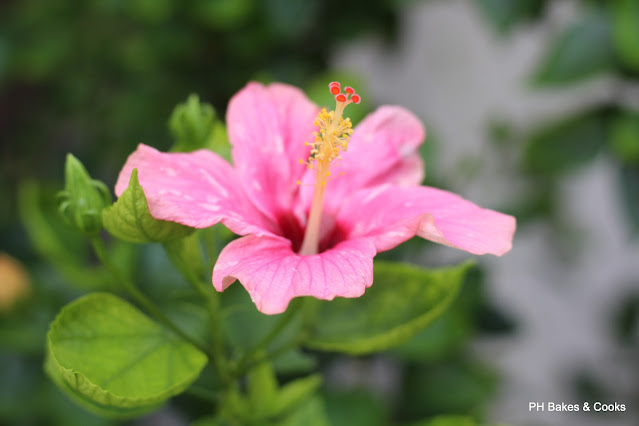 When you have a cat (or in my case two), you will have toilet duties - namely cleaning your cat's/cats' toilet(s). Haiz.... it is not among my favorites chores, that much I can tell.
I usually wash the litter boxes once a month to keep them clean (and not stinky). However, after my booster vaccine mishap, I was practically unable to do any housework let alone wash the litter boxes.
Luckily the smell was kept under control because I clear the "deposits" twice a day and I use baking soda in the litter to control the odor. I also installed this gadget which I briefly mentioned here. 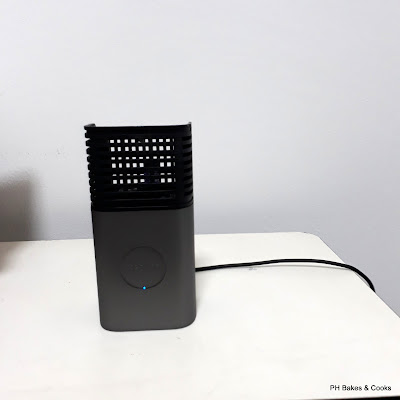 It is an air and surface sterilizer and it also helps with elimination of unpleasant odors.
So to start off my duties, I emptied the leftover litter into my compost. That's the good thing about tofu litter, it is bio-degradable.
These two trays are both washed, dried and disinfected with Dettol spray and left to air for an hour or two. 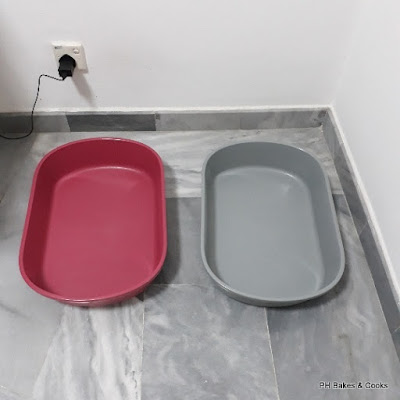 I also washed the hoods. 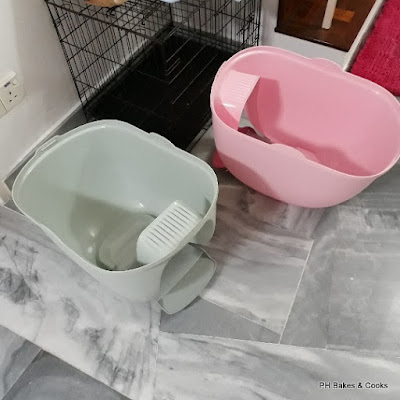 Then this is how I prep my two cats' litter boxes. 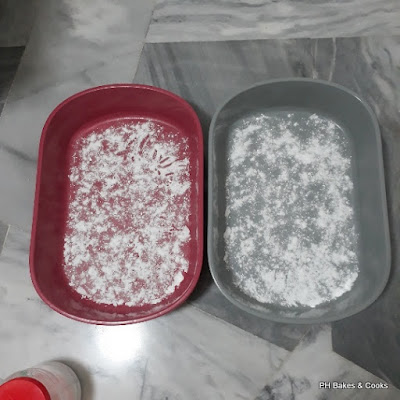 I sprinkle a layer of baking soda onto the trays. This is the baking soda that I use. I also use it in my laundry and recently found out that it can also be used as a meat tenderizer. 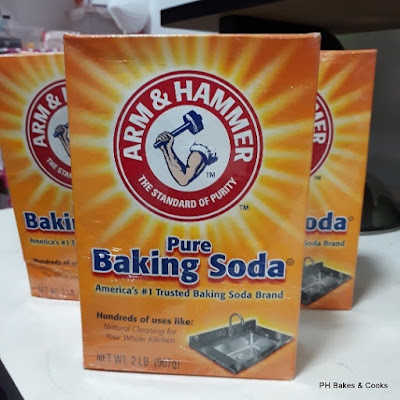 This is the tofu litter that I use. 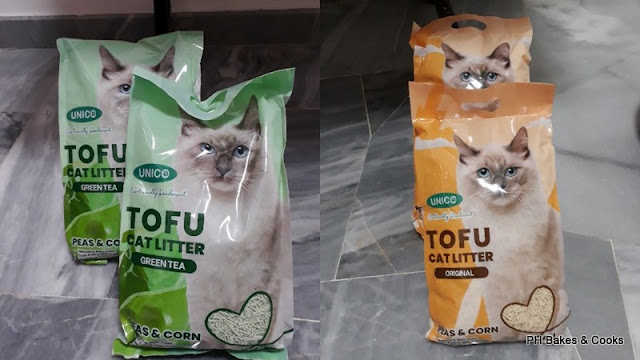 I add a layer of litter (one packet) into each tray and then sprinkle some baking soda onto the litter. Just a thin layer will do. 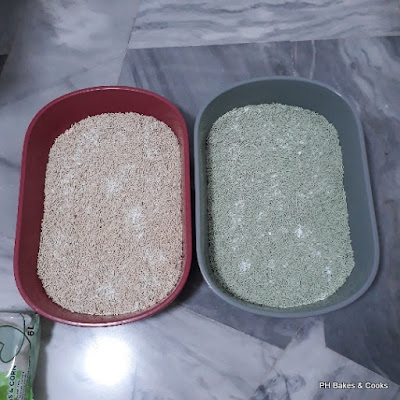 After that, top up with another packet of litter into each tray. 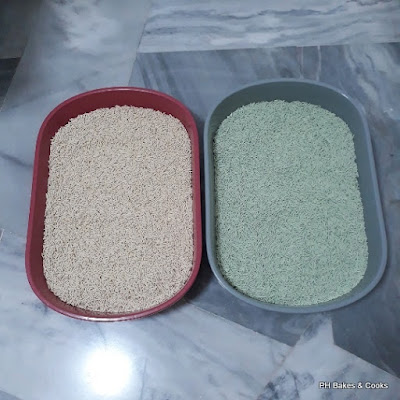 There you go. There is nothing like clean fresh litter. Ahhh... 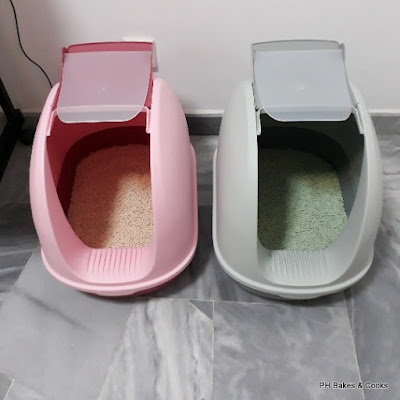 Then put back the hoods. When I first installed these hooded litter boxes, I left the flaps open to make it easier and to encourage my girls to use their toilets. Initially, they refused to use the litter boxes, preferring the open one outside. But they have since accepted their new toilets. 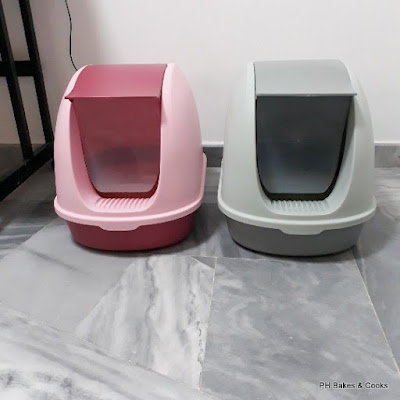 Then I closed the flaps and cats being very clever creatures, they figured out that they need only enter and the flap will open to accommodate them. This type of litter box is easier on the eyes especially indoors as you don't see an open toilet (and the "deposits" hah..hah...). 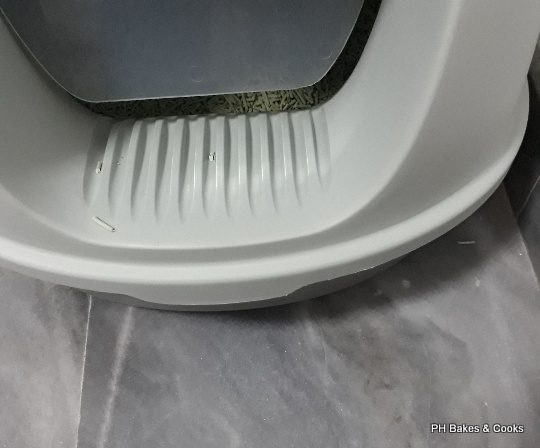 Another thing I like about it is that there is very little tracking when the cat steps out of the box. You only see a little bit of litter on the step (a tell tale sign that your cat has used the toilet) and a tiny bit on the floor. 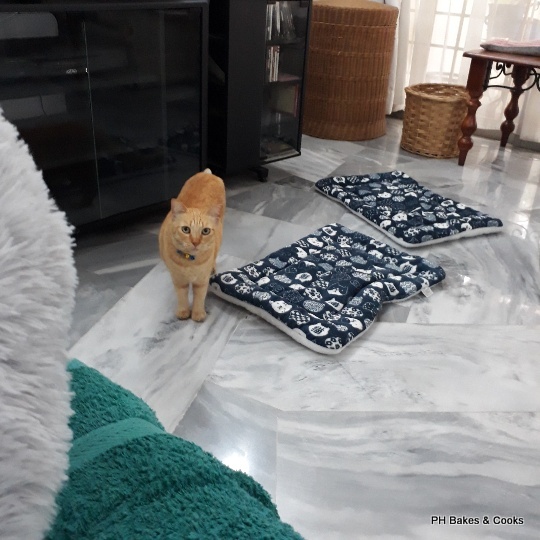 See Girl? The things mommy does for you? 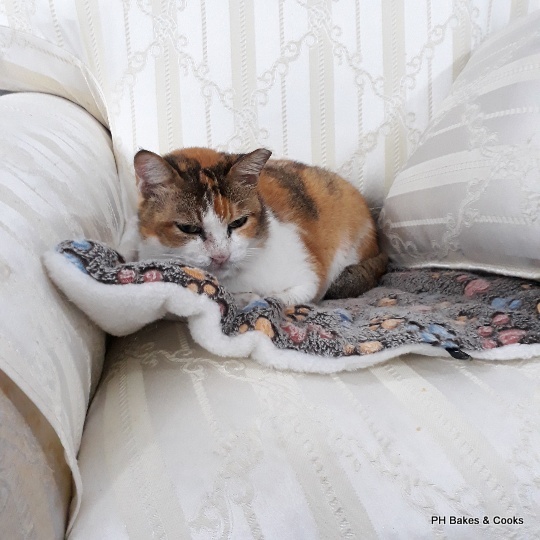 The same goes for your Belle Belle. I never knew I would end up as a toilet cleaner for two cats. Hah!
Posted by PH at 14:56