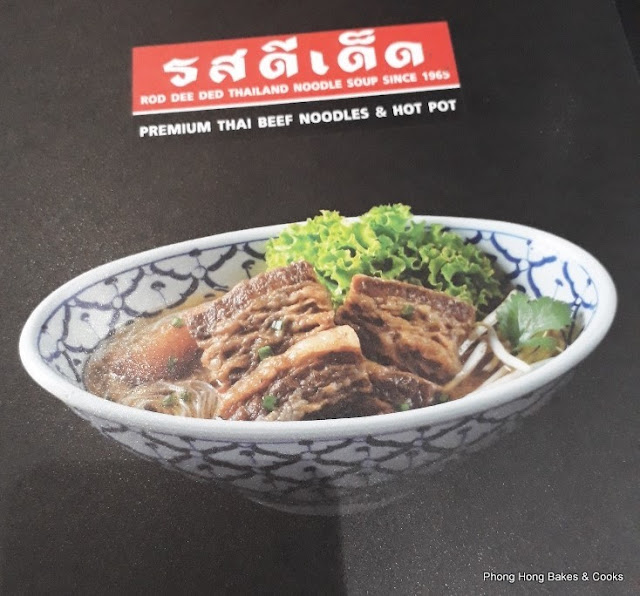 There is this new Thai restaurant with a whimsical sounding name - Rod Dee Ded, which opened in recent months in Damansara Uptown. This restaurant prides itself with serving premium Thai beef noodles and hot pot.


I have walked past a few times and each time, one of their staff who is posted outside would approach me to come try the food. Since this is primarily a hot pot restaurant, I was not sure if it was suitable for a lone diner like me. 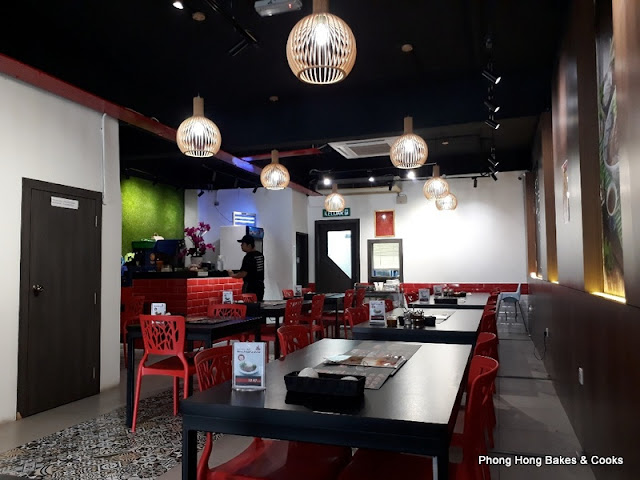 But after reading a few reviews and having an idea of what's on the menu, I decided to pop in to check them out.

It was still early when I visited and I felt a little awkward as most tables were set for larger parties. I did notice two small tables but they was smack in the middle of the floor and facing the entrance. Not so ideal. The server guided me to a bigger table and that's where I sat. 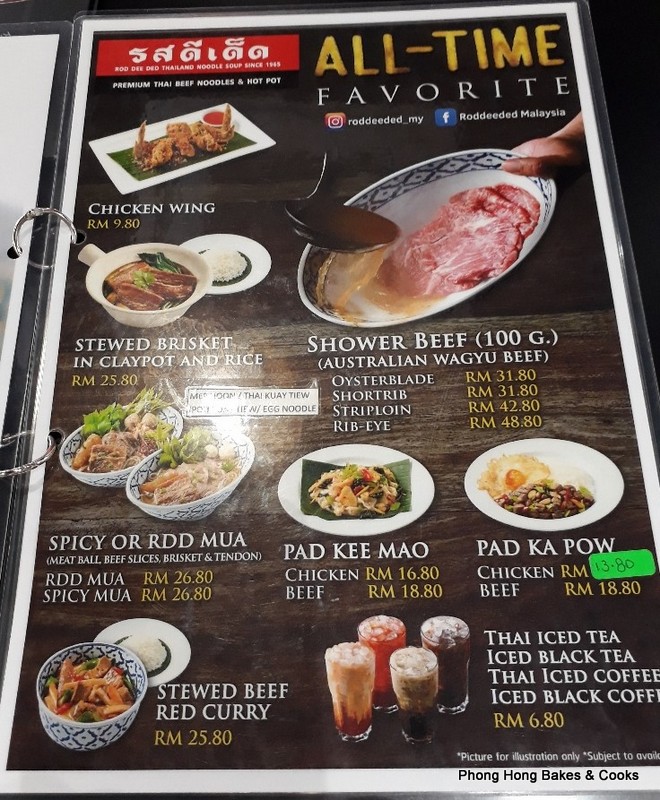 The specialty here is the "shower beef" which is basically thinly sliced beef which you cook at the table by ladling hot broth onto the meat. But I am not going to talk about that. There is already quite a number of reviews on the "shower beef" and I doubt if I would ever get to experience it as my partner does not eat beef and my brother might not be too keen on hot pot. 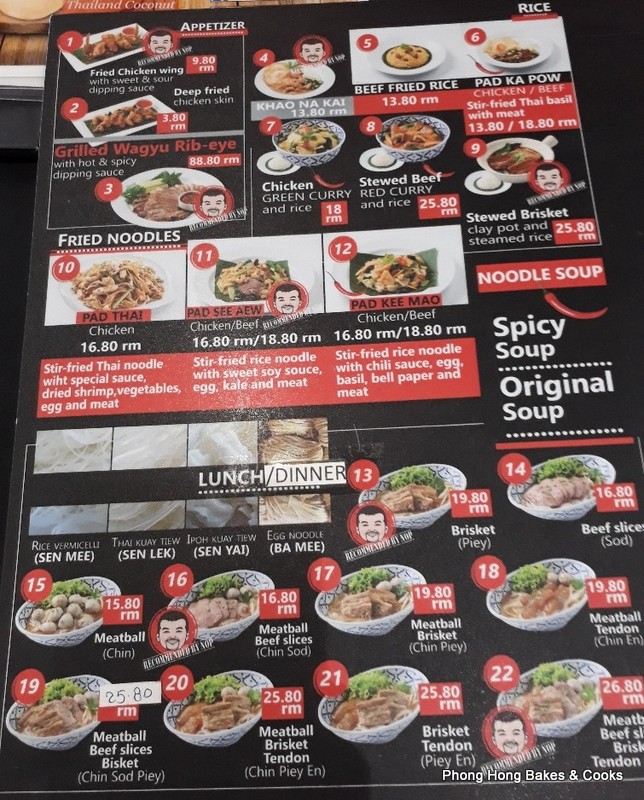 So for the lone diner, you are not left out because there's lots of other items on the menu for you. I was looking forwards to the beef noodles and I chose the most expensive one with all the works. 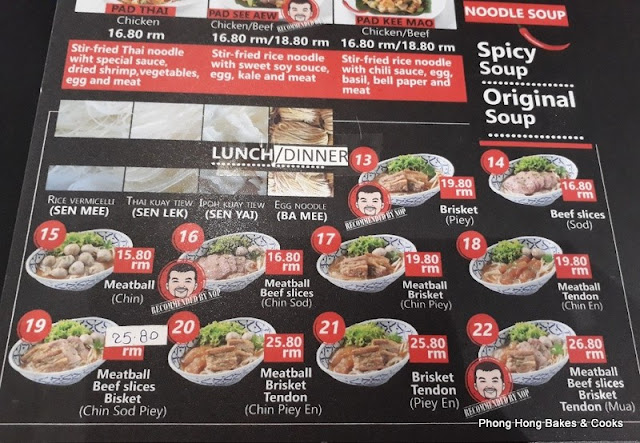 I had the original soup with meatball, beef slices, brisket and tendon with Ipoh kuay teow (RM26.80). At the moment there is a promotion where you get a free drink from a selected list on the menu.

I requested for the Thai iced coffee with no sugar but when the coffee was served it was sweet. 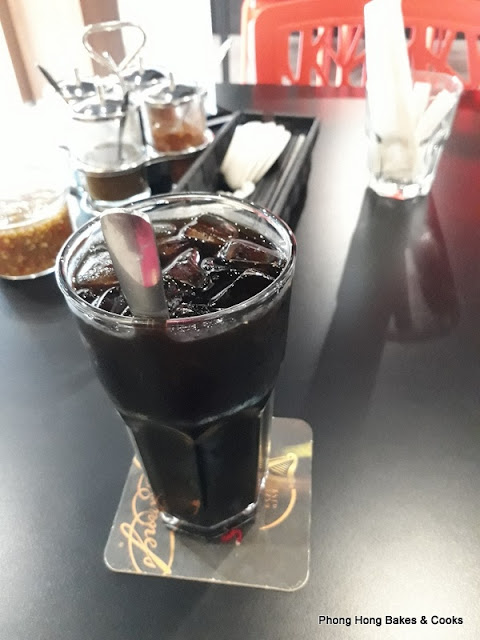 I pointed this out to the server but did not insist on replacing the coffee. Just to let her know that's all. The coffee tasted like local kopi-o to me and I only took a sip or two because I don't like sweet coffee. 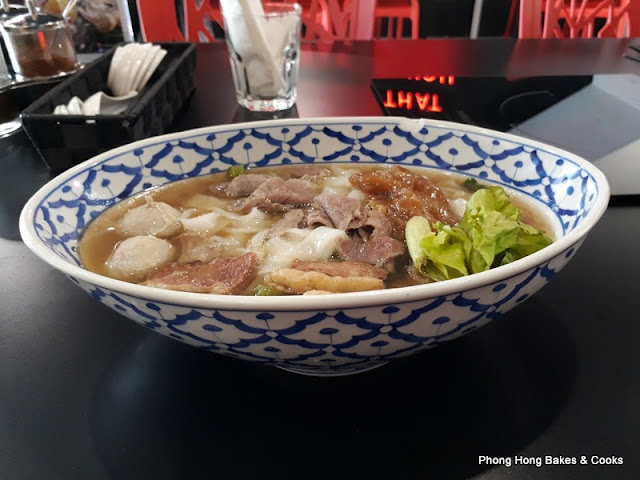 My noodles were served in a boat shaped bowl. It looked like quite a generous serving. 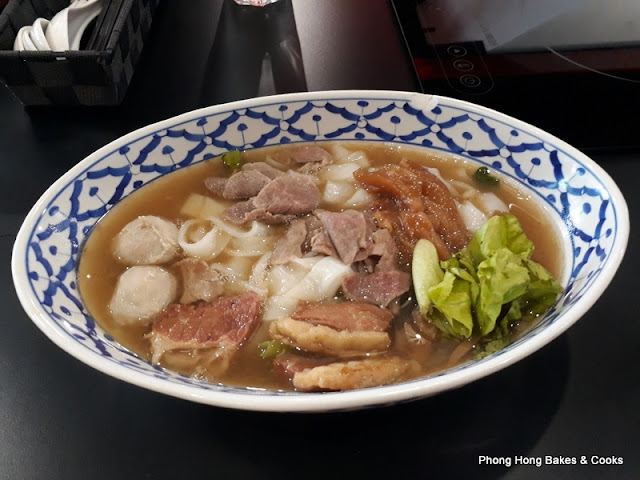 OK. So how was it? I liked the beef slices, brisket and especially the very tender tendon. The meatballs were ordinary. For vegetables, there were some kangkong (not visible in my photo) and some of the stems were quite tough (I welcome it as a form of roughage hee..hee...).

The broth I'm afraid was quite bland. I detected ginger and some sort of herbs and that was it. 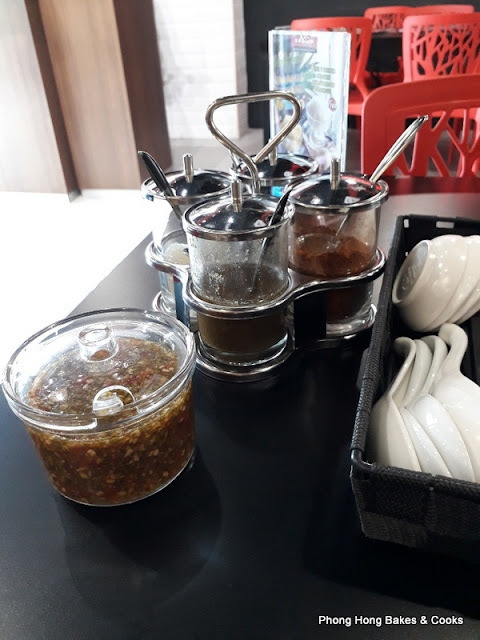 So I had to seek some reinforcement in the form of condiments. 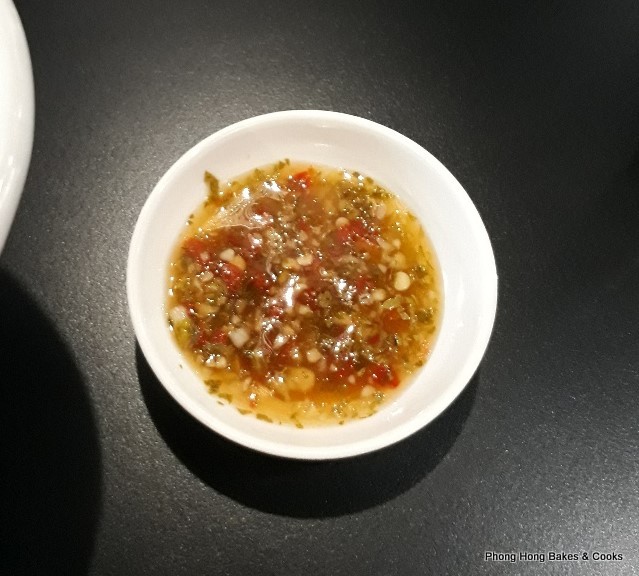 This chili dip was quite good. I finished everything in my bowl except for the broth. 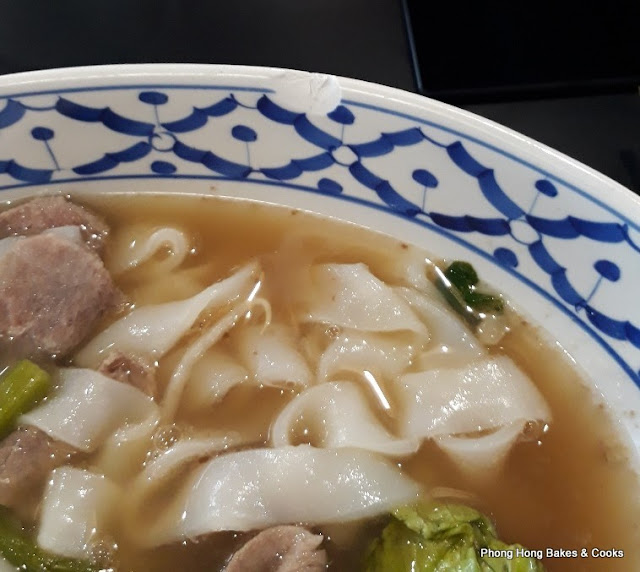 Ooops! I spotted a chip on the rim of the bowl. I also spotted something else. 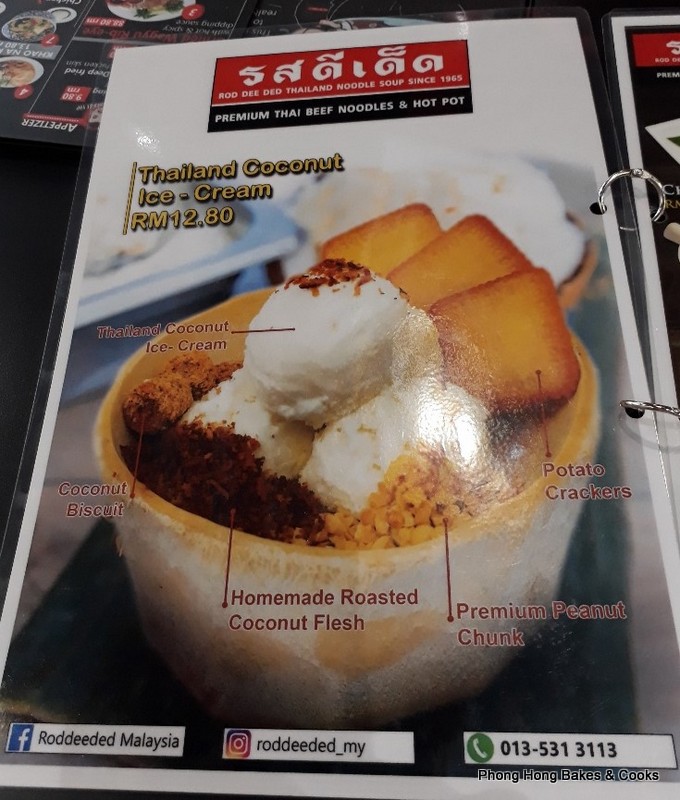 Coconut ice cream! But sadly, the server told me the the ice cream had not arrived yet. 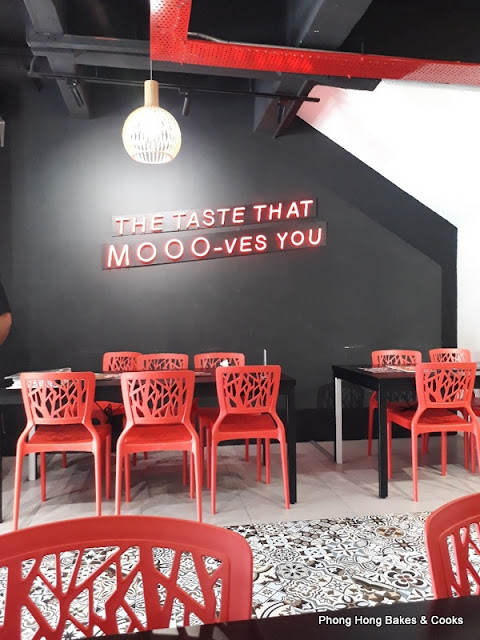 Although I was not moved by the original soup broth, I was willing to come back because I might have caught them on a bad day. Perhaps the broth was not adequately boiled, hence the lack of flavor. Besides I wanted the coconut ice cream hee..hee...

So I came back. 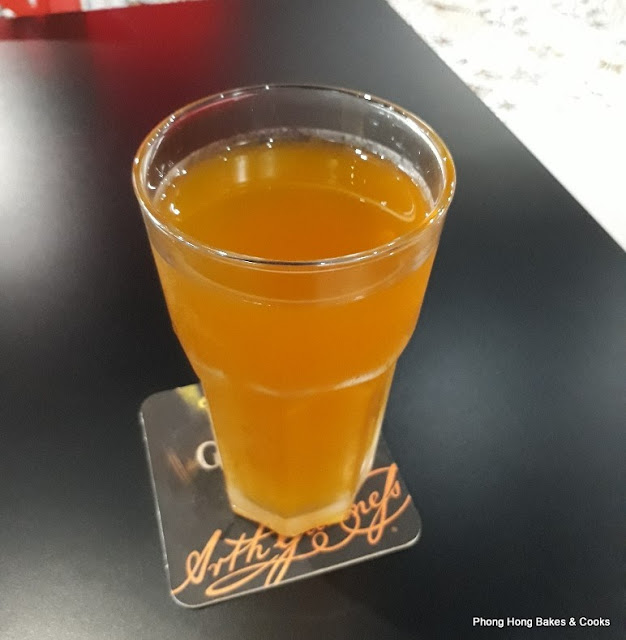 This time I was attended to by a more competent server who informed me that the coffee was premixed and I could not have it without sugar. The only drink without sugar was the chrysanthemum tea. 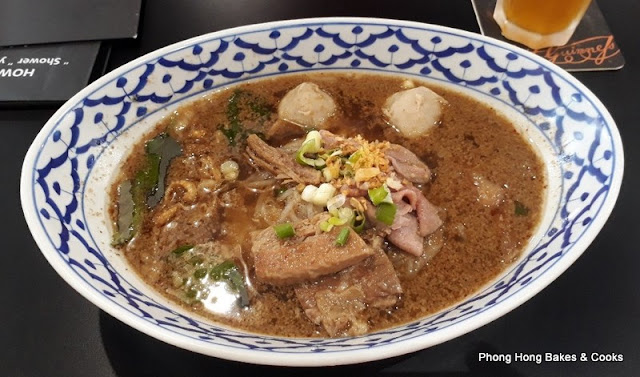 I had the same noodle soup but I picked the spicy one. For the noodles I chose Thai kuay teow which is very fine and looked like meehoon.

When it was served, I detected a beefy smell and I was worried if the soup might be too strong. My fears were unfounded. Oh my! What a difference compared to the original soup that I had earlier. 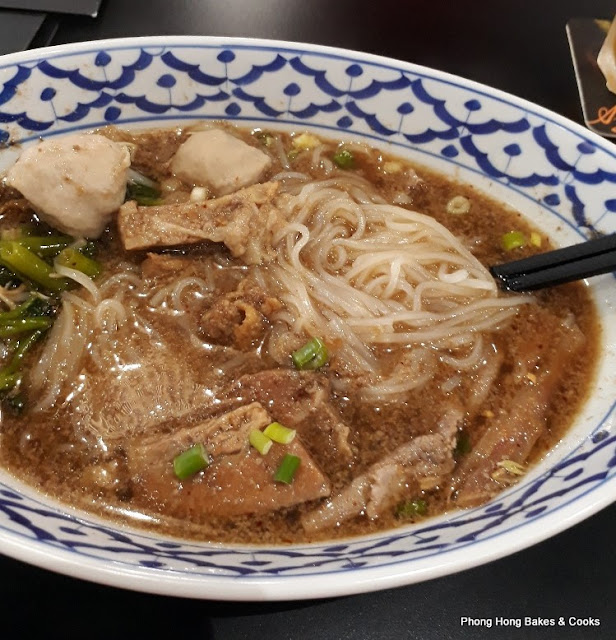 This time the broth was more robust and flavorful (a little sweetish, not overly spicy) and I was relieved. I'm so glad I came back. 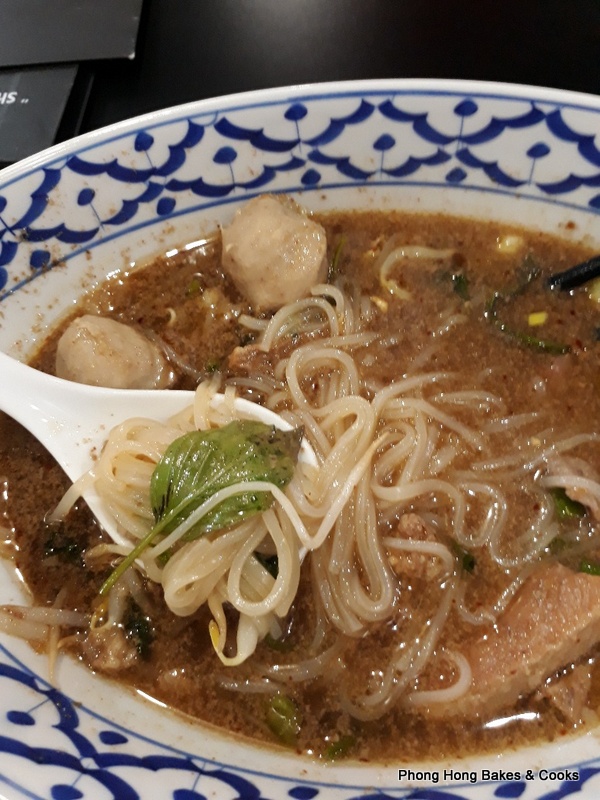 I found one basil leaf in the soup and it would have been even better if there were more. Next time, I must bring along the basil from my garden hee..hee...

I enjoyed the noodles so much that I could have drunk the whole bowl of soup. But no. I had to save space for this ........ 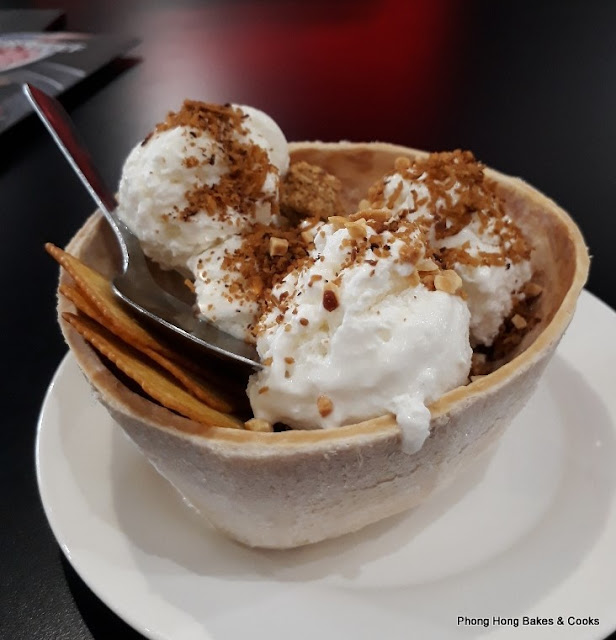 The Thailand Coconut Ice Cream (RM12.80). Does this remind you of Sangkaya? 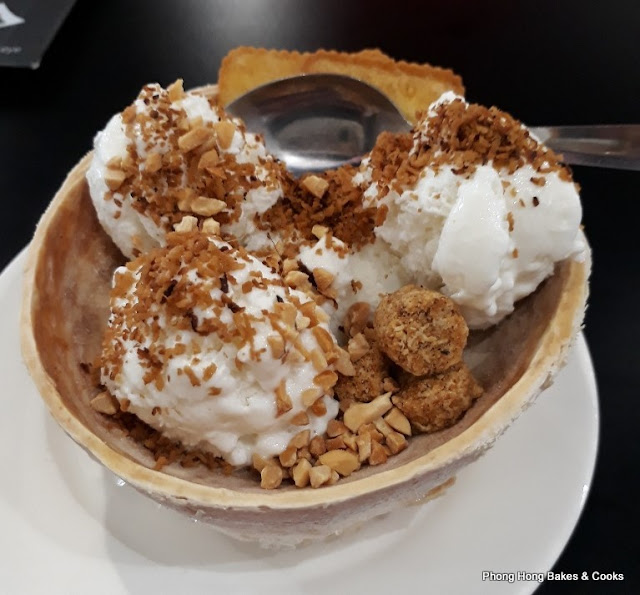 It was very good, very strong coconut flavor and aroma enhanced by a sprinkling of toasted coconut flakes and coconut biscuits. 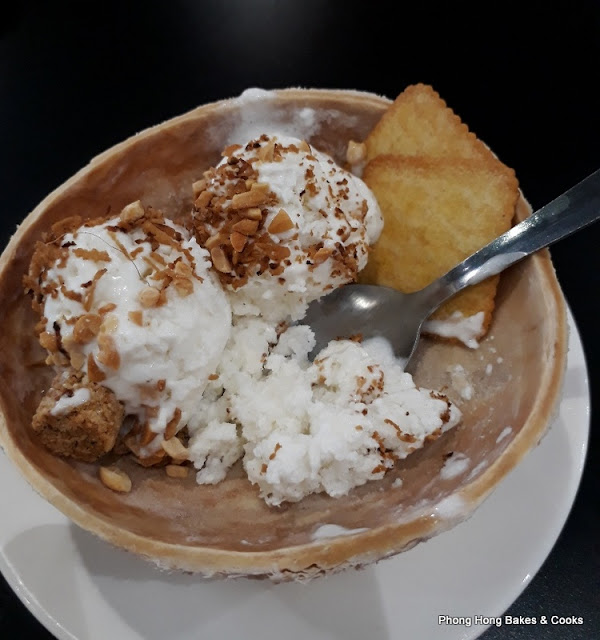 Though the texture of the ice cream is not smooth and creamy (it was more like sorbet) I still liked it.

In all honestly, although this second visit was more positive, the beef noodles were not extraordinary. Memorable but not remarkable. But I will return because I love beef noodles and this is about the best that I can get in this area. Besides, the coconut ice cream is something to look forwards to.