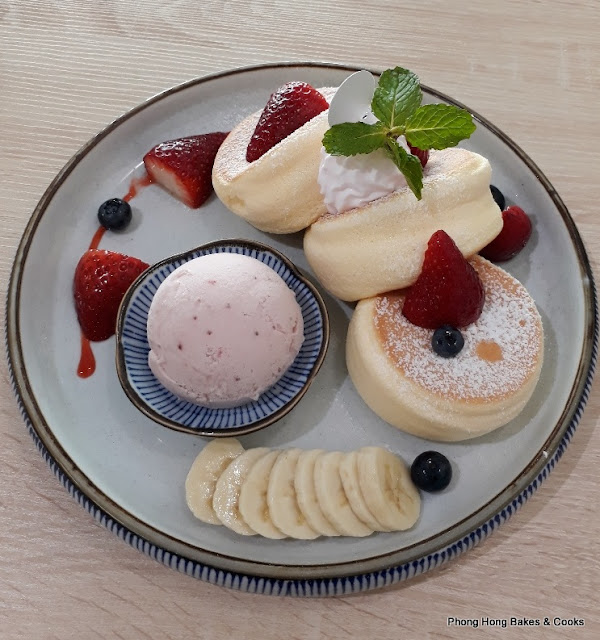 Ever since I had souffle pancakes at Soylab@Damansara Uptown, I have been back for more. The Signature Soyffle wowed me and I had to try the others.


As usual, the lovely cashier (who does a great job) would gently remind me that the pancakes would take 30 minutes to serve. No issues. I only eat the pancakes when I have time to kill. 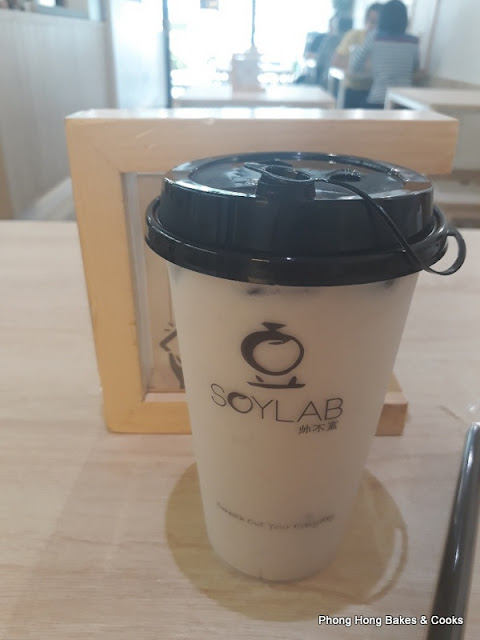 While waiting, I would need a drink. I had the Yam Soymilk (RM8.00, regular). These days they serve the drinks in a sippy cup (which took me a while to get used to) but still provide you with a straw (which I did not use and just set aside). What I like is that the soymilk is only lightly sweetened. Just right for me. 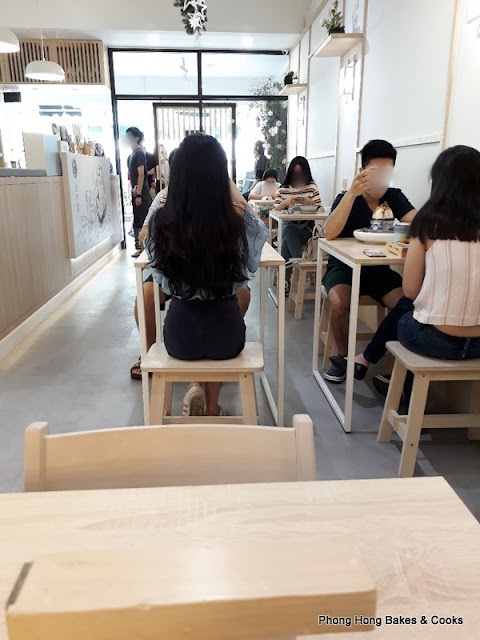 Soylab is obviously still very popular judging from the number of people who walk through the door, mostly young folks. 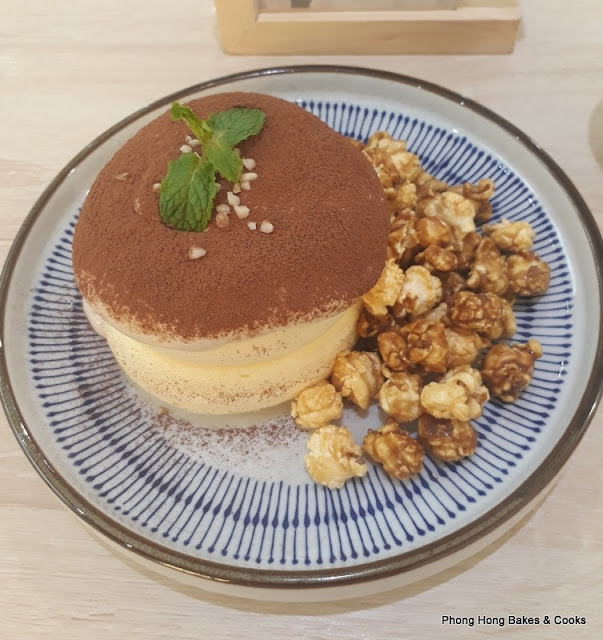 This is the Tiramisu (RM21.00), soyffle pancakes (2 pieces) topped with signature tiramisu cream (heavenly!), dusted with cocoa powder and served with caramel popcorn. 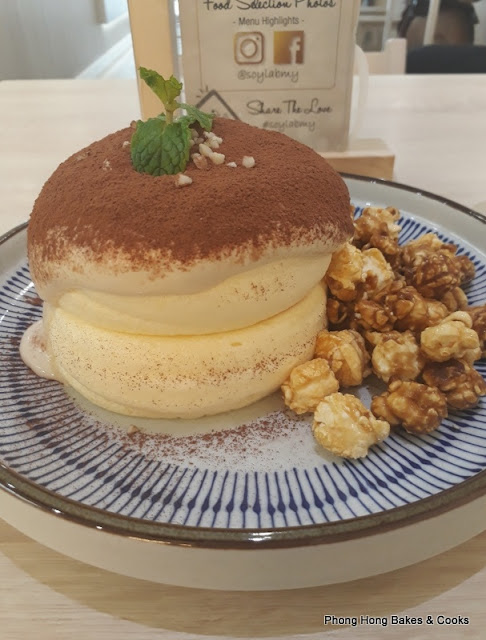 The pancakes came to the table all jiggly and wobbly. When I cut into them, the texture was all soft and cottony and oh wow, eaten with the tiramisu cream, it was sublime, simply sublime! 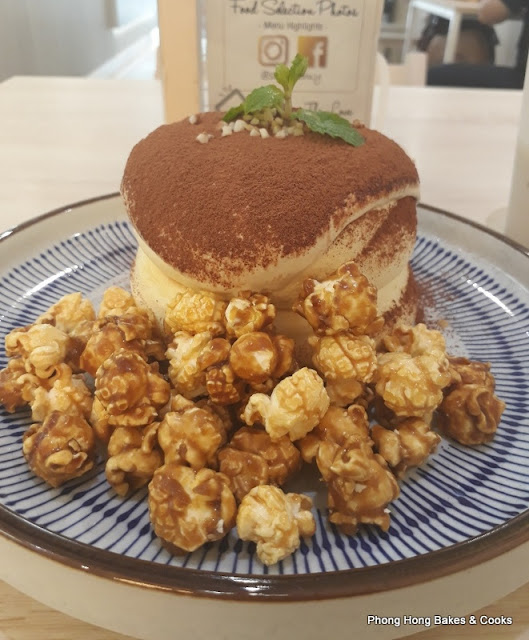 The popcorn was just ok for me, pretty much like the ones I get at the movies, so it was not a highlight for me. But still, it was good for the crunch factor.

Another day, I came back for the Apam Balik (RM20.50), soyffle pancakes (2 pieces) topped with coconut soy cream, brown sugar and served with a scoop of coconut gelato, creamed corn and sprinklings of toasted coconut flakes and desiccated coconut. 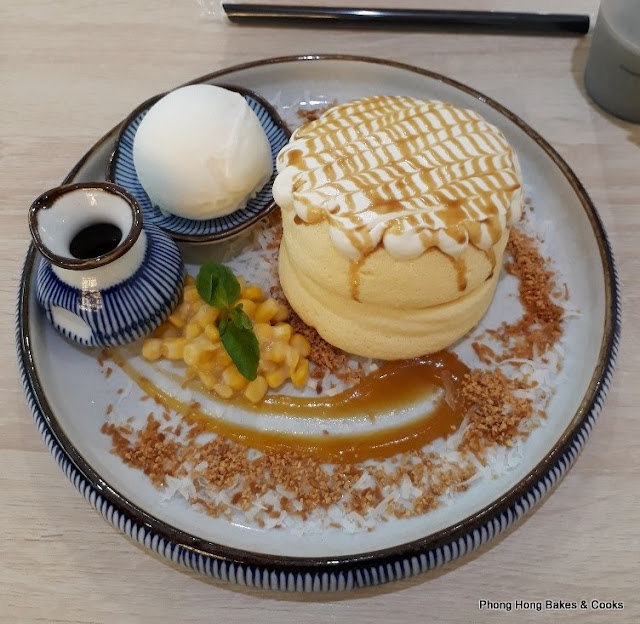 There was also a small container of gula Melaka and a swish of kaya on the plate. 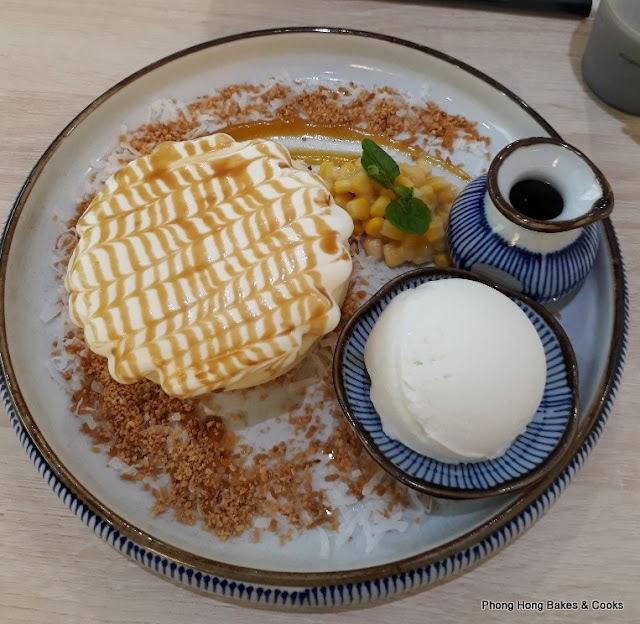 I absolutely loved the coconut gelato. It had a refreshing lightness to it with full bodied coconut flavor. 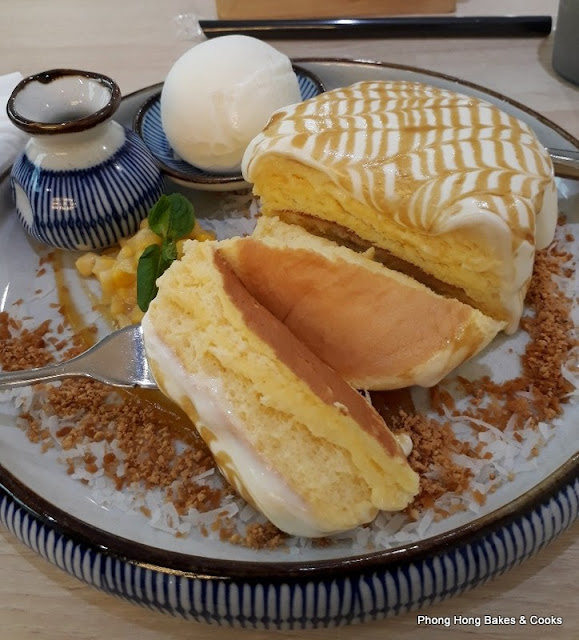 Ahhh.... this whole thing was gorgeous. So darn good! If you eat this try not to let your pancake plonk down like that because you will lose the coconut cream topping. You are given and knife and fork for the pancakes but I feel that a spoon would serve me  better. Next time I will ask for one. 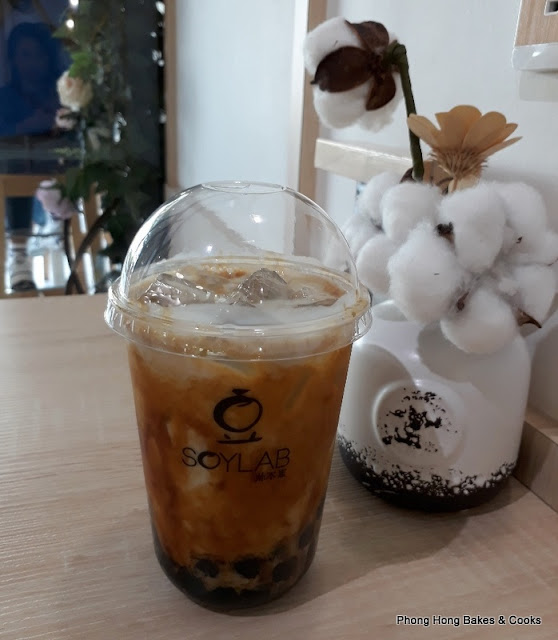 On a much earlier visit I had the Bean Looking for errr...dunno who.... I think it was Bean Looking for Him (RM10, regular), black soybean milk with freshly cooked pearls with homemade sugar syrup. Yes, I was give a straw because you need straw to drink this one. 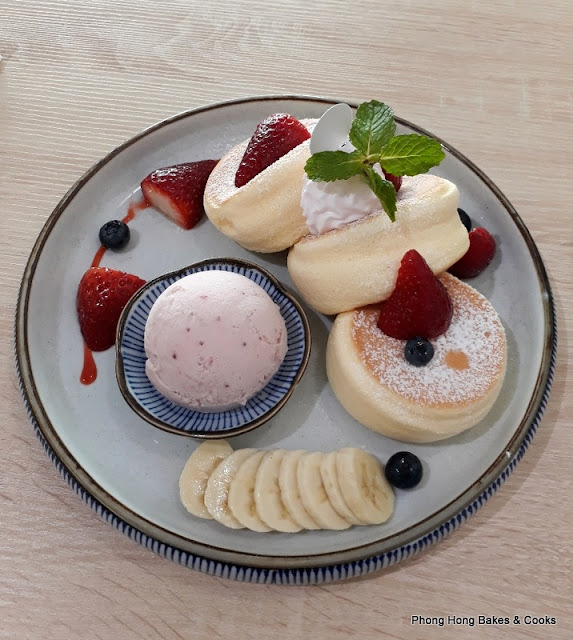 And the pancakes I had were the most visually appealing of the lot, the Merry Trio (RM24.00), soyffle pancakes (3 pieces) with an ensemble of strawberries, blueberries and bananas served with strawberry gelato and jam. 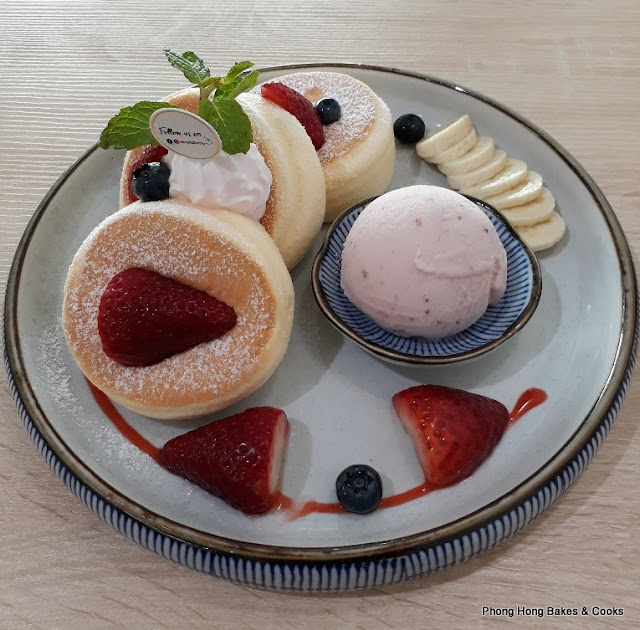 The pancakes as with the first and subsequent visits were perfectly executed - soft, cottony, fluffy and dreamy - all that I want in a souffle pancake. I could eat this everyday and not get tired (but can't afford of course). 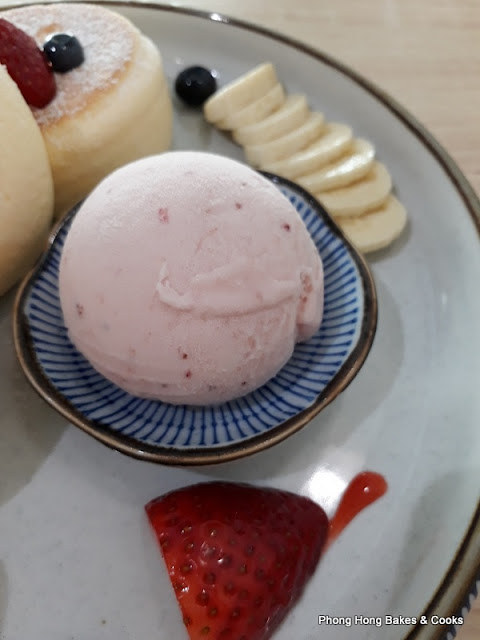 The strawberry gelato did not wow me because the flavors were rather muted. It is hard to get strong strawberry taste if fresh strawberries are used and perhaps this is a good sign that artificial flavoring is not used. 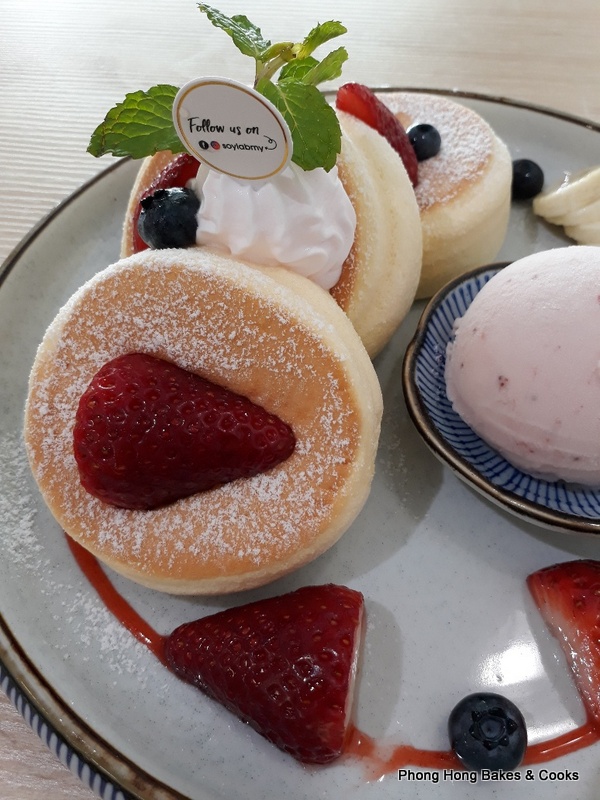 There is one more pancake on the menu - Matcha Read Bean but I will skip that because I do not like matcha flavor, as a drink yes, but for desserts, no.

I won't rule out many more visits because it has been very good and satisfying every time. 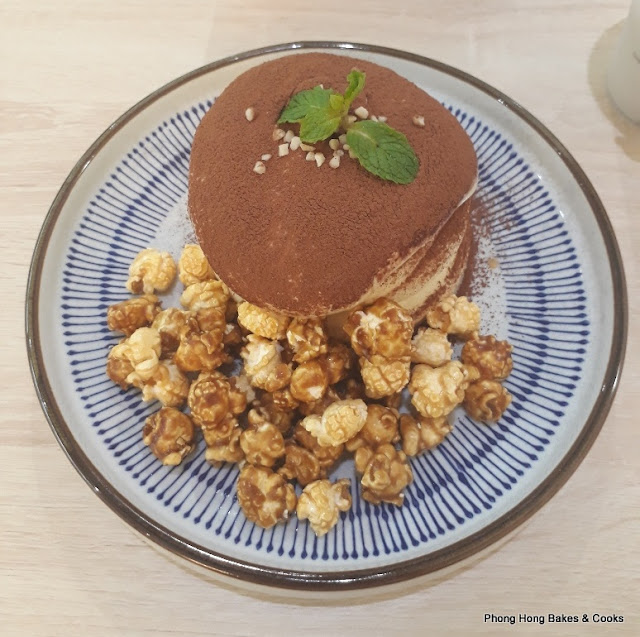