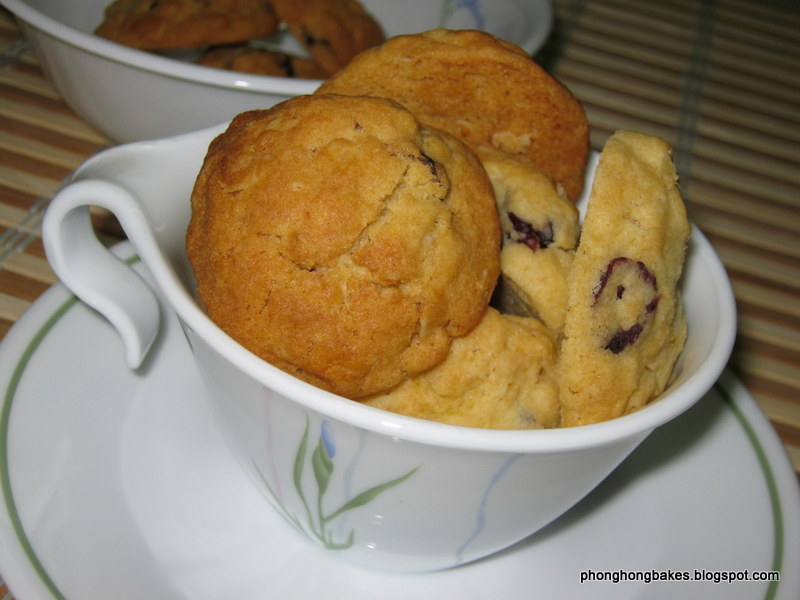 What did I tell ya? That's right, more cookies from me! I cut out this recipe from Amy Beh's Cook's Nook which appeared in The Star on 18 December 2012 and you can find it here. That was way before I was hit by the cookie bug. There I was with a growing stack of cookie recipes and nothing much was happening except that I was stocking up on raisins, cranberries, oats, chocolate chips and what not like there is no tomorrow. And my tin of Nestum was still very much a virgin for almost one year. 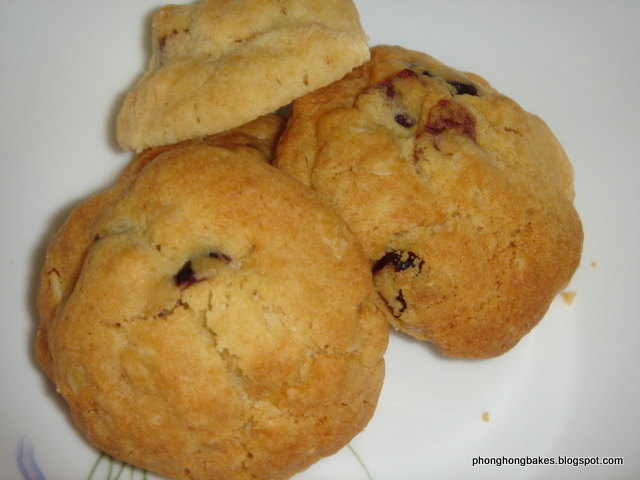 It was only two weeks before Chinese New Year that I was somehow motivated to get my butt moving. My first experiment was with the Cornflakes Butter Cookies which failed initially due to my inexperience. Some of the cookies turned out gritty and some turned out raw in the middle. But I learnt a lot from that cookie which led me to the Red Velvet Chocolate Chip Cookies which was my first successful cookie. 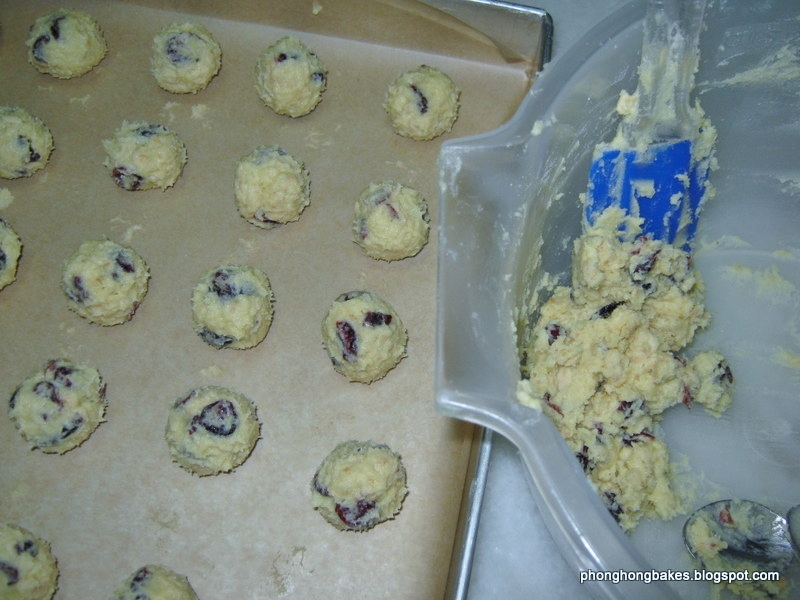 When I studied Amy Beh's recipe, the butter fiend in me declared that the butter content was too low. I know, I know. I should watch my fat intake but this is Chinese New Year territory and I only do this once a year. Besides, I was going to load up the cookies with extra oats which would, I hope trap the fats. Hah! Hah! What wishful thinking. Just as well I didn't make the mark to get into medical school. I would have been banned from cardiology. 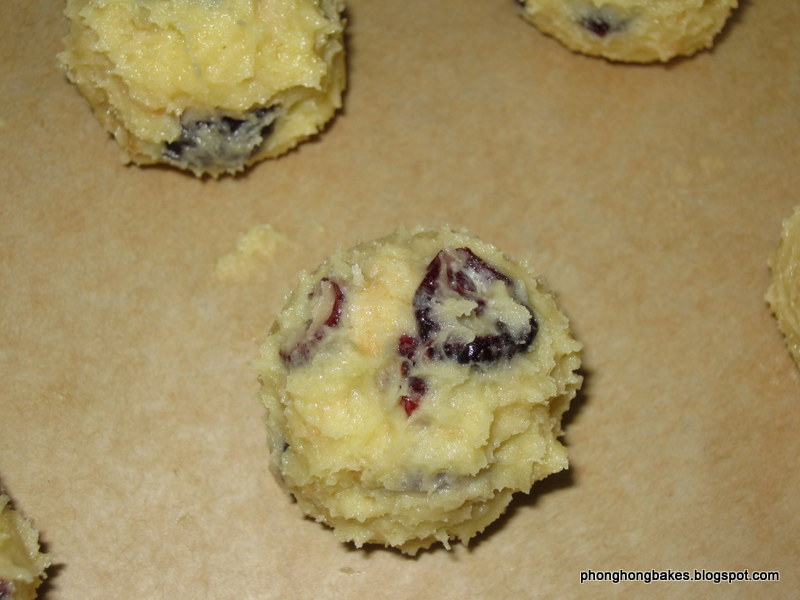 By the way, Valentine's Day has come and gone. How many of you were wined and dined by your other half? Valentine schmalantine, I say. If you think that accountants are the most unromantic people on earth, you are right. My better half, the Penang accountant if you recall from here has an opinion on Valentine's Day. "It's all a highly commercialized venture.  We should not subscribe to such shenanigans", said he or something to that effect. Yes dear, I agree with you. I'm an accountant too. 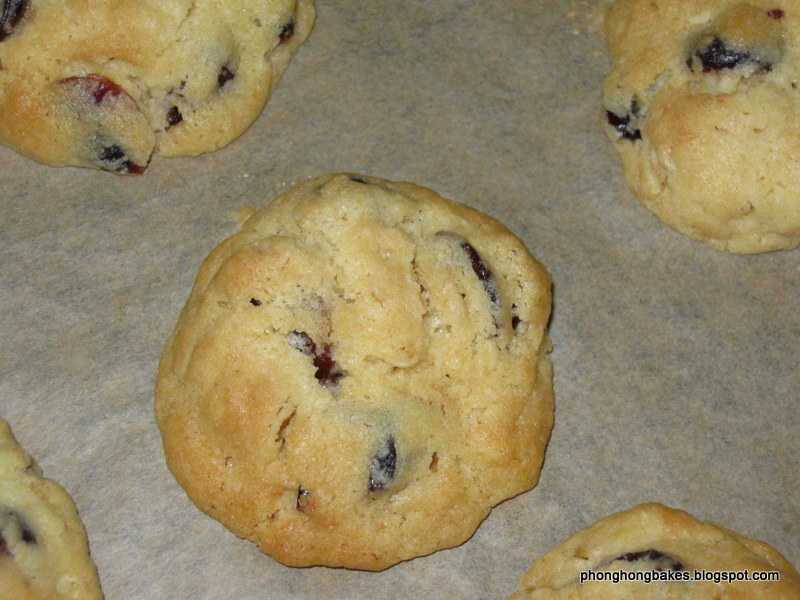 And how many of you love those sappy romantic love songs? When I was in Assunta circa 1982/1983 the girls would go wild when the school band played Endless Love by Lionel Richie and Diana Ross while I was trying very hard not to throw up. Songs like When I Need You (Leo Sayer), If You're Not The One (Daniel Beddingfield) and The Power of Love (Jennifer Rush) are the sort of songs that I simply cannot tahan. Back then, I was into heavy metal (yeah!) with the likes of Kiss, AC/DC, Judas Priest and Van Halen. 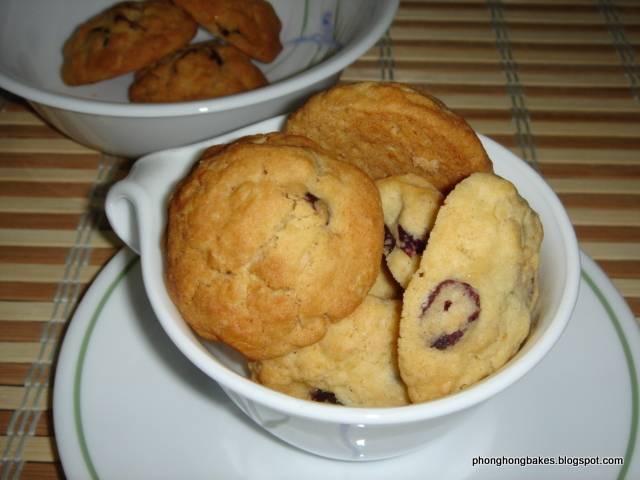 My mum was very strict when I was growing up but she was quite liberal when it came to the music I listened to. It was fine with her if I saved my pocket money to buy Iron Maiden's latest cassette (back then there is no CD). Come to think of it, my mum is very sporting. One time I asked her to pick up Van Halen's latest cassette from the now defunct Kimisawa. The shop assistant told her point blank "Auntie, that one is rock you know!" 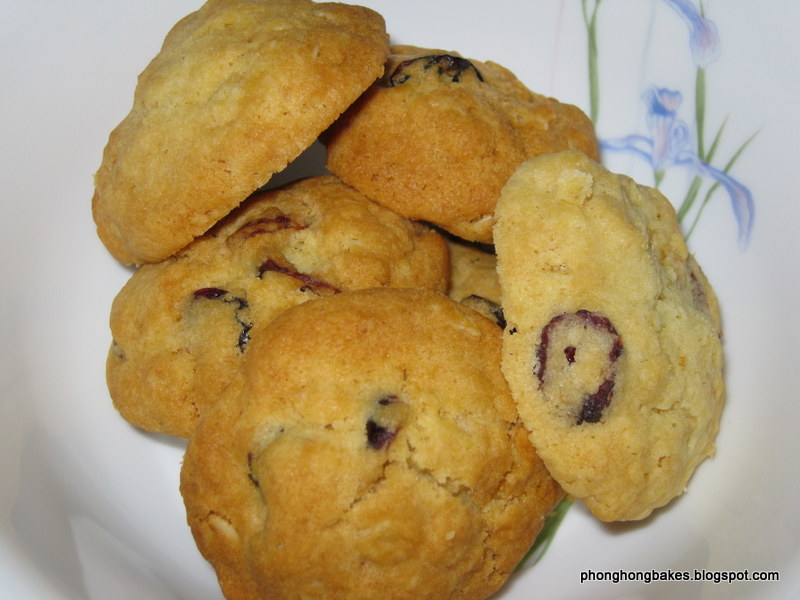 Well, that was a bit of story from Auntie Phong Hong's teenage years. And I still don't like sappy romantic songs. The closest thing to a love song that I will listen to is Joan Jett and the Blackhearts' I Hate Myself for Loving You. And I used to fantasize about becoming a rock star playing bass guitar on stage.

Before I left school after the SPM exams, we were required to fill up a form and one of the questions is "What if your ambition?". We were given three options and to the amusement of my classmate Carina, I listed 1. Rock Star, 2. Accountant and 3. Doctor. Well, at least I achieved option number two. Way to go, Phong Hong! 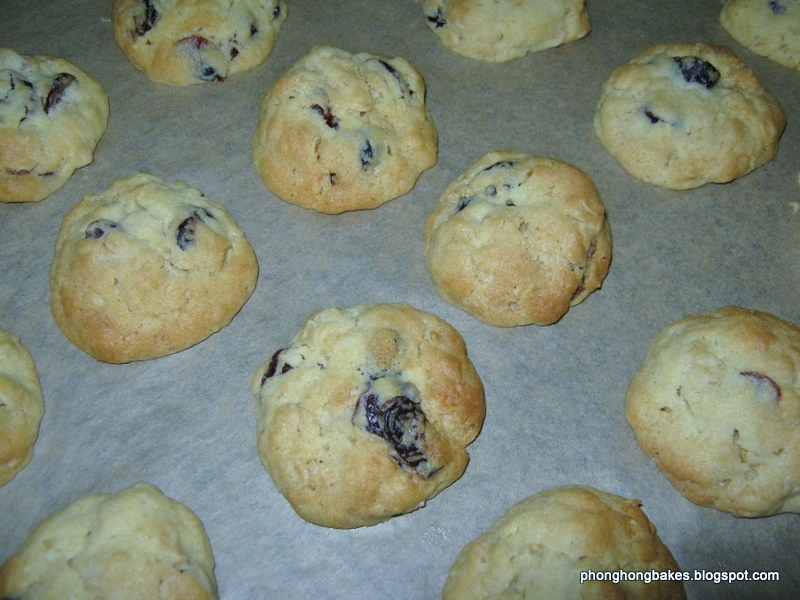 Method :
- Cream butter and sugar until light and fluffy.
- Add egg and vanilla essence and mix well.
- Add oats and cranberries and mix well.
- Fold in flour and mix until mixture becomes a dough.
- Pinch a small amount of dough and roll into a small ball.
- Place on a lined baking tray, spacing the cookie dough about 1 inch apart.
- Bake in preheated oven at 160C for 15-16 minutes for a softer chewy cookie or 18 minutes for a crunchy cookie (you need to adjust oven temperature and timing according to your oven) 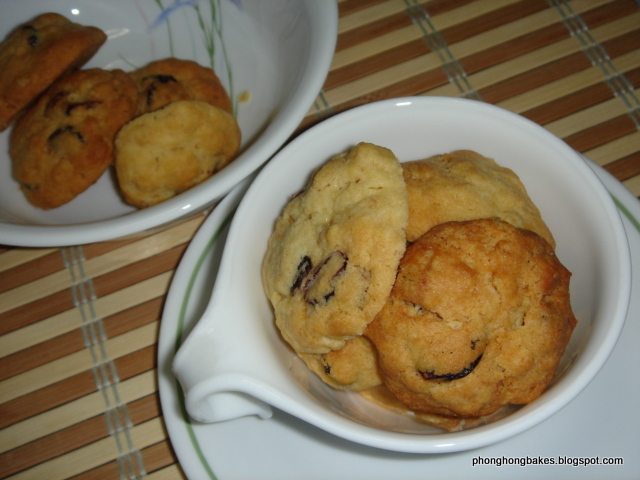