No Need To Cook Lah : Dahmakan Made Me Lazy (Part 1) 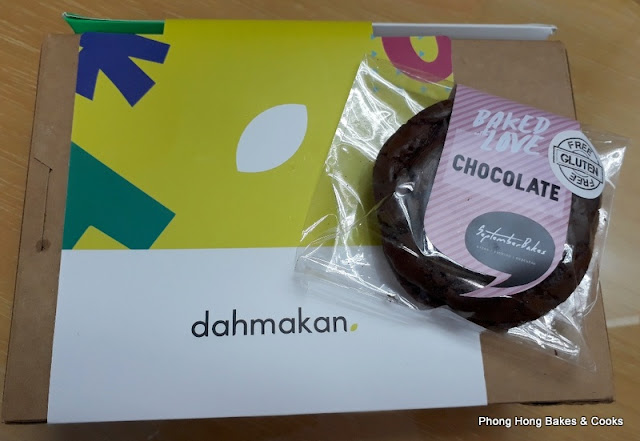 Ever since I tried ordering from food delivery, I am hooked. I mean, there is nothing like having someone cook and deliver the food to you and after you eat, you just throw away the box. Hah!


No more grocery shopping, tearing your hair out when a crucial ingredient for a pre-planned meal prep is unavailable, washing and cutting veggies/meat, slaving over the stove, washing up and all that crap. Right? Right?? wahahahaha!!!

Well. I could get used to it but it is a little costly (depending on which meal you choose) and you may not be completely happy with the meal. If you cook it yourself, you can adjust to your taste, add more veggies if you like etc.

So far I am enjoying the ride, hanging up my wok for a while and chilling out especially during this very busy work period at the office.

Oh, by the way, I decided to sign up for Dahmakan SELECT to enjoy preferential prices for the meals. So let's see what I ate so far.

One thing you will learn is that what you see isn't going to be as pretty when you open the box. 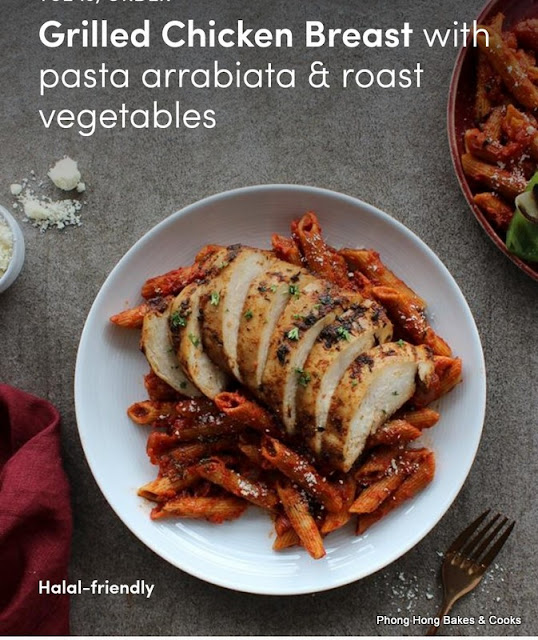 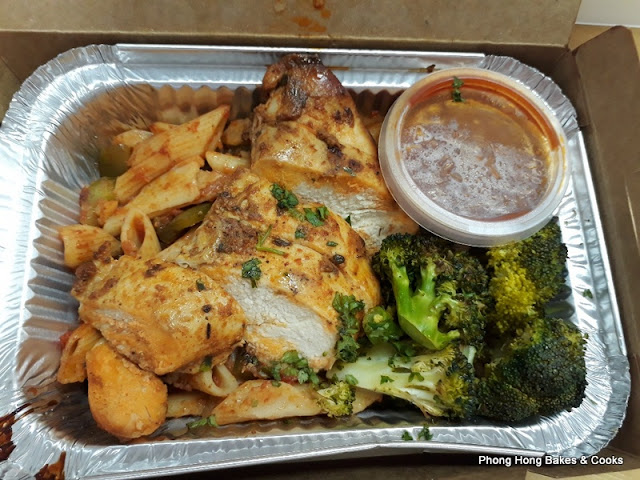 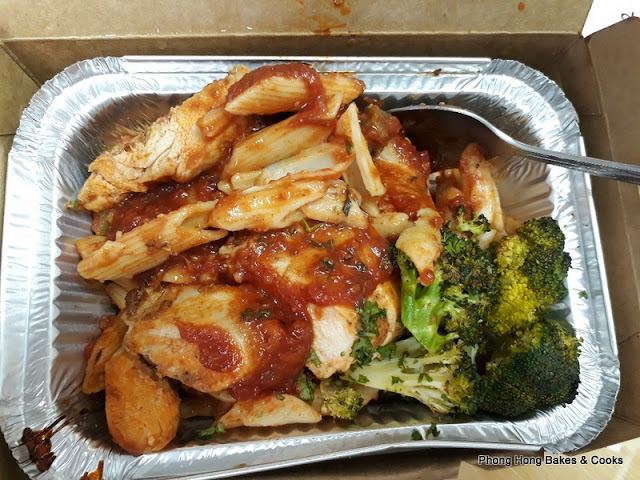 I'll have to say that I loved the Arrabiata sauce though the pasta was a little overcooked for me. The portion of pasta and sauce was a little conservative, a bit more would be great. Overall, this dish would have been perfect for me if it was served with chicken thigh.

Would I order this again ? : No, because I don't like chicken breast. 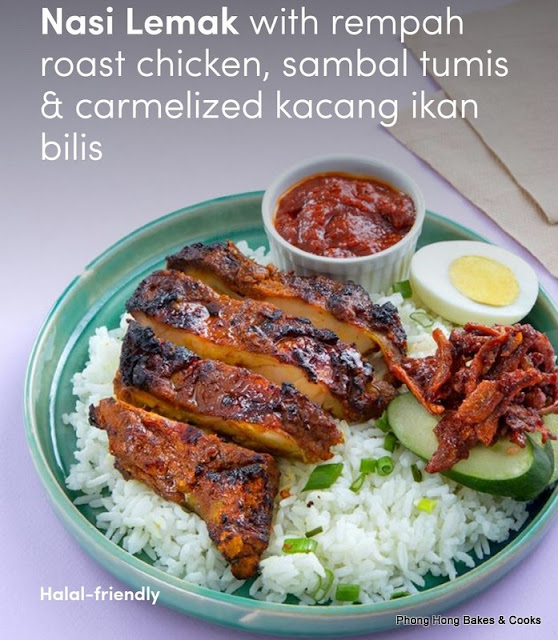 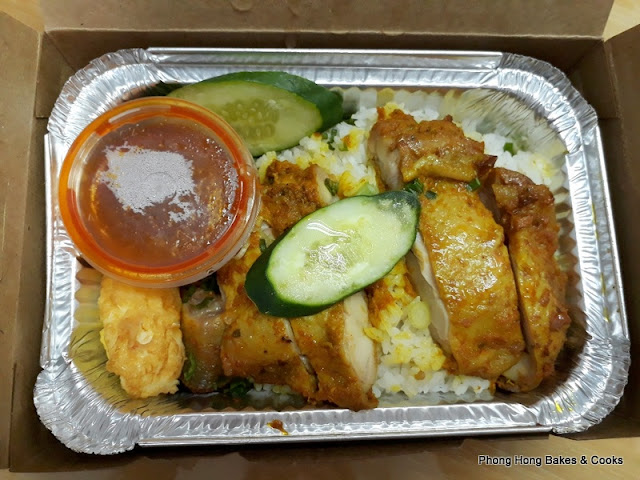 It smelled very nice when I opened the box and what caught my eye was that sad wrinkled thing on the lower left of the box. It turned out to be half of a hard boiled egg that had been fried. I would prefer the hard boiled egg in its natural state. 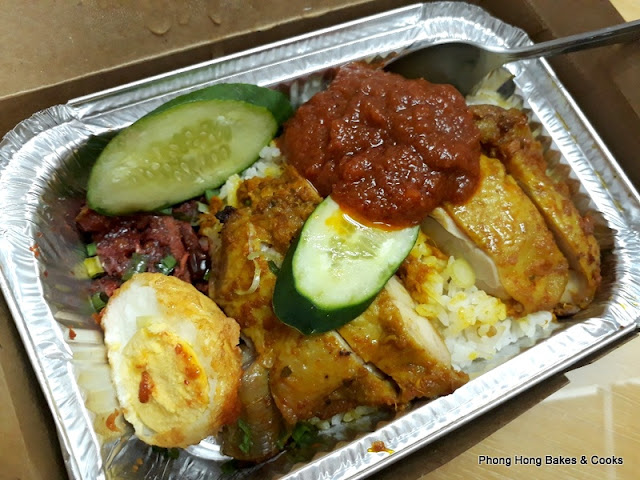 The portion of rice was very generous, it was fragrant but not lemak enough and it was a bit mushy. I have no complaints about the chicken (thigh) but the ikan bilis was a bit strange. The color was weird (sort of purplish pinkish) and taste wise it was not remarkable. The sambal was quite decent and very spicy hot.  I was stuffed after this meal due to the rice.

Would I order this again ? : No, because I have had better nasi lemak. 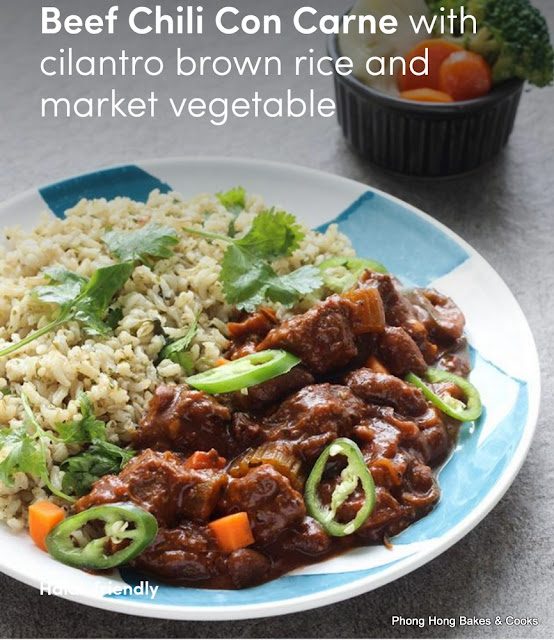 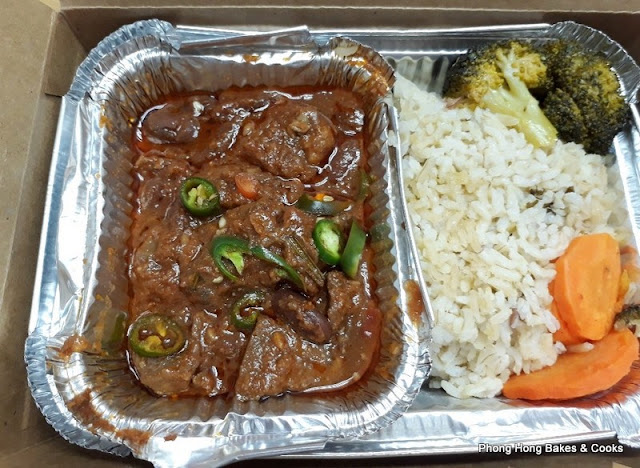 This was my hangry meal. The rider was late and the best part was that even though the app notified me that he had arrived, he was nowhere to be seen and he took such a long time to phone me.

He was actually nearby and I informed him to ride a bit further up (about 200m) and to look for a particular signboard. Then I saw him zoom past without turning his head to look for the landmark.

I had to call him something like 3 or 4 times and finally to end my frustration, I asked him to wait for me at a bank nearby and I walked there to pick up from him. I was really mad and I chided him gently. This guy got a one star rating from me and customer service got an earful (or rather an eyeful when they emailed me). 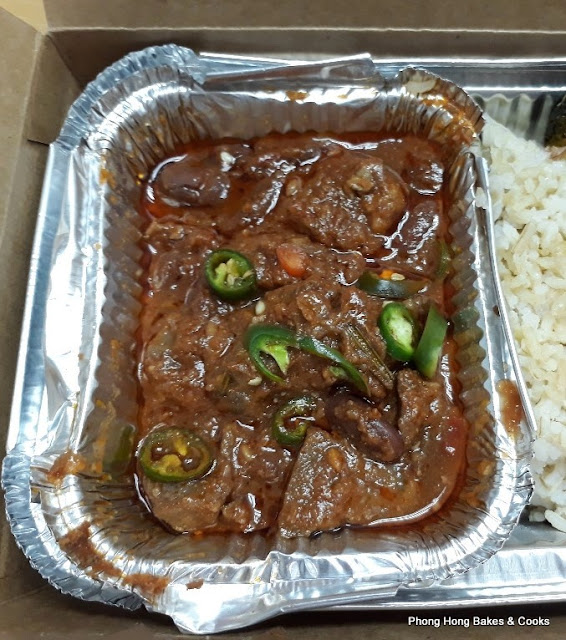 Luckily this meal was delivered warm and it was so delicious that all was forgiven (well, not really). The beef was very tender and the seasoning was just right. The flavors of this beef chili con carne was spot on. A little bit more gravy would have been great because I felt that I needed more for the rice.

Would I order this again ? : YES! A resounding yes! 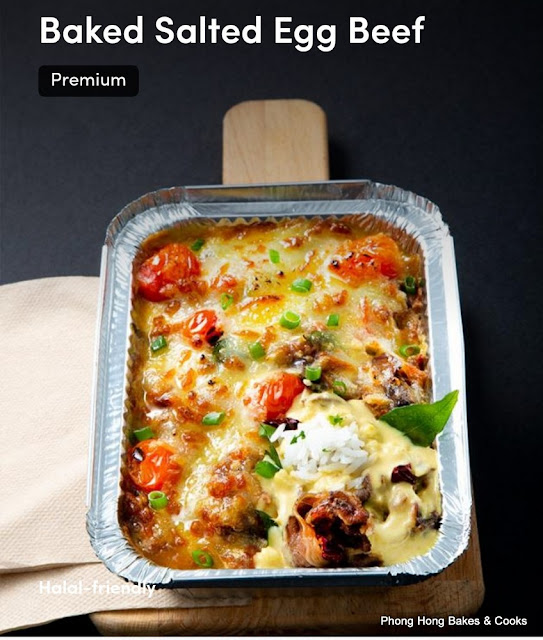 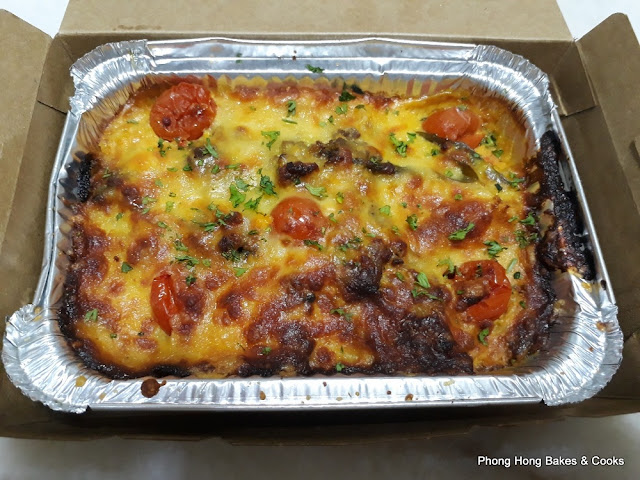 A little bit burnt but that did not affect the taste. I was surprised that I liked it because the cheese was not overpowering. 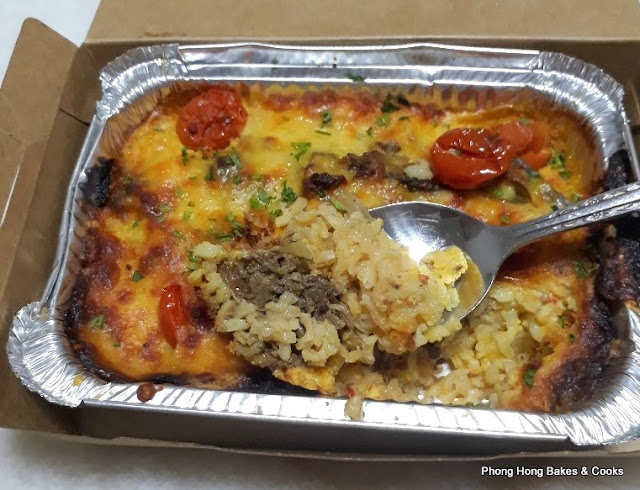 I could taste the salted egg and there were generous slices of beef in the rice. It made for a satisfying and filling meal. 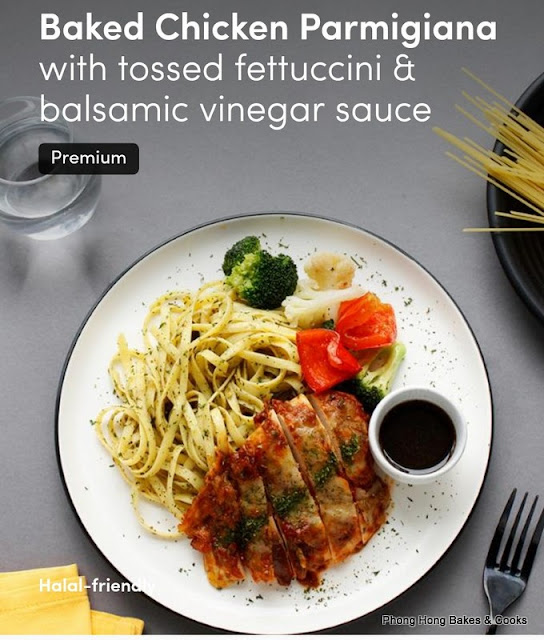 Before I get into the food, let me tell you that if Meal #3 was my hangry meal, then this was my heart attack meal. It was a Sunday evening and the tracking showed that the rider was 1 minute away. So I waited outside while playing with my cat. 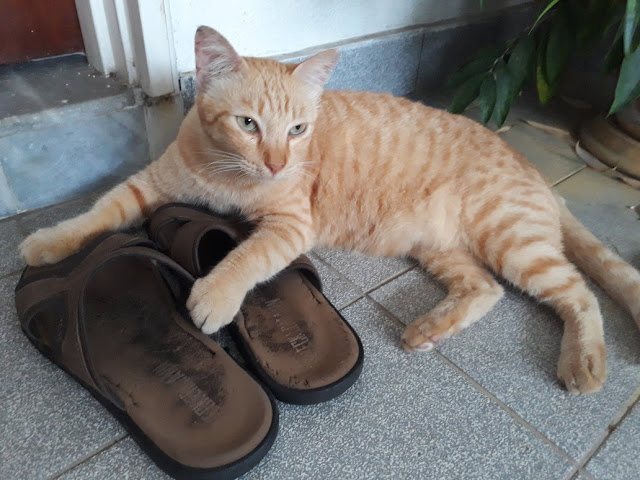 Then my phone beeped. He has arrived. Eh? I don't see him. I did not even hear the sound of a motorcycle nearby. Then another beep.

Straight away I contacted customer service screaming bloody murder (via text lah). Then 5 minutes later the rider showed up. He almost kena murdered.

When I questioned him why was I notified that my meal was delivered when he had not even arrived, he was quite flustered. He tried to explain that it was raining (not in my area anyway) and his phone malfunctioned. I quickly contacted customer service to notify them what happened and the rider got a one star rating from me. So. 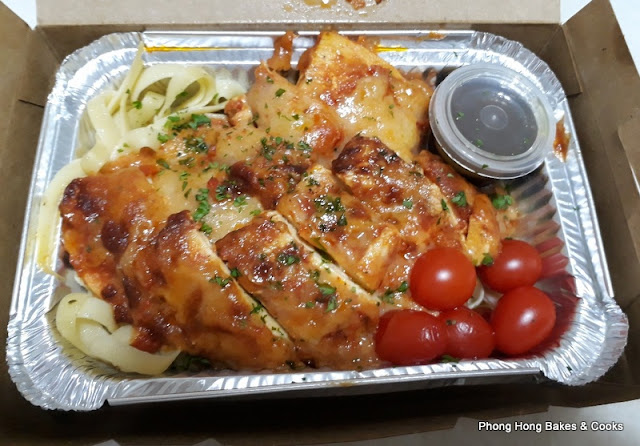 Stress and anger notwithstanding, I was like wah! when I opened the box. The first time that something looked so loaded and more beautiful that the website photo. It smelled pretty good too. 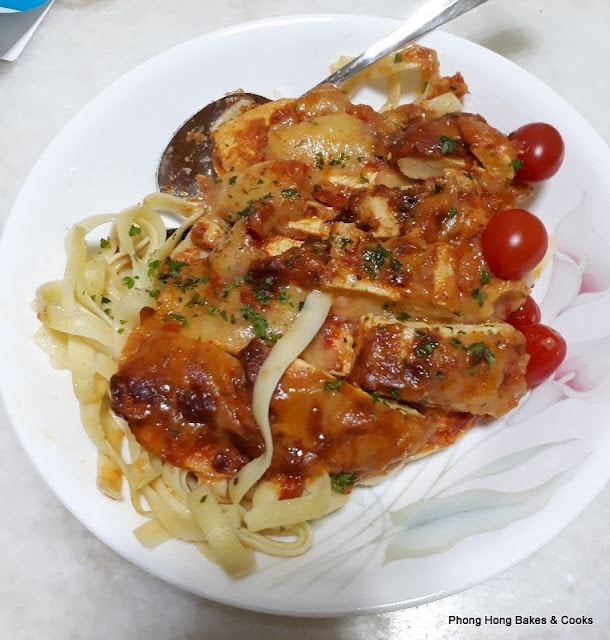 To make it easier to eat in front of the telly (hah..hah...), I transferred the food to a plate. And then because I had a nice avocado in the fridge, it became like this : 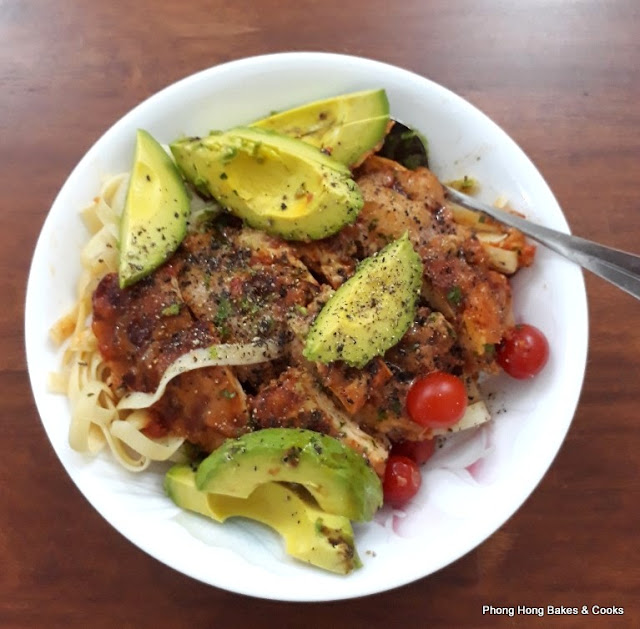 I added loads of freshly cracked black pepper and this turned out to be one of my most satisfying meals. The portion of chicken was huge and though I have a love hate relationship with cheese (especially parmesan cheese), I found this chicken parmagiana to be totally delicious (even though it was chicken breast).

Would I order this again : YES!