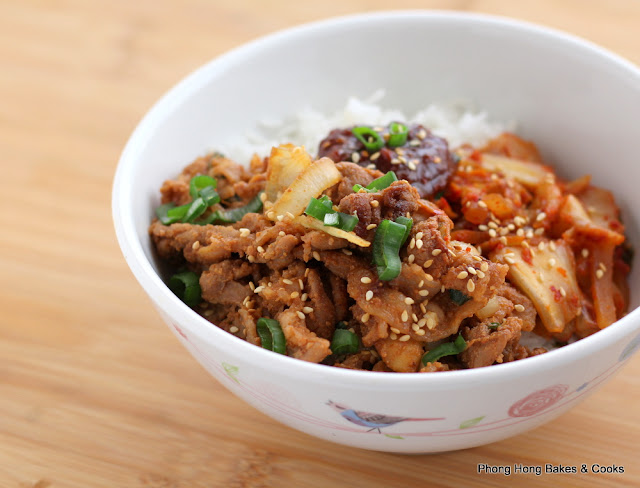 It has been quite some time since I went for a Korean BBQ. My first Korean BBQ experience was more than 10 years ago at Nak Won Korean Restaurant at Jalan Ampang together with my auntie and my brother.


Since then, we have found Korean restaurants much closer to us like Qing He Gu and Daejanggum. Obviously if you want to eat BBQ, you need to bring at least one more person with you. My Korean BBQ companion is my brother and I am thinking we should go for a BBQ sometime soon. 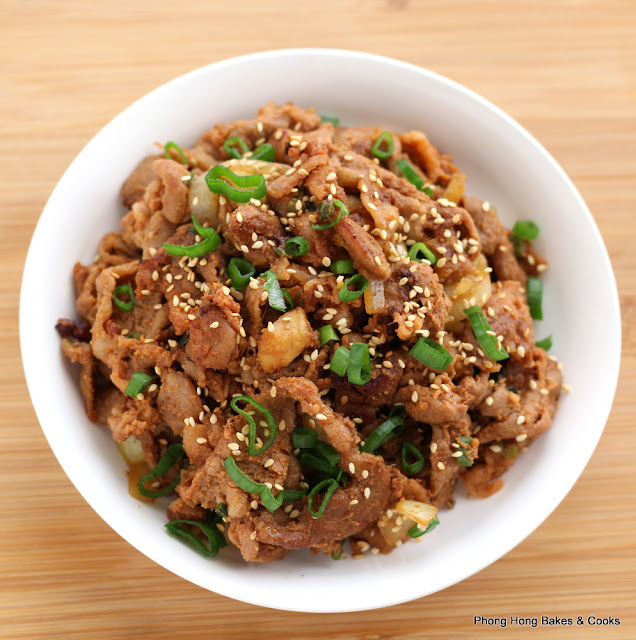 But you can have something close to a Korean BBQ at home. In fact you don't even need any special BBQ equipment and can use your frying pan to pan fry the marinated meat.

The first time I tried the recipe, I used pre-sliced pork belly. 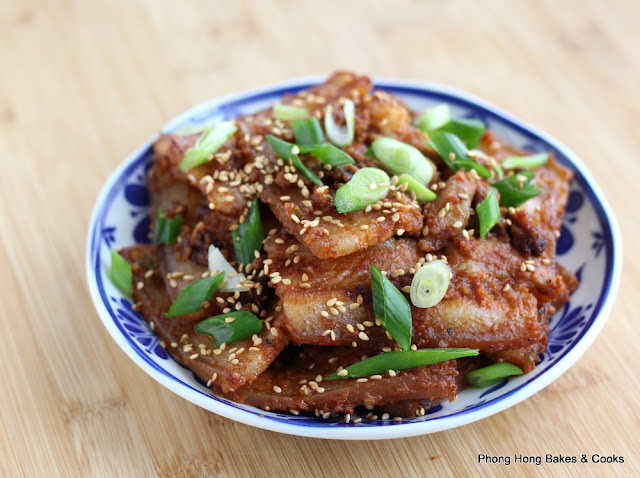 It turned out very well in terms of the taste - very close to the one at the restaurant. I used my cast iron grill pan but I found that the meat was not tender enough, maybe the pork slices were not thin enough and required longer cooking. 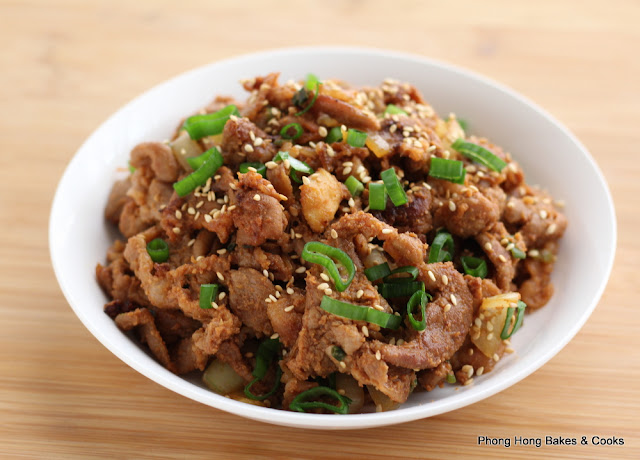 Subsequently, I bought those thinly pre-sliced pork belly, the ones that are used for steam boat. The meat was so thin and I was afraid it was not suitable. But I was wrong.

Because the meat was thin, it cooked really fast and the result was so much better than the first attempt. I fried the marinated meat in my non-stick pan over medium high heat. 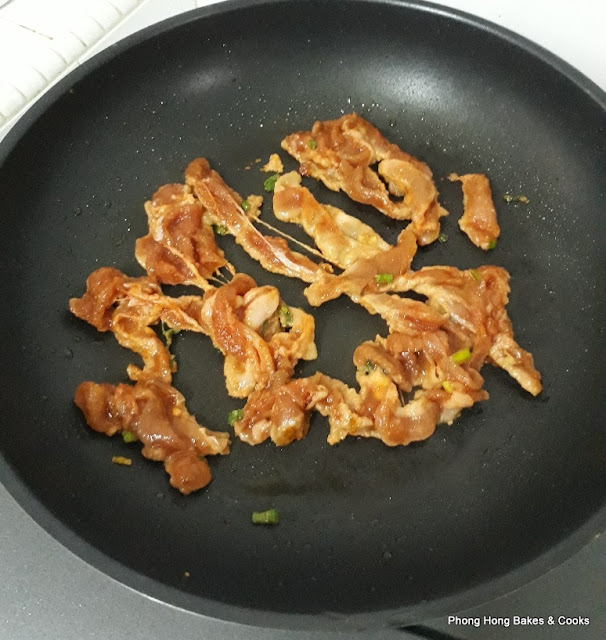 I fried the meat in small batches to get better results. Cook for a few minutes before flipping over to cook until the meat is no longer pink and is slightly browned. 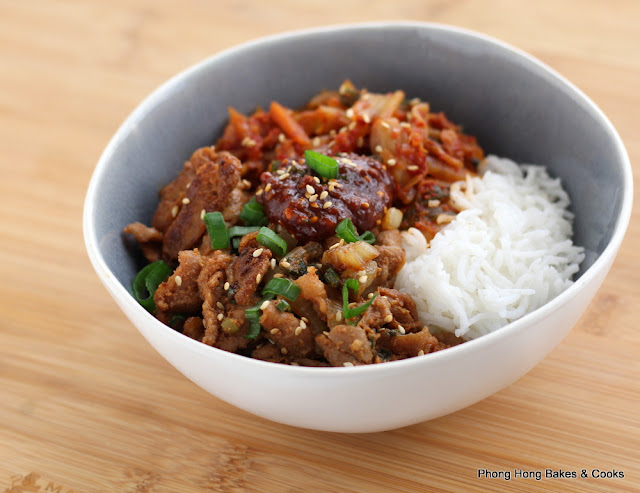 Instead of eating the meat wrapped in lettuce, I made rice bowls topped with stir fried kimchi and ssamjang. It was so good, a nice change from eating out hee...hee... 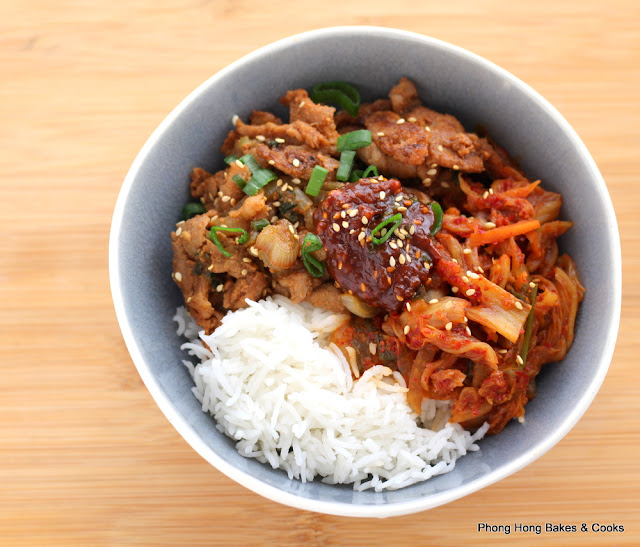 Method :
1. Blend the pear, onion, garlic and ginger.
2. Pour the blended ingredients into a mixing bowl and add spring onion, light soya sauce, brown sugar, sesame oil and gojuchang. Mix to combine.
3. Add pork slices and mix to coat.
4. Keep in the fridge to marinate for at least 30 minutes or overnight.
5. To cook, heat up frying pan over medium heat and pan fry the meat in small batches until cooked and browned. 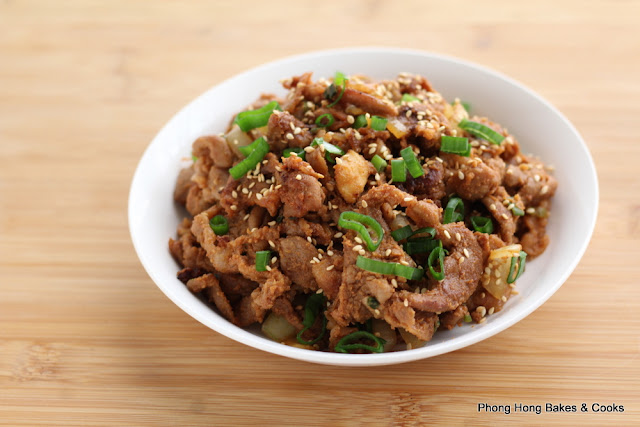