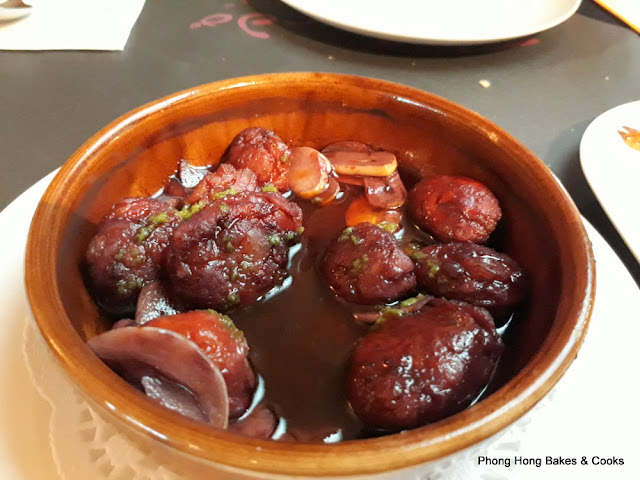 When was the last time I was at El Cerdo? Ah, it was back in in 2016 and my previous pigout there with my brother was in 2015. All in all, I have been to El Cerdo six times, including this latest visit. 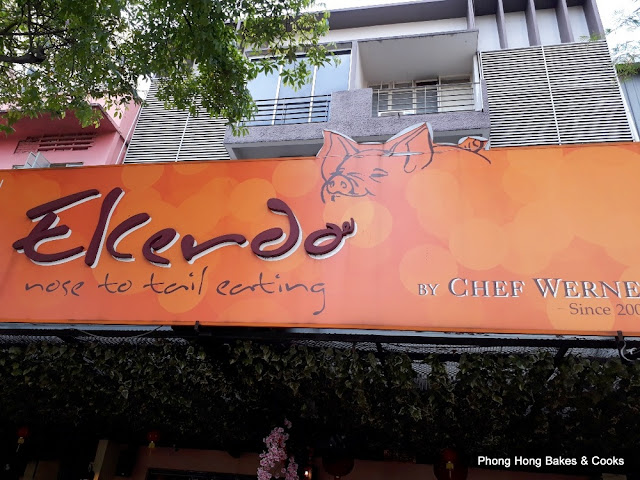 This time I made reservations and we got ourselves a better seating. It looks like EL Cerdo was all decked out for Chinese New Year. 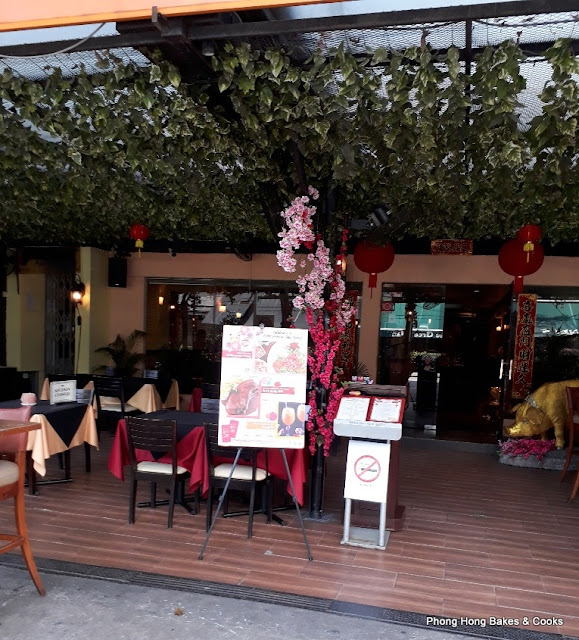 A golden pig greeted us at the entrance. Oinks! 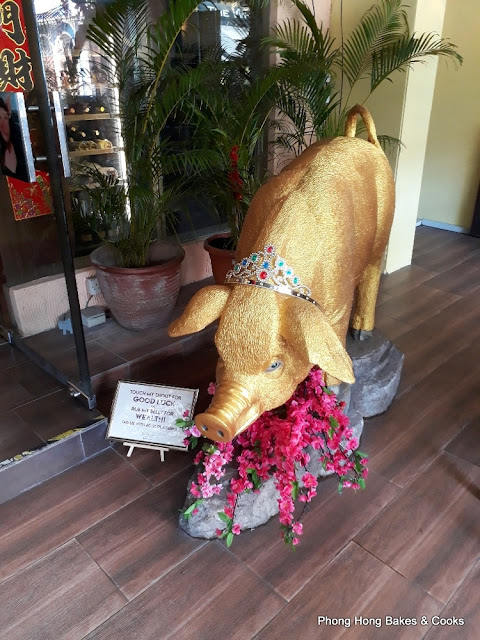 After checking the menu, we decided to try the tapas and another thing we wanted was the paella. For drinks, it was a Caffe Latte (RM17.00) for my brother ......... 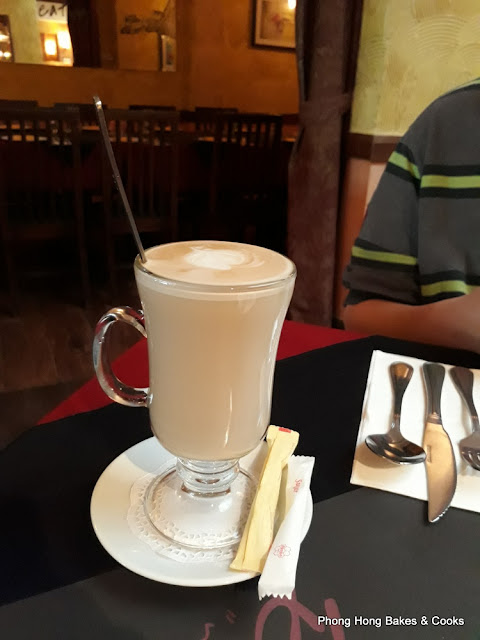 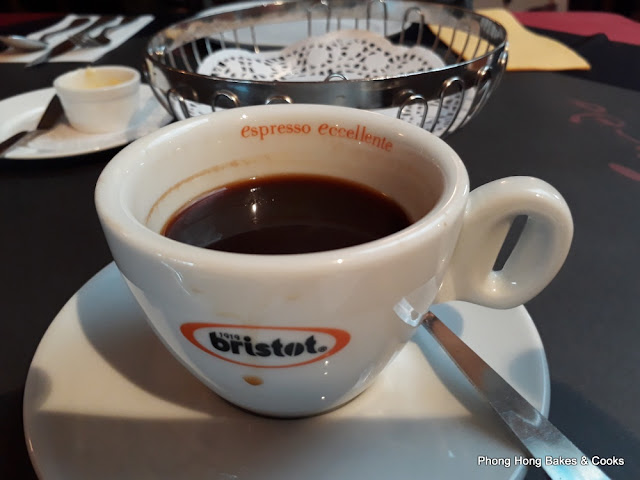 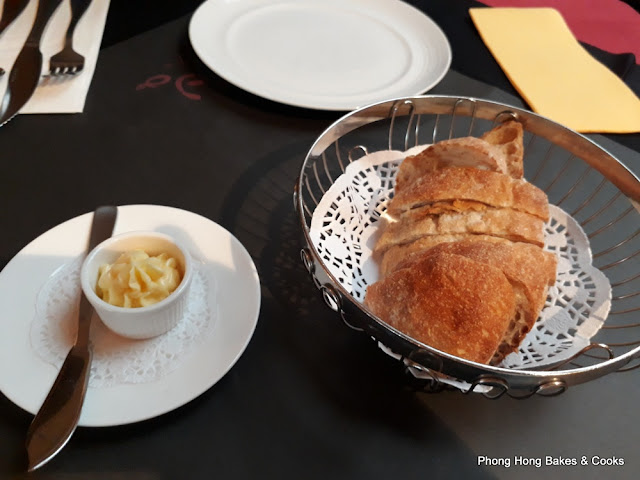 Now for the tapas. 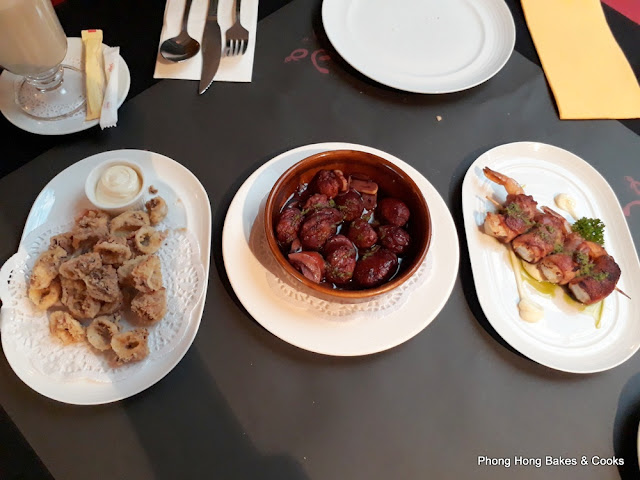 We have been watching too many food channels and we have watched people going in and out of cafes in Spain for tapas. We wanted some without having to go to Spain. 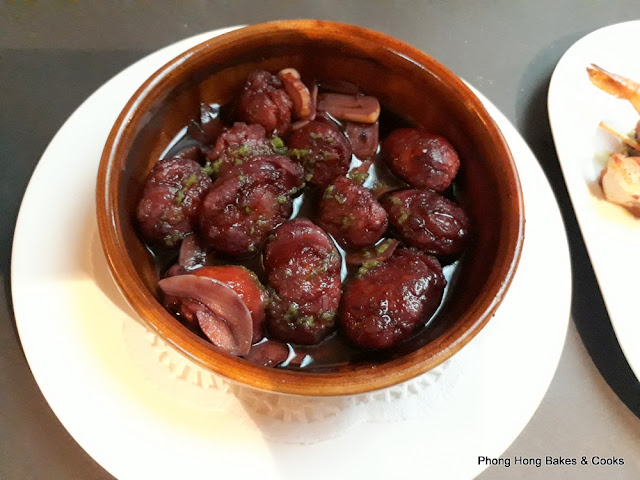 Chorizo Al Vino (RM30.00, semi-cured chorizo braised in garlic and red wine). Very robust flavors, the chorizo was chewy and overall this was a tad too salty for us. 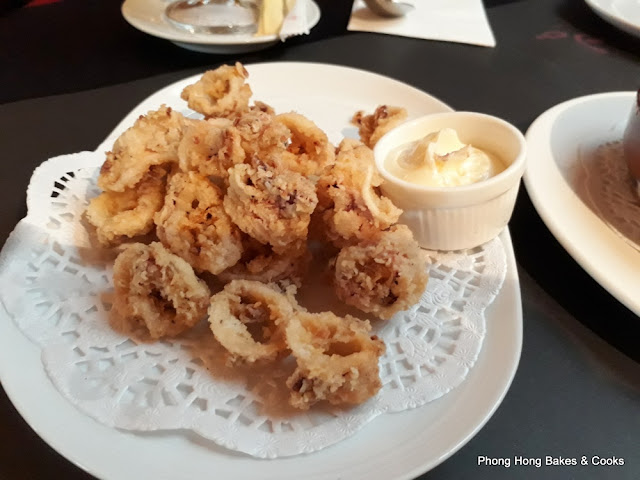 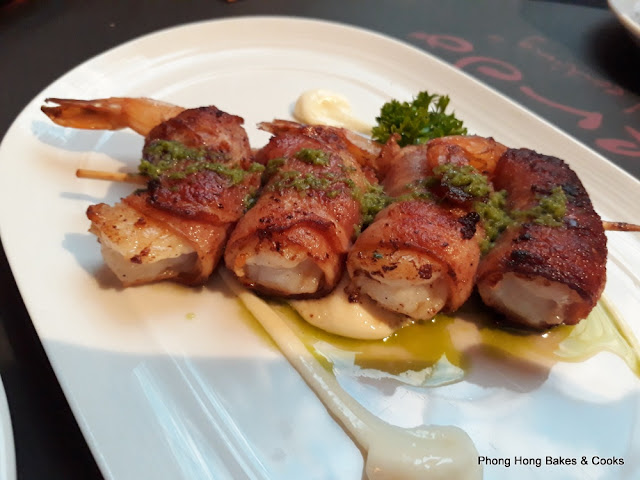 Gambas Con Beacon (RM33.00, tiger prawns wrapped with bacon and aioli). The prawns were cooked just right and hey, anything with bacon gets our thumbs up. This was our favorite.

One dish were looking forwards to was the paella. We have had good experiences with the paella on our previous visits but this time something did not seem right. 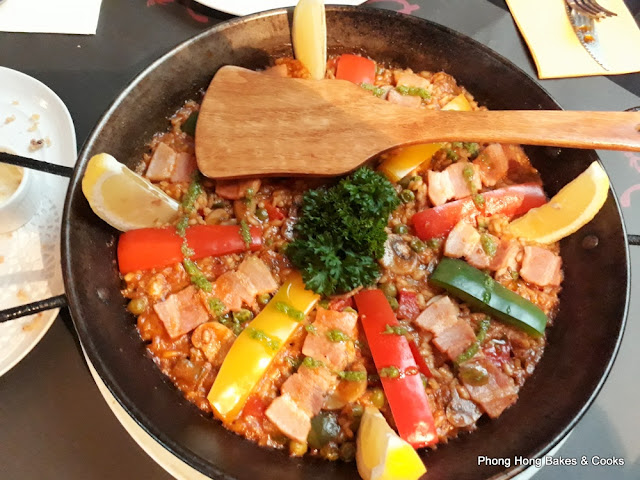 This is the Mountain Paella (RM112.00, bacon, chicken slices and fresh assorted mushrooms). The look of this paella (the appearance of the rice) reminded me of Sean's post of his not-so-stellar paella experience in Barcelona. 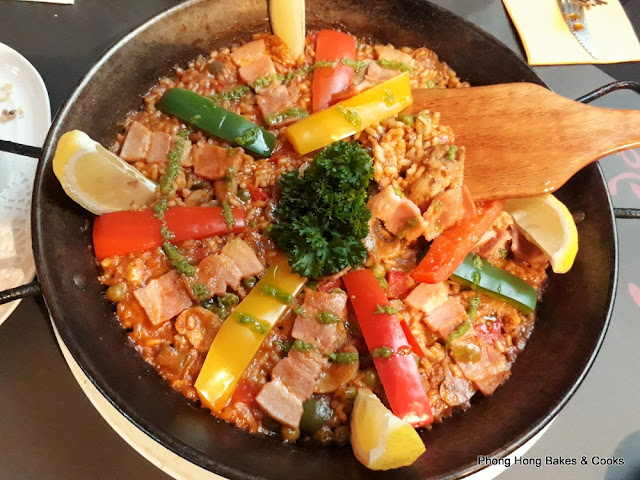 Why am I being so fussy? Look. The paella was wet. 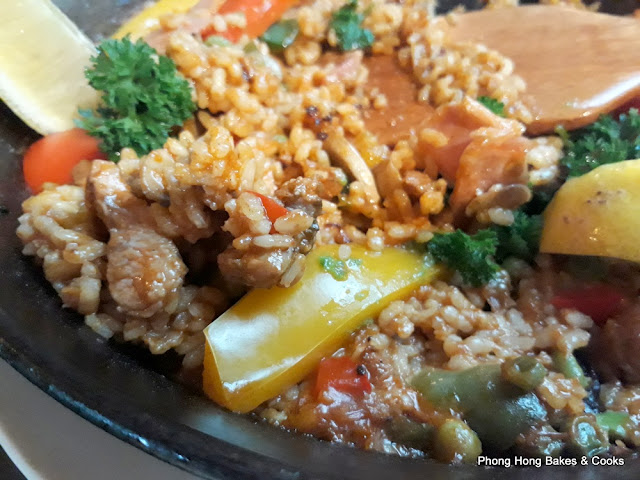 The rice was under cooked and my brother described the rice as "crunchy". As you know, under cooked rice has a bite to it.  I don't normally kick up a fuss at a restaurant unless if I feel strongly about something. So I called for assistance and a young server approached. I informed her that the paella was too wet.

The young lady responded indignantly that "paella is like that". She was rather condescending when speaking to us. Darling, this is not my first time eating paella at El Cerdo. I remarked that it was not wet like this the previous times we had it. I also pointed out that the rice was under cooked.

She gave us an irritated look and reluctantly took the paella away. If I am going to pay RM112.00 for this, it better be good. So we waited. 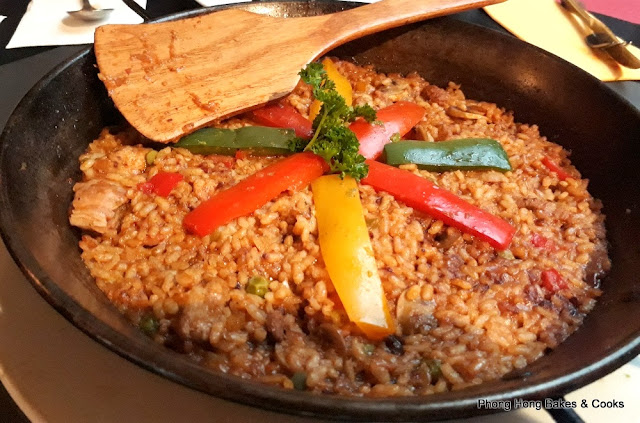 It came back (sans lemon wedges), slightly better but still too soggy for my liking. At least the rice was cooked. I took only one serving. My brother, not being a fussy pot like me and not wanting to waste my hard earned money, finished the paella. 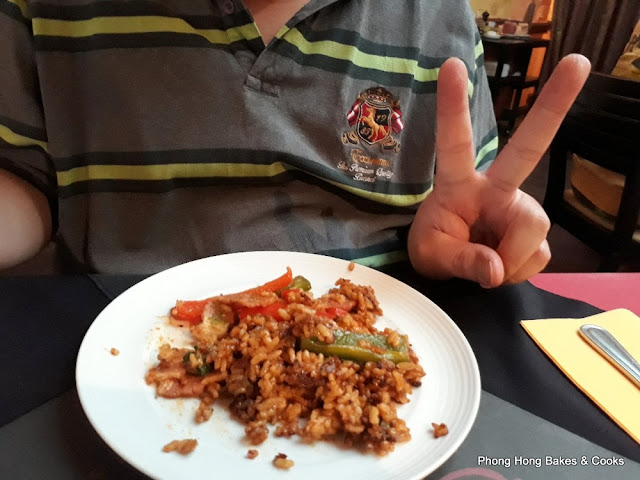 When the second server came to check on us, I told him that the paella was still too wet for me. I was again told that "paella is like that". There is really no point arguing. As far as I am concerned, the rice should be moist but not starchy and  soggy like risotto.

Some of you may tell me that there are wet versions in certain regions in Spain, yes, I am aware and if El Cerdo is going down the road of the wet version, then I had better make a note to inform the server of my preference for dry in my not-so-soon future visit.

Let me show you what the paella looked like on my previous visits.


Back then we were told that their Spanish customers like it cooked until the bottom is crusty, which suggests that the rice ought to be drier.


I was quite annoyed being told twice that the soggy paella "is supposed to be like that" and I thought the paella that day was subpar. If you read my post from 2015, you would know how much we loved the paella.

What made up for the less than stellar lunch was the Werner's Special (RM32.00, fresh strawberry in mango sauce with chocolate mousse and wild raspberry sorbet). 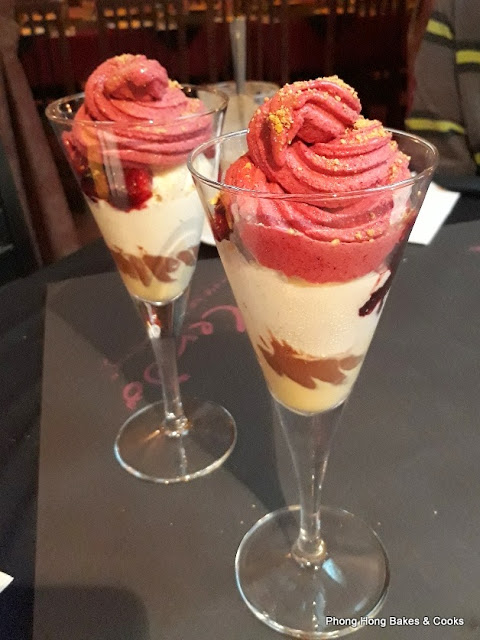 There's nothing like a fabulous dessert to cure a broken heart. The server suggested splitting one dessert into halves and my brother told her "the last time our dessert was split, we were not happy about it" hah... hah... 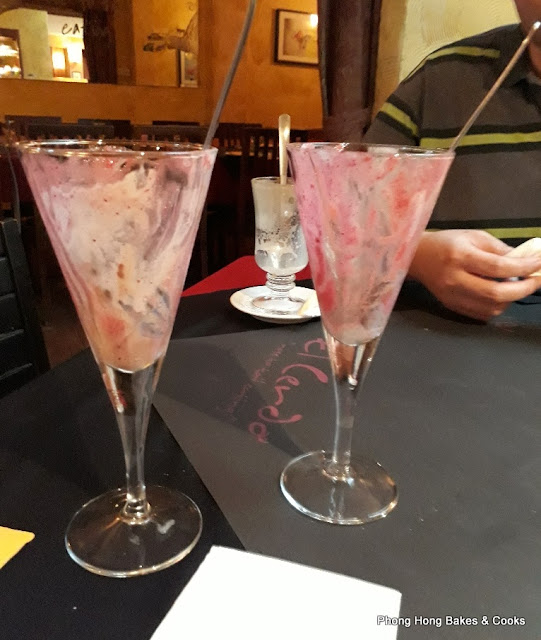 If we could lick the glasses clean, we would. Best item of the day. 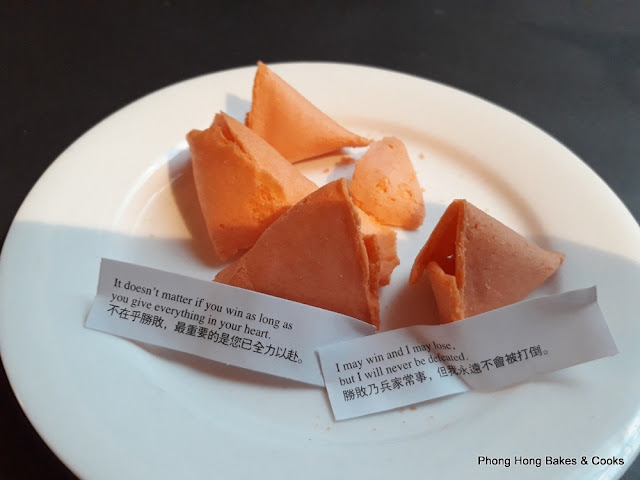 Oh, we were given fortune cookies at the end of of meal. My brother's is on the left and mine of the right.

Total damage for the day RM312.70. We were deeply disappointed with the paella as it did not meet with the standards that we have come to expect of El Cerdo.

I will now leave you with a video on how to cook paella. Perhaps that's what I should do.