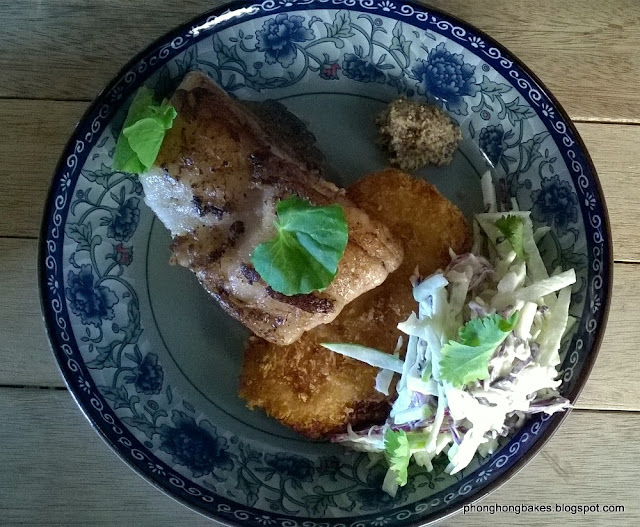 X-Rated. What comes to mind? A movie. Banned by the Malaysian Censorship Board. But no. This X-Rated has nothing to do with that. In fact there is nothing obscene about it at all.

But, if the sight of quivering flesh fats evokes lusty fantasies of the culinary sort, then I suppose a slab of pork belly can be very obscene. Your cardiologist might agree.

This time my brother, another pork belly enthusiast, played partner in crime when I paid Ampersand a visit one early evening (this happened more than a week ago).

When you have two big eaters at a table, you cannot order just one pork belly, OK? On my previous visit with my partner, I had no idea if a slab of 350g pork belly was too much for one.

Suffice to say, I was capable of polishing off The Rebellion all by myself (including the Citrus Salad), with room for dessert after that. Hah!

My mission for the evening - to taste the other two bellies.

The American, presented to the table in a gorgeous plate. A slab of belly, nicely browned on the outside, served with a croquette and a side of apple salad.

As I cut into the belly, I was delighted that the texture was firm. Look, what a beauty. It was a tad salty for me but I still enjoyed the meat eaten with the wholegrain mustard. 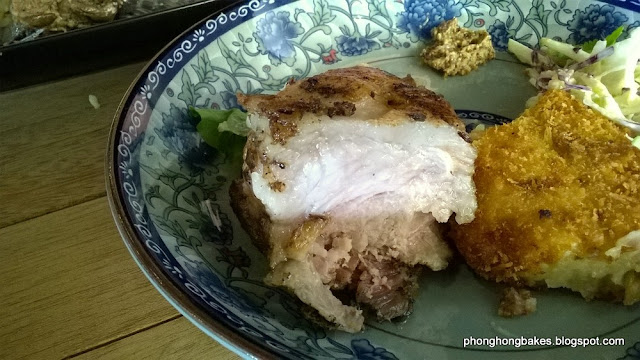 The croquette was lovely (of a good size too), crusty on the outside and very soft and creamy on the inside. I also loved the apple salad.

Now, the X-Rated. It's no surprise why it's X-rated. This dark beauty jiggled sexily playfully as I attempted to move the plate. Whoohoo!! 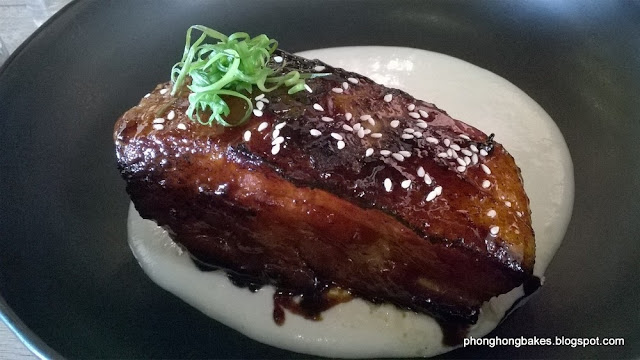 I liked the texture of this one even better. Very firm when sliced. I loved the coating of char siew sauce and the meat paired wonderfully with the tofu puree and peanut butter mustard.

It was incredibly unique, so tasty that my brother and I found ourselves taking scoop after scoop of the the puree directly into our mouths. Yum! 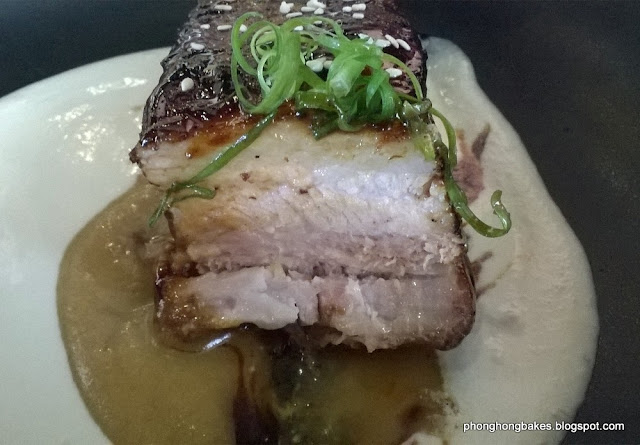 We reached a consensus that this is the better of the two bellies. But seriously, I love all three. The Rebellion warrants a revisit now that the bellies are of a firmer texture.

Oh, we must not forget to take our greens. We made an order for the Caeser Salad. 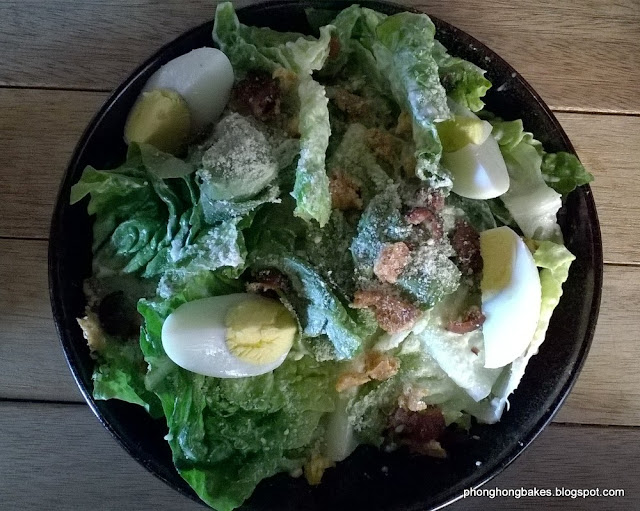 The salad was generously sprinkled with Parmesan cheese, something that I almost always avoid like the plague. But in a Caeser Salad, I can tolerate it. 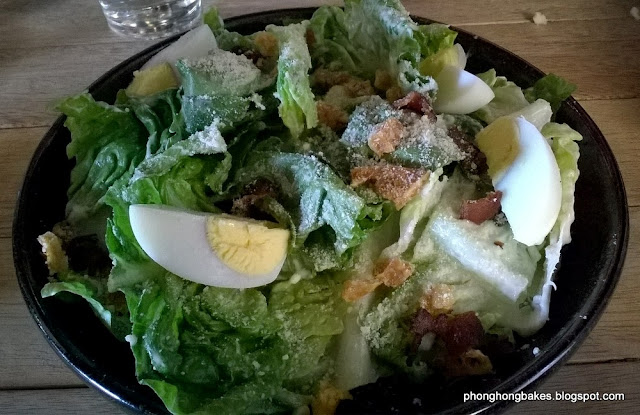 There were lots of crunchies in there in the form of bacon and pork rind. But I think the salad was slightly under dressed and it could have done with bit more dressing.

Dinner would not be complete without something sweet to close the evening. I wanted the B.E.N.J.I. (peanut butter chocolate cake/molten caramel sauce/vanilla ice cream/bacon) but apparently this dessert is still a work-in-progress. So we settled for the Greeny Green. 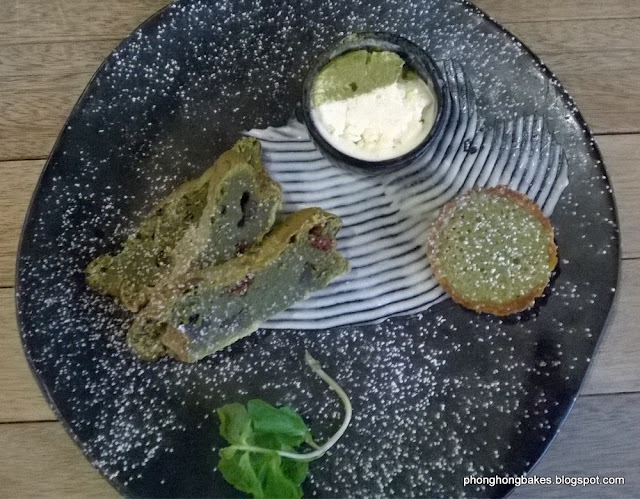 Honestly, I am not a fan of green tea based desserts. But I am willing to try one at least once. Besides, this particular dessert sounded interesting, comprising three components (tart, cake and ice cream). 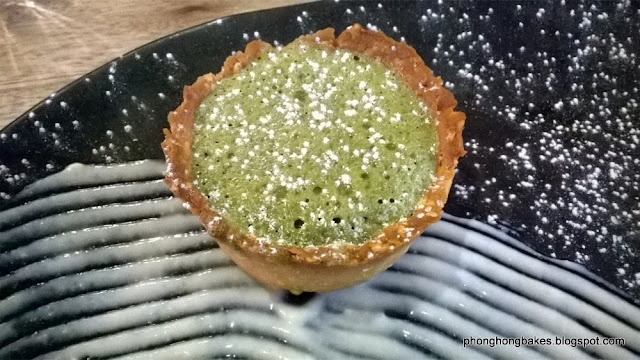 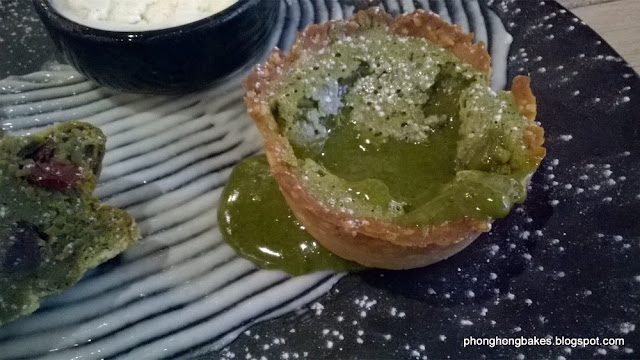 We had a taste. It was actually quite good. There was none of that greenish taste associated with green tea. It was pleasantly sweet and we loved the tart shell even though it was a bit hard (but crunchy).

Then the Green Tea Fudge Cake. That was a different story. My brother was first to take a bite. "How is it?" I asked. From the look on his face hah..hah.. it was that "bo ho chiak" look. 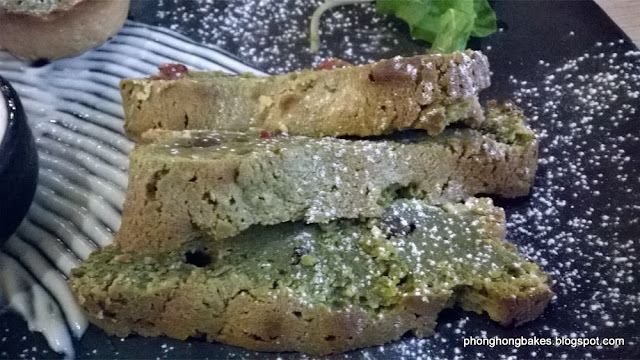 He said it tasted strange. I took a bite and yes, it did not sit too well with me either. But that was the initial impression. As we took bite after bite, the taste mellowed and became most pleasant.

It had a hint of something that tasted like split peas which reminded us of a Terengganu nonya kueh. At some point it even reminded me of kuih bakar.

Yes, it was nice, especially eaten with the ice cream. I was so engrossed that I totally missed the honey tofu cream until I saw it on Sean's blog.

While enjoying the dessert, we were graced with the presence of The Magician. Just in case you didn't know, the Culinary Rebels are made up of four individuals - G-Man, Rayman, The Butcher and The Magician. We had a pleasant chat with the creator of the X-Rated (and all the desserts).

We left Ampersand very satisfied. As we walked to the car, it occurred to me that we should have asked The Magician to work his magic and make the one million calories we consumed disappear :D 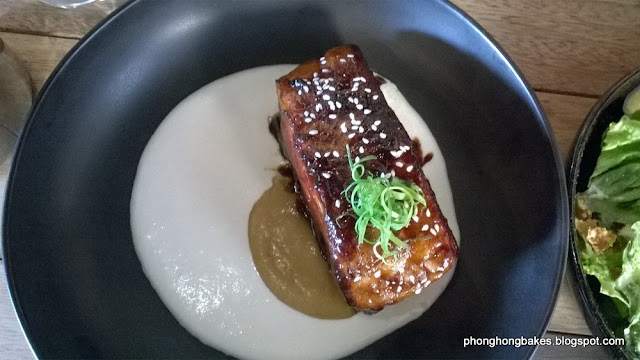