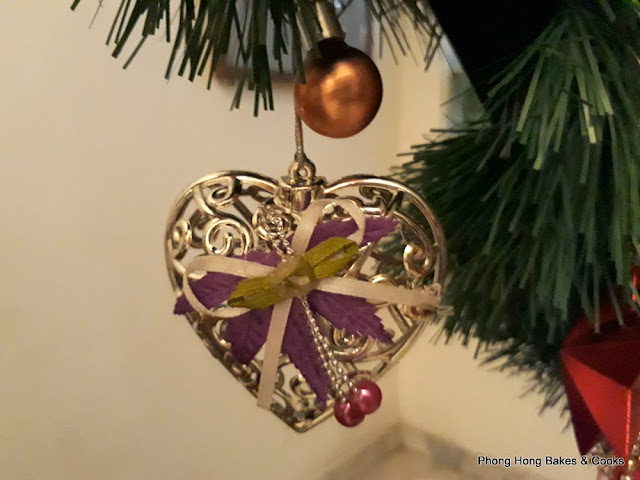 I bet you people go to parties all the time. Birthday party, Christmas party, New Year Eve party and whatever it is that can be partied. Me? Party is not in my vocabulary. Because I have a strict mother. 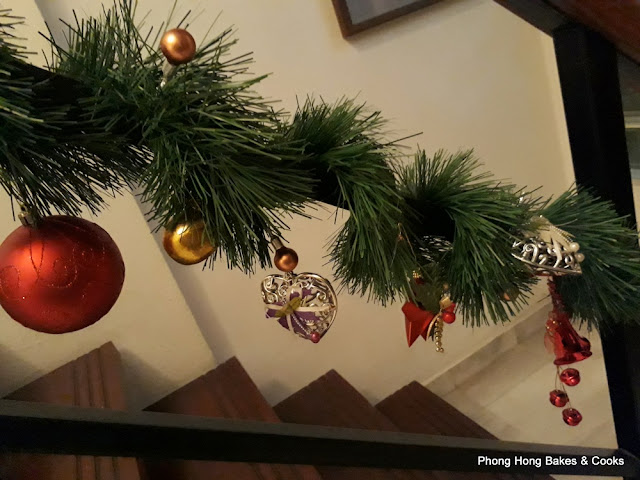 When I was in Assunta circa 1980-something, one of my classmates threw a party (Shakey's Pizza was on the menu) and I was invited. I am not a sociable person but the prospect of eating pizza was too good to pass up. But when I asked for permission, it was a resounding NO. Bah! No pizza for me. 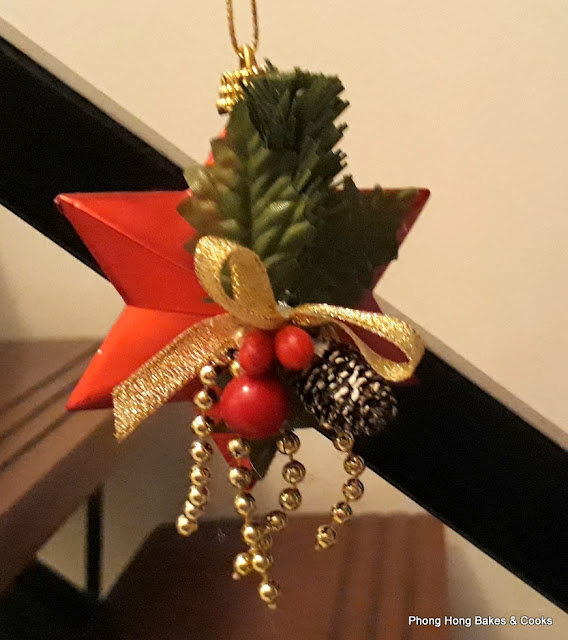 All my life (except for one birthday party when I was in primary school), I never attended any parties. Is that sad or what? No. Not sad at all because as I said, I am not a sociable person.

So. My partner's sister wanted to hold a Christmas eve dinner at her home and we were invited. She said she was going to roast two chickens. Great.

Three weeks before the dinner, I asked my partner to check with her what else she would be serving so that I could contribute a dish.

That's when he found out that she would be buying the roasted chickens instead of roasting them herself. And as expected, he expounded his theory on her about how supermarkets use near expired/expired chickens to make roasted chicken.

Guess who was commissioned to roast the chickens? Not that I minded since I enjoy cooking but I was quite anxious about cooking for my partner's family members. For my own family, I can chill. Wham bang kapow! Whatever I cook, they say nice heh..heh...heh... But for the other camp, hmmm...dunno what to expect. 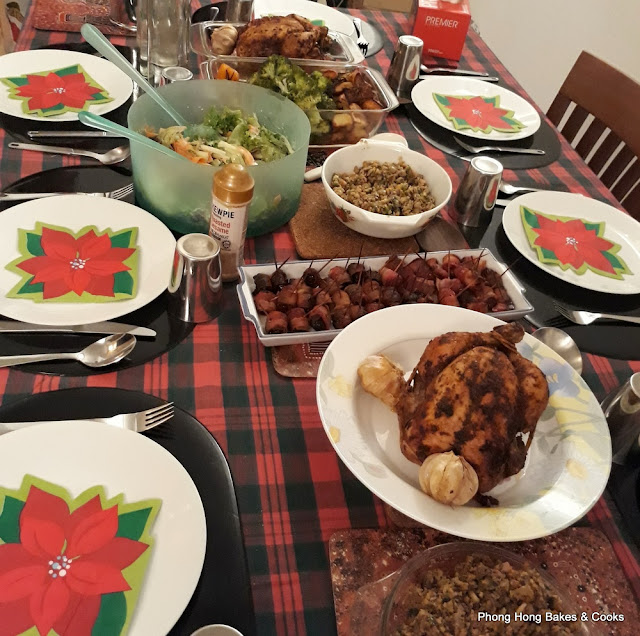 So this is the dinner table. You see my chickens? Nice or not? hee..hee..hee... 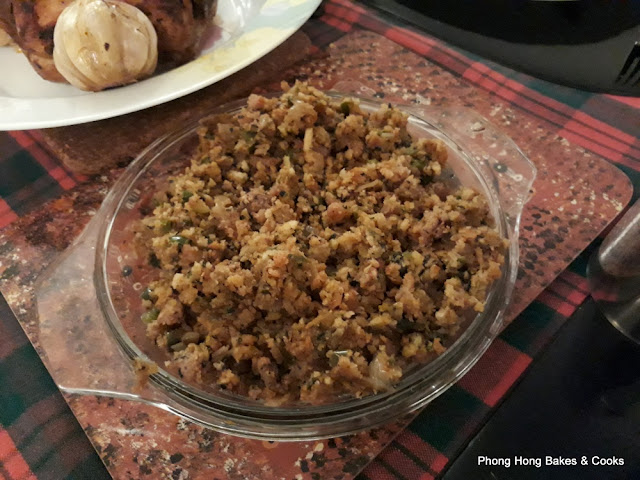 The hostess made stuffing which was really tasty. 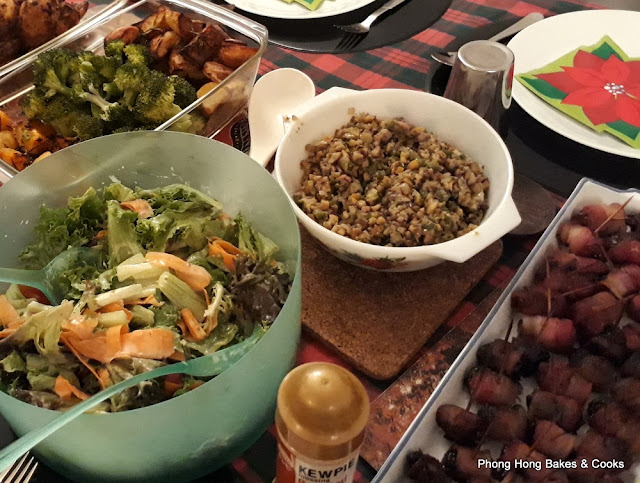 It looks like she is also a fan of Kewpie Roasted Sesame dressing. Those bacon things on the right are Devils on Horseback which I never thought was nice because, I mean, prunes with bacon?

Surprisingly, they were very good. She made half with prunes and half with dates. Under normal circumstances, I would have sapu half the platter. But I had only two. 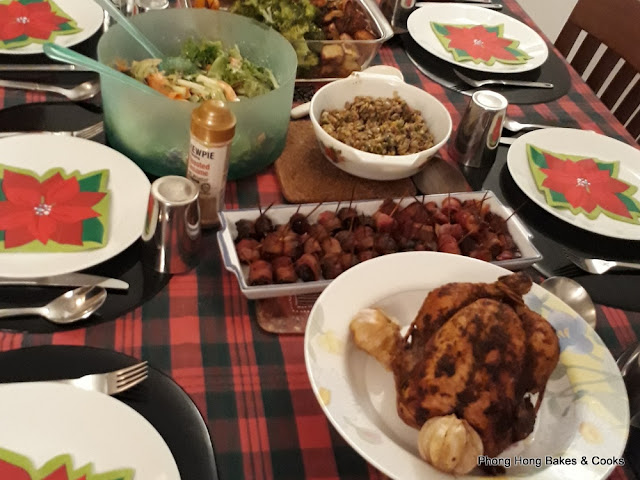 My partner's sister also made Minced Pies which were very tasty. Again, something I thought I would not like. To me pies should have meat (except apple pie) but I was surprised that I enjoyed the sweet spiced minced pie filing.

Unfortunately, I forgot to snap pics of those and my roasted potatoes and chicken legs which were all in the kitchen.

I was asked what I used for the roasted chicken and how I roasted it. I take it as a good sign. And yes, they did say it was nice :)  Not stark raving delicious, but all the same, nice. That will do I guess. 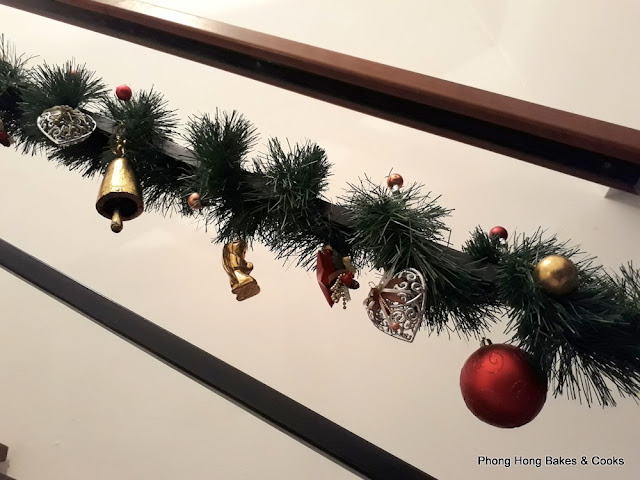