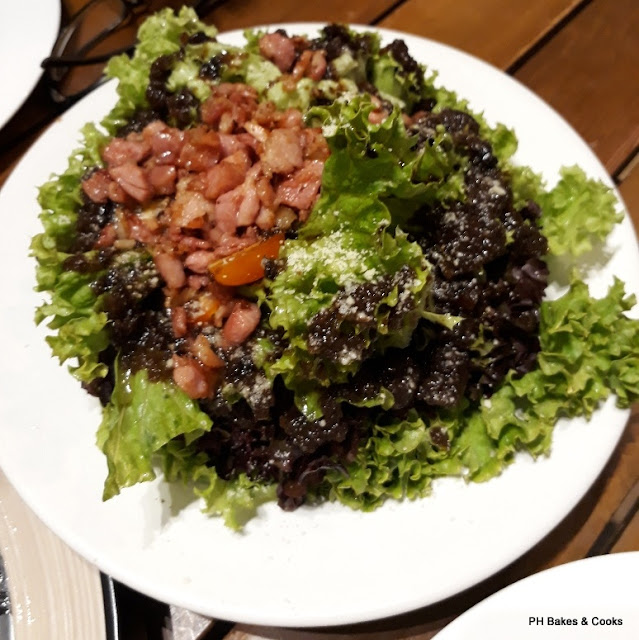 Last weekend I finally got to go where I wanted to go for a long time. A place which my partner would most likely not be too keen to visit.
But we had company and that was the venue proposed and accepted! Besides, the food at The Butcher's Table is meant for sharing as these come in big portions. 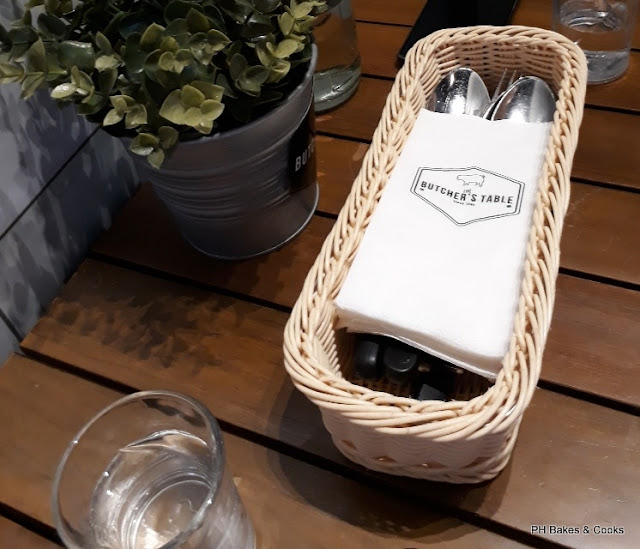 We were slightly late because my partner relied on his "instincts" and we ended up at the wrong side of SS2 hah..hah...  So he had to use Waze to guide us to the right location.
Sometimes my partner thinks he is more clever than Waze. When Waze says "in 200 meters, turn right", he will say "mana tiok???" (how can that be right??) and then he turns left. Then Waze has to recalibrate to lead us back to the right path. Pening aku.
Anyway, we got there to a full house (I made reservations) and our guests had already arrived. 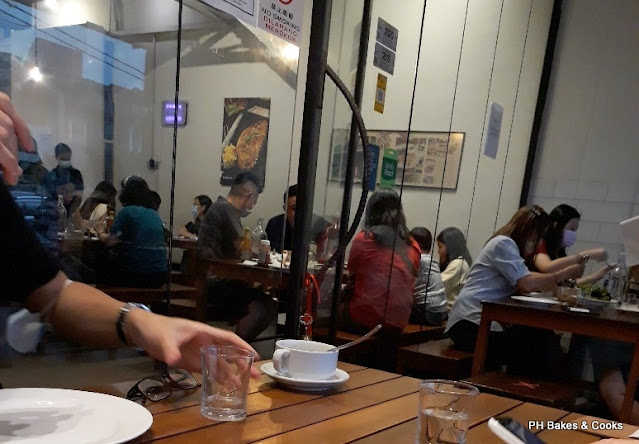 We took a look at the menu. 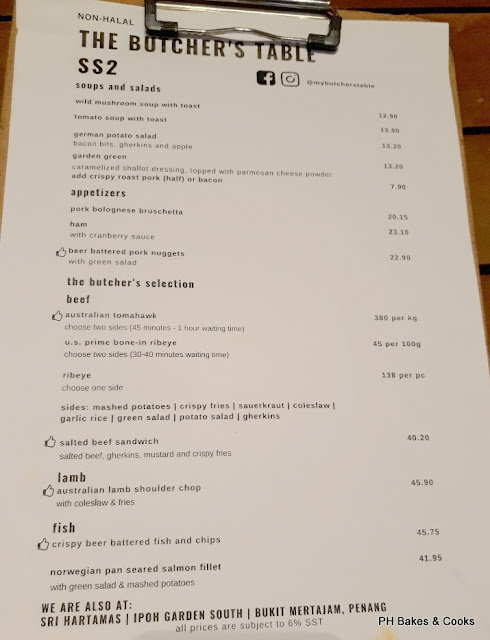 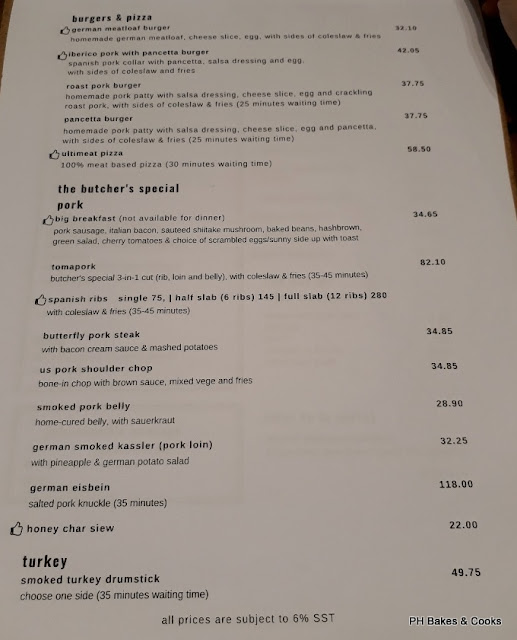 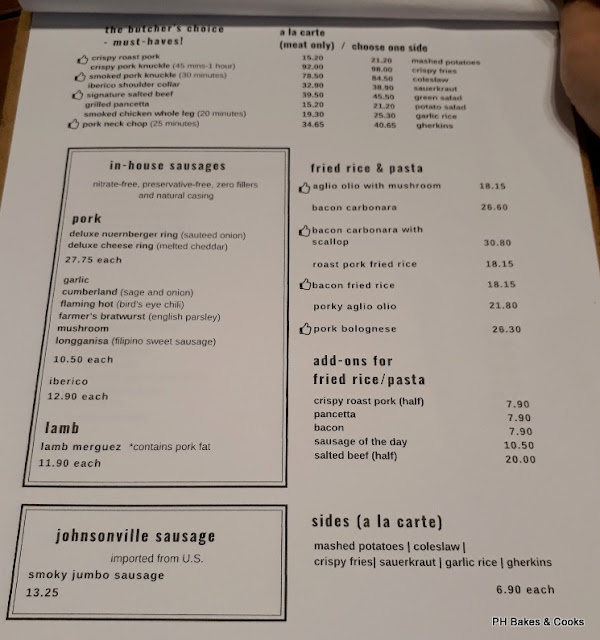 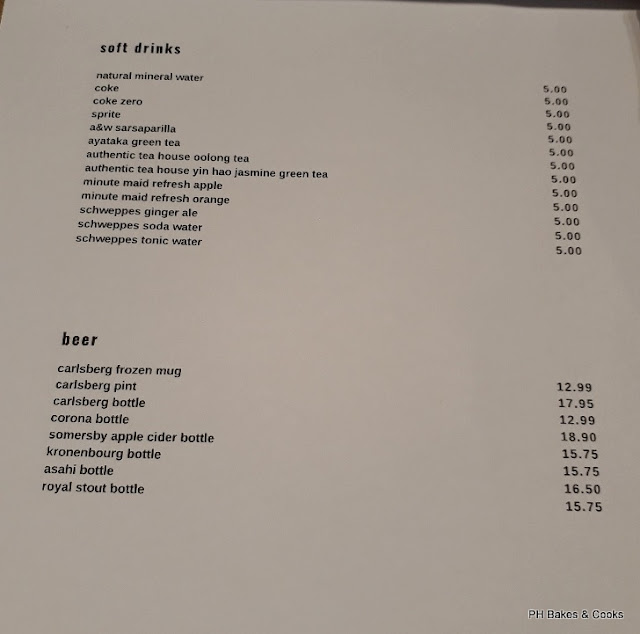 And of course beverages and the yam seng-yam seng stuff. 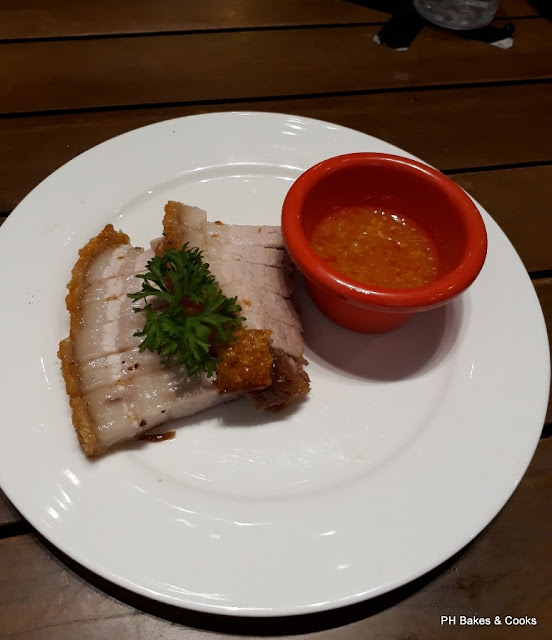 Our guests placed orders while we were lost in SS2. This Crispy Roast Pork looks like your regular siew yoke but tastes much different though the chili dip (which was a tad too salty) is pretty much like the one at any chicken rice shop. 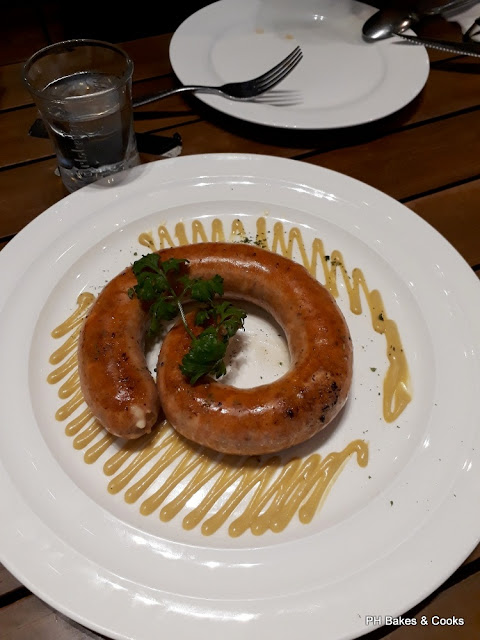 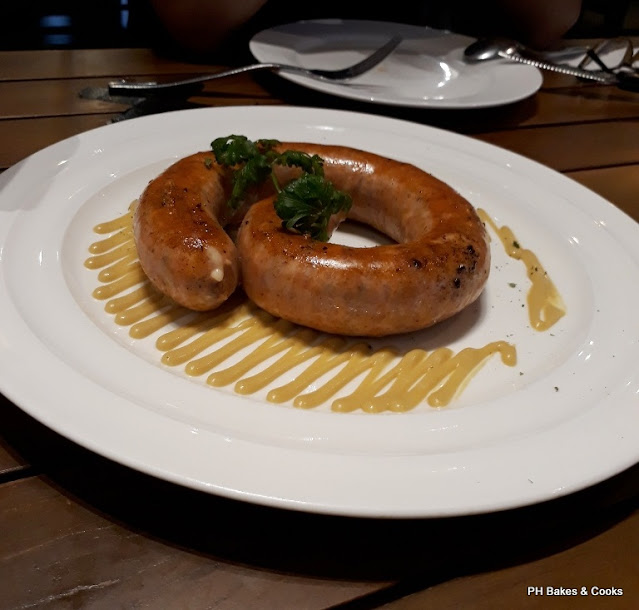 It was served with squiggles of mustard and although filled with cheese, I could hardly detect anything cheesy (yay!). 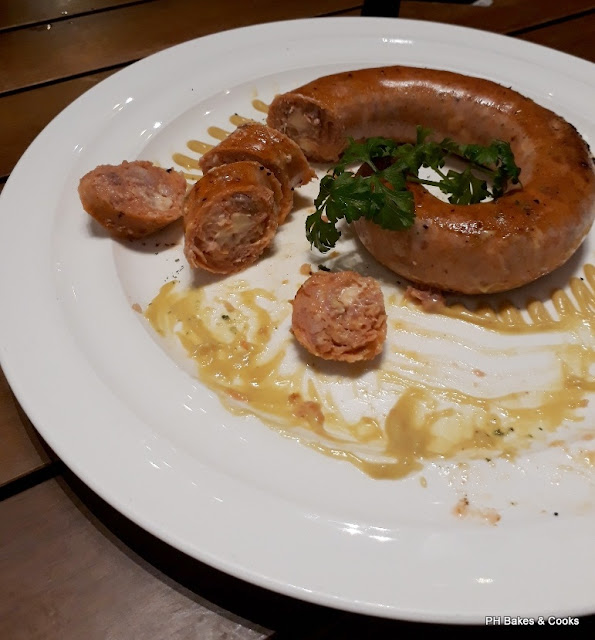 The taste is very reminiscent of the pork sausages that my dad used to buy whenever he had meetings in KL. 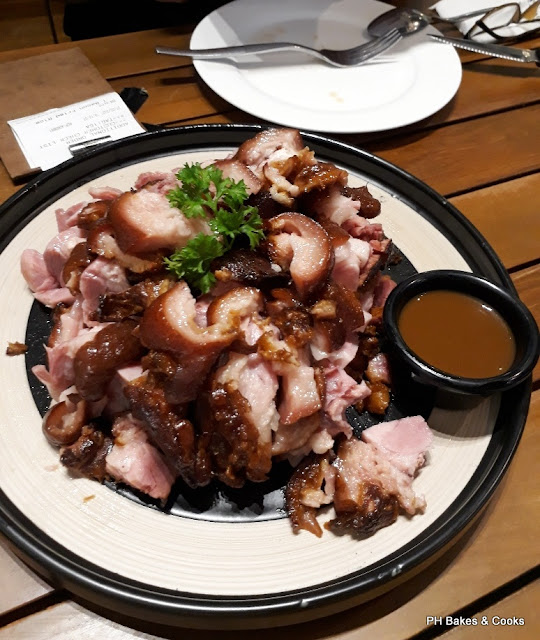 The Smoked Pork Knuckle was my favorite for the evening, smoky, tender and juicy. My favorite part was the skin :)
The brown sauce complemented the meat very well though (again) I found this dish (and the sauce) a little salty to my taste. 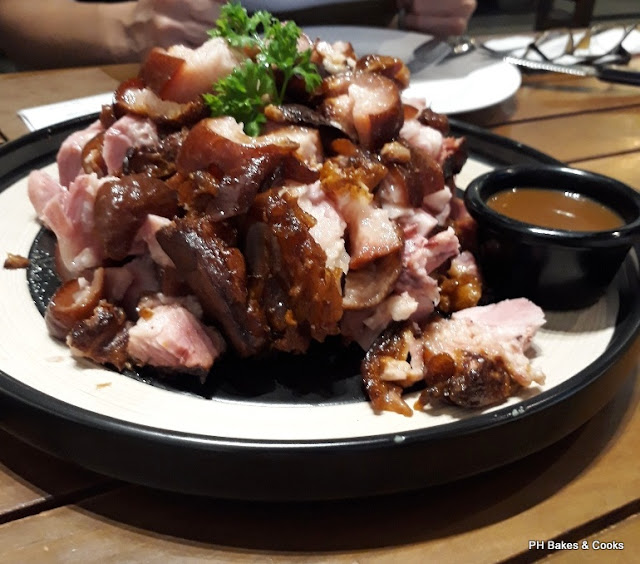 These were the initial 3 orders and then 2 more were added. 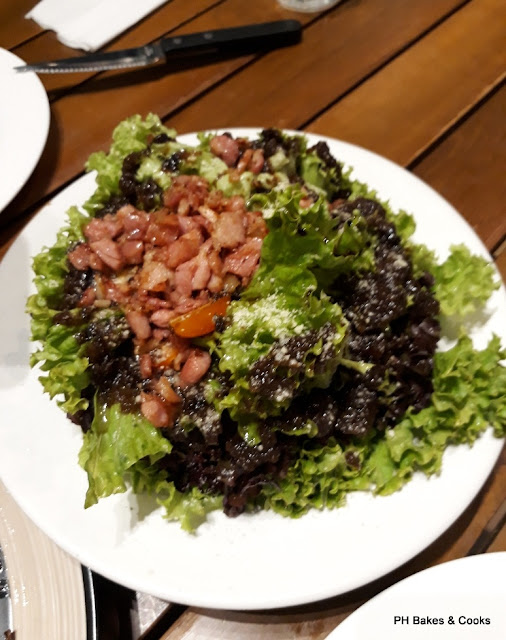 A member of our party felt guilty after sampling the meaty pleasures and decided to add some greens to make our meal more, how shall we say, wholesome? hee..hee.. Even then look at the amount of bacon topping on the Green Salad. 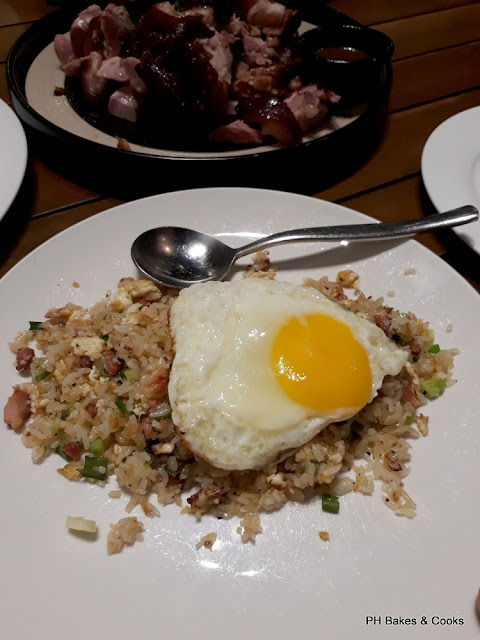 Guess for whom this is for? Yup, my partner had to have his rice. I found this Bacon Fried Rice a little too oily and (again) salty. 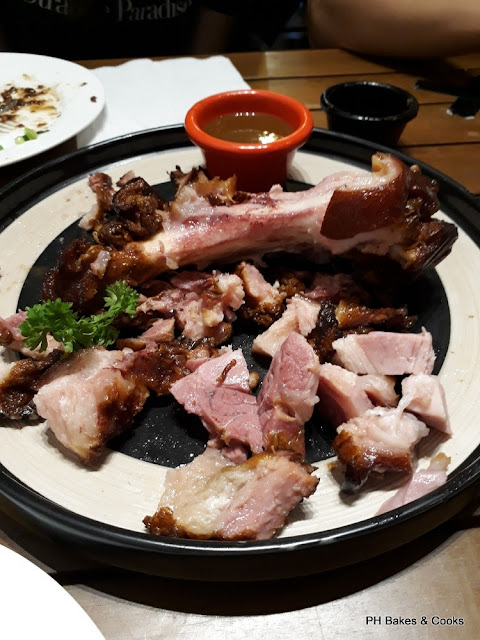 By this time, the magnificent smoke pork knuckle was devoured to expose a bone, which would have been nice to take home to boil soup. Hah! But shy lah.... 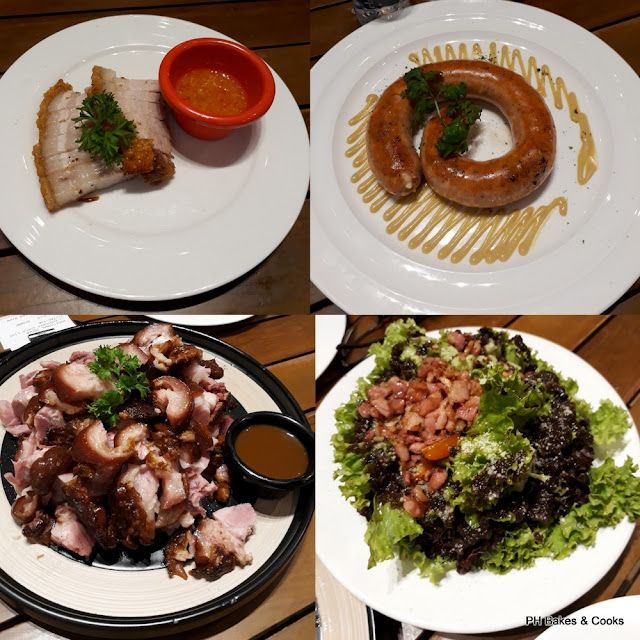 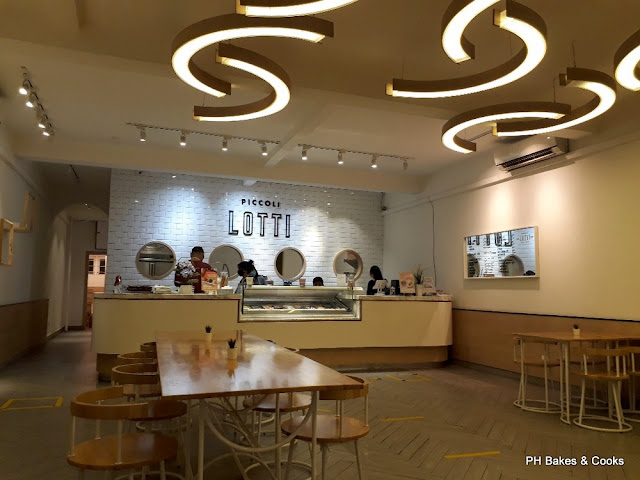 Piccoli Lotti at Damansara Kim. We have passed by many times before but never stepped inside. 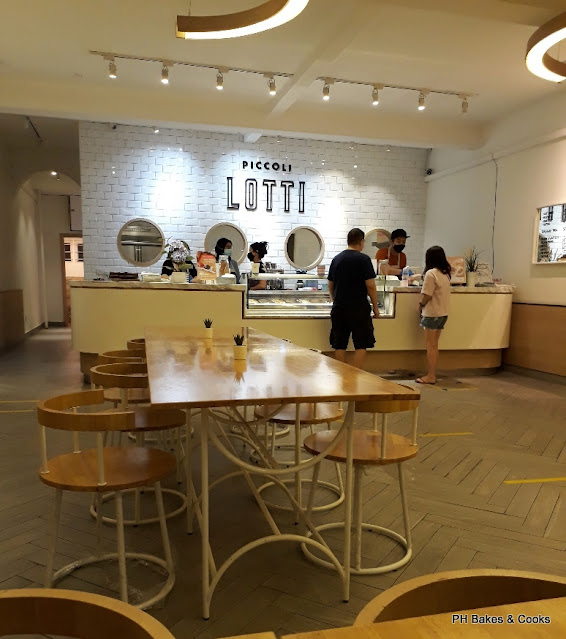 It was quite empty when we arrived but the placed soon filled up. 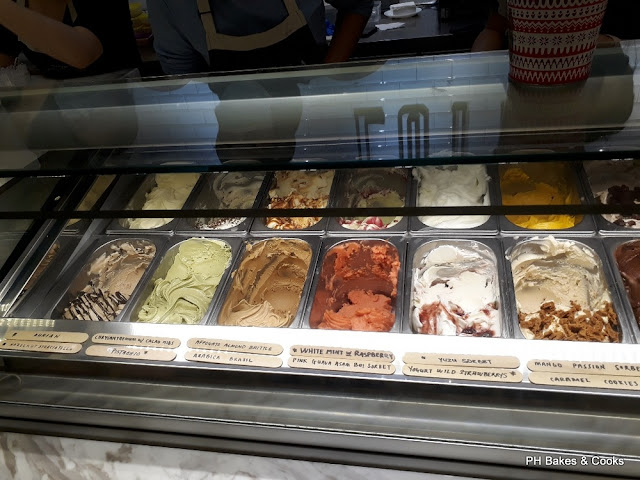 My partner remarked that prior to our visit he had always thought that Piccoli Lotti was a bakery. When asked why, he said "Lotti (roti) what?" hahahahaha... 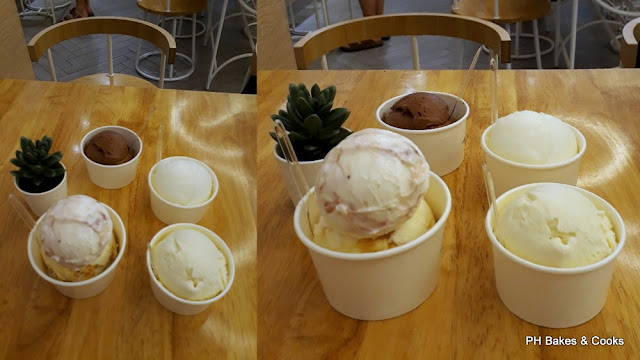 Guess who had 2 scoops? 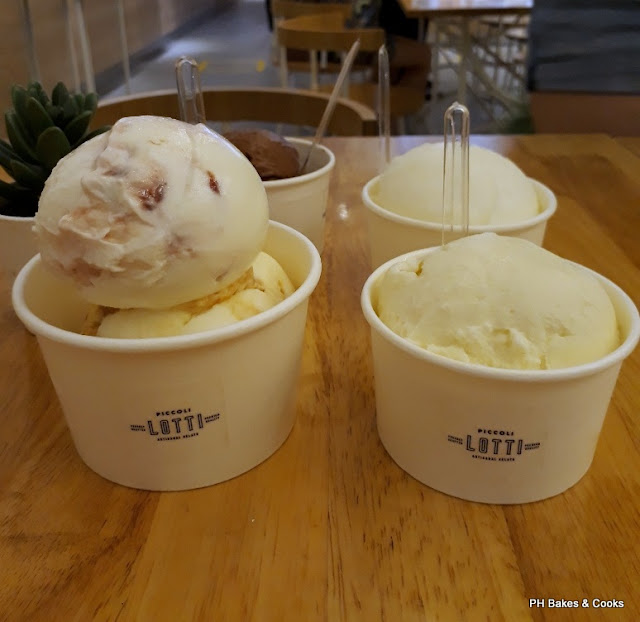 That is why madam, other people are thin and you are fat. Hah!
Posted by PH at 16:46