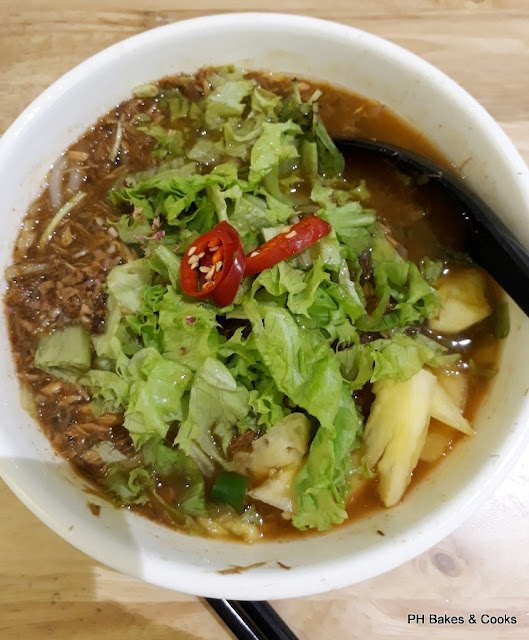 Continuing on from my Valentine's Day makan-makan, my Valentine was suddenly so adventurous. He suggested that we visit a restaurant that he heard about from his whatsapp group.


This restaurant, Ai Jiak (in Hokkien translates as "want to eat"), is situated in SEA Park which is not far from Damansara Uptown. But we had to brave the traffic jam which explains why we hardly venture out of our territory. 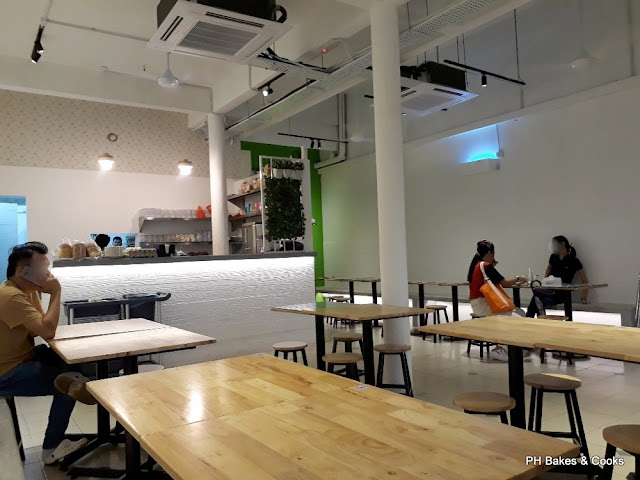 It was raining that Friday and as expected traffic was heavy and slow moving. But it was not too bad because we got there in less than 30 minutes. Best of all, as we were looking for a place to park, a car vacated a spot and we were all set to a smooth evening. 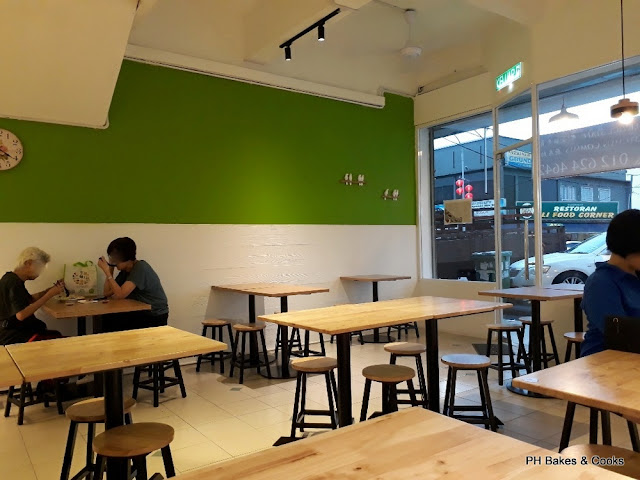 There were lots of tables available and we were seated in no time. 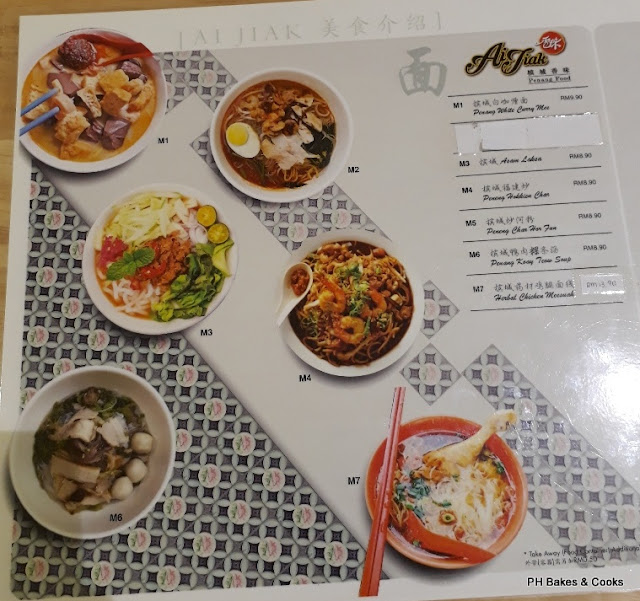 Looking at the menu, there were a few items that were not available. 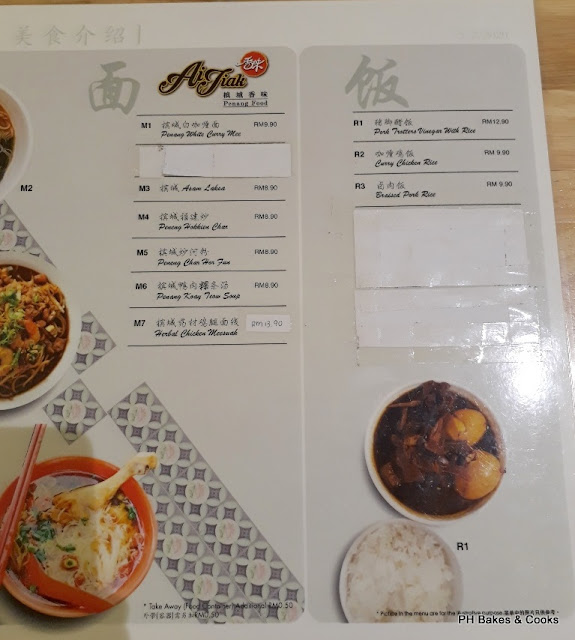 These items were blocked out with white paper. We later learnt from the chef that he was not confident in rolling out too many items since his kitchen staff were still being trained. 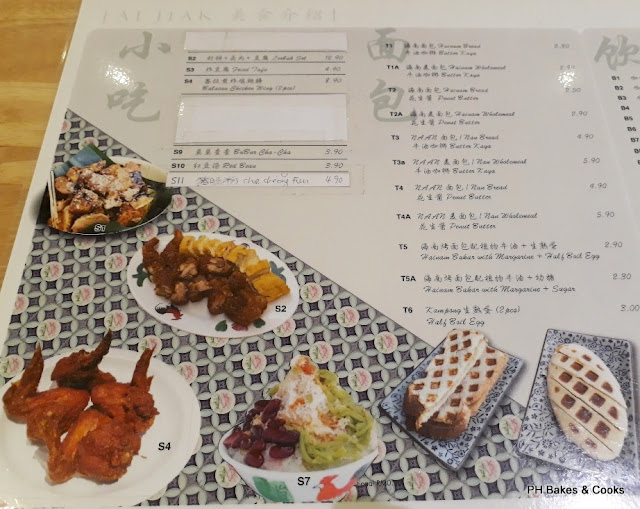 But it was OK because there were still enough dishes for us to choose. 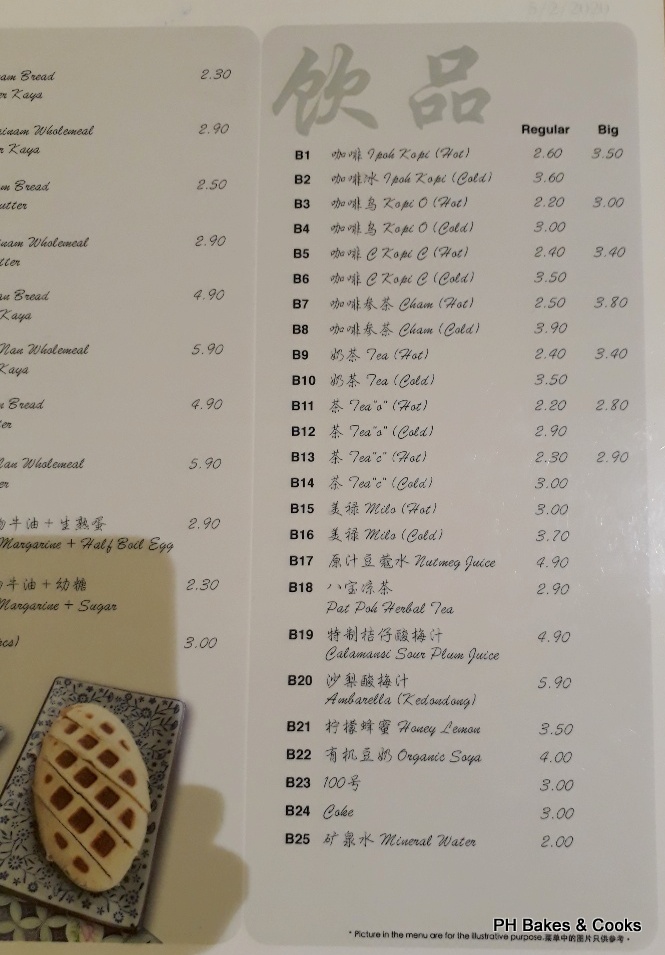 For drinks, when I spotted Calamansi Sour Plum Juice, I immediately chose that to share with my partner. 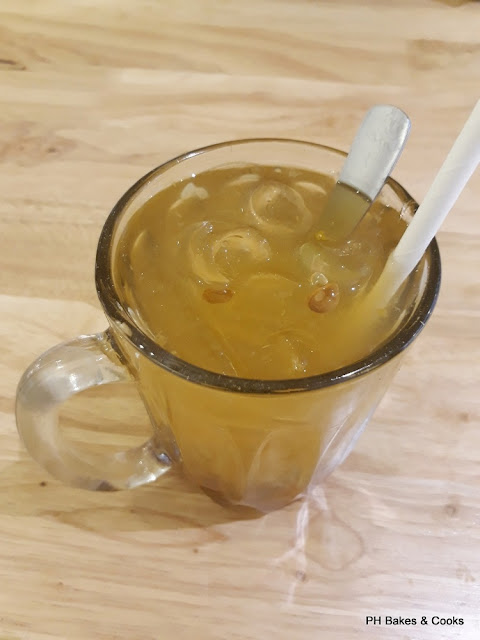 I'm afraid it was quite awful to me. It's not like the usual one that I love, it had a very strange taste. But my partner found it acceptable and he finished the drink.

For the dishes, we ordered the Asam Laksa, Penang White Curry Mee, Penang Char Hor Fun and Lorbak Set. All these to share between the two of us. 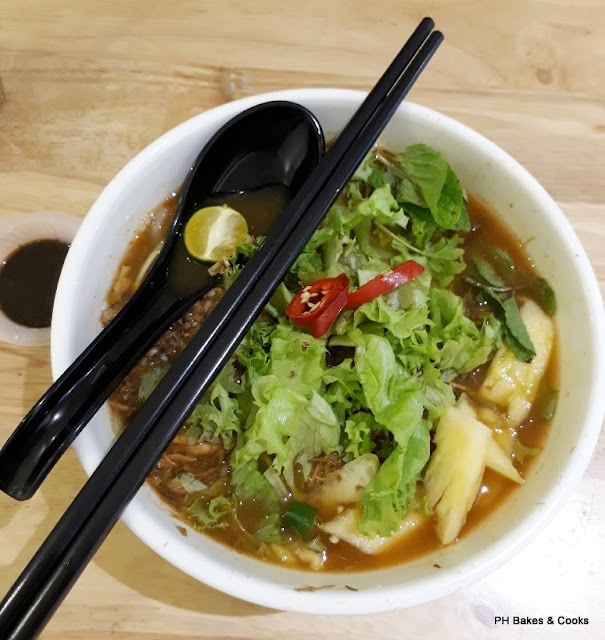 Asam Laksa is a must order since the chef is from Penang. 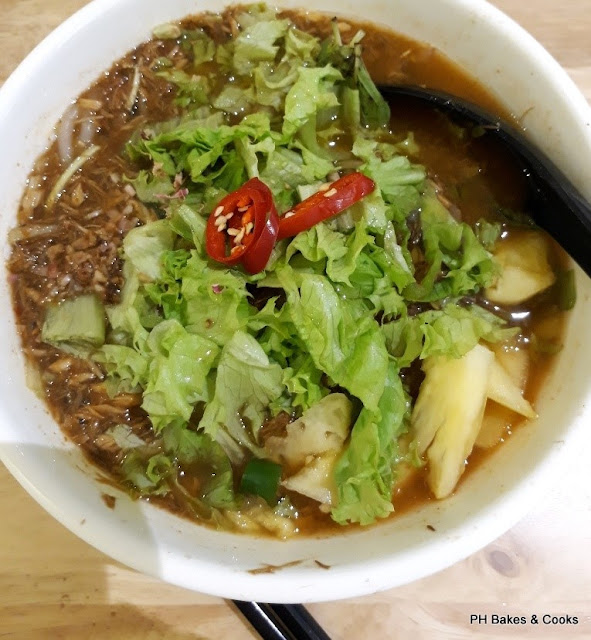 It met our expectations though I thought it was a little too tart (my partner found it all right). There were generous chunks of pineapple and flaked fish in the gravy. "Better than Ah Cheng Laksa" was my partner's verdict. Of course lah.

The asam laksa was served with a side of prawn paste (hae koh) which my partner told me not to take but I ignored him hah..hah... 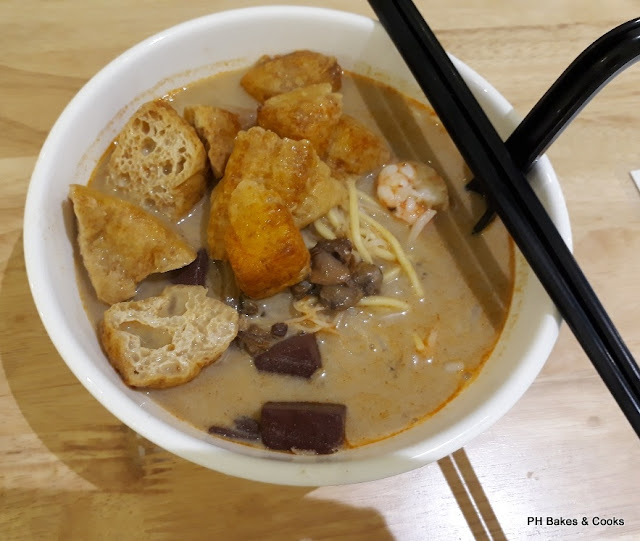 After I ate half of the asam laksa, it was time to exchange bowls. This is the Penang White Curry Mee, something I have not eaten before. 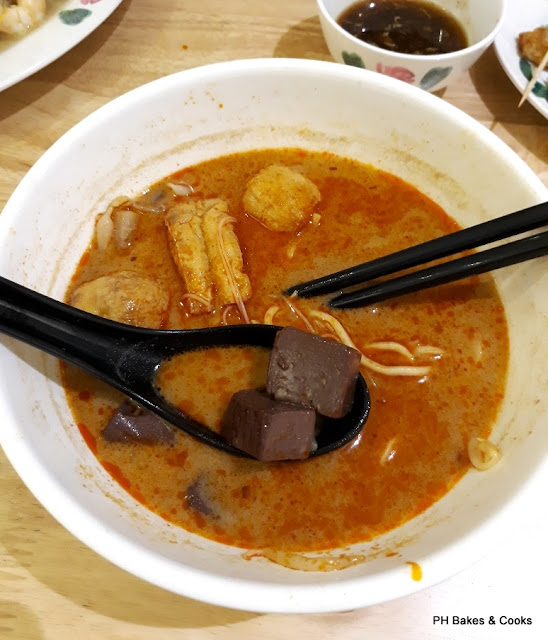 There were cubes of pig blood in the bowl, also something I have never eaten before. So it was time to experience pig blood and I braced myself, expecting it to be awful.

But no, it was surprisingly pleasant, soft with no disagreeable taste. If we revisit, I will order this Penang White Curry Mee  again because I enjoyed it. 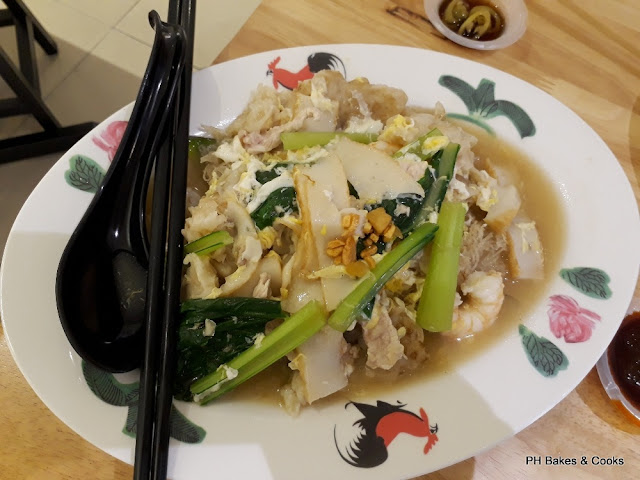 The Penang Char Hor Fun was a disappointment in terms of taste and the condition of the noodles. 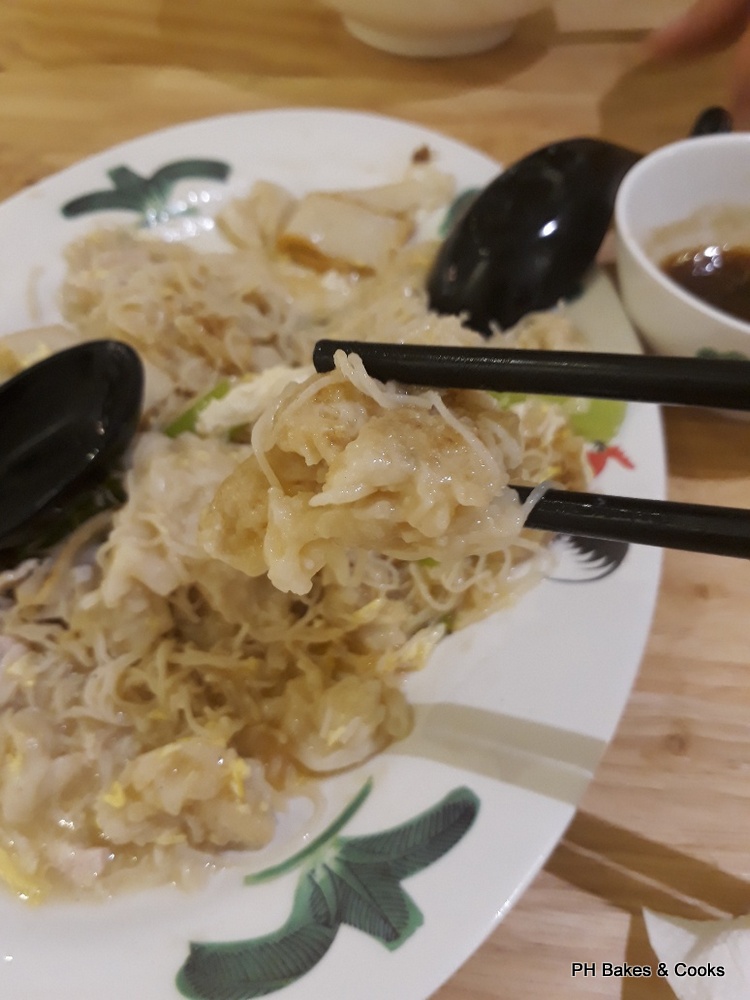 The koay teow was all clumpy and I could even taste raw koay teow. My partner agreed that this one was a major fail. It would do well for the chef to exercise closer supervision and quality checks.

Moving on, we found the Penang Lor Bak acceptable though I thought the five spice powder was a bit too strong. 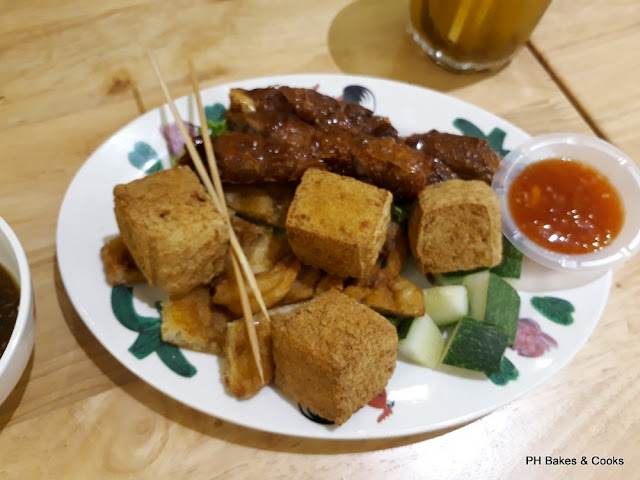 The chili sauce was nice but I did not like the sticky black sauce. I have had better. 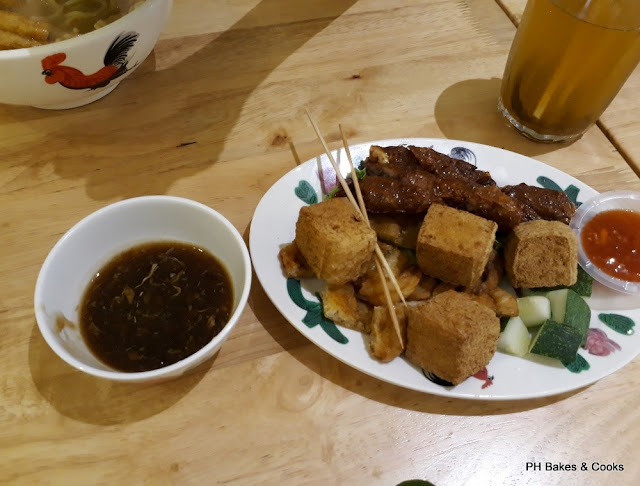 We we very stuffed that evening because we wanted to try as many dishes as we could. 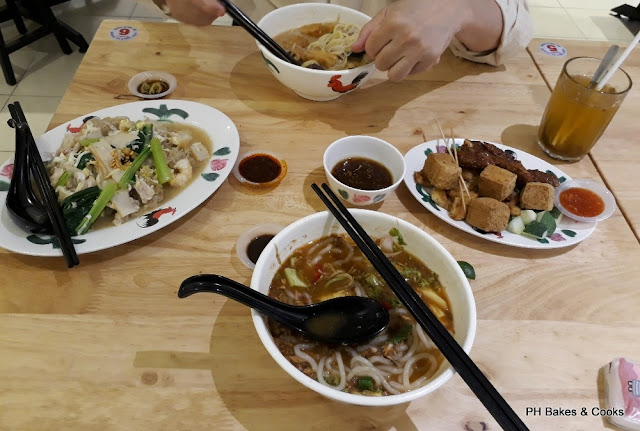 In the car on our way home, we were discussing our dinner when my partner mentioned cockles in the Penang White Curry Mee. Cockles?

I did not find any when I was enjoying the noodles. My partner said that he must have eaten them all as they were rather small. When I checked the photo, oh yes, I spotted the cockles hee...hee.... 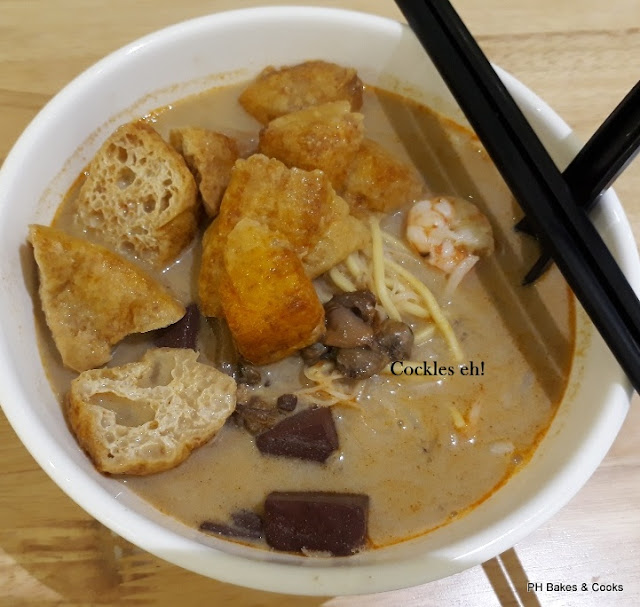 Well, that was a very romantic nice Valentine's Day dinner with some hits and misses. We might come back and as my partner said (while eating the asam laksa), it was worth the traffic jam.

See, you don't need to take me to Shangri La to make me happy. woot! woot! 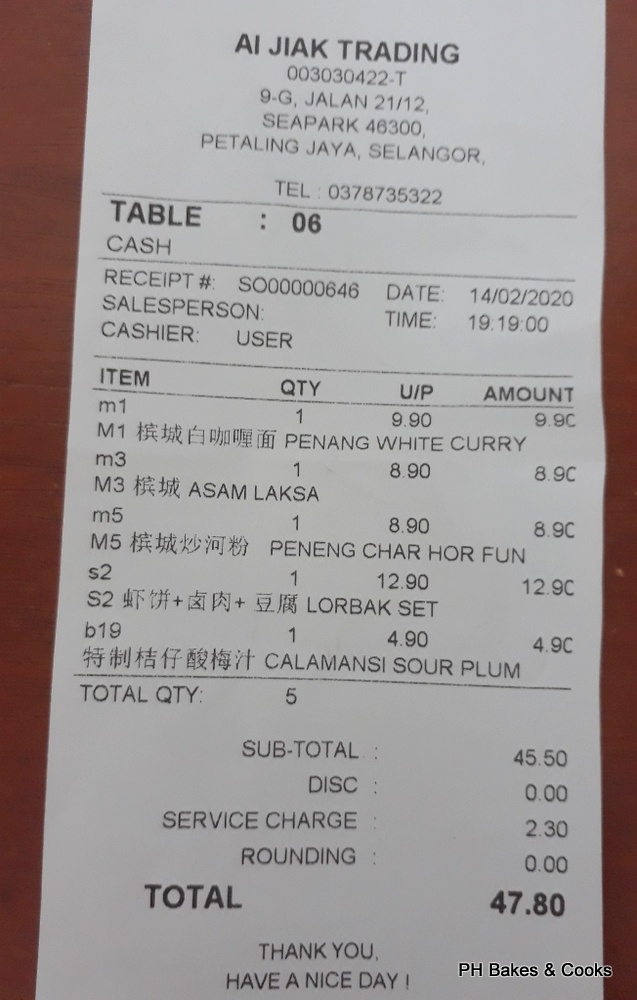