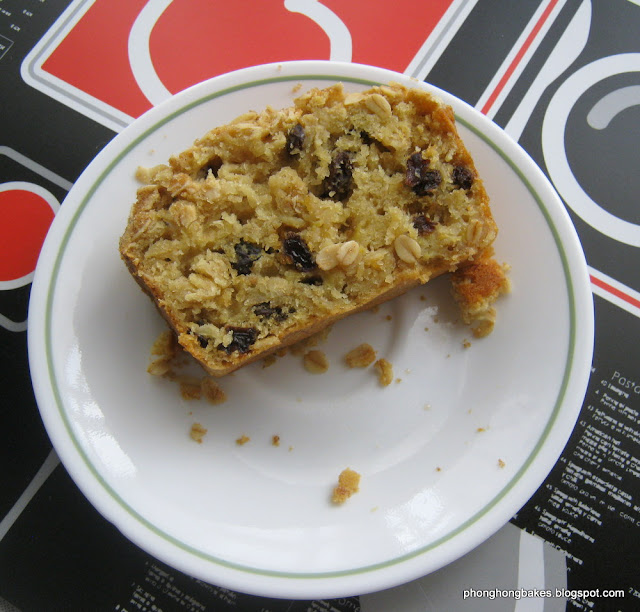 It has been a while since I baked, eh? So you could imagine that I was itching to bake something. The previous weekend I put 5 bananas into the freezer because they were quite ripe. So I defrosted 3 bananas and this was how they looked. 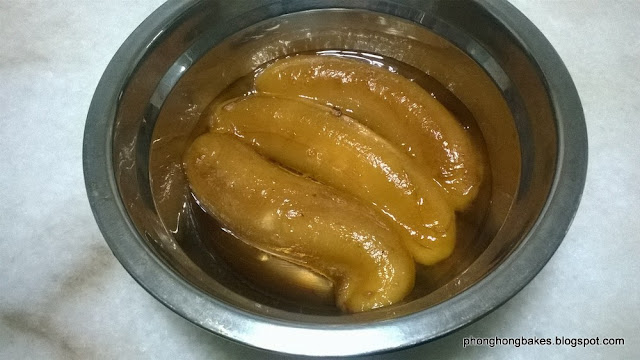 They were limp, soggy and watery. Eeeekkss!!! I took a sniff. They still smelt like bananas (of course). I poured away the liquids and mashed the extremely soft bananas.

This recipe is actually meant for Oatmeal Raisin Banana Muffins. Yes, muffins. But my muffin pan was right at the bottom of my stack of baking pans.

I was in no mood to shift the pans and I took the easy way out. Instead of muffins, I dumped the batter into a loaf pan.

This recipe calls for an oatmeal topping, some sort of streusel. I have never made anything like that and I was quite eager to give it a go. Look. 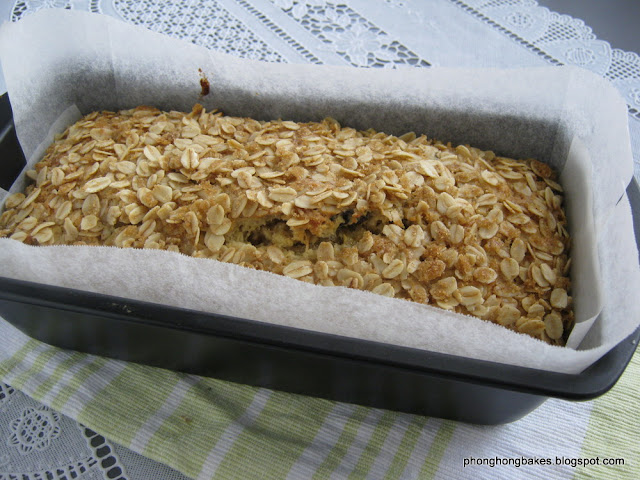 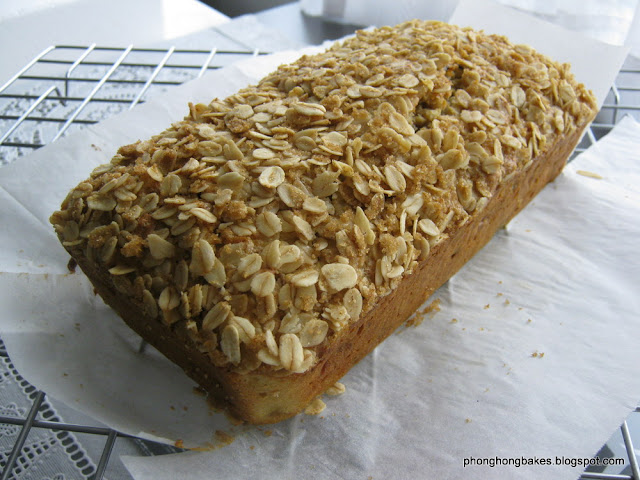 It was a very crumbly cake, of course, it was meant to be muffins. But still, this oatmeal banana bread turned out well. 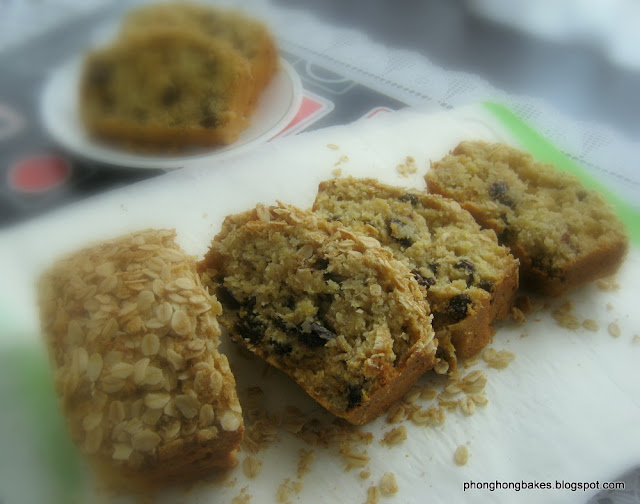 It was moist and smelled wonderful. Bananas and cinnamon are a perfect match. And best of all was the topping. While the cake was warm, the topping was very crispy. 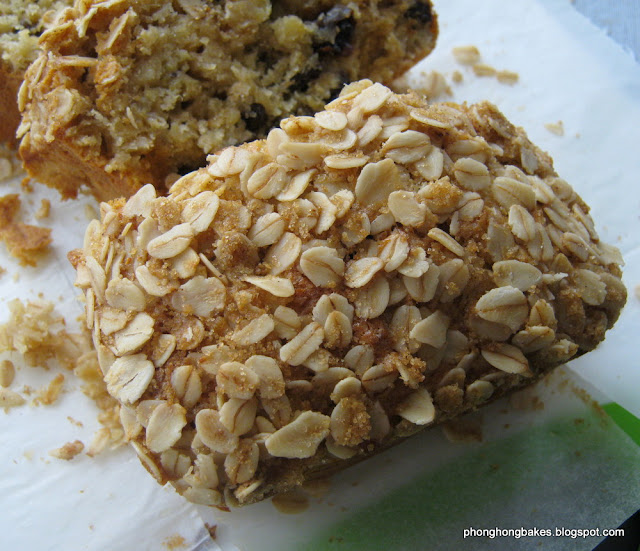 As I sliced the banana bread, some of the topping dropped off. I didn't let those go to waste. 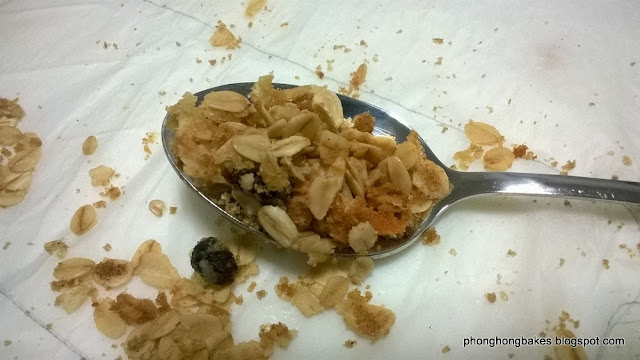 Yes, scoop up with a spoon and enjoy. It was very nice. 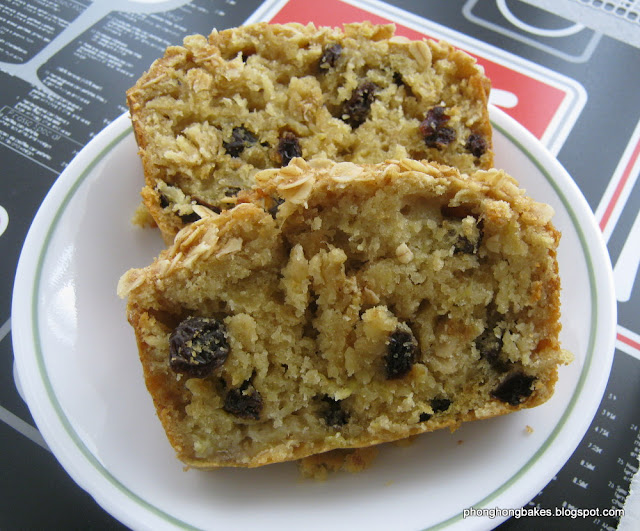 I will bake this again as muffins which are easier to serve and eat. There's no need to slice, just bite and then throw away the muffin liner. No plates required. 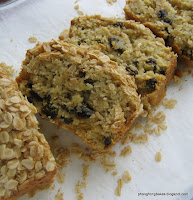 Note : The original recipe is meant for muffins but I have baked in a loaf pan.

Method :
1. To make the topping, combine all the ingredients and set aside.
2. In a mixing bowl, mix mashed bananas, melted butter, beaten egg and plain yogurt.
3. In another mixing bowl, mix flour, brown sugar and ground cinnamon
4. Pour the wet ingredients into the dry and fold to combine.
5. Fold in raisins and pour batter into a loaf pan.
6. Sprinkle the topping ingredients over the batter and bake at 160C for 50 minutes or until skewer inserted into the center of the cake comes out clean. 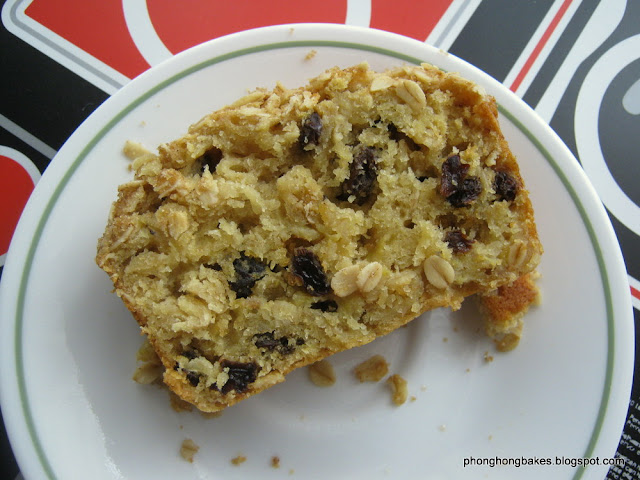