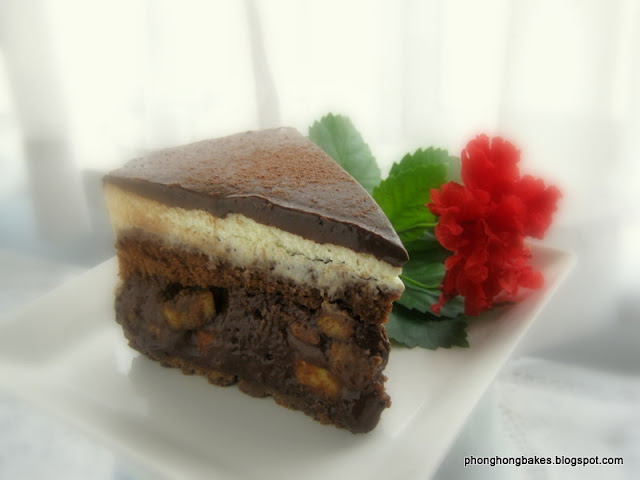 This cake, inspired by the Peanut Butter Banana Cake I baked previously, came about because (again) I needed to clear off some ingredients that were sitting idle in the fridge. Top priority was to use up an expensive organic dark chocolate spread which I bought just because it was on special offer. 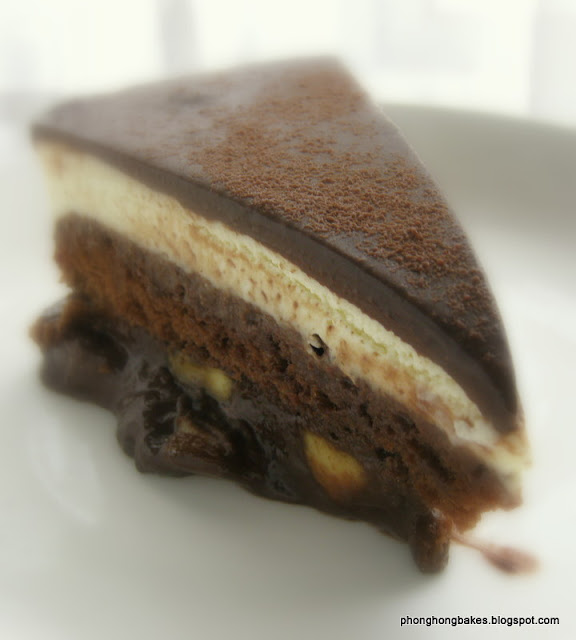 Besides, I had one set of whipping cream that came in a pack of three that was taking  up space. The expiry date is January 2016 and knowing me, I would probably exceed that date and I would end up wasting another expensive ingredient. 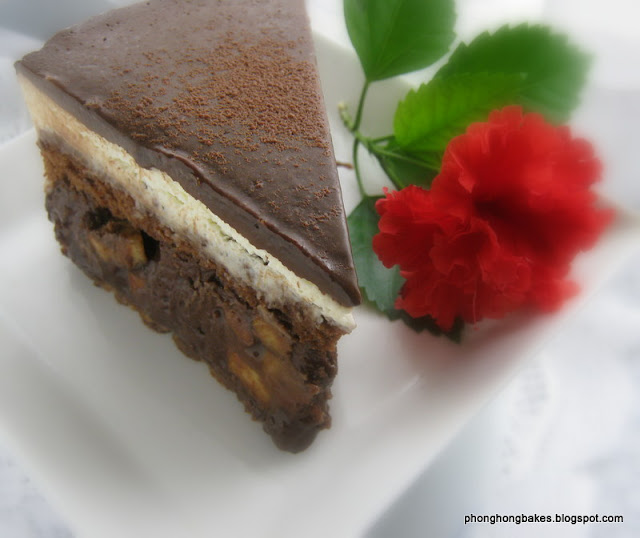 Not only that, I had leftover Milo Chocolate Chip Cookies and these would be put to good use as the base of the cake. Armed with the experience I had with the previous cake, I was fairly confident that I would be able to handle this cake with finesse.

But no, I made a mistake midway through by forgetting to spread whipping cream on the chocolate banana layer before topping with the chocolate sponge cake. Drat! I was so angry with myself. 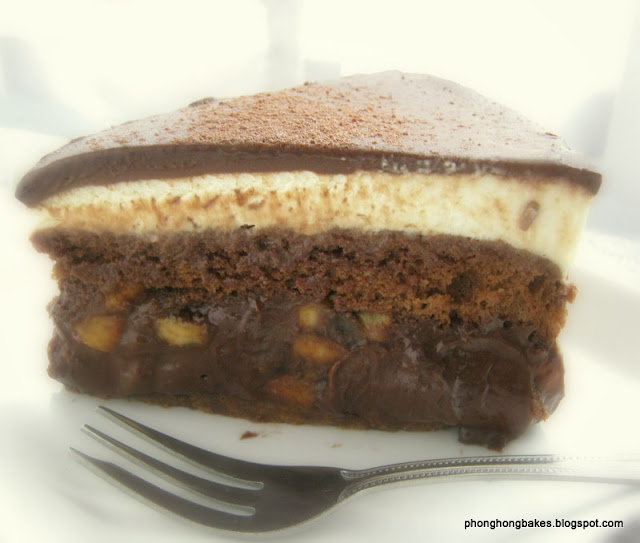 I know the name A Dream in Chocolate sounds rather poetic bombastic (no doubt influenced by a dessert I had at El Cerdo) but in the midst of the dream, I also had a nightmare. Look at the horror and devastation : This slice collapsed in a heap, its chocolate banana Milo innards spilling out in a glorious mess. How's that for chocolate gore? 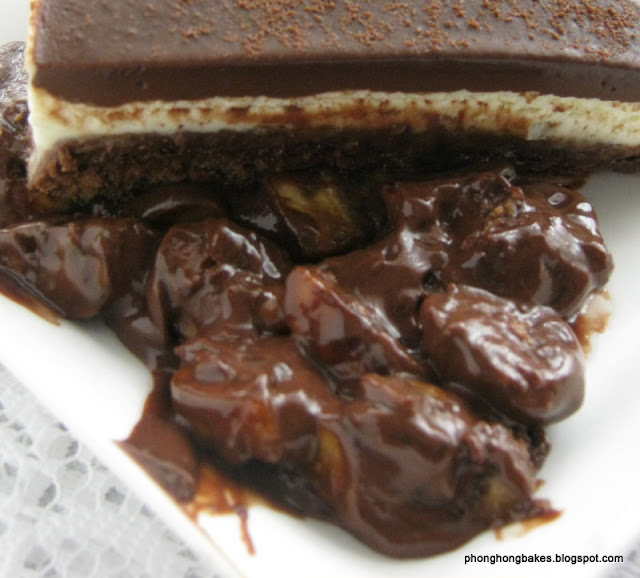 I know many of you would tell me, come, come, PH. Let me help you clean up the mess. Give me a spoon! Sure, thank you for volunteering but I already cleaned up the mess. And what a enjoyable clean up that was! 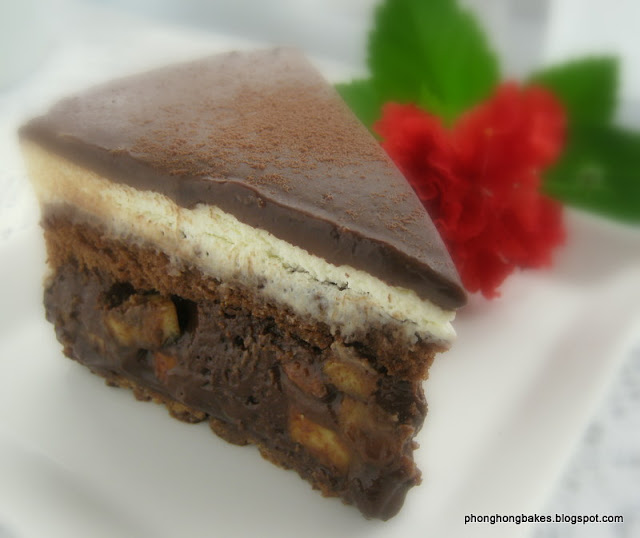 Speaking of the dark chocolate spread, as I mixed it with whipping cream, all I smelt was a deep dark chocolate scent. I mean, I like dark chocolate but it was just so one dimensional, so dead. But when I added Milo powder to it, ah..... that's when it was transformed into this ooey goey malty chocolaty cream that you just want to eat by the scoopfuls. Add bananas to that, kapow!! 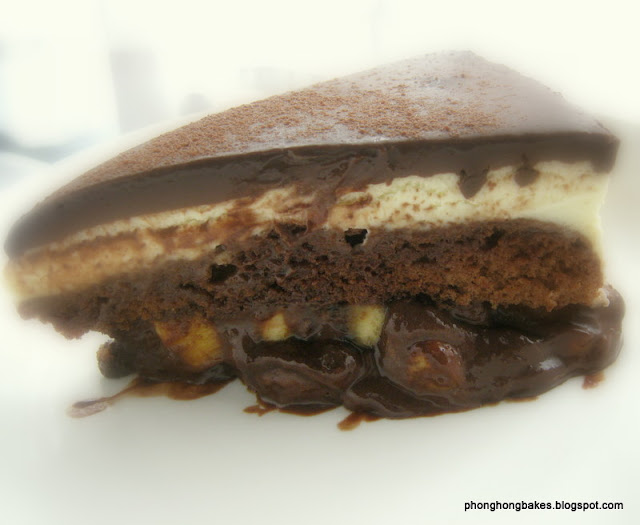 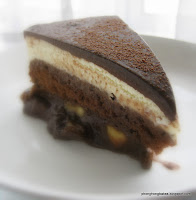 Method :
1. Mix crushed Milo chocolate chip cookies with melted butter.
2. Pour the mixture into an 8" round tin with a removable base. Press the mixture firmly into the bottom of the pan and set aside.
3. Whip 200ml of the whipping cream until stiff peaks form. Set aside in the fridge.
4. In a mixing bowl, put chocolate spread and beat while pouring 200ml of whipping cream bit by bit (to avoid the whipping cream from splashing all over the place). Beat until the mixture is light and fluffy.
5. Add Milo powder and beat until well mixed.
6. Pour the mixture over the cookie base and use the back of a spoon to spread the mixture evenly.
7. Slice the bananas and arrange over the peanut butter layer and press the bananas into the cream. Add another layer of sliced bananas and press onto the mixture to ensure thatthe bananas are compacted into the creamy layer.
8. Spread a layer of the whipped cream to cover the bananas. Be generous.
9. Lay the sponge cake over the whipped cream.
10. Spread the remaining whipped cream over the cake and chill in the fridge.
11. Make the ganache and when the ganache is cool, pour over the cake, tilting the cake pan to spread the ganache evenly.
12. Sift extra Milo powder onto the ganache.
13. Refrigerate the cake overnight to set.

To make the chocolate ganache :
1. Bring the whipping cream to a boil.
2. Pour the hot cream over the dark chocolate and leave to sit for 5 minutes.
3. Stir the chocolate mixture until it forms a smooth glossy mixture.

Note : I placed the chocolate and butter into a glass measuring jug to make it easier to pour the ganache) 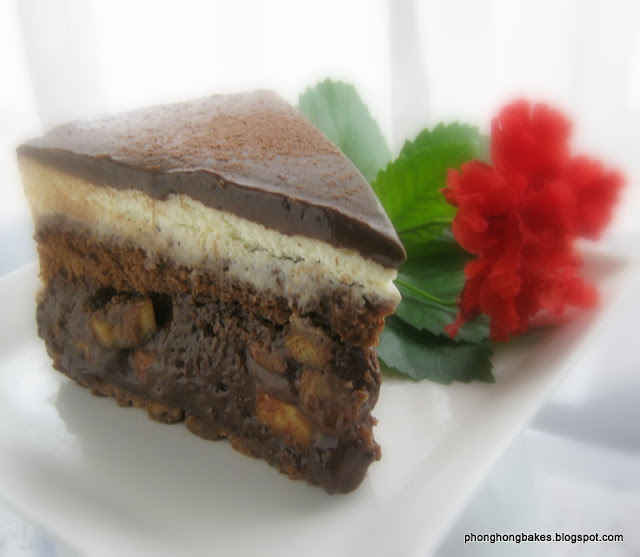