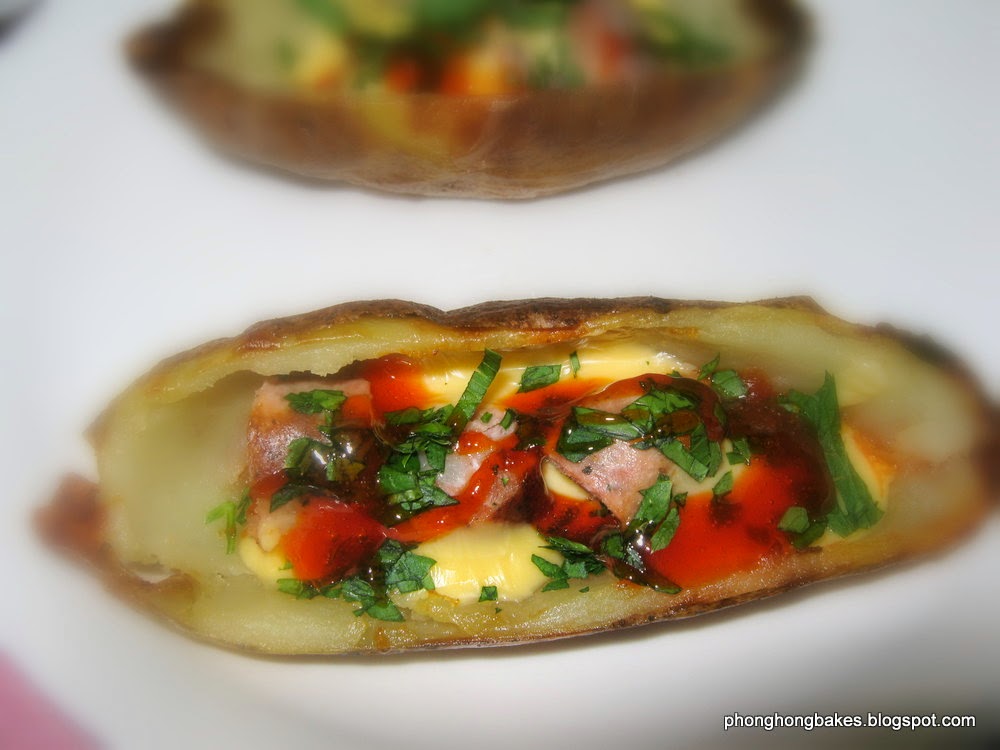 The only thing right about my Pizza Potato Skins is the potato skins itself. All the other ingredients were all wrong. I did not have pizza sauce, no mozzarella cheese and the Italian sausages tasted weird. But I wanted Pizza Potato Skins. Badly. 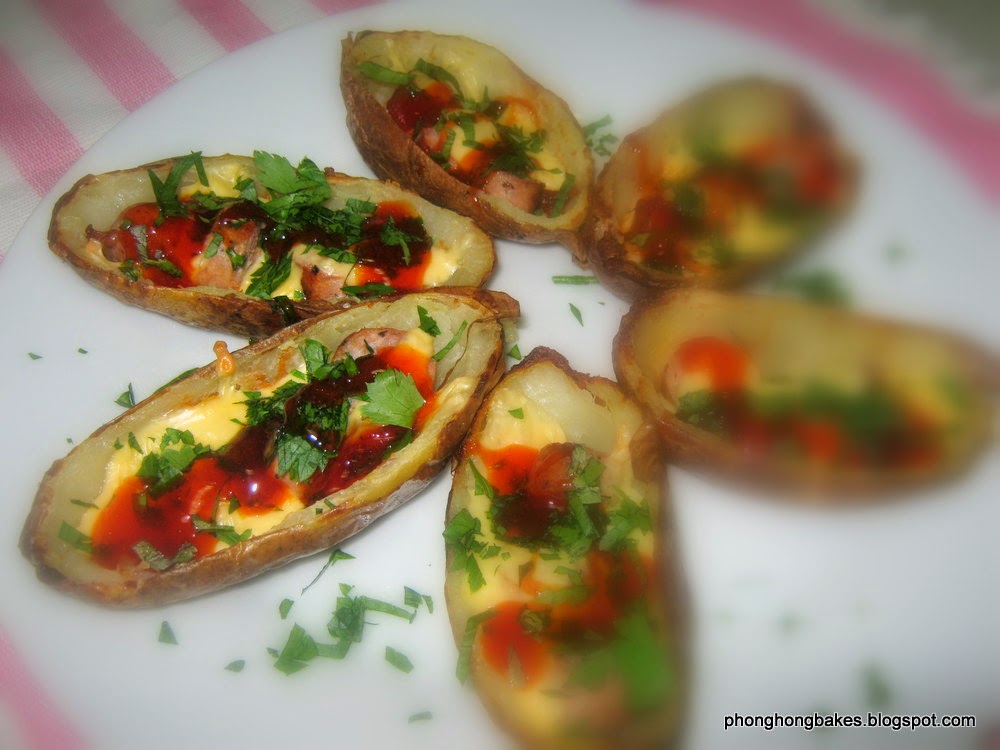 And I've got to tell you there's a lot of work here. As far as I am concerned of course. To some people, potato skins are a breeze. The Pioneer Woman sure makes it look easy. But believe me they are not. Took me a few hours to get it all together. First up, bake the potatoes. And before you do that you have to scrub clean the skin, dry it and then rub with oil. After a sprinkling of salt, you bake it in the oven for about 40 minutes. While all that is going on, you get your other ingredients ready. Like frying the Italian sausages or bacon or whatever it is that need to be fried. 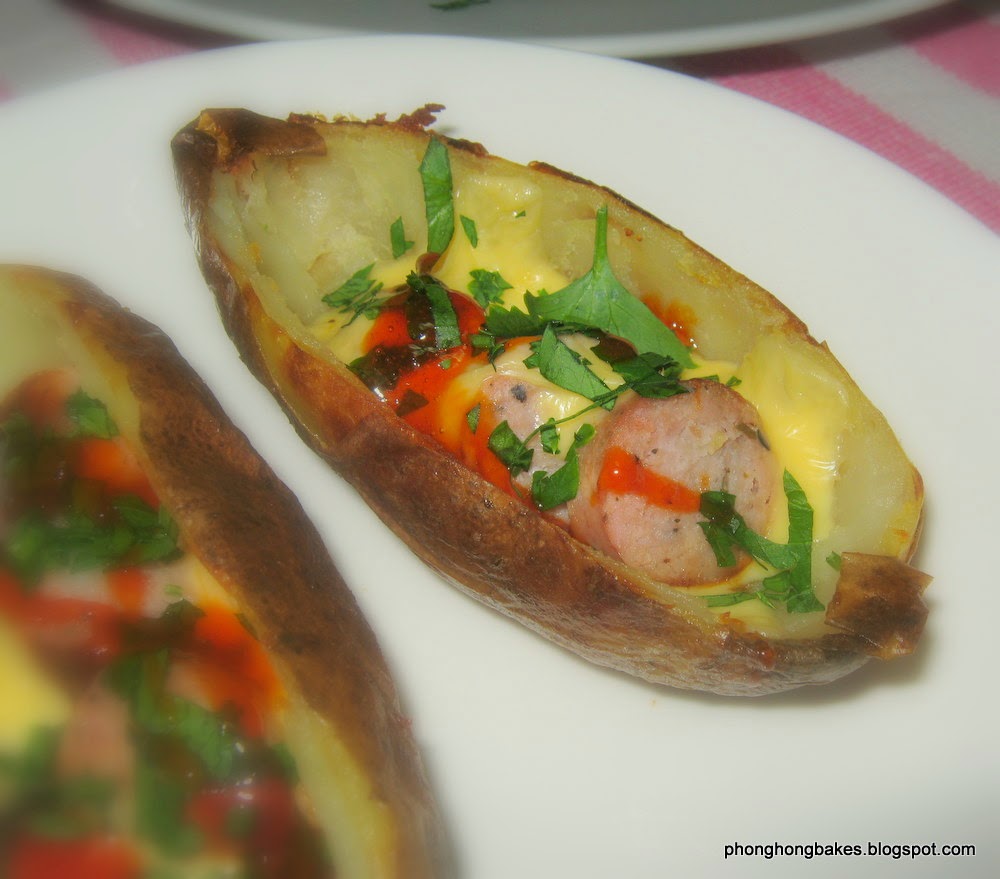 And before you can dig out the flesh, you have to wait for the potatoes to cool first. I did this last Sunday and it was a good thing that there was a distraction for me. Amelia of Amelia's Dessert was on RTM 1's Pelik Tapi Sedap. So I watched my friend in action while my potatoes were cooling. You did great, Amelia! My only complaint is that your segment was too short. While local celebrity Dynas was cooking Amelia's dish, I had to nip back to the kitchen and do some digging. It was quite a job digging out the potato flesh, all the while being careful not to break the skin. Dig, dig, dig. Sweat, sweat, sweat. It was a very hot afternoon. Which explains why I did not take photos of the whole process.

After that, you have to brush the potato inside and out with oil and put it back in the oven for 5-7 minutes each side. Once this part is done, you can assemble your "pizza". I hate to say that I used pasta sauce in place of pizza sauce and cheddar cheese in place of mozzarella. I swore that I could have just eaten the crispy potato skins as they were. Kosong. But I loaded them with all the wrong ingredients before sprinkling them with chopped Italian parsley (now that, I like a lot!). 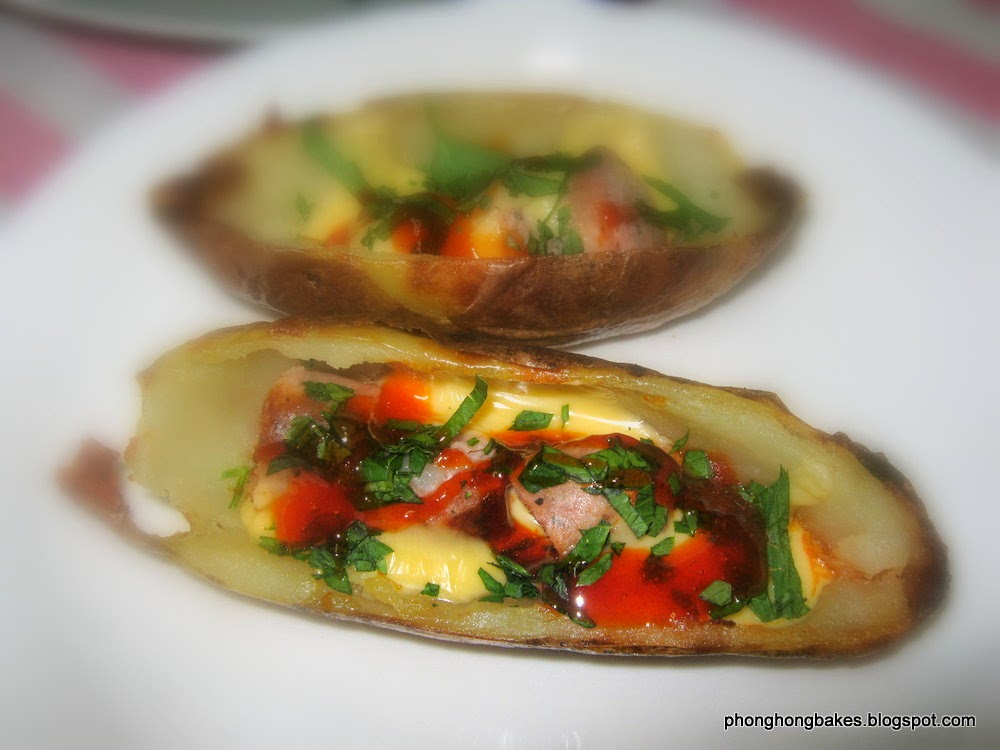 After the customary photo shoot, I grabbed a potato skin. Still hot and crispy. So was it good? Are you kidding me? These are potato skins, so how could they not taste good? But if only........I had the right fillings. But still, I was happy. One by one the skins disappeared. I have got to do this again. With the right fixings of course. So if you have nothing better to do on a Sunday afternoon, make potato skins. It's worth the sweat. 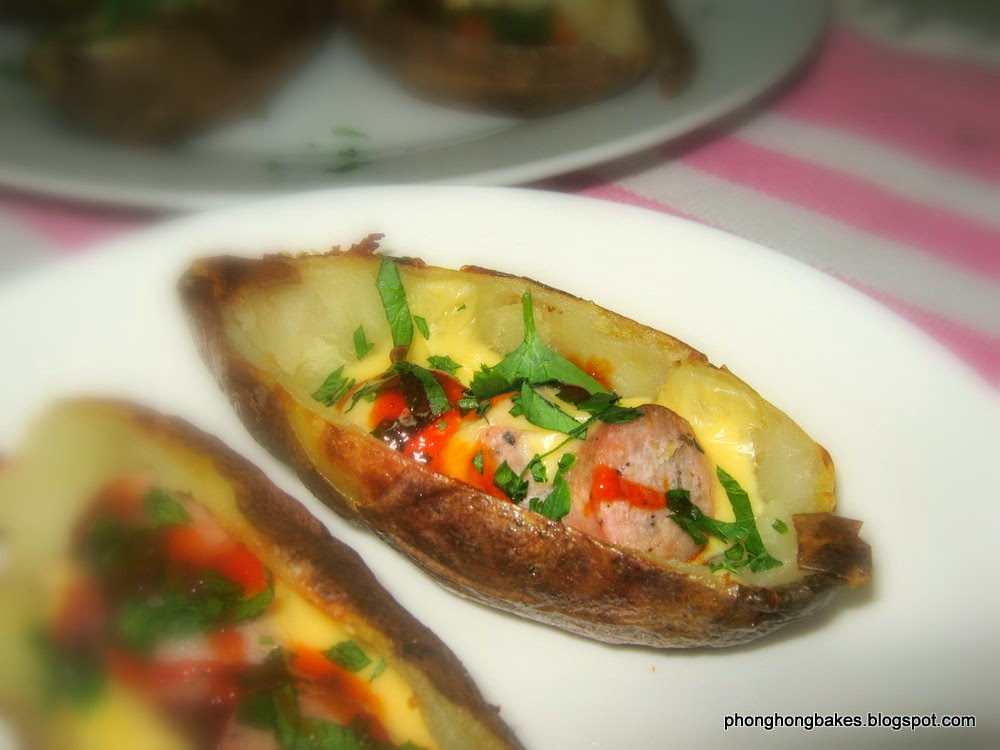 Ingredients :
- 4 whole Russet Potatoes
- Olive oil
- Sea salt
- Marinara or Pizza Sauce (I used Pasta sauce, did not like the taste)
- Grated Mozzarella Cheese (I used sliced Cheddar cheese, not too bad)
- Diced pepperoni (I used Italian sausages that tasted funny. Or is it me?)
- Minced fresh parsley

Method :
1. Preheat oven to 200C
2. Scrub potatoes very clean and dry them.
3. Rub the surface of each potato with olive oil. Sprinkle with sea salt.
4. Bake until the potatoes are tender and the skins are crisp, about 40-45 minutes.
5. Cut the baked potatoes in half. The use a spoon to scoop out most of the insides leaving a bit of a rim all around.
6. Brush the inside and outside of each half with olive oil.
7. Place the potatoes skin side up and return to the oven for 5-7 minutes. Turn them over (using tongs) and put them back in the oven for a few more minutes or until the potatoes are crisp.
8. Remove them from the oven and set aside.
9. To assemble the skins, fill each skin with a spoonful of marinara or pizza sauce. Add a good amount of grated cheese and sprinkle on some diced pepperoni. Return them to the oven just for a couple of minutes or until the cheese is melted.
10. Sprinkle with minced parsley and serve immediately. 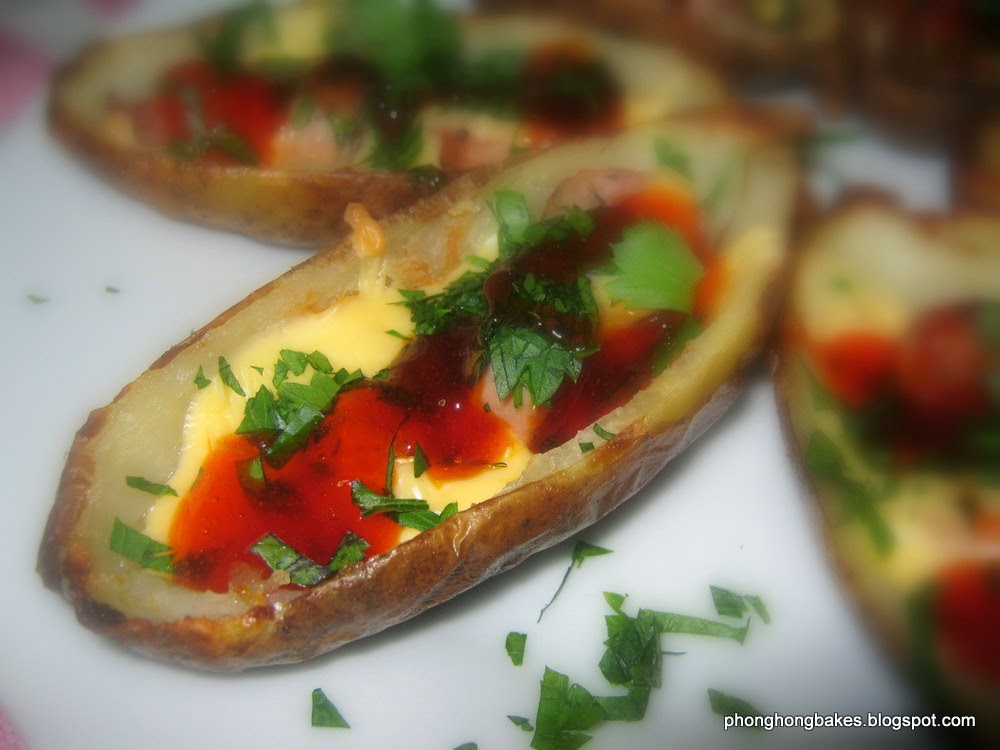 This post is linked to the event, Little Thumbs Up organised by Zoe of Bake for Happy Kids and Doreen of My Little Favourite DIY and hosted by Jasline of Foodie Baker.
Posted by PH at 08:06

Email ThisBlogThis!Share to TwitterShare to FacebookShare to Pinterest
Labels: Potato