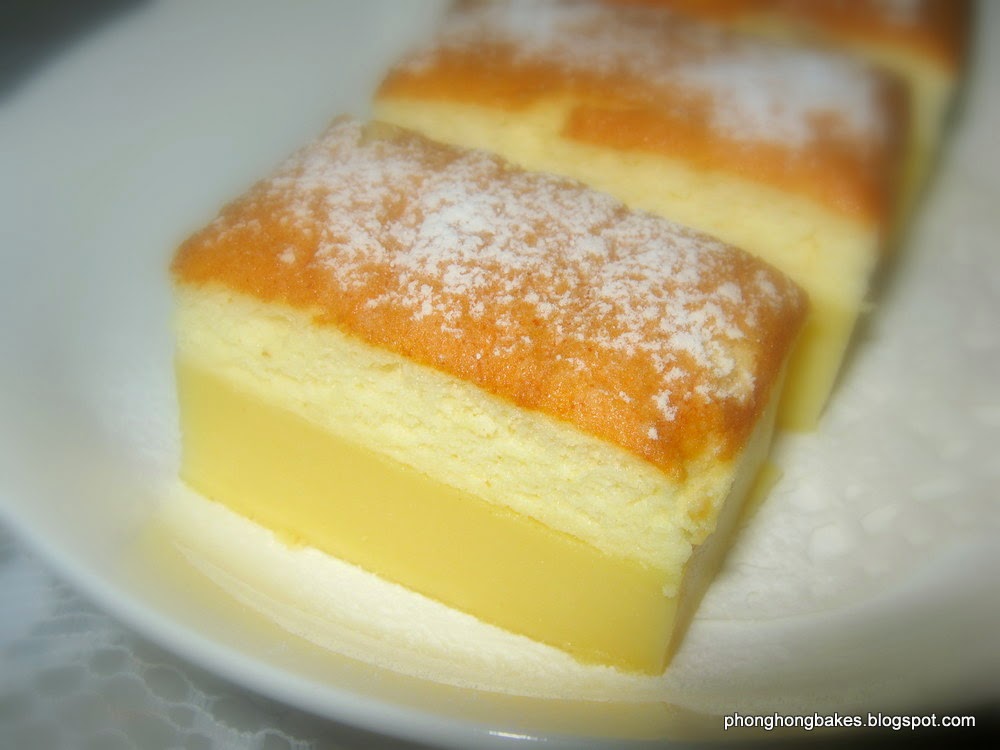 This cake is a curiosity. One batter but yields three cake textures. Of course I was curious and I wondered if I would I be able to produce the three layers. From what I read, most people managed only two layers. What if I messed up and the cake did not have any layers? 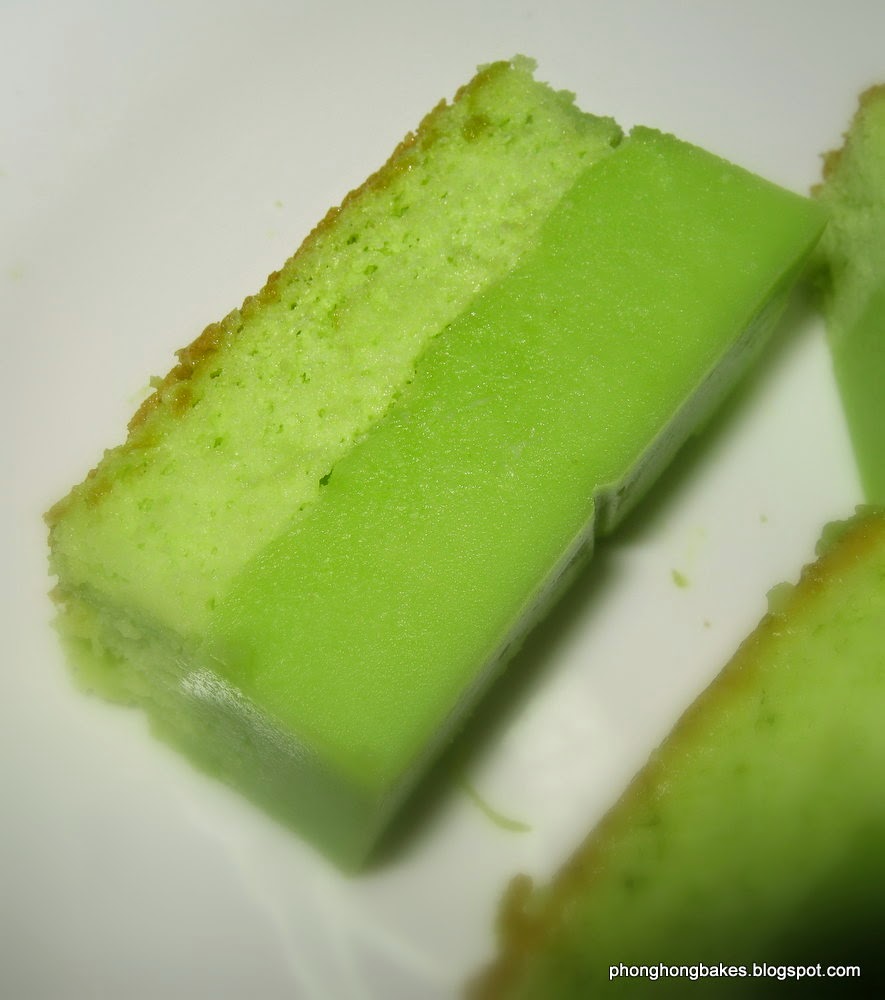 My first trial run took place the previous Saturday. The same day I baked Pandan Chiffon Cake. I called it a trial run because I knew I would not get it right the first time. And sure enough I did not do a good job. The top of the cake wasn't brown enough but the cake was already set. That's what I thought because a skewer inserted into the center came out clean. When I sliced the cake, the middle part was all gooey. But I did get the two layers. Last weekend I tried again, using the original recipe. 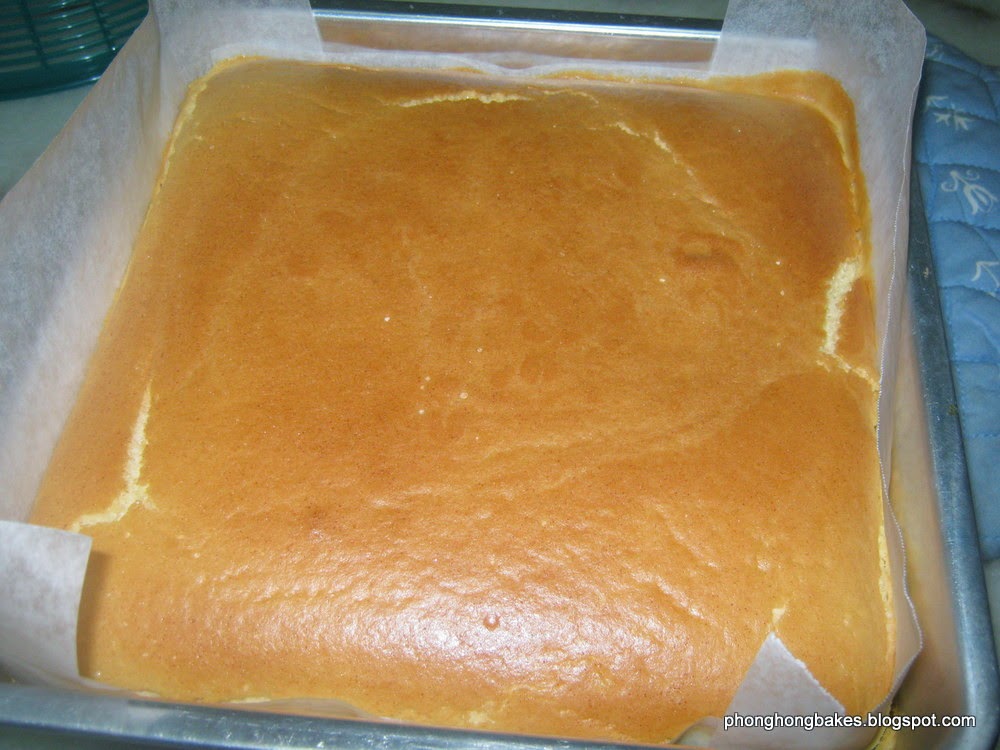 My cake cracked a little bit here and there. And once taken out of the oven and cooled, it shrank and got all wrinkly on the surface. But I understand that it is normal. 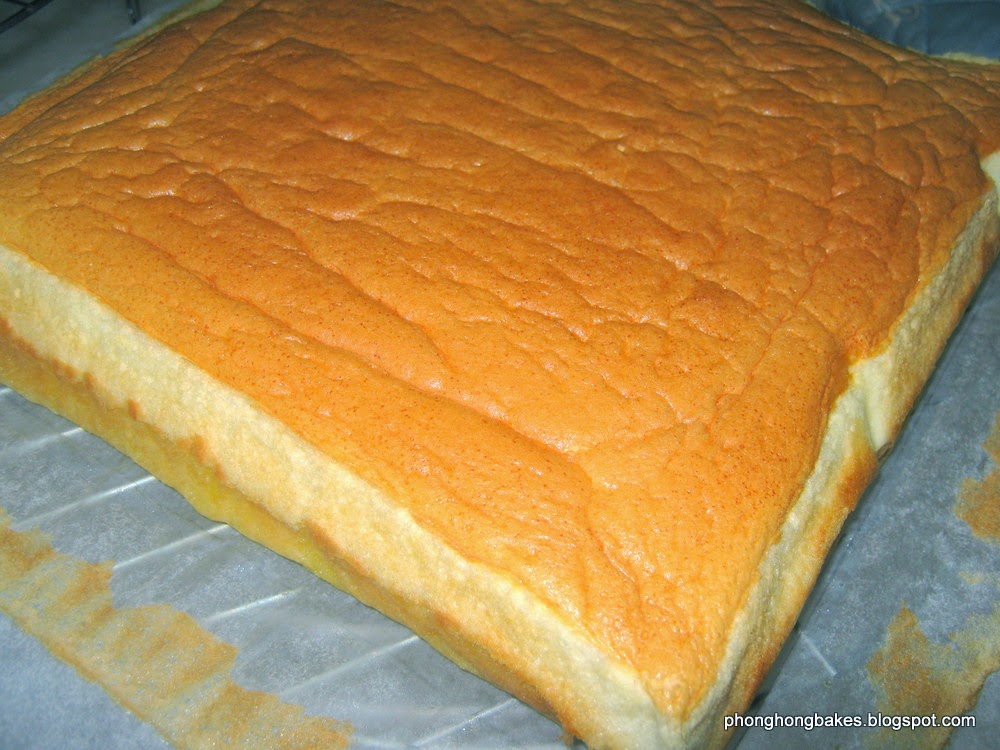 I let the cake chill overnight before slicing it. And of course I was anxious to see if I managed to produce the three layers of cake. Nope, did not. I only see two layers. The custard layer is very dense, not custard-like at all.  This must be due to the way I mixed the batter. But I was not disappointed. 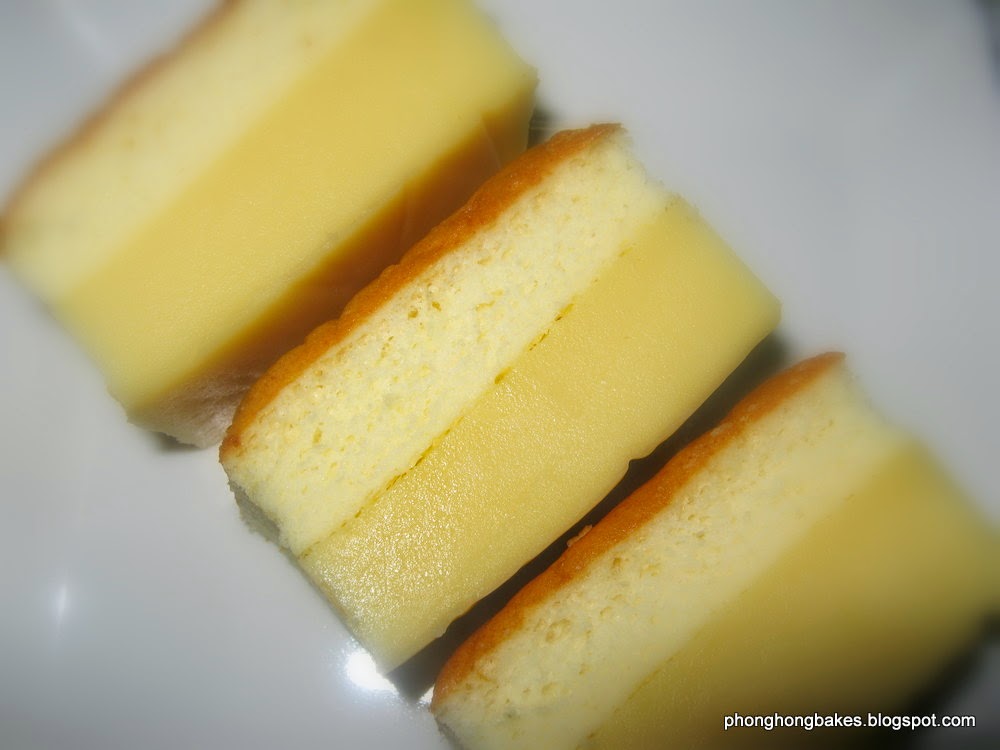 When I tasted the cake, I found that it was just ok for me. I could detect the smell of milk (not my favorite smell, I'm afraid) and in future I should add another teaspoonful of vanilla. The sweetness was just nice, perhaps adjusted for the extra sprinkling of icing sugar on top. 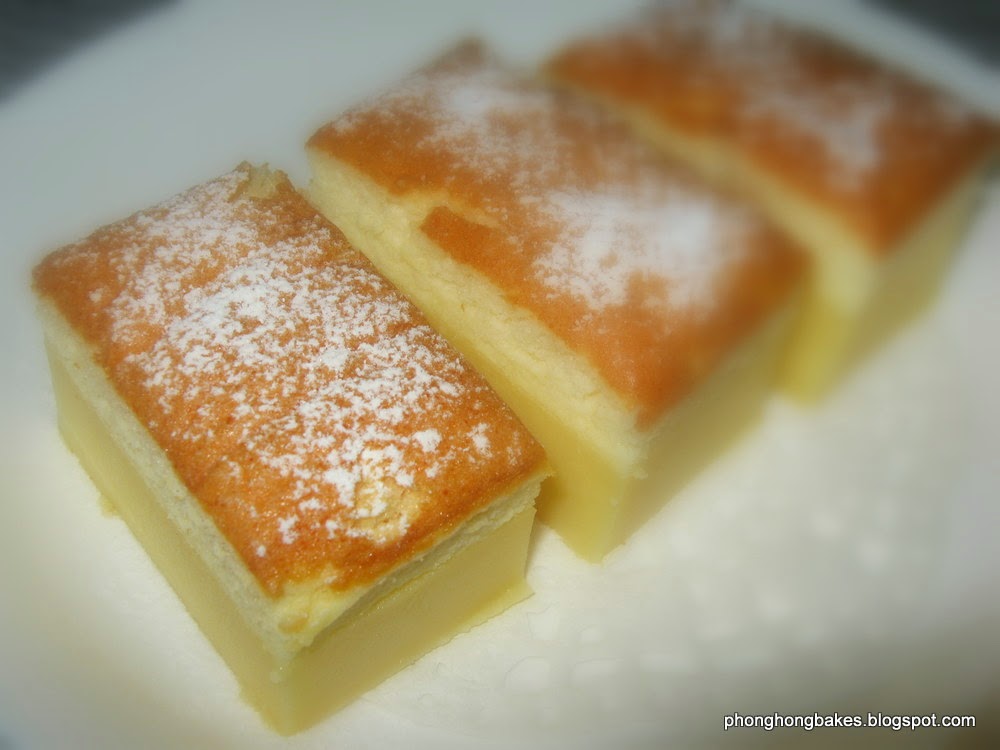 Curiosity aside, honestly I did not find anything special about the taste of this cake. Perhaps I should try the pandan version again and decide if this cake will make it to my regular baking list. 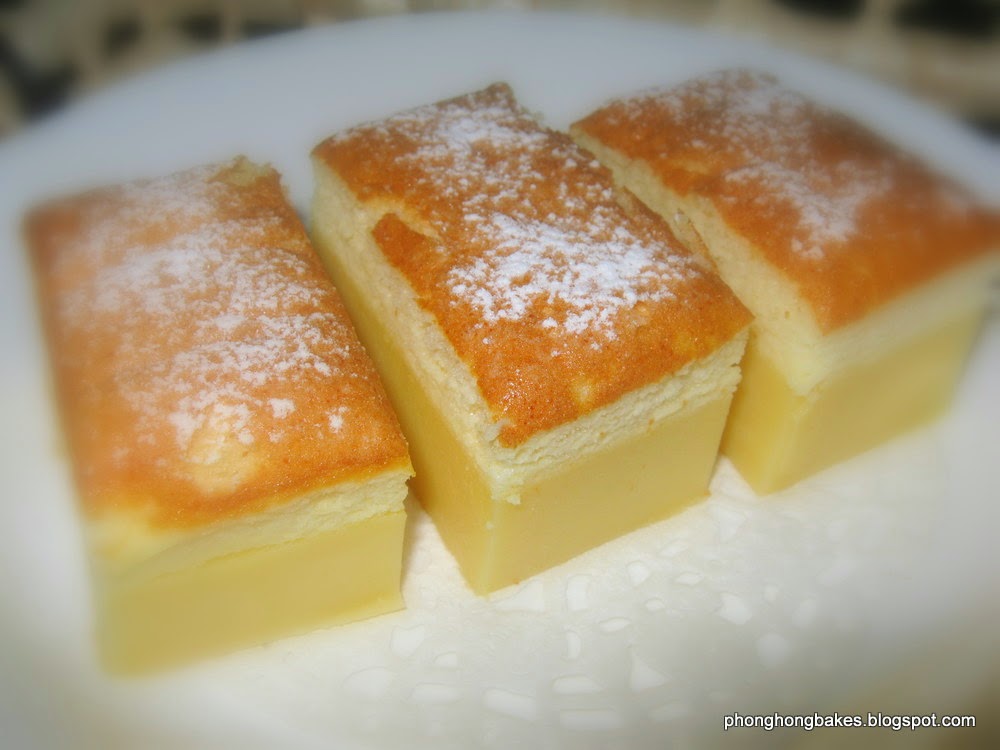 Overall, this is not a difficult cake to bake. The egg yolk batter is very runny due to the volume of milk used. At first it felt kind of weird when I mixed the meringue into this very liquid mixture. Other than that, it was a breeze and the only "worry" is if the cake would yield the 3 distinct layers. Even with two layers, I think you should give yourself a pat on the back. 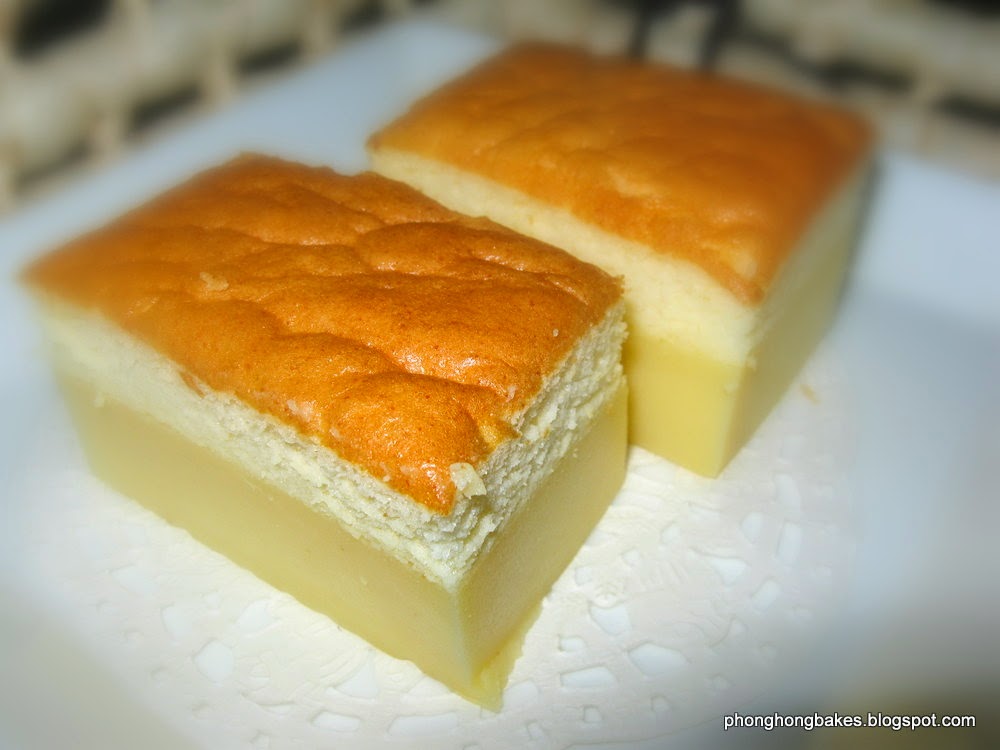 1. Preheat the oven to 325°F (I used 140C because my oven is very hot). Lightly butter or grease a 8"x8" baking dish. (I used a 9" pan)
2. Melt the butter and set aside to slightly cool. Warm the milk to lukewarm and set aside.
3. Whip the egg whites and vinegar (cream of tartar) to stiff peaks. Set aside.
4. Beat the egg yolks and sugar until light. Mix in the melted butter and the tablespoon of water for about 2 minutes or until evenly incorporated.
5. Mix in the flour until evenly incorporated. Slowly beat in the milk and vanilla extract until everything is well mixed.
6. Fold in the egg whites, 1/3 at a time. Repeat until all of the egg whites are folded in.
7. Pour the batter into the prepared pan and bake for 45-60 minutes (60 minutes) or until the top is golden. Allow cake to completely cool before cutting and then dust with confectioner's sugar. 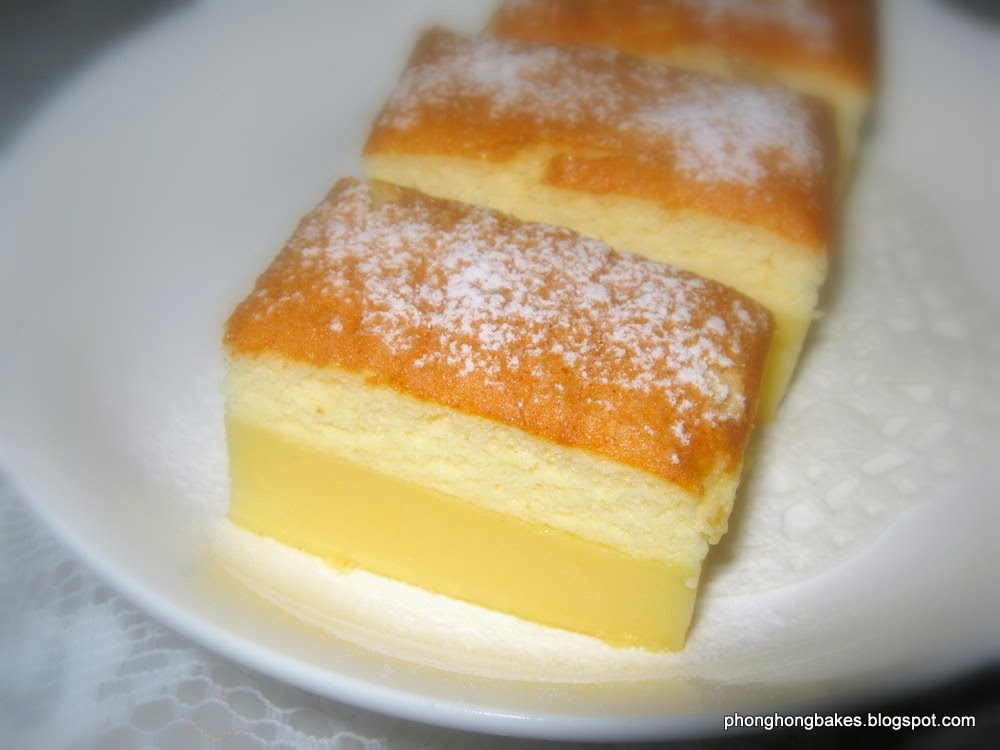