What's Green And Incredible? It's Not The Hulk 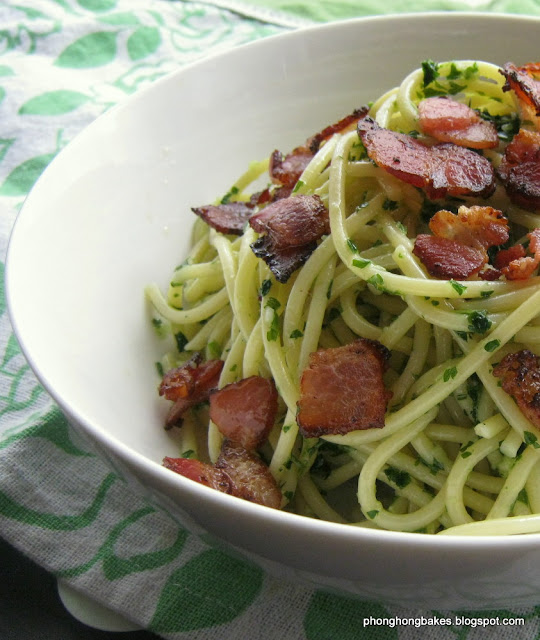 When I was a teenager, The Incredible Hulk was one of my favorite TV Shows. Bill Bixby played Dr David Banner who turns into this huge foul tempered green muscular guy when he gets angry (in the process, his shirt get torn but not his pants).


When provoked, Dr David Banner would say "Don't make me angry. You won't like me when I'm angry". Just like my mum when we drove her up the wall.

I would watch this show faithfully until somebody spoilt it for me. Somebody.

I have two younger brothers (YB 1 and YB 2). The younger of the two was terrified of the Hulk. Apparently he had nightmares after watching the show. So my parents banned us from watching the Incredible Hulk. Bah!

One evening, feeling defiant, YB 1 and I sneaked out to the living room and turned on the TV. Volume turned off. My idea. My parents and YB 2 were in the master bedroom. We were counting on them not coming out for the rest of the evening.

Fifteen minutes into the show (on silent movie mode), we heard someone coming out of the master bedroom. Drat! YB 1 (coward) bolted into our bedroom. I couldn't follow suit because I was sure to bump into either my mum or my dad.

So I walked into the kitchen, took a glass of water and took a long sip. I heard footsteps approaching the kitchen. It might as well have been the Incredible Hulk. It was my dad. I swore he was wearing a green sarong.

Needless to say, I got a harsh lecture and was sent to my room in tears. It was so unfair. If the little one was scared, he shouldn't watch the show.

Though clearly upset, I didn't hold it against my little brother (now my frequent makan kaki) because I love him to bits. Well, that's old story now. 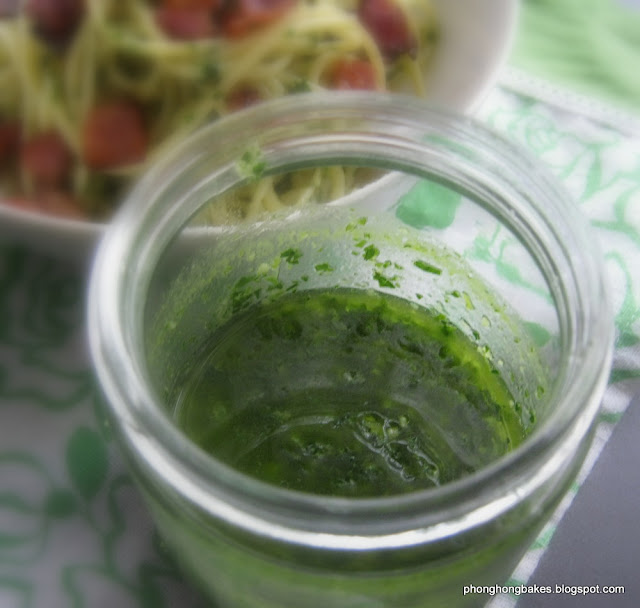 Anyway, green has always been my favorite color. And what's green and delicious? Chimichurri! I had my first taste of Chimicurri when I ordered The Rebellion at Ampersand. Though I was not thrilled with the too soft pork belly, I was delighted by the tasty greenish condiment. 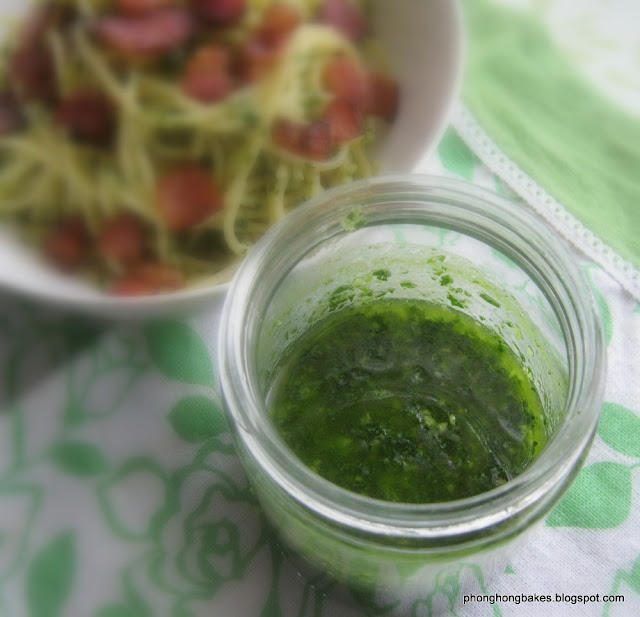 It so happened that I bought a bunch of English parsley for something but there was a change of plans. So, instead of wasting the parsley, it was used to make this Chimichurri. 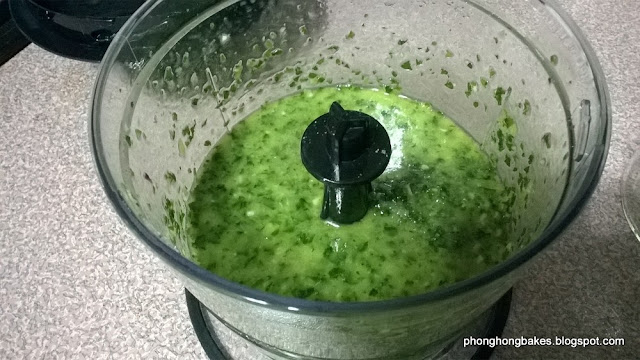 From what I read, Chimichurri is a sauce made with flat leaf parsley, garlic, olive oil and vinegar. And apparently you can customize it with whatever you please. It's so versatile too because you can eat it with meats or make it into a dressing.

So. I decided to mix it into some pasta. 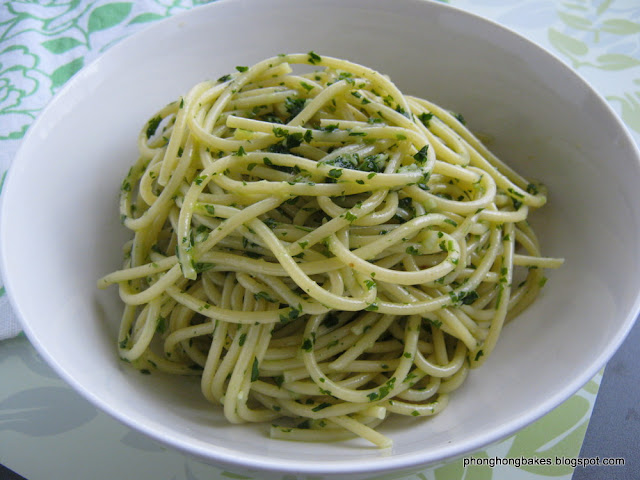 Then I thought it looked so lonesome and green. It needed pizzazz. So. 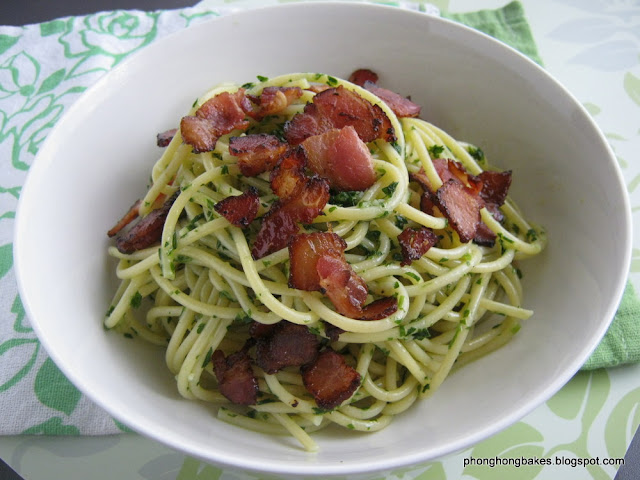 Does that look better? For sure. But seriously, even without the embellishments, the green pasta tasted awesome. 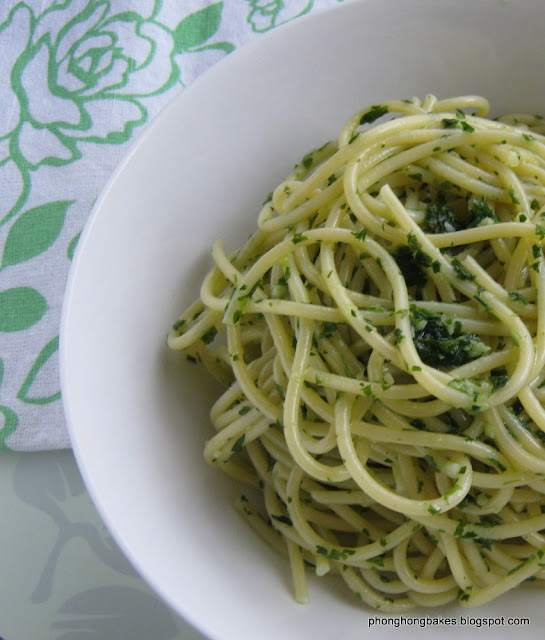 Just make sure your Chimichurri is well seasoned. Taste, taste, taste. But still, bacon brings it to nirvana status. 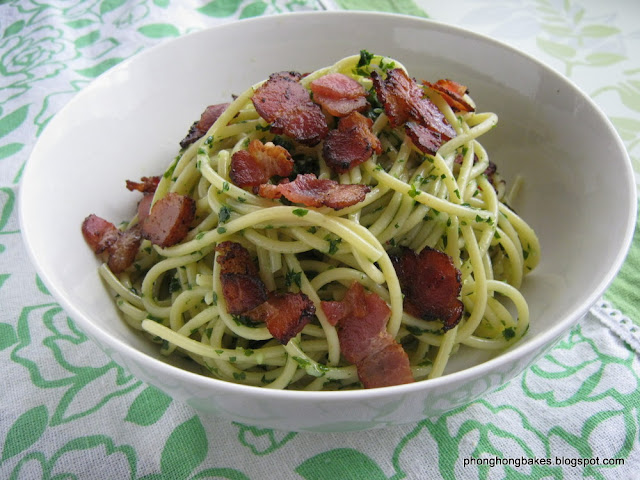 You don't have to follow an exact recipe because this sauce is pretty much what you make it to be. But a recipe gives you some idea of what proportions to use. So for best reference, go to here or you can follow my agak-agak recipe. 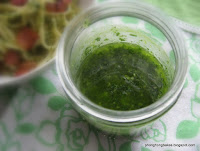 Method :
1. Put all the ingredients into a food processor or blender and blend until you get a paste.
2. Taste and adjust seasoning,
3. Store in an airtight bottle. I keep mine in the fridge.

Note : One way to use this green sauce is to toss with cooked pasta. It's delicious!! And don't forget the bacon. 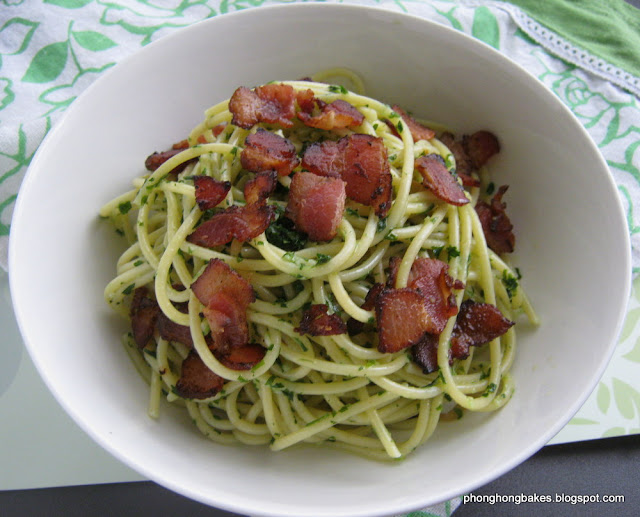