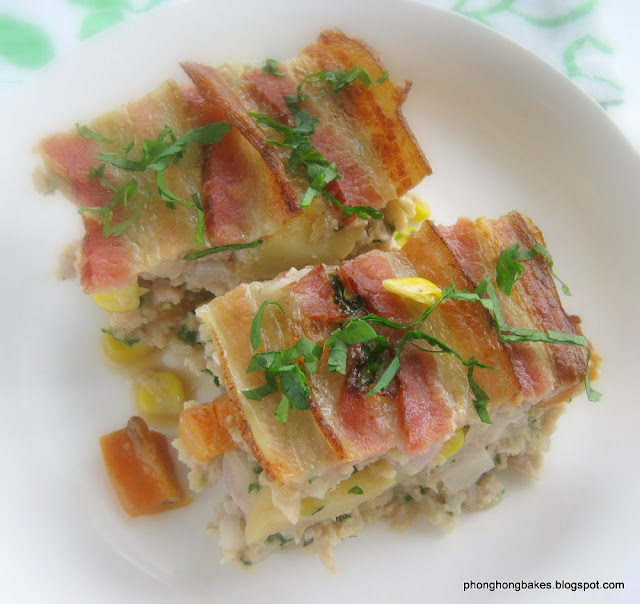 I used to be very curious about meatloaf. What is a meatloaf (besides Meatloaf the 70's rockstar)? I soon found out that meatloaf is basically minced meat baked in a loaf pan, like a cake. Ah! What a revelation.

But I never ventured to try any meatloaf recipe until recently. Why? Because the Super Porktastic Meatloaf featured in Nom Nom Paleo was topped with.......bacon! hee...hee...

Besides, it was something simple that I could make for my weekday lunch to take to office. I've improvised with the recipe because the one in the cookbook used ingredients which were not readily available to me like cremini mushrooms and frozen spinach.

It's really simple, all I had to do was use my usual ingredients for making meatballs. I mixed minced pork with chopped onions, Chinese parsley, salt and pepper. I also added a dash of garlic powder since I had a bottle in the fridge. 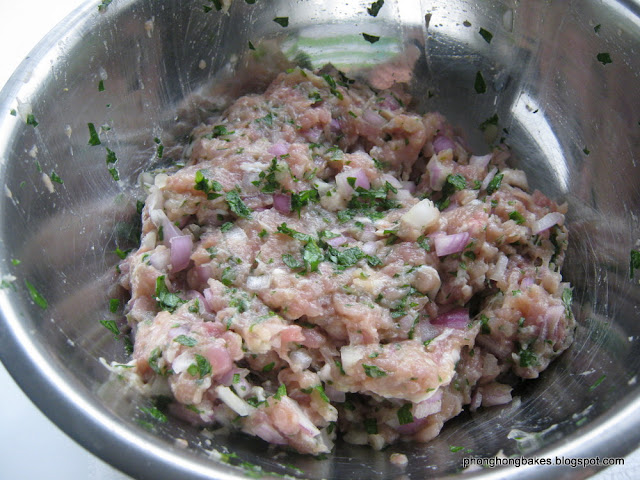 And since I had some leftover roasted vegetables - carrots, potatoes, broccoli and corn - I chucked those in as well. Then I put the mixture into a casserole dish instead of a loaf pan. 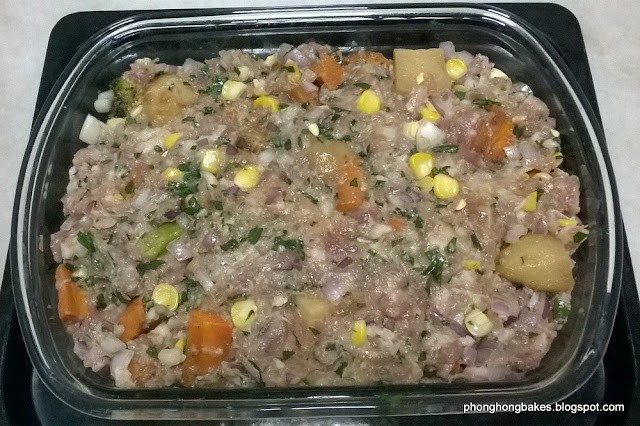 Then the piece de resistance. Bacon! 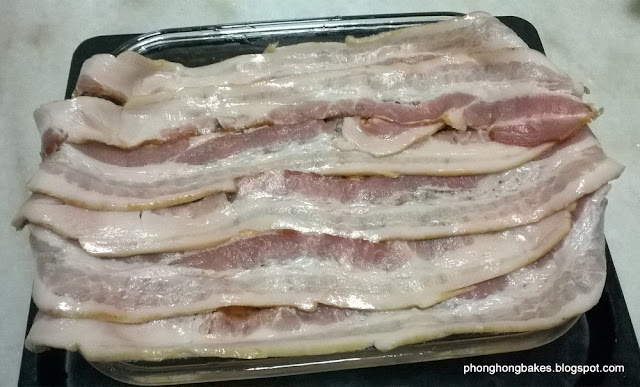 Yup, cover the top with rashers of streaky bacon. I let the bacon dangle over the casserole dish because from experience, the bacon shrinks. Here, this was an earlier attempt where I made the mistake of folding the bacon to fit the dish. 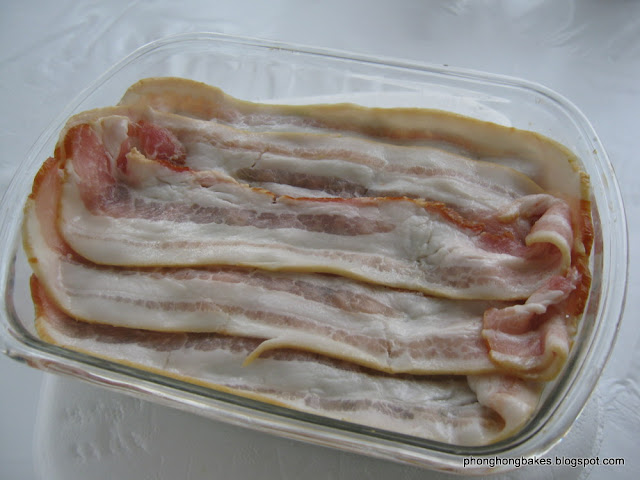 Sorry, that was just an excuse to show you more bacon. I placed the dish on a baking tray because I knew that the fat from the bacon would drip.

The the whole thing was baked in the oven at 180C for 40 minutes. From my earlier attempts, I noted that the meatloaf shrinks (like a cake) and pulls away from the sides of the dish. Not only that, there was a lot of liquids released by the meat/vegetables.

So this time, I decided to let the meatloaf cool in the oven (something I learnt from baking Japanese cheesecake hah...hah..) for about 40 minutes. Lo and behold! My meatloaf did not shrink. And not only that, whatever liquids I saw bubbling away while I was checking the dish, appeared to have been reabsorbed by the meat. So there was no liquids for me to pour away. 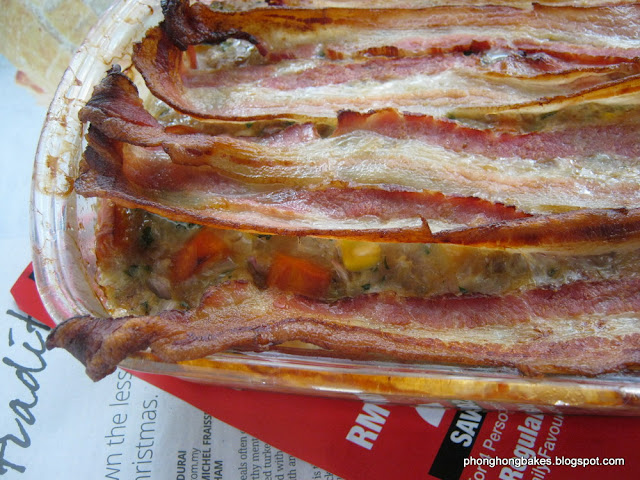 I let the meatloaf cool further before slicing into it. 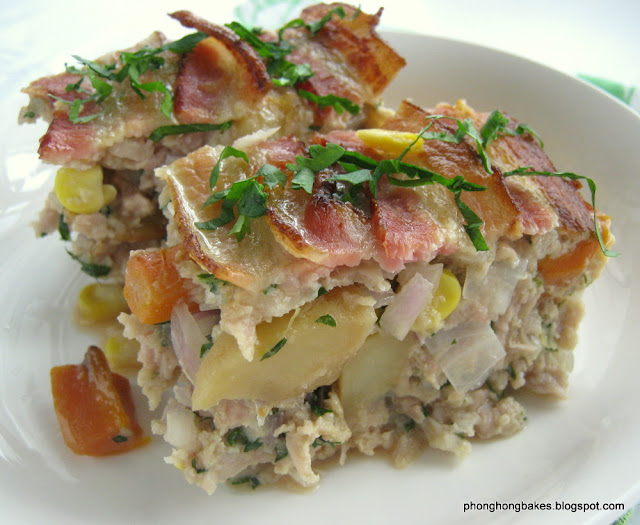 Mmmm...very tasty! Let me show you an earlier attempt.

This was baked in a loaf pan and taken out immediately after it was baked. It shrank and released a lot of liquids which I had to drain. This one, I tried to follow the recipe and used a small amount of fresh spinach (bayam) and shitake mushrooms (in place of cremini) in the filling. 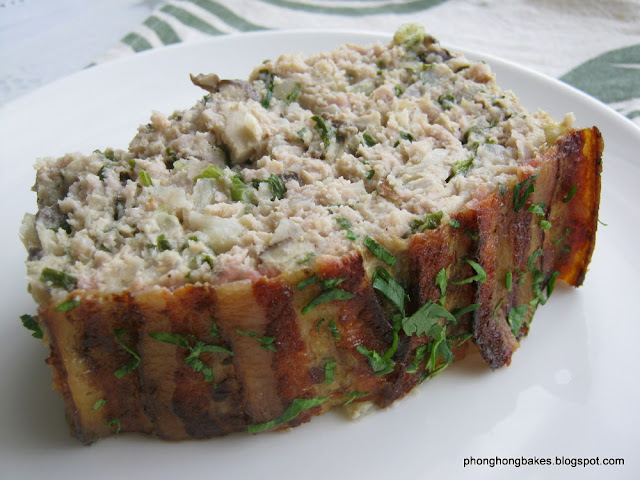 This version tasted pretty good too. I sliced the meatloaf and kept them in a container to be eaten over the next few days. 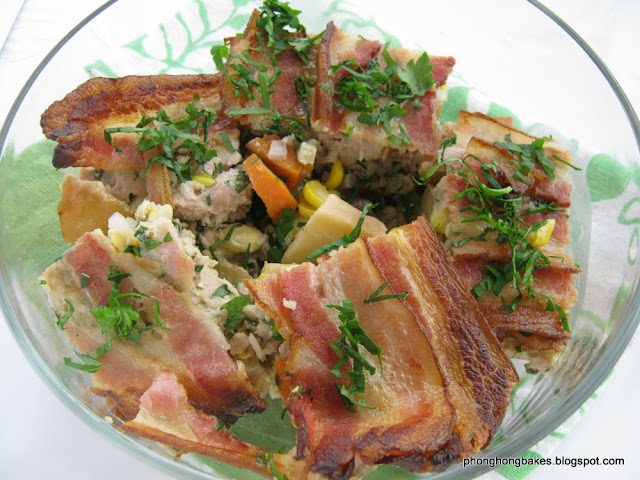 I reckon, you can also use chicken or even beef to make a meatloaf and add any ingredients that you like. Try this for an easy dish that you can make for those days when you are busy or don't want to spend too much time in the kitchen.

Method :
1. In a mixing bowl, mix the minced meat, onions, parsley salt, pepper, tapioca flour and egg.
2. Mix until all the ingredients have a sticky consistency.
3. Place the mixture into a loaf pan or a casserole dish.
4. Place the bacon on top of the mixture to cover the top entirely.
5. Bake at 180 for 40 minutes. The bacon should be browned and crisp.
6. Leave to cool in the oven for 30 minutes before removing to cool completely.

Note : I let it cool in the oven to prevent shrinking, it works for me. 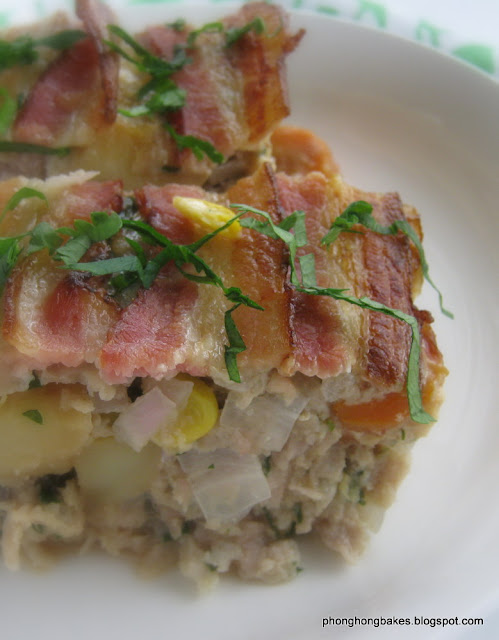