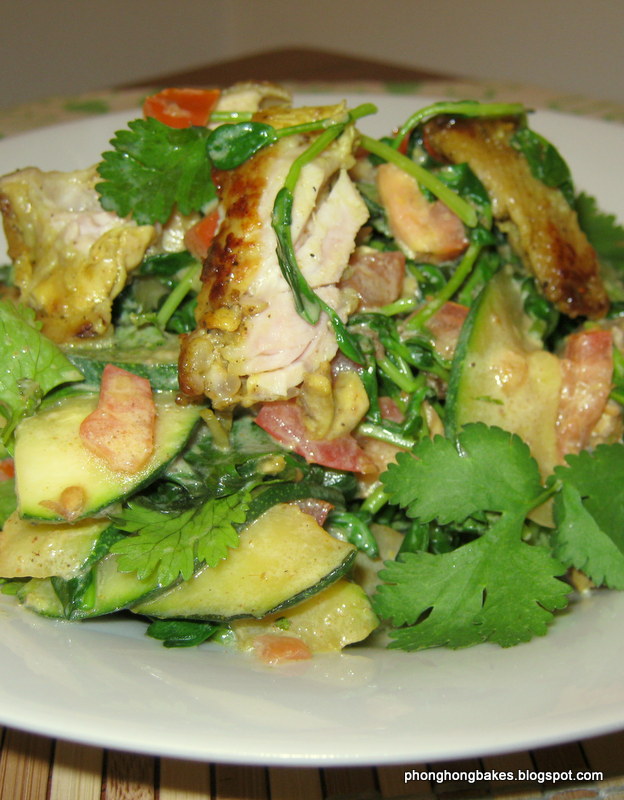 Every once in a while I try a recipe that is out of my comfort zone and occasionally discover that I don't like a particular dish. There is absolutely nothing wrong with the recipe, just that it does not suit my taste.

Take this Indian Marinated Chicken Salad as an example. Generally speaking, I dislike plain yoghurt or any dressing made with yoghurt. Except for the one time when I had a Middle Eastern salad at Tarbush Restaurant in Jalan Bukit Bintang with my auntie and brother. The salad dressing was made with yoghurt and lemon juice and it tasted quite good. 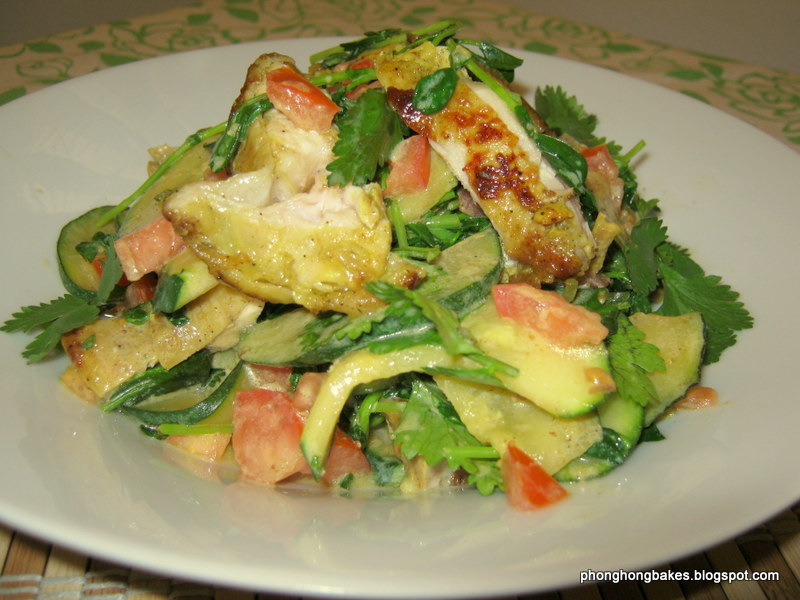 I wanted to try this Indian Marinated Chicken Salad because it sounded delicious, especially the chicken part of the deal. The dressing, I wasn't so sure but never try, never know right?

The recipe calls for watercress and I was pretty sure it is not the variety that we use to cook soup. Therefore I decided to substitute with peasprouts. I have only tasted zucchini once and though not very impressed with the taste, I wanted to give it another chance. 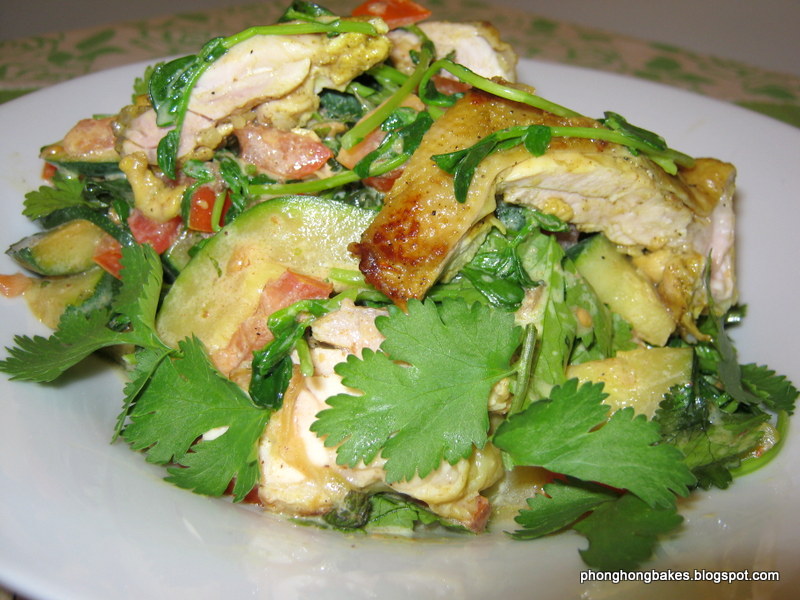 Preparation of the salad does take a bit of effort. I don't like chicken breast and opted for deboned chicken legs instead.  And yes, yours truly struggled quite a bit with the deboning. Then the chicken is marinated and later pan fried.

The dressing requires toasting and pounding of cumin and fennel seeds which wasn't that hard because I used a mill. Then it is mixed with yogurt and lemon juice. Funny thing is  that the recipe did not mention salt for seasoning for both the chicken and dressing. I guess it must have been left out and of course, I added the salt. 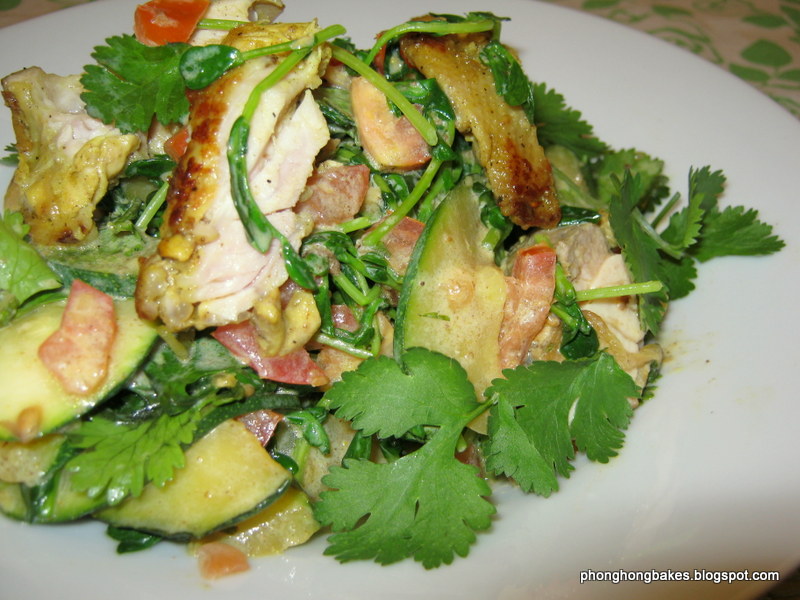 To prepare the salad, the chicken is first pan fried in a hot heavy based pan. After that, it is removed and the zucchini is fried till slightly brown and transferred to a mixing bowl. Since I don't have watercress, I proceeded to briefly fry the peasprouts as I can't accept the taste of raw peasprouts.

I sliced the chicken and tossed it into the bowl together with the zucchini, peasprouts, diced tomatoes and corriander leaves. Next up was to toss everything with the yoghurt dressing. 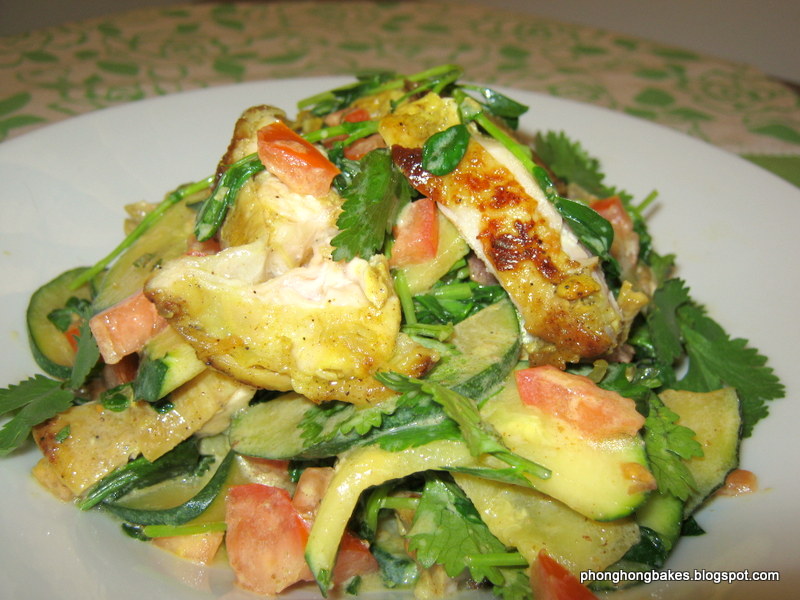 Moment of truth. Nope, I did not like the dressing. Too exotic for me. But I ate the salad anyway, not wanting to waste my ingredients and effort. All was not lost as the chicken tasted very good. Which leads me to my next post - Garam Masala Roasted Chicken. Coming soon!

There is no recipe for today as I won't share what I don't like over here. Oh well, at least now I know for sure to trust my palate. No more yoghurt based dressings for me from now on. But I must qualify myself here. I do eat Indian raita  - a simple cucumber salad with yogurt but it must be accompanied with curry for me to drown out the yoghurty taste hah! hah!