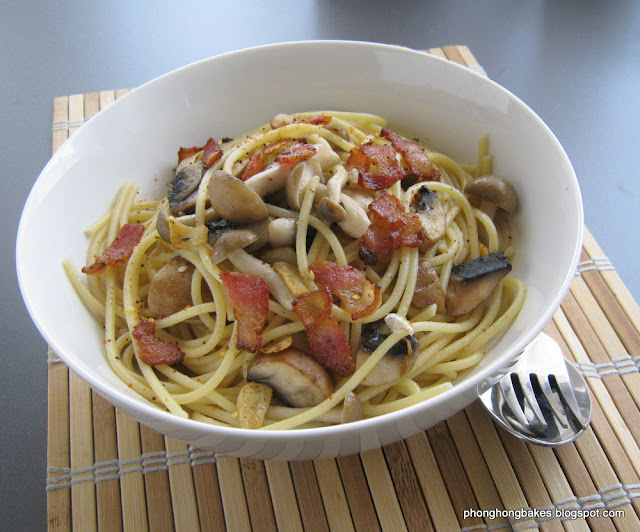 This is inspired by the one my partner and I had at Ampersand by Culinary Rebels. The first time we had it plain and yet it was so good. Then the second time, we opted to add bacon and mixed mushrooms. That made it even more awesome.

So now, I am ready to make some at home. I've heard of spaghetti aglio olio way before this and I used to wonder what it was all about. 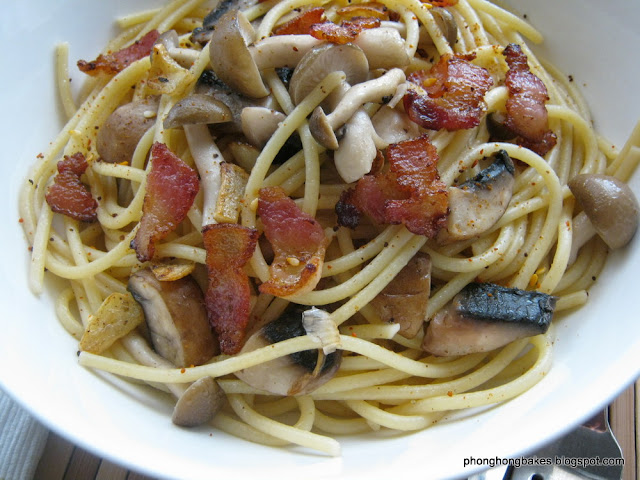 Turns out that it's basically spaghetti tossed in garlic flavored oil. My dad will tell you that it is the Italian version of mee goreng and I can't say that he is wrong.

There can be many versions of spaghetti aglio olio because you can pretty much add anything you like. The basic step is browning some sliced garlic (I like lots) with olive oil to flavor the oil and then tossing your spaghetti with it and then seasoning with salt and pepper and some chili flakes. 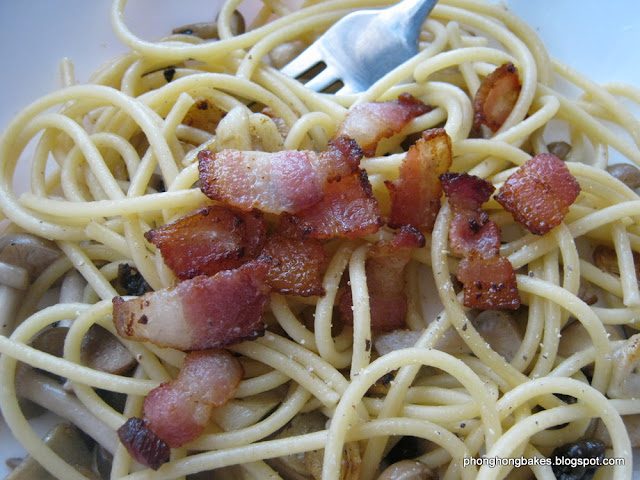 Of course I must have bacon in mine. I sliced two rashers of streaky bacon into small pieces and fried them in the pan with a some olive oil. The bacon released lots of delicious fats which were soaked up by the mushrooms. 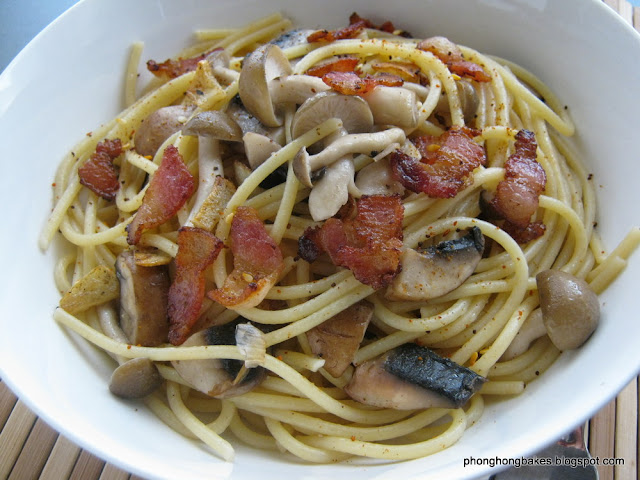 This is so delicious I tell you! I can eat this everyday if I had my way. But no, pasta goes straight to my belly and my butt. As such, I have to exercise restraint. Tsk! 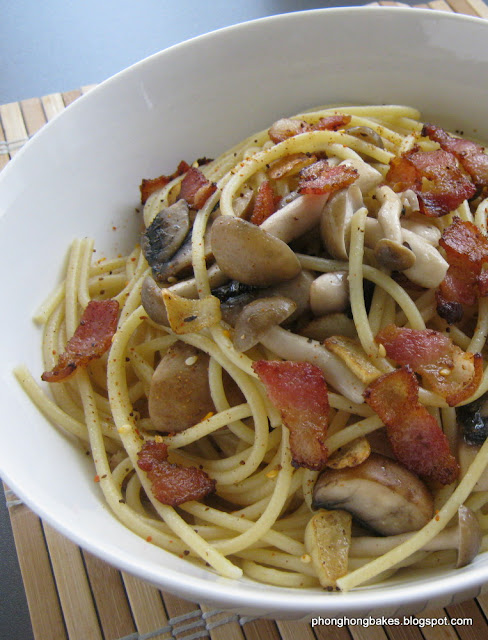 You will notice some scant sprinkling of something on my pasta. That is actually this salad seasoning which I picked up at Ralphs in LA some time ago. 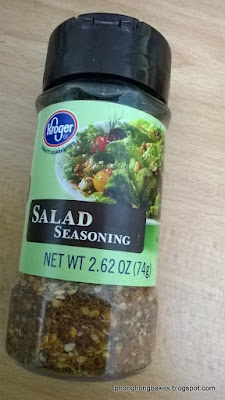 I'm afraid I don't like this seasoning because it contains cheese. Romano cheese. Smelly stuff. Ugh! I didn't read the label carefully :( 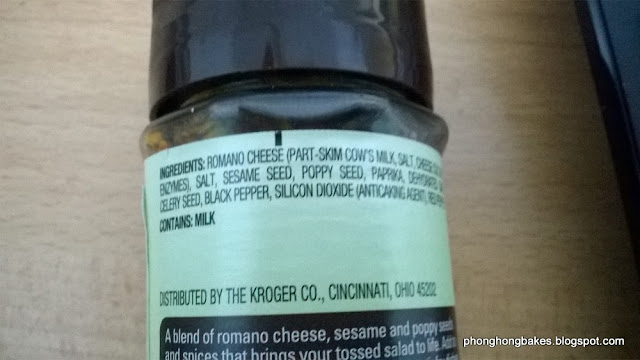 I haven't been able to bring myself to throw it away because my partner paid for it. I can waste my own money but I won't waste other people's money. 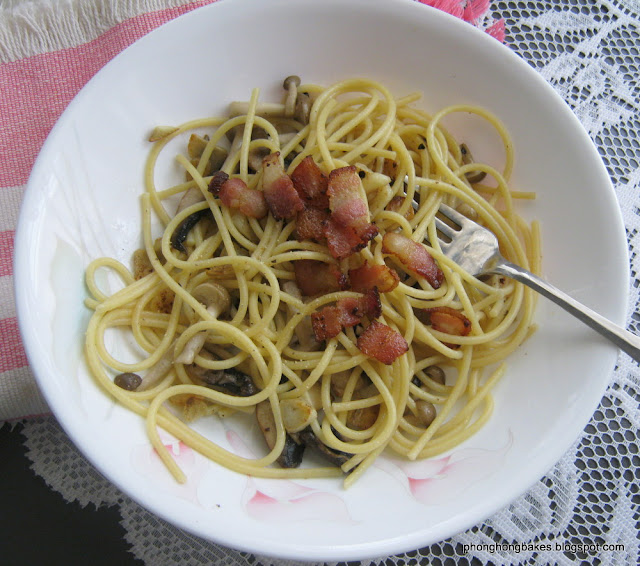 Anyway, it's still in the fridge until such time when I make something (pizza?) where I can use the seasoning and the smell of the Romano cheese will be masked by some other ingredients. 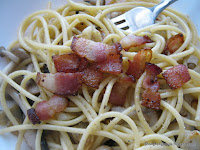 Method :
1. Heat olive oil in pan and fry bacon until browned and crispy. Remove and set aside.
2. Using the same oil, saute the garlic until lightly browned.
3. Add mushrooms and saute until mushrooms are wilted.
4. Season with salt and pepper.
5. Add spaghetti to the pan and toss.
6. Return fried bacon to the pan and mix with spaghetti and mushrooms.
7. Eat! 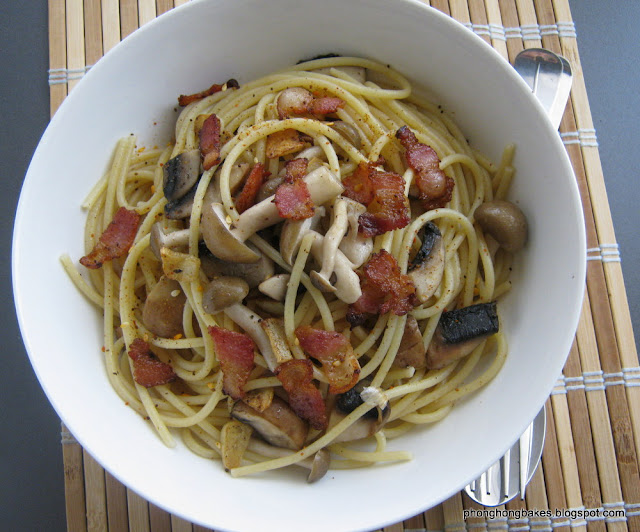