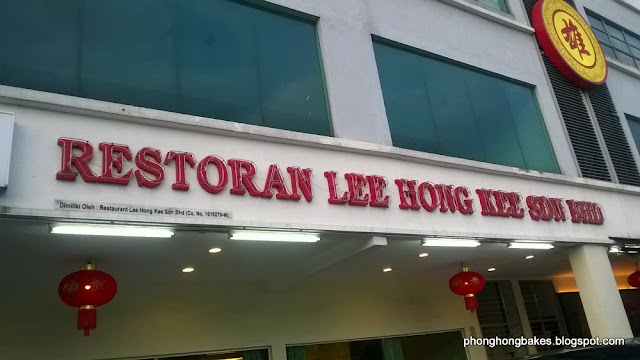 Continuing with day 2 of Chinese New Year, I stayed home on day 3 because I had an episode with my tummy hah..hah..


Day 2 dinner was held at Restoran Lee Hong Kee. My sister-in-law made the booking and I am so glad that she did. Dinner was at 7:30pm but my brother, mum and I arrived half an hour early to allow time in case we got lost hah..hah.. Dad was unwell and had to stay home.

The restaurant was packed, filled with many families having their new year dinner. 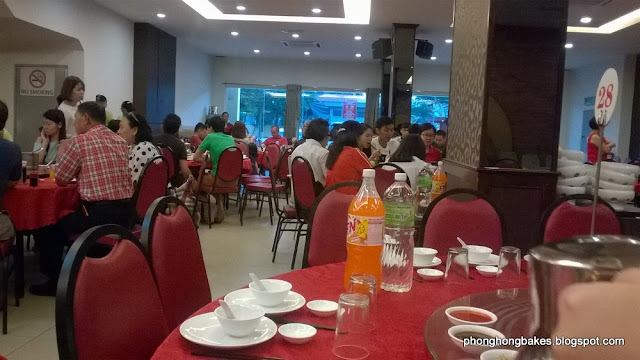 So the three of us sat and waited for my brother and his family to arrive. Once they did, my sister-in-law signaled for the server to initiate our orders. My sister-in-law chose the RM888.00 package. Very auspicious numbers, eh? 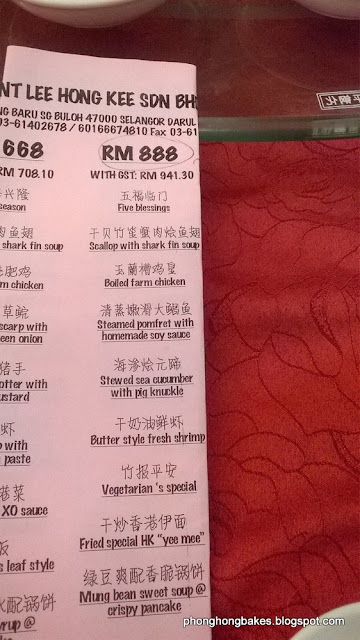 The restaurant was bustling with activity and a while later, our Five Blessings was served. 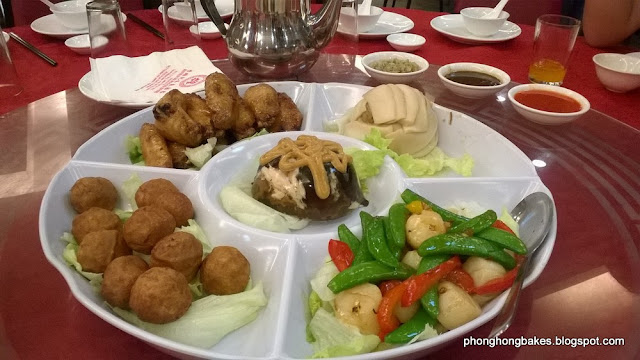 I always love the first course which consists of many items. Those meatballs had some stock encased in them and I made the mistake of biting into one and having juice squirt all over the tablecloth (on my side, thankfully). Paiseh, paiseh....

Everything on that platter was very good. That black thing in the middle is century egg plus some other goodies encased in jelly. It was topped with some sort of creamy dressing. I liked it a lot.

Next was the Scallop with Shark Fin Soup. I know. This is controversial stuff. We are not encouraged to consume sharks fin but if it is any consolation, there was very scant shark fin content in the soup. 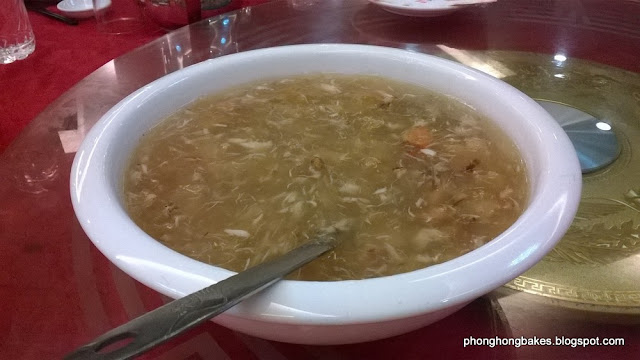 As pointed out by my young niece, there were no scallops. Instead, there was crab meat. The soup was tasty and it was quite thick and viscous. Perhaps a tad too thick in my opinion. 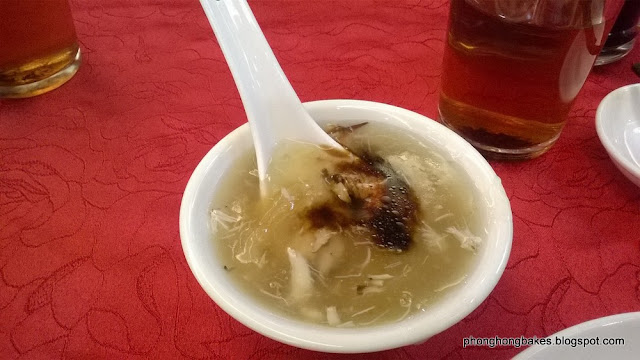 I had only one serving with black vinegar.

Next up was the Boiled Farm Chicken. This is poached Ayam Kampung and it is one of my favorite dishes. 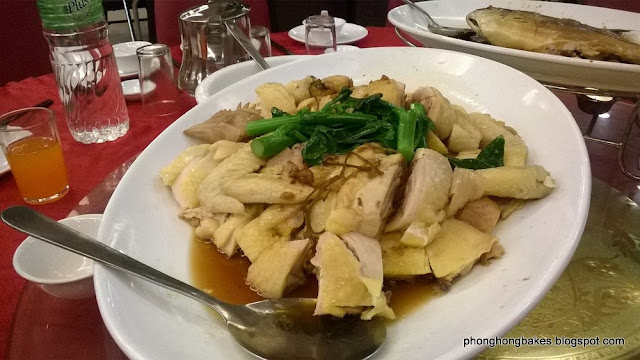 The meat was a bit tough and there was some blood too. I guess it wasn't cooked all the way through. So I did my best to avoid eating the parts that were covered with blood.

I think it was at this point that my tummy started to get upset. No, it was not due to the chicken and I am guessing that the sambal during lunch was doing me in.

I was a bit uncomfortable and I was looking for the toilet. I spotted the ladies not too far from our table. I had a lot of wind starting to build up. This is so inauspicious I tell you.

Next up was the Steamed Pomfret with Homemade Soya Sauce. To me, this was the best dish of the evening. 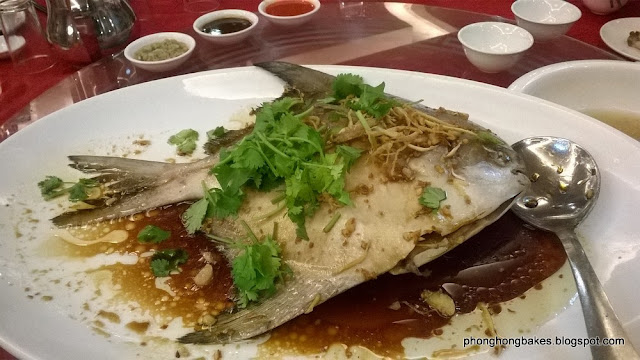 The pomfret was very fresh and steamed to perfection. The flesh was tender, moist and tasty. The soya sauce was wonderful and in spite of my troubled tummy, I kept on eating and I wished I could have the whole fish to myself hah..hah...

The next dish that came was a show stopper. How could it not be? Say hello to the Stewed Sea Cucumber with Pork Knuckle, ladies and gentlemen! 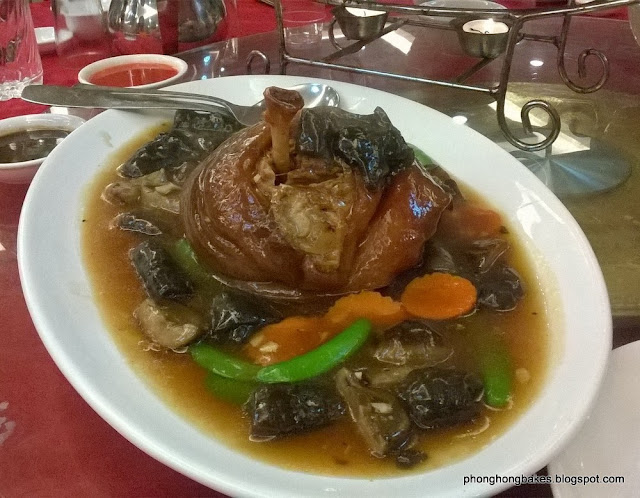 Gosh! Look at that. The meat was so tender, braised till falling off the bone. The jelly-like skin was the piece de resistance. That's mum's favorite and she went for it hah..hah.... 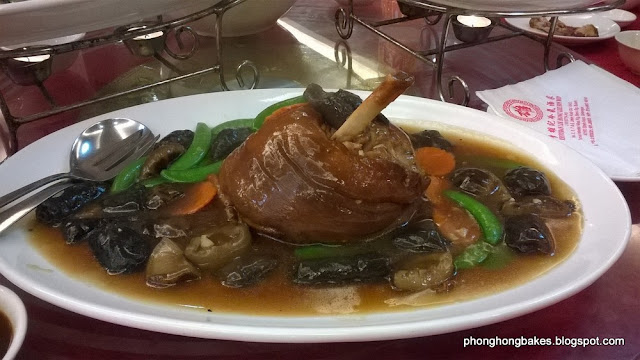 By this time, I was already quite full. But the food was just too good. So I ate some more.... 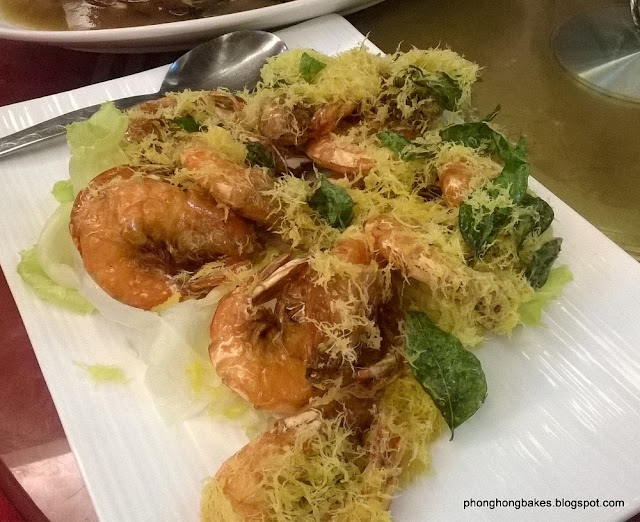 In spite of my almost full tank, I could not resist the Butter Style Fresh Shrimp. Most of us know this as Butter Prawns and it is a firm favorite of many. Though I am not much of a prawn person, I still ate two. Or was it three?

We were all splitting at the seams when this vegetable dish was served. It was the Vegetarian's Special, a dish of mixed vegetables with mock meat encased in beancurd skin and surrounded by blanched broccoli. 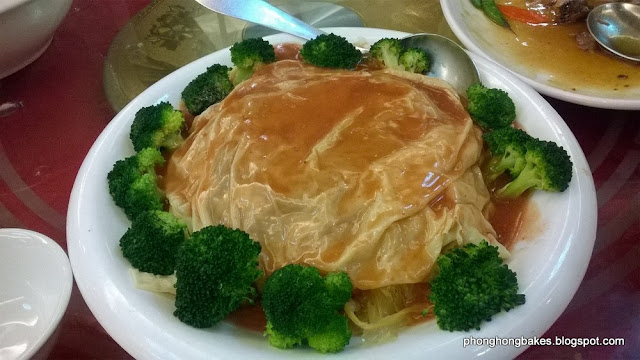 The sauce was very pungent and without a doubt, it was nam yue (fermented red beancurd). I love nam yue and I enjoyed this vegetarian dish very much. In spite of my very full tummy, I still ate with gusto.

There was quite a lot leftover because our party of 7 were very stuffed. My sister-in-law chose not to pack this home. I guess it's because leftover vegetables do not taste as good (I actually don't mind). I wished that I had asked to take it home because it was such a waste to leave this behind. But paiseh lah....

There was some more food coming our way. Wow. My perut sudah mau pecah hah..hah... 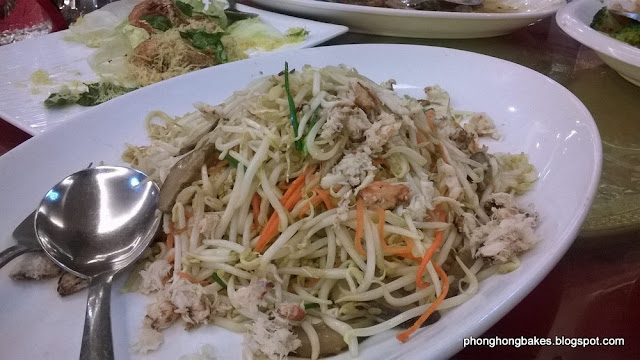 The Fried Special HK Yee Mee came looking so pale. The looks was actually very misleading because this was one heck of a fried yee mee. It was delicious! So much flavors and I could detect the smell of Chinese cooking wine. I had two servings. It was getting hard to breathe by now hah..hah..

And thankfully we came to the end of dinner with the arrival of the Mung Bean Sweet Soup and Crispy Pancake. 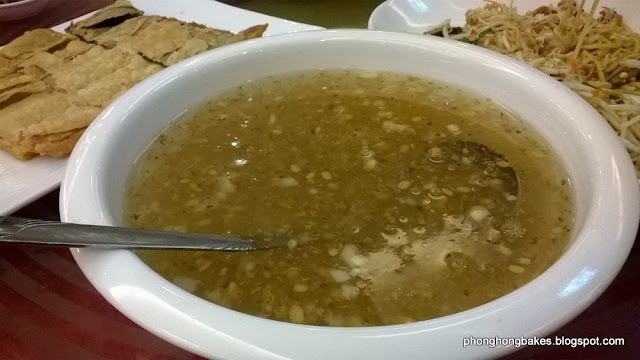 This is something that I have not had before. It was a first for the rest of the family too. The soup was not too sweet and it had a very mild flavor. I can't tell what it was, it was sort of flowery. Osmanthus? Don't know. There were also some crunchy bits in there which I am guessing is water chestnuts. 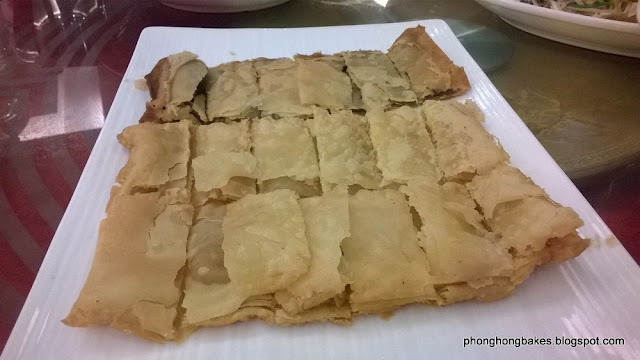 The Crispy Pancake was a hit all round. I especially liked the pieces that were over browned at the edges. There were no leftovers, this one.

The set dinner was meant for 10 persons and since we were short of 3, we could not finish all the dishes. My sister-in-law packed the leftovers (except for the vegetarian dish), so there was minimal wastage.

I enjoyed the dinner immensely in spite of my upset tummy. You must be amazed how someone could eat so much while experiencing tummy ache. Well, this is Phong Hong for you :D 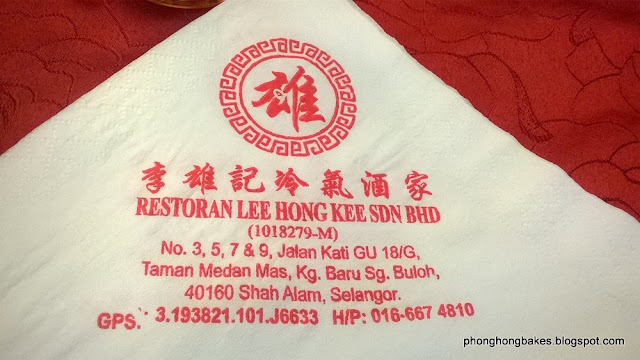