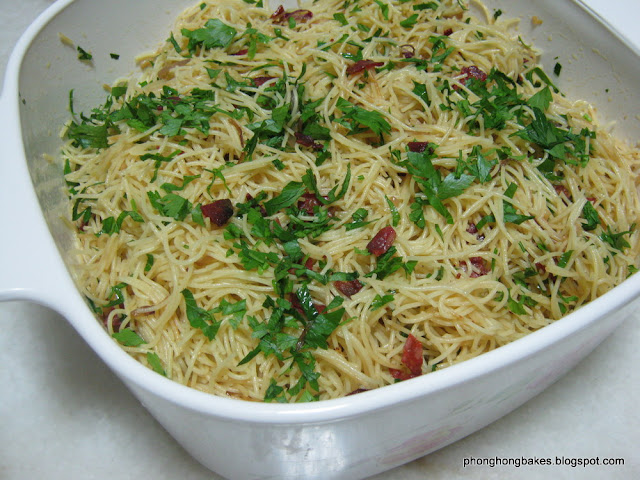 Today is the first day of new year and I was still in a coma when the alarm went off at 4:00am. I am very sure there were firecrackers going off past midnight but I was dead to the world. In years past, I used to curse those revelers for disturbing my sleep but not this year.


When I finally woke up (at 5:30am) I went to the kitchen to take out the minced pork that was defrosting in the fridge. I also took out the baked potatoes which I made and froze in advance a week ago. I was going to make meatloaf to serve with pasta and salad. 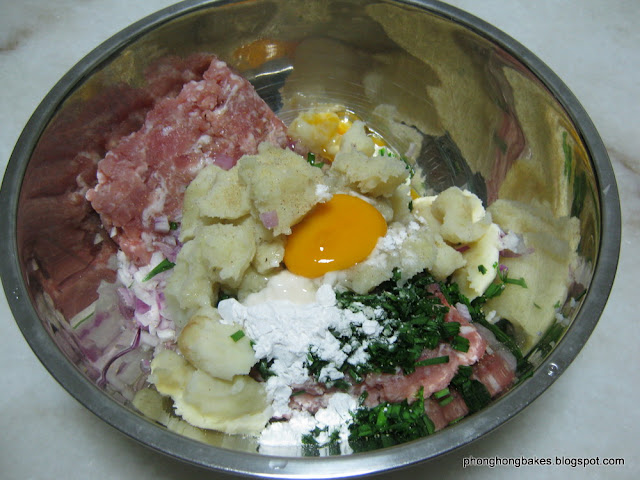 It was rather therapeutic mixing the ingredients by hand. Then I placed the whole lot into the corningware which I used the night before to house my lousy Ayam Masak Merah. 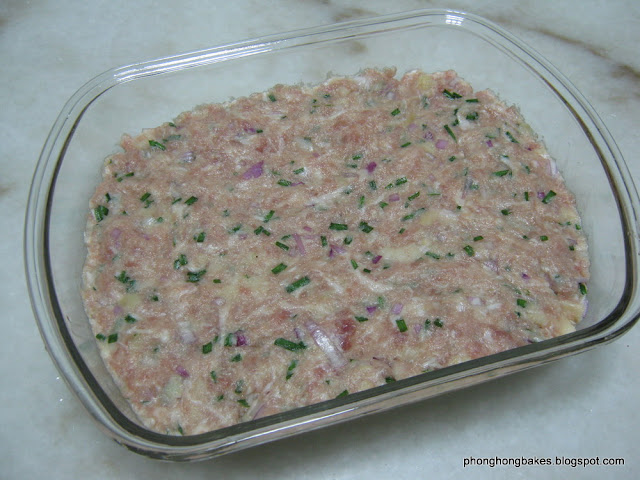 Then I topped it off with bacon and I knew that would get the nod of approval from the clan. 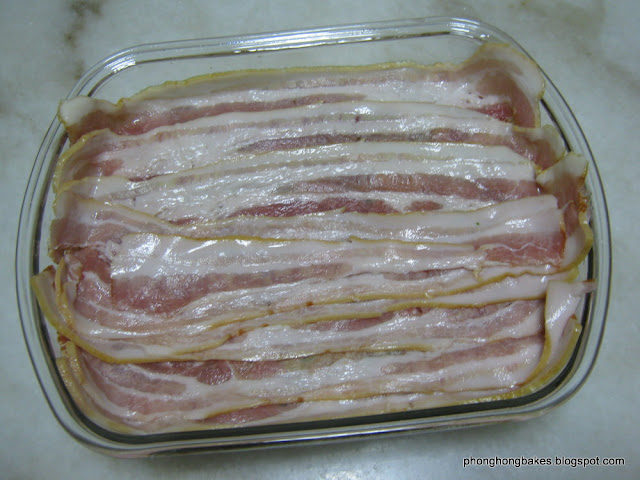 While the meatloaf was baking, I fried some sliced chorizo for the pasta. I bought the chorizo on a whim a few months back and it had been sitting in the freezer. 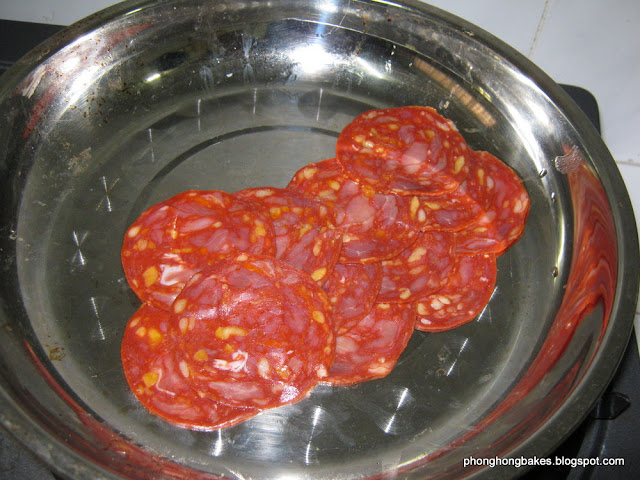 I took a sniff at it and it did not smell that good. But it's all I had and I took a chance. 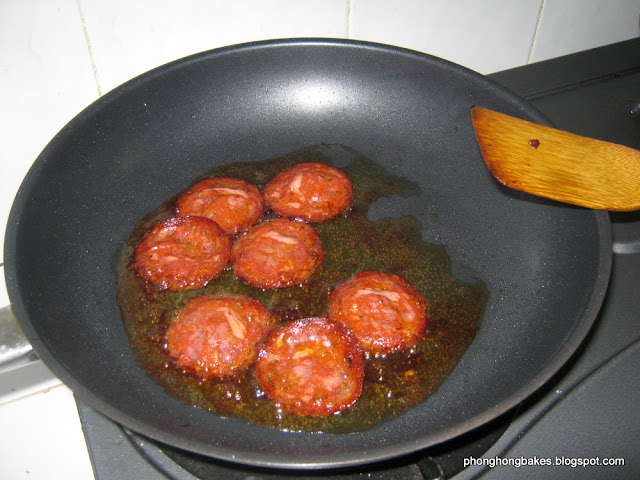 Well, it became wonderful after it was fried. I must stock up some more.

After that was done, I sauteed some onions and garlic to mix together with the pasta.

This is where I censor what happened next (no photos). I have a confession to make. Phong Hong can't cook pasta. I mean, she can but she does not do it well. I had two packets of Angel Hair pasta and it was quite naive of me to think that I had to cook both so that there will be enough to go around. My clan, we are big eaters.

So I boiled a huge pot of water and dumped both packets of pasta into the water. Angel Hair pasta cooks very fast, the package instruction said 2 minutes but it was not done by then. It took me slightly more than 3 minutes.

I drained the pasta and that's when I realized that two packets is a huge amount. Some of the pasta got stuck to the bottom of the pot and the ones in the colander were sticking to each other. It was a nightmare. I was out of my comfort zone.

I poured half into the large corningware and poured the sauteed onions/garlic into the pasta and tried to toss it. The oil was not enough so I added more olive oil. Mix, mix, mix. Then I added the fried chorizo which I had cut into smaller pieces.

Obviously, there wasn't enough chorizo but I continued to toss. I also added some Italian flat leaf parsley to make it pretty. I then seasoned the pasta with salt and pepper because it was grossly under-seasoned (the chorizo oil was quite salty but there wasn't enough of it). Never mind. I will just leave salt and pepper on the dining table for my guests to do their own seasoning.

By that time, the other half of the pasta was all clumpy in the colander. So I threw it away. What a waste.

Then my made the salad dressing. I made a honey mustard dressing ala Salad Shack. 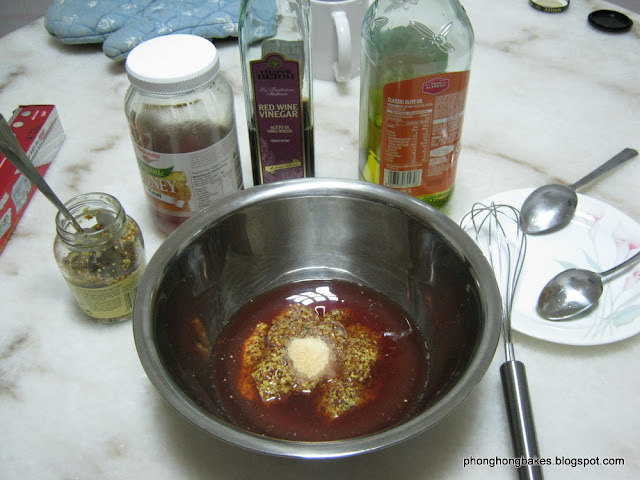 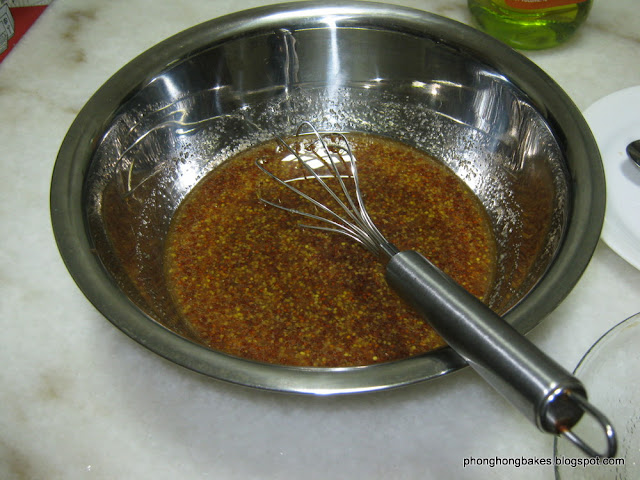 Drat! I forgot to snap a pic of the salad. Or the three dishes on the dining table.

Well, I am happy to say that the meatloaf and salad was very well received with a seal of approval from the matriarch of the clan. The pasta? hah...hah... YB1 (younger brother no. 1) gave me some pointers which I will take note when I cook pasta. Pasta is more his domain and my sister-in-law told me that he has declared his kitchen closed for the whole week. Tomorrow my kitchen is closed hah...hah...