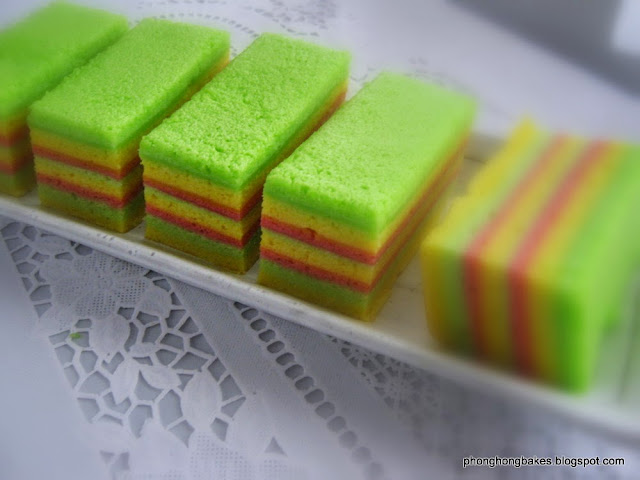 
But one day while rummaging through my freezer, I found these. 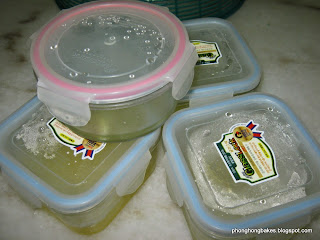 Alamak! No wonder lah I couldn't find my containers. All along they were in the freezer. Doing what? Housing frozen egg whites. And these were not all. I found a few more. In case you are wondering, these egg whites came about due to recipes which require only egg yolks or more egg yolks than egg whites. Not one to waste, I kept the unused egg whites. 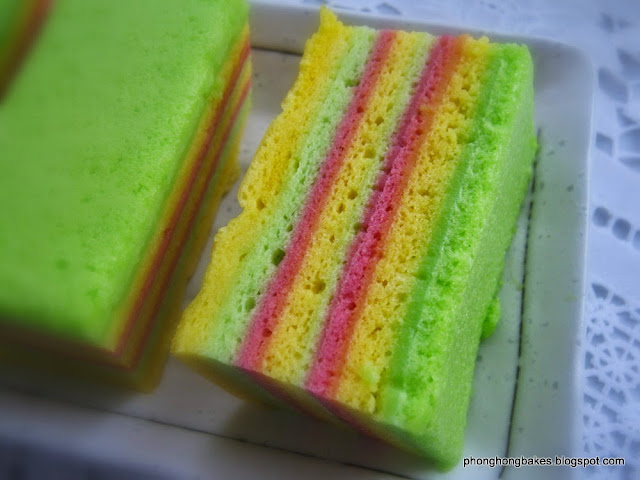 A few days prior, I spotted a recipe for Egg White Layer Cake in the cookbook Thinking Out of the Shell. The recipes calls for 12 egg whites. But I had no idea how many egg whites I had. Some containers could have contained only one while others may have two or three or four. That's when I realized that recipes that call for eggs by weight rather than number would have been helpful in this instance. Yes, I admit I hate those recipes because I always think "Who the heck weighs eggs???" and I wish they would say how many eggs instead. But now I know. Sorry for being a hater. 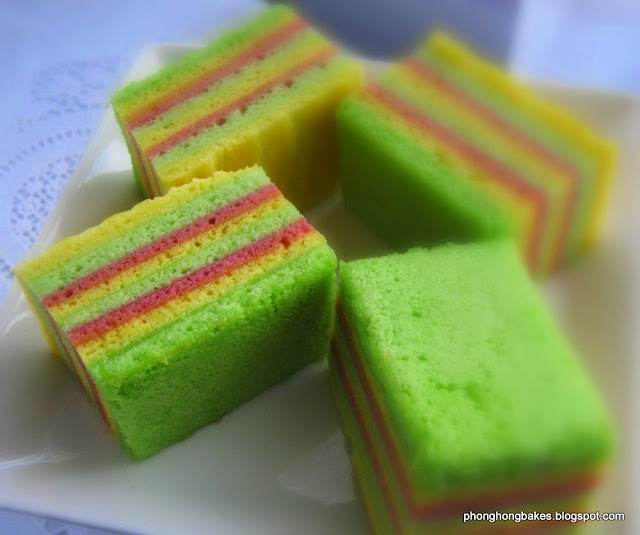 So I had to take a chance and I used my astounding perceptive skills to guess that all my egg whites, when added together made up 12 eggs whites hah..hah..hah... Yeah, genius auntie. Genius!

The recipe appeared simple but when I read the method, I knew that this one (just like the previous recipe I attempted) also requires you to have some prior knowledge/basic instincts about preparing the batter. But never mind. I was feeling brave and reckless. 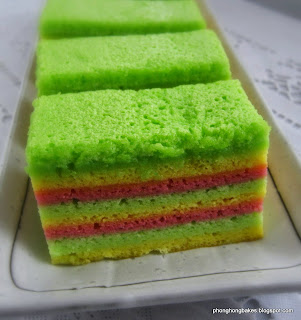 I went ahead and whisked the whole lot of egg whites. The recipe said to beat to medium peaks and I had no idea what that was. I only know soft peaks and stiff peaks. So I guessed that medium must be somewhere in between. Yeah. Another spot of genius. The mixture beat up to quite a poofy volume and that's when I realised I might have more than 12 egg whites. But I was fearless, remember? So I trooped on. 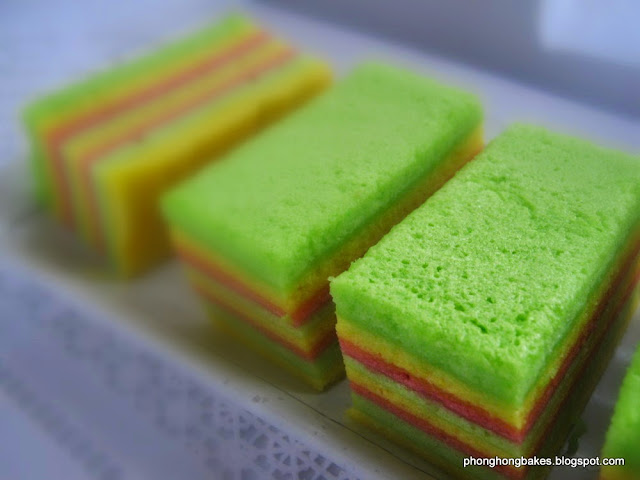 Then it said - add coconut milk, salt, sifted flour and baking powder. Lastly fold in melted butter and vanilla essence. Sounds easy and straightforward right? But do you add all that while beating the egg whites or do you fold it in using a spatula? Since my mixing bowl was 95% full, I decided to fold the rest of the ingredients using a spatula.

After all that was done, I had to divide the batter into three equal portions as the layers are made with 3 colours - red, yellow and green. The professionals and the more meticulous among home bakers would weigh the batter to make sure that they get 3 equal portions. But not this auntie. Again. Genius. I eyeballed the amounts. 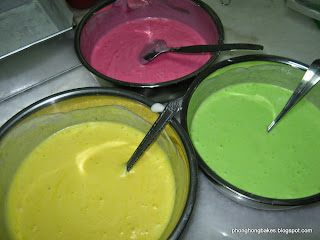 Once the batter is in place, you had to ladle the batter to make a thin layer and bake the cake layer by layer. Again, the proper thing to do is to use a ladle and measure how many ladles make up a layer. But you know me, right? hee..hee... So there I was layering and baking, running in and out of the kitchen every 8 minutes or so. I was quite clumsy and spilled my batter. I even managed to spill some on the cookbook. 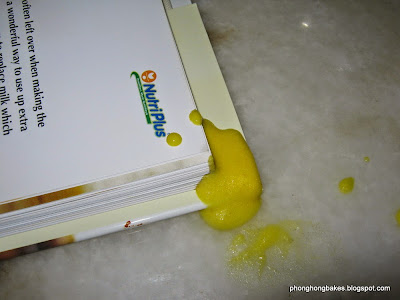 I ran out of yellow batter and had to make do with just red and green. My bohemian methods were not so genius after all. But hey, I had enough batter to work with so maybe, just maybe there were 12 egg whites in there after all. 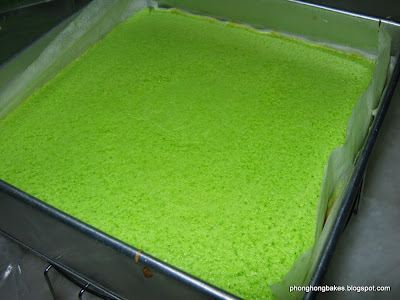 Finally, I finished with the green layer. It was not that bad after all. I think after this I can attempt a kueh lapis. Now, the moment of truth. Did I get my layers right? Yes, I did though they were not even. And most important of all, did the cake taste good? 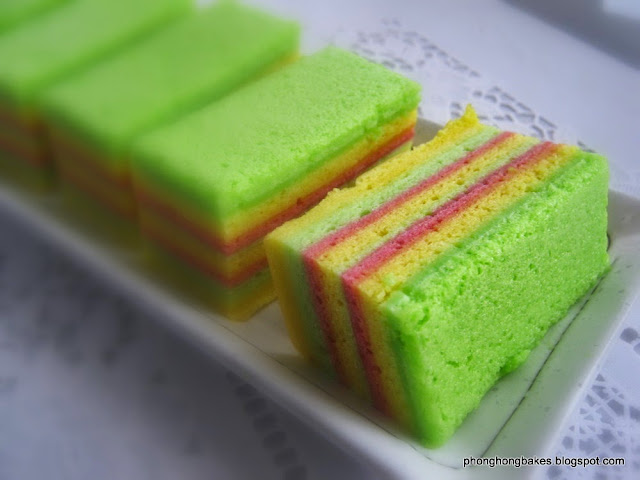 The cake has a springy rubbery texture. I think I may have overbaked it or overmixed the batter. I expect that this cake should have a sponge-cake like texture, no? I really don't know because I have never eaten this cake before. The sweetness of the cake is just nice because I reduced the sugar but I recommend that you follow the original amount. It should have a sweeter taste. If possible, use fresh santan because I found that the packet one does not have enough aroma. With the benefit of hindsight, instead of butter, I could have used coconut oil instead. That would have given me a better coconut aroma. 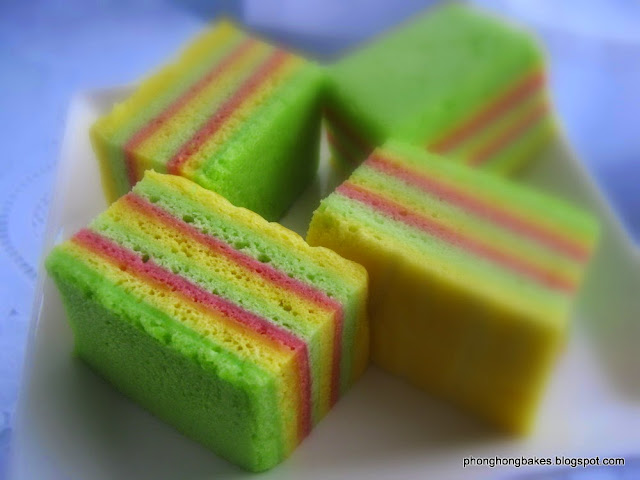 Though I was not happy with the taste and texture of this cake, I was glad that I baked it because now I know what it is like to bake a layer cake. Consider this a trial run to my impending Kueh Lapis Legit. Yeah! 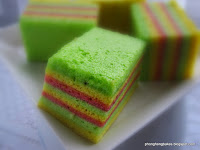 Egg White Layer Cake
Recipe source : Thinking Out of the Shell (page 57)
(My notes and adaptations in red)

Method :
1. Whisk egg whites and cream of tartar until frothy, gradually add in castor sugar and continue whisking to medium peaks.
2. Add in coconut milk, salt, sifted low protein flour and baking powder. Lastly fold in melted butter and vanilla essence.
3. Divide egg white mixture into three portions and mix three different colors into each portion.
4. Preheat oven to 180C (I used 160C), pour first layer of batter into a pan lined with parchment paper (I used an 8" x 8" square pan lined with baking paper). Bake for 5-8 minutes or until cooked (I baked for 8 minutes).
5. For the second layer, increase temperature to 200C (I used 180C), pour in batter and bake for 5-8 minutes (Mine took slightly more than 5 minutes. You have to keep checking and not overbake).
6. Alternate the batter with different colors until you reach the last layer, decrease temperature to 180C (I used 160C) and bake for 15 minutes. 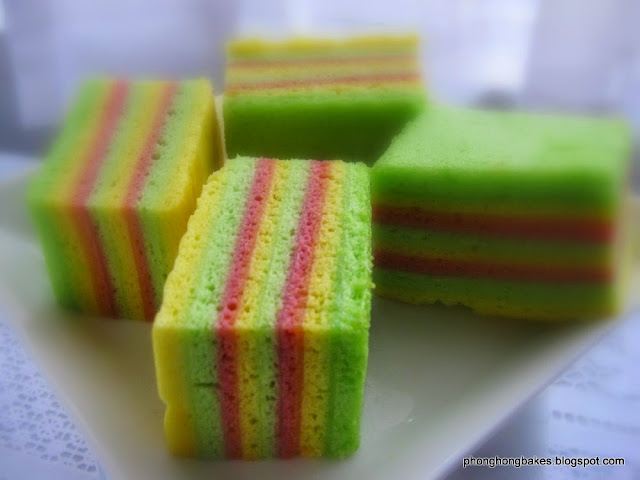 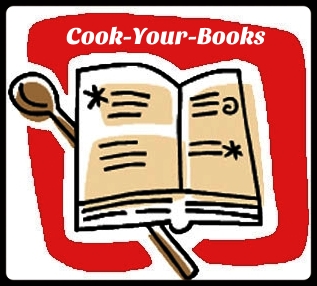 This post is also linked to Cook-Your-Books #23 hosted by Joyce of Kitchen Flavours.
Posted by PH at 08:13