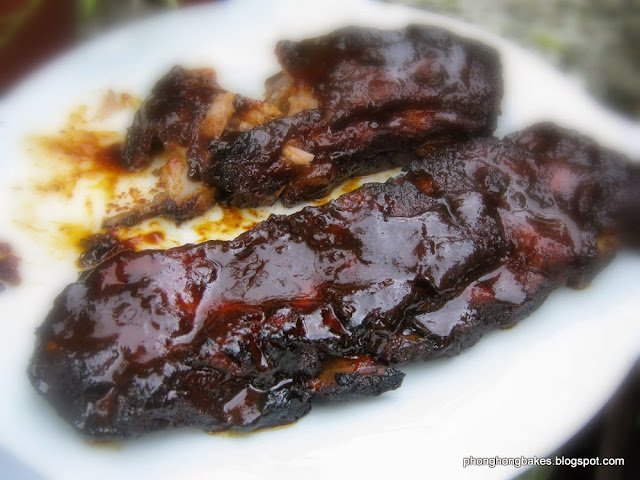 When I saw this recipe on The Domestic Goddess Wannabe, I told myself that I simply had to try it. But please excuse my messy presentation. There is an explanation for it.

It was a gloomy Sunday - the sort of day that is a nightmare for food bloggers. Why? Because there is not enough light to take decent photos. This was how it looked like when I took my first few shots.

I cannot turn off the flash on my point and shoot camera because it will give me a camera shake message and the picture will be blurred. With flash, the photos come out butt ugly. I decided not to post the ribs. Then I took a bite. Holy cow! This BBQ ribs is seriously good! It can give any restaurant a run for their money. Seriously. 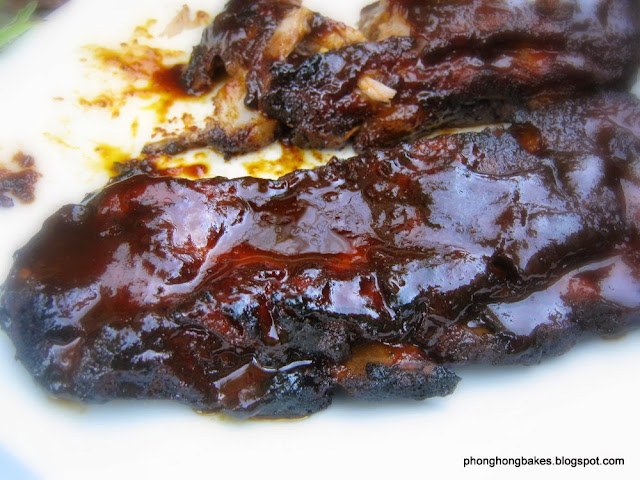 So how could I not share this? That's when I decided to do my shots outside. It was bright enough though cloudy. I took my camera outside and did a test shot. Then I took my platter of ribs to my garden to be photographed amongst my weeds. I simply had to show you how magnificent it was. You may not be able to taste it but you must see how good it looks. 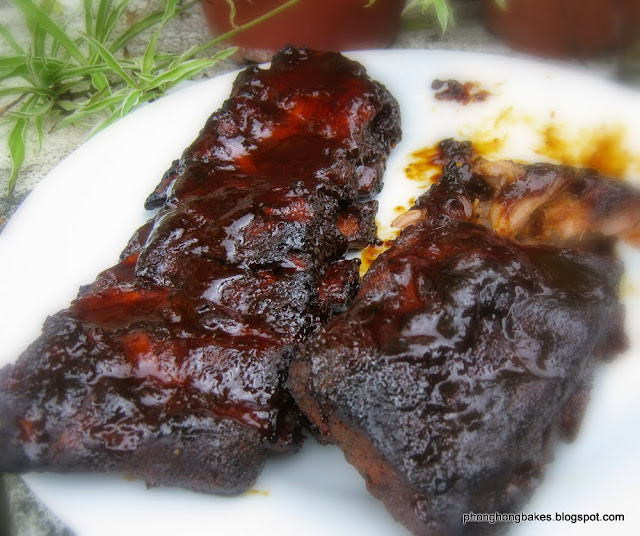 Before I took my ribs out, I took a peep to make sure the neighbors were not around hah..hah.. They will think I am mad. Anyway, the coast was clear and I happily snapped away. But my platter was already messed up due to me digging in earlier. Never mind. This is real food and real food is messy. Agree? 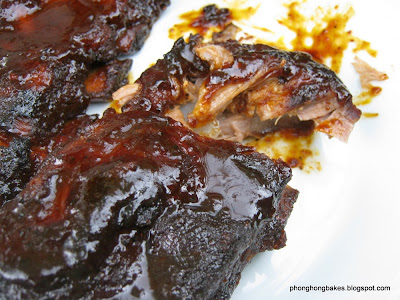 Now let me share with you how to make this ridiculously easy and fantastic ribs. But before that, let me introduce you to the BBQ sauce that I used. Stockyard Memphis Red BBQ Sauce. I bought it quite a while ago and it has been sitting in my pantry. It cost me a small fortune but it was totally worth it. 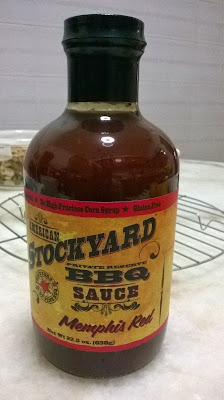 First, get your ribs. I bought mine from the pork shop at Tesco. The Aeon pork shop does not sell a whole rack of ribs. Theirs is all chopped up. That will not do. Next, make a dry rub to marinate the ribs. Do this preferably the day before. The next day, take the ribs out to come to room temperature. Then put them into the slow cooker like this and pour BBQ sauce over the ribs. Just one cup will do. 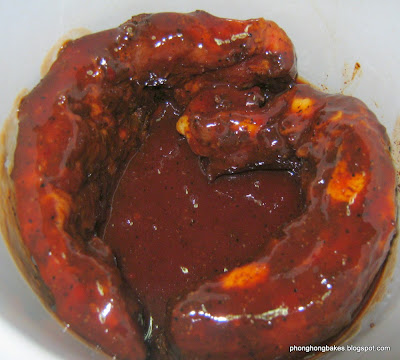 Then cover the ribs with baking paper. This is to minimize loss of moisture. I really want to give Diana a very big hug right now for sharing this awesome recipe. 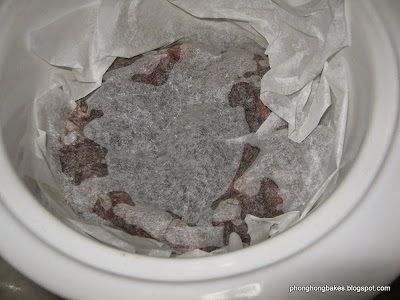 Then cover with the lid and turn on your slow cooker to high and leave to cook for 3-3.5 hours. Test the ribs by poking it with a fork and if the meat is tender, you are done. Mine was done after 2.5 hours. 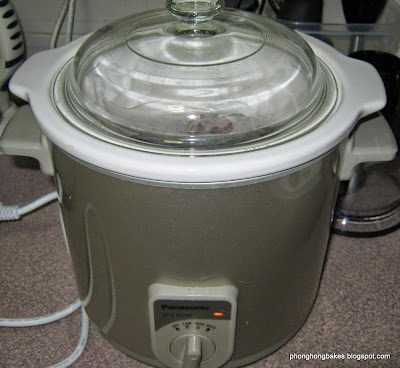 The ribs are quite fragile at this point as the meat is falling off the bone. So remove them from the cooker carefully and lay them on a lined baking tray. Brush with the remaining BBQ sauce from the cooker and grill in the oven at high heat for about 10-15 mins until the edges are caramelized. 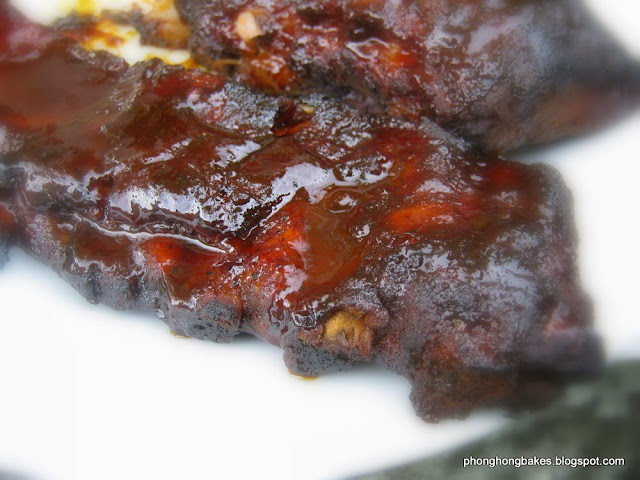 You know, I think these ribs taste a lot better than the ones I have eaten at the restaurants so far. It's a lot cheaper too compared to what I pay outside. If you love ribs, you must try this recipe. Make sure that you get good quality BBQ sauce and you won't go wrong. 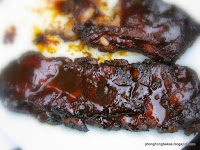 BBQ Sauce :
1 cup of Stockyard Red Memphis BBQ Sauce (or any brand of your choice)

Method :
1. Mix all the dry rub ingredients together.
2. Rub the mixture all over the ribs.
3. Place the marinated ribs into a freezer bag and keep in the fridge to marinate overnight.
4. The next day, bring the ribs out to room temperature.
5. Put the ribs into the slow cooker in a vertical position, ie propped against the sides of the cooker.
6. Pour BBQ sauce all over the ribs and place a piece of baking paper over the ribs to cover them.
7. Cover with lid and cook on high for 2-2.5 hours (test for doneness by poking the meat using a fork)
8. Once tender, carefully remove the ribs and place them on a lined baking tray.
9. Baste the ribs with the remaining BBQ sauce from the slow cooker.
10. Grill at 200C in the oven for about 10-15 minutes until the edges are caramelized.
11. Serve with extra BBQ sauce. 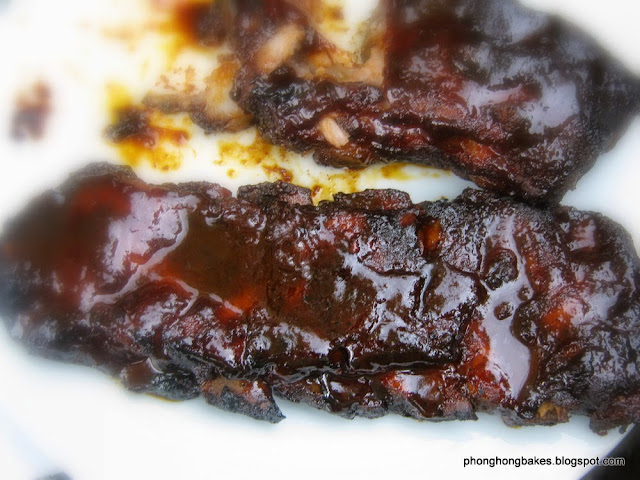