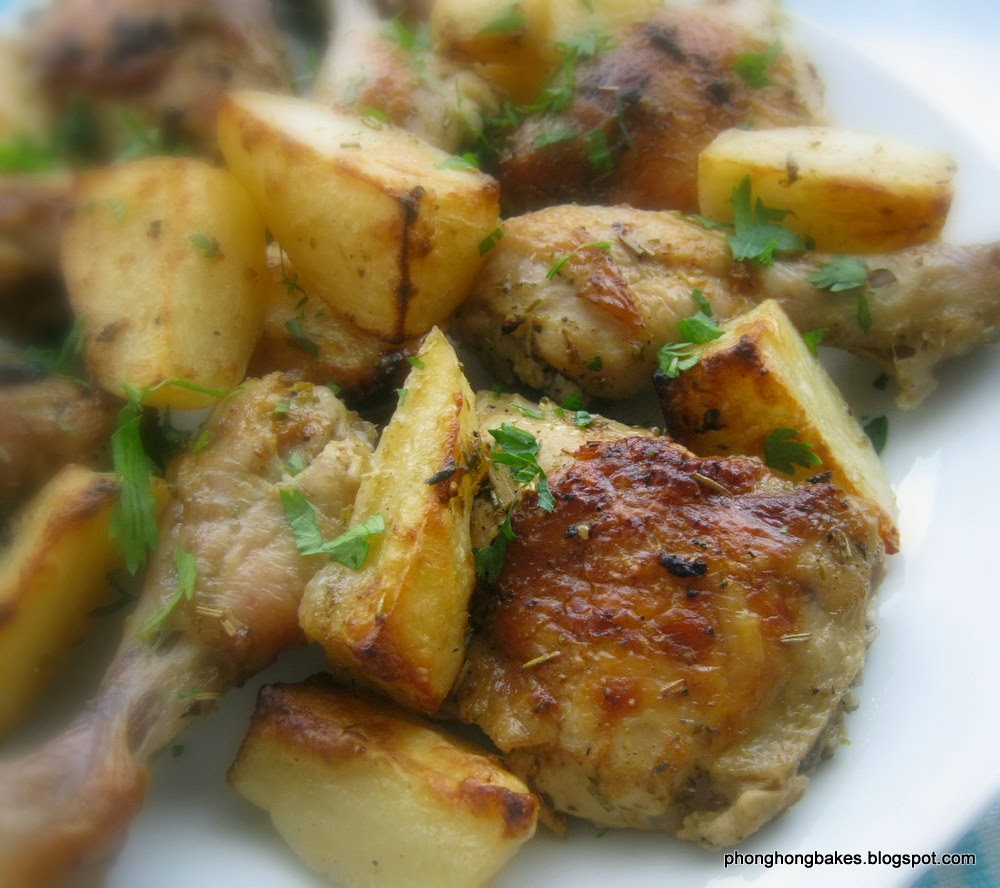 When life hands you lemons, instead of lemonade you can make roasted chicken. Or lemon cheesecake. Since I have gone back on the low carb diet trail, roasted chicken it was. Or more specifically, Greek Lemon Chicken and Potatoes. Oops! Potatoes? Those are carbs aren't they? Let's pretend they are not hee..hee..hee.... 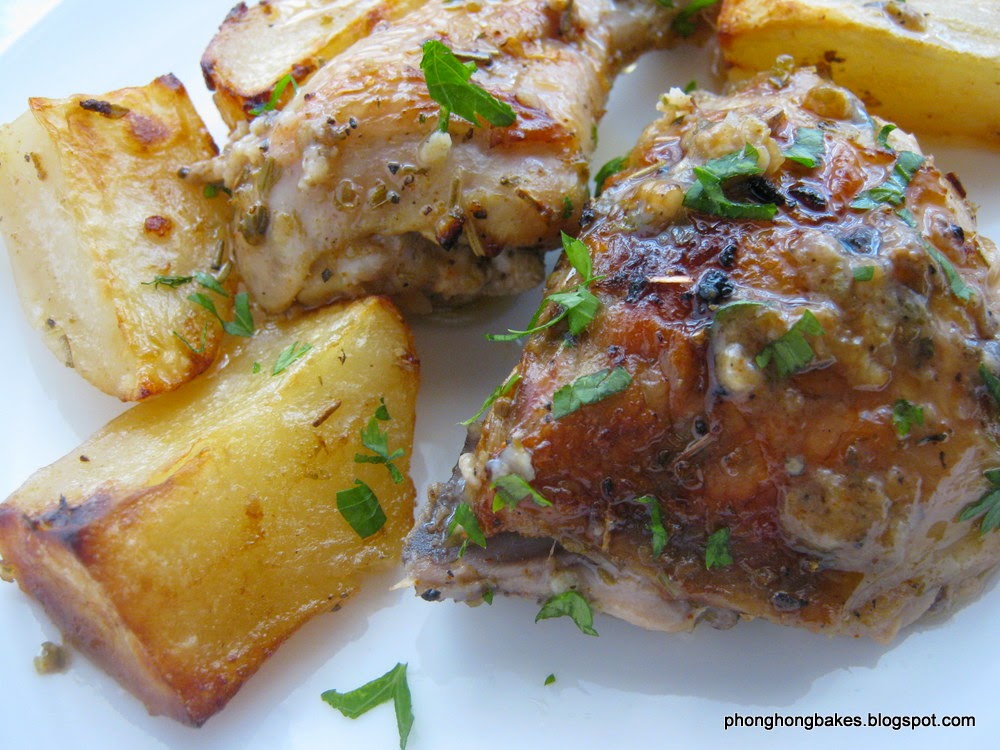 I found some lemons in the fridge and one had gone bad. Haiz! Must not waste lemons as they don't come cheap in this part of the world. So I have to find ways to use my precious lemons. And then there's the dried herbs that I need to use up. So this recipe from Food Wishes could not have come at a better time. 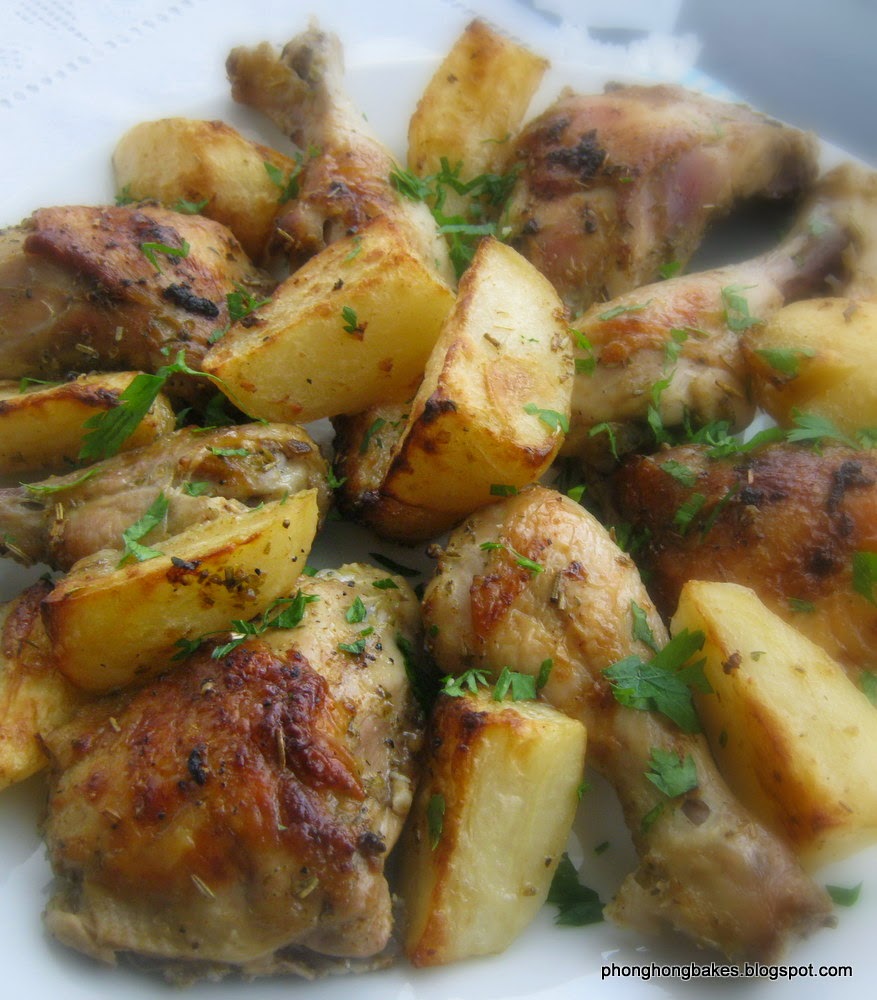 The chicken pieces and potatoes are mixed together with lemon juice, salt, pepper, cayenne, garlic, dried rosemary and oregano. You may choose to leave the chicken to marinate for and hour or two or you could roast the chicken immediately. I chose to roast immediately because I was very hungry hah..hah...There's quite a bit of liquids used because you have to add some chicken stock or water to prevent the chicken and potatoes from burning. 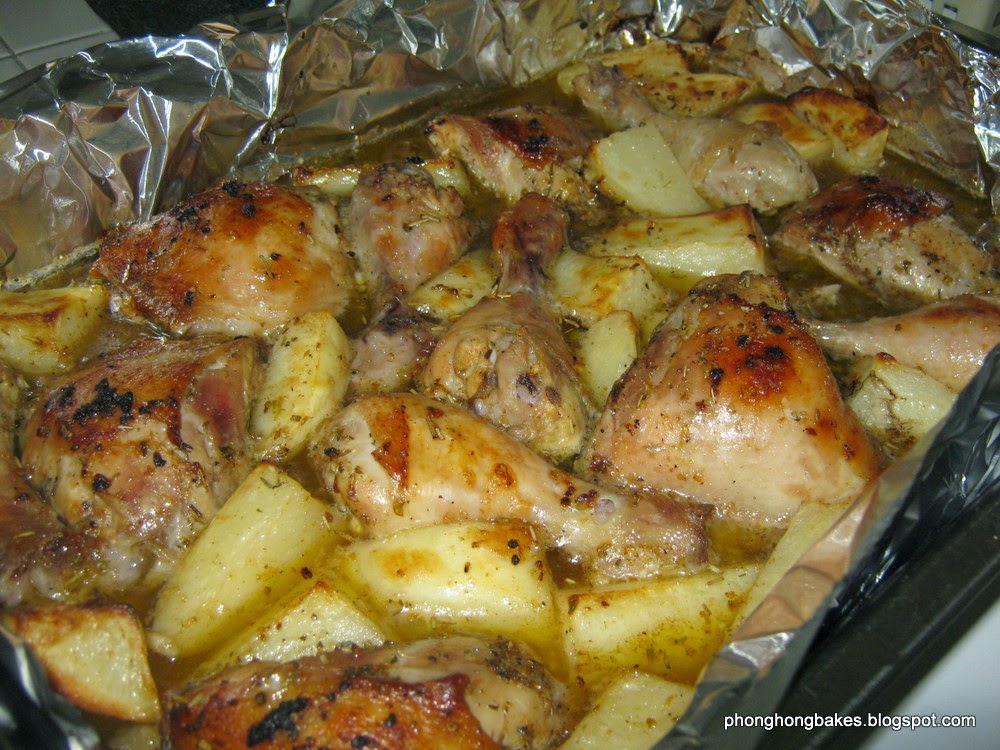 There is no fear of burning actually because our local chicken here tend to release a lot of water when cooked. I found my chicken and potatoes swimming in lots of liquid but this is not an issue if you want lots of delicious gravy. I am not much of a gravy person, so in future I will leave out the chicken stock. 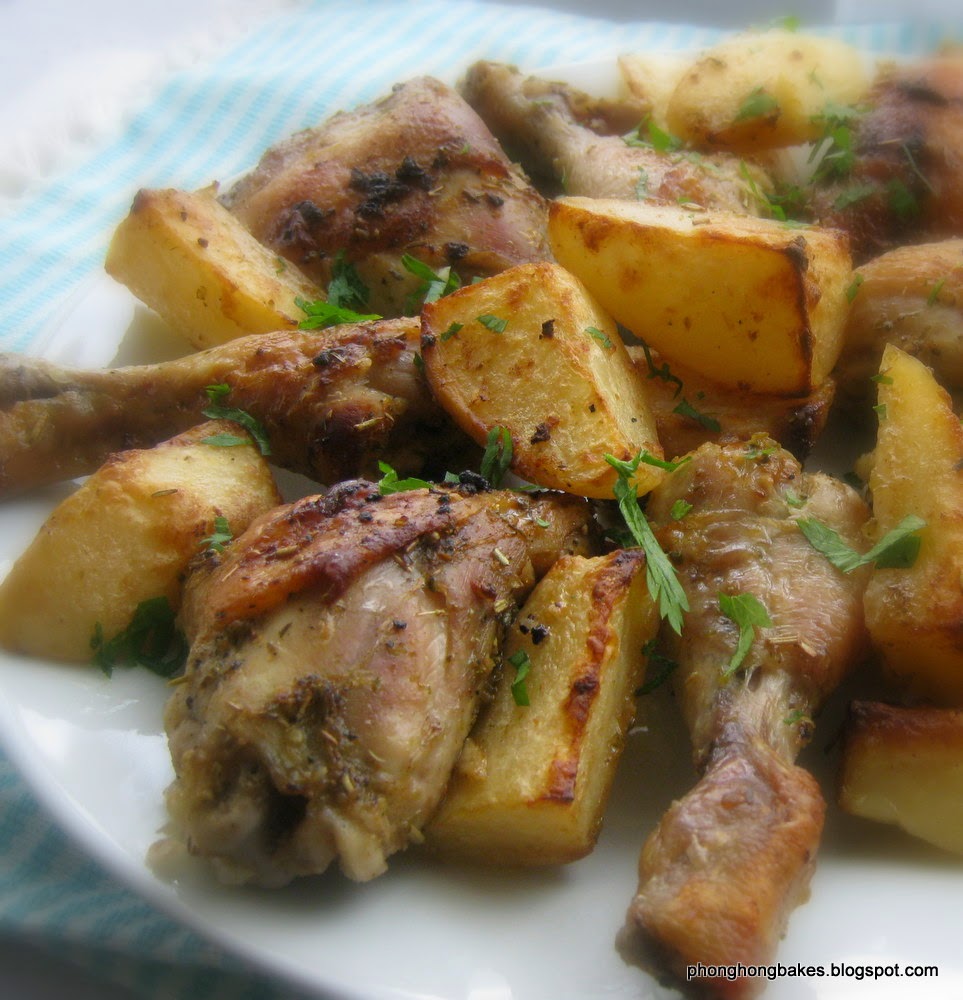 After 50 minutes, the chicken was beautifully browned. I removed the chicken pieces and drained off a fair bit of the roasting liquids. I let the potatoes roast for a further 30 minutes to let them brown and crisp up further. That was a long wait. 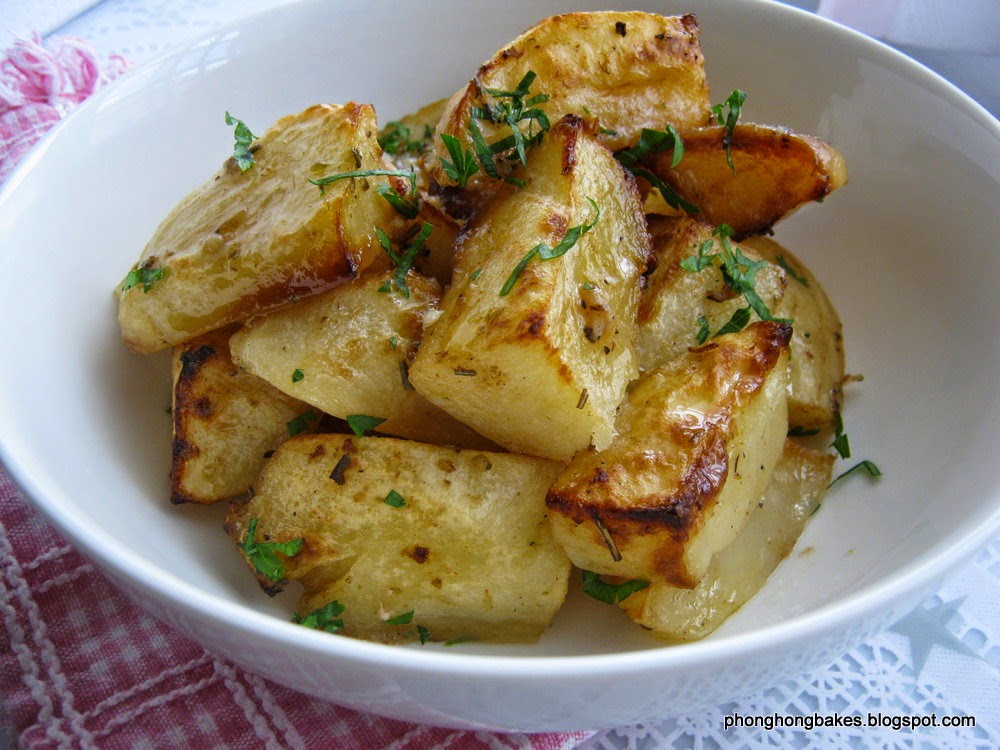 Once they were done, I couldn't wait to dig in. Ooohh...this chicken is so delicious! And best of all were the potatoes. They were so tasty. Crispy on the outside and soft and creamy on the inside. I had a hard time resisting taking more than my fair share. I think people will fight for the potatoes and not the chicken, so for heaven's sake, put more potatoes! 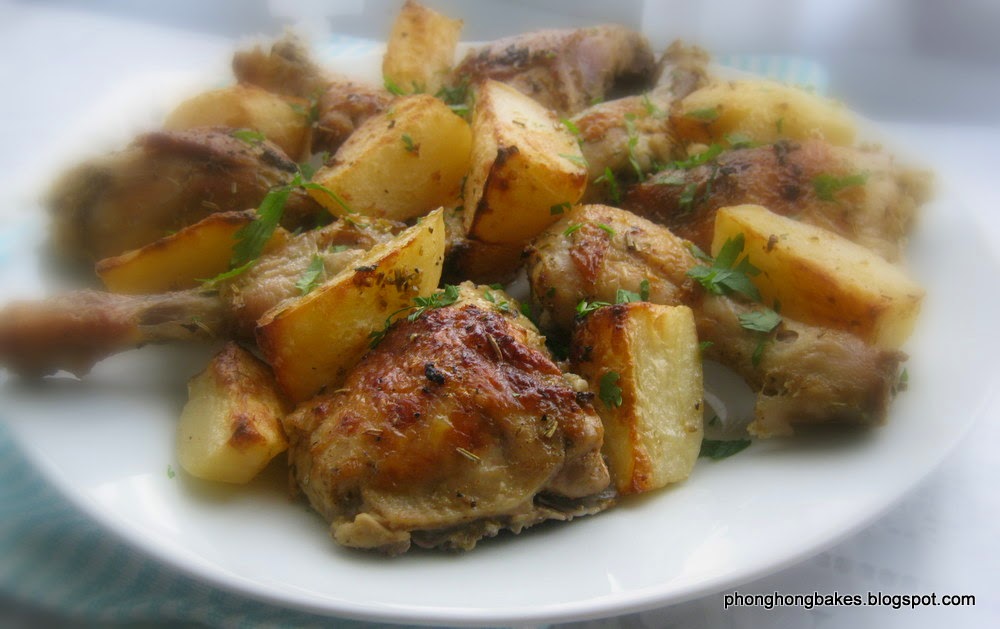 I was very happy with my lunch and since I have a few more lemons in the fridge, you can be sure that this Greek Lemon Chicken and Potatoes will make its appearance again in my kitchen. 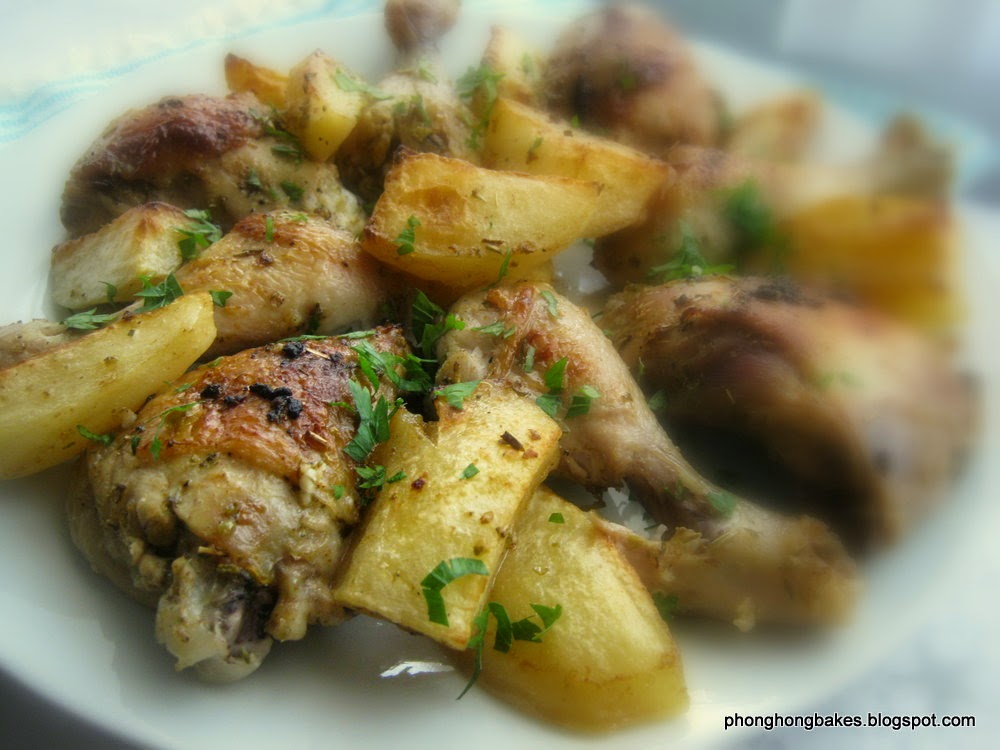 Method :
1. In a large mixing bowl, mix chicken and potatoes with sea salt, pepper, rosemary, oregano, cayenne, garlic, lemon juice and olive oil.
2. Grease or line a large baking tray and arrange chicken pieces in a single layer. Place potatoes in between the chicken pieces.
3. Pour marinade over the chicken and potatoes.
4. Pour chicken broth into the pan (this additional liquid is to prevent burning. But my chicken released a lot of water and made the pan very watery. I will leave it out in future)
5. Roast at 200C for 45-50 minutes until chicken is cooked and browned. 20 minutes into roasting, turn the chicken and potatoes to coat them in the marinade. Continue roasting and do the same thing after 20 minutes.
6. Once chicken is done, remove and set aside.
7. Continue roasting the potatoes until they are crisp and brown.
8. Serve immediately. 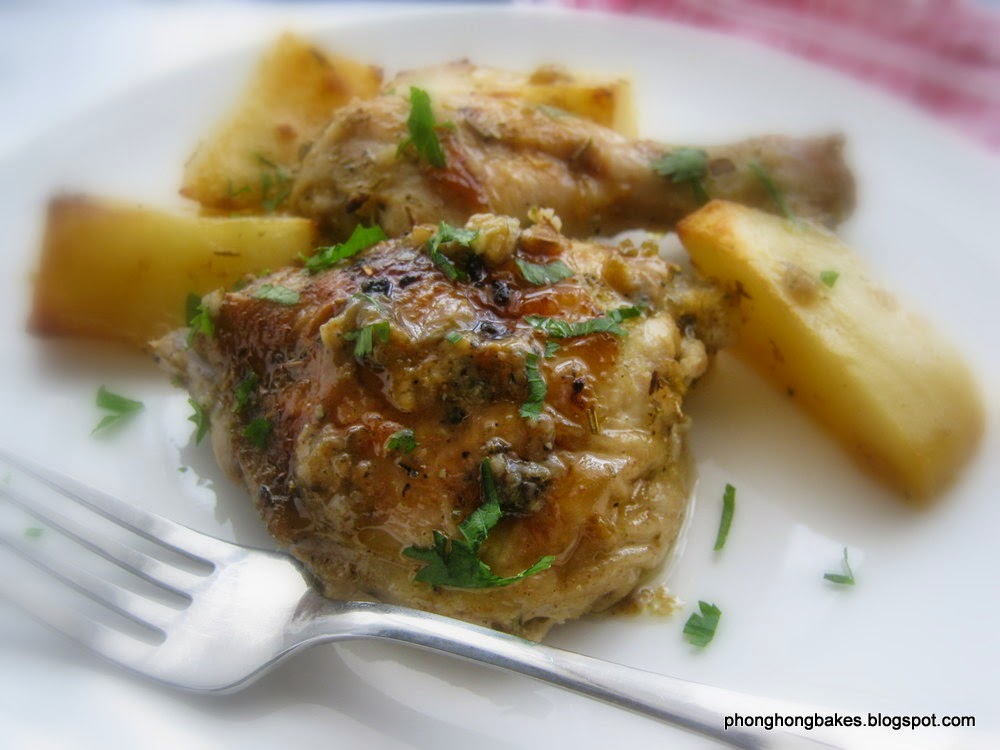 This post is linked to the event, Little Thumbs Up organised by Zoe of Bake for Happy Kids and Doreen of My Little Favourite DIY and hosted by Diana of The Domestic Goddess Wannabe.
Posted by PH at 08:16