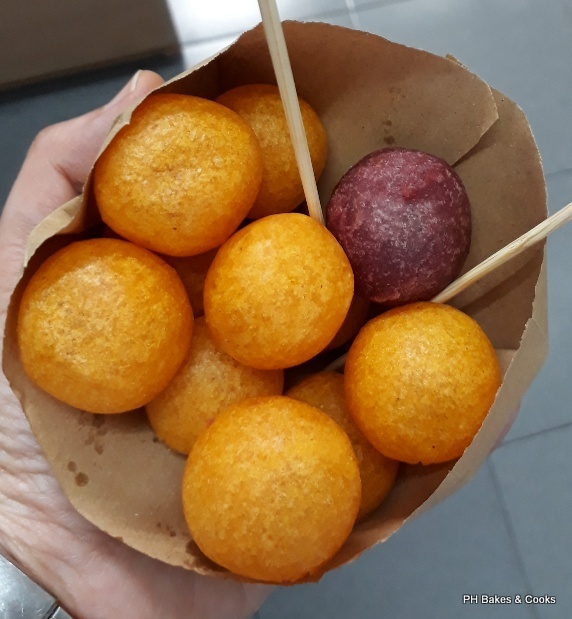 I have been passing by this light blue food truck practically every work day but I was never curious enough to find out what they were selling. I only noticed the name on the truck - Potaboy Traditional Handmade Sweet Potato Ball. 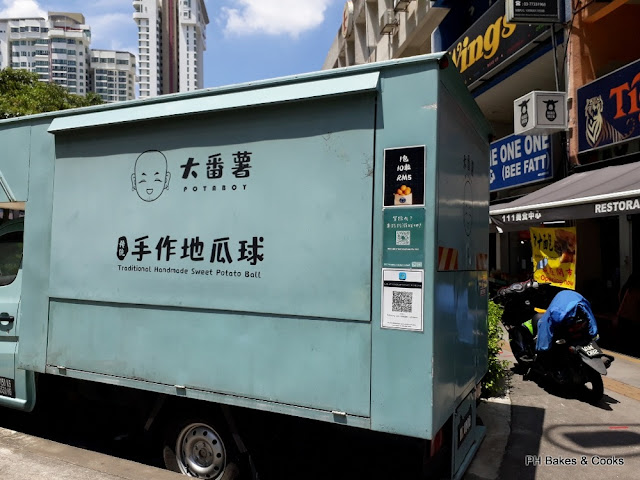 Somehow it did not pique my interest until I read eatwhateatwhere's post on Taiwanese Golden Sweet Potato Balls. Now, that got me very interested hee...hee...hee... 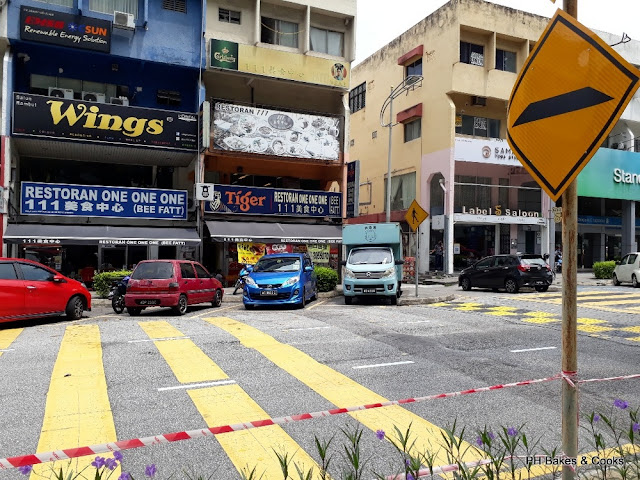 I reckon that Potaboy must be selling the same type of sweet potato balls. So I walked over to the truck (which is parked in front of a coffee shop, Restoran One One One) but they were not open yet. That was about 12:30pm.
I came back another day and I made sure to come later. But the guys were just setting up and I was told that it would take about 15 minutes before they were ready to prepare the sweet potato balls. 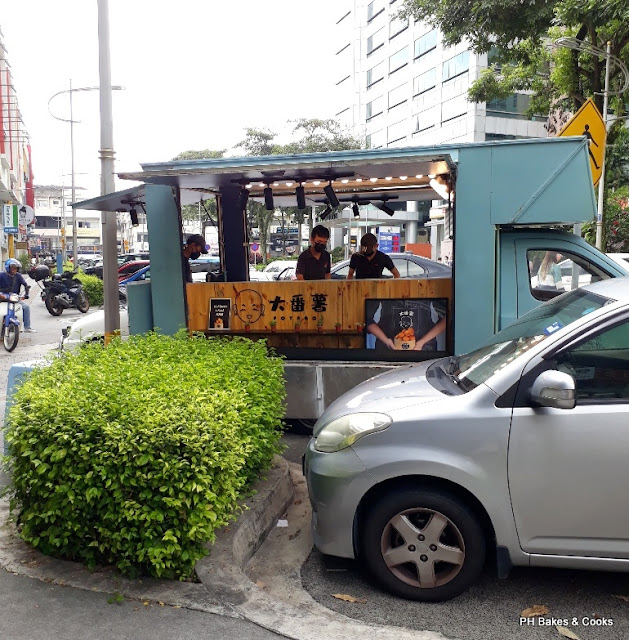 So I came back much later and since they had sold off a batch, they prepared a fresh batch for me. 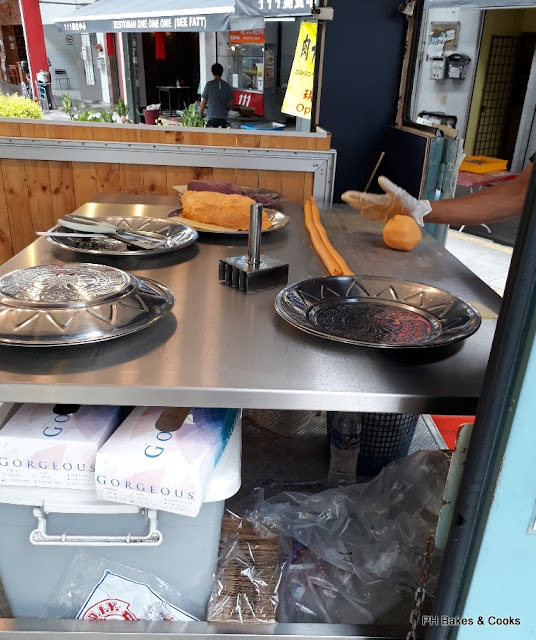 They already had a tray of the dough prepared and as soon as the guy fried that batch, his assistant started another batch. The dough is prepared in big blocks and cut to size. 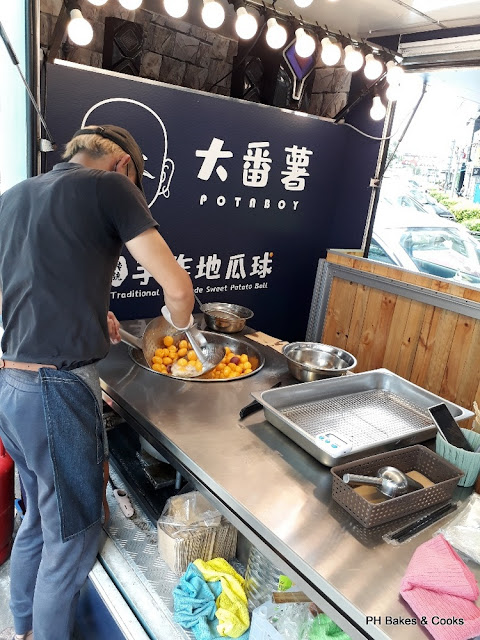 I was lucky enough to witness how these sweet potato balls were fried.
The guy heated up the oil in the big wok and when the oil was hot enough, he emptied the tray of pre-prepared dough. 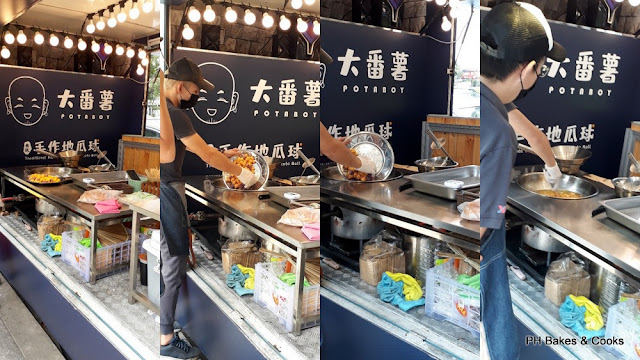 Then there was a whole lot of stirring going on, which I reckon is to ensure that the balls were evenly fried and not stick together. 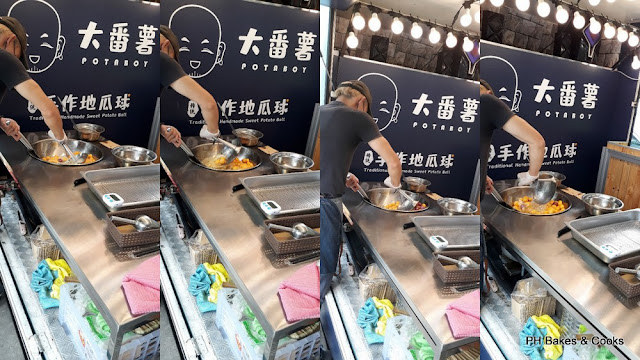 It was interesting that as time passed by, the dough inflated and the guy used a tool that looks like a perforated ladle to press the balls. He pressed very hard and the balls kept inflating. 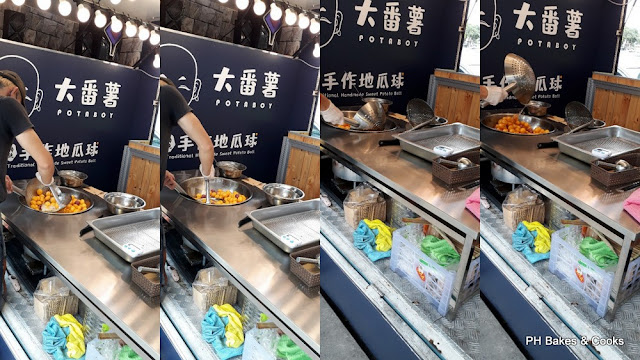 Very soon, the wok was filled to the brim with the fried sweet potato balls. 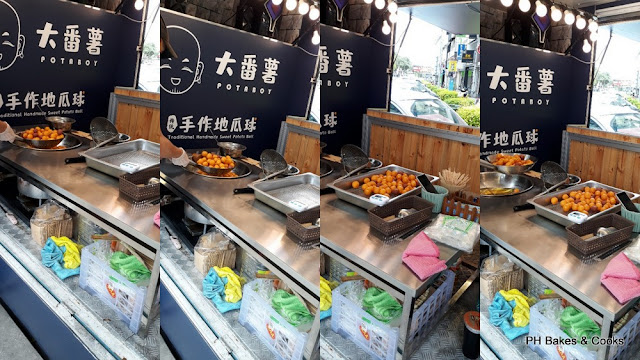 The guy fished the balls out with a large ladle and tossed to remove excess oil. Then he poured the balls onto a tray lined with a metal cooling rack. 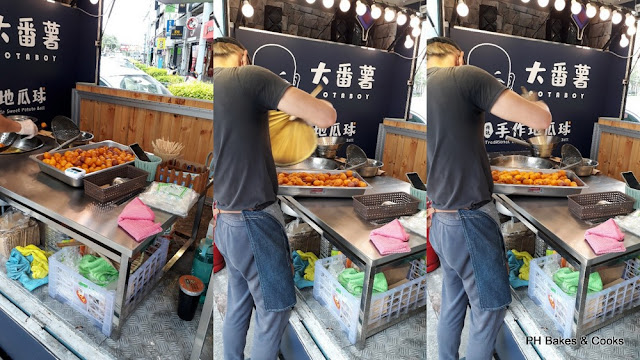 Then he used a fan to cool the fried balls. 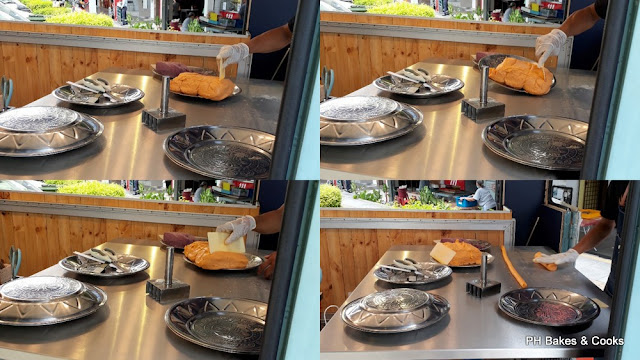 While all the frying action was going on, the assistant prepared another batch of dough. 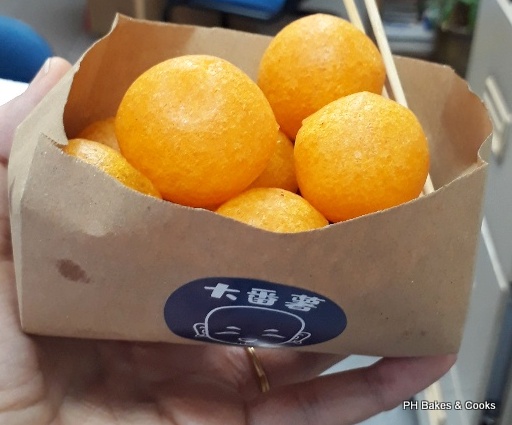 I happily paid RM5.00 for 10 sweet potato balls and quickly walked back to the office. 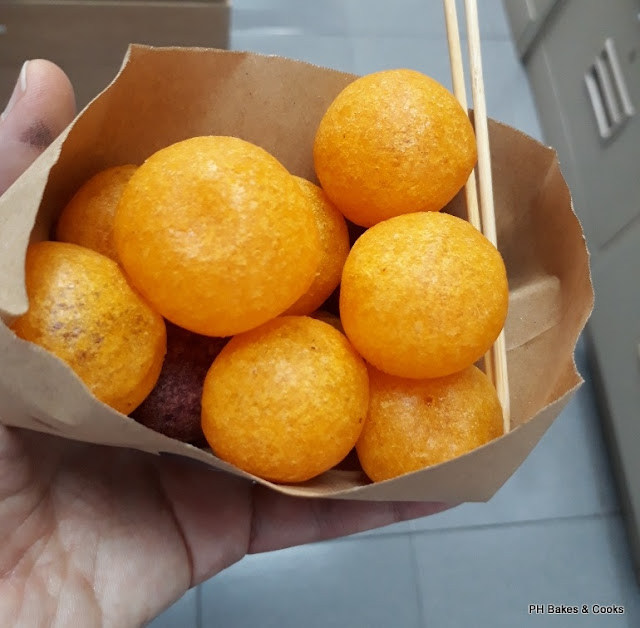 They were still warm when I started eating. Ooohh! Very crispy on the outside and chewy on the inside. I am amazed by how these balls are hollow. 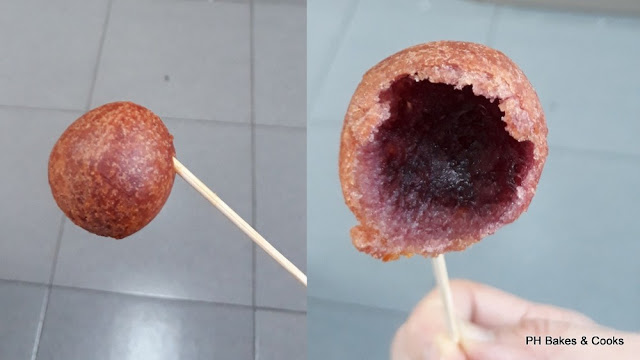 Which means that I am basically eating sweet potato balls and air hah...hah..hah.... 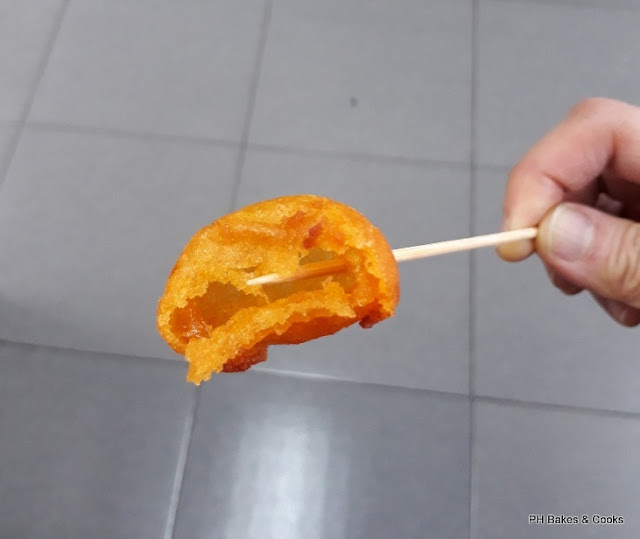 These sweet potato balls are very addictive and trust me, 10 balls are not enough. 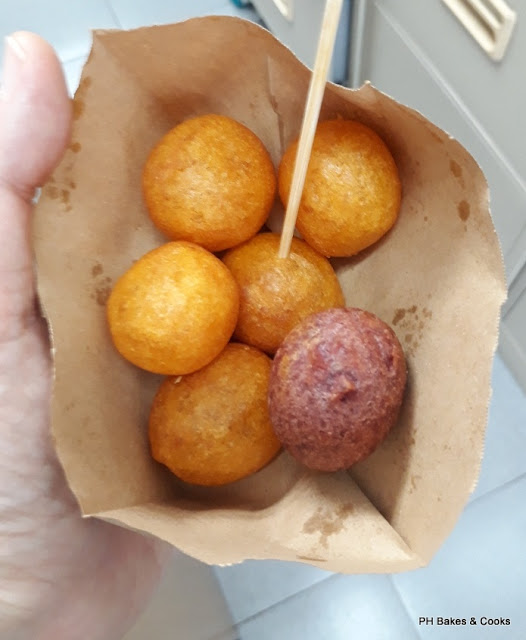 The next day I went over to the Potaboy truck again and although it was already 1:30pm, the guy told me that they were late that day and it would take at least an hour before they were ready to fry. These guys are quite casual about their opening times.
But no worries, my office is nearby and I was so addicted that I walked over a couple of hours later. 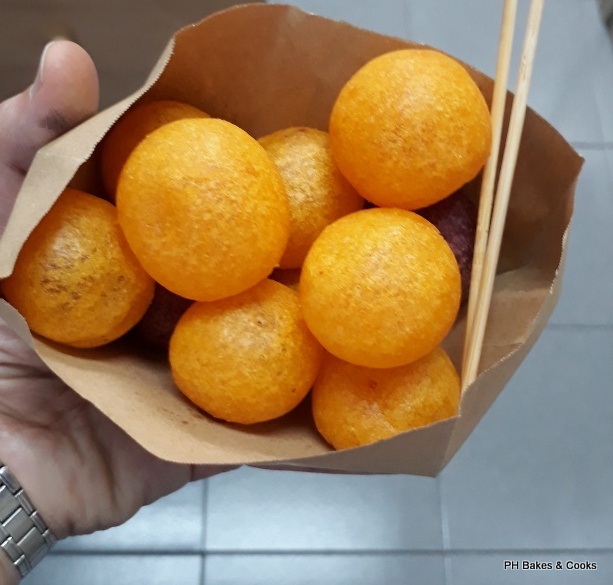 This time I did not have to wait as they had a batch ready in the tray. I bought 2 packets which cleared off that batch. I gave one packet away (see I am not so greedy after all) and noted that I had an extra ball in my packet. The boys must have given extra to clear off all the balls in their tray.
I guess I will be stalking this truck for some days to come. 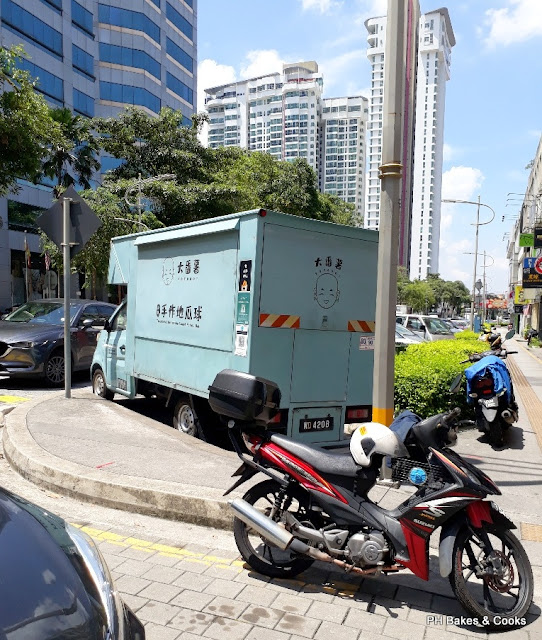 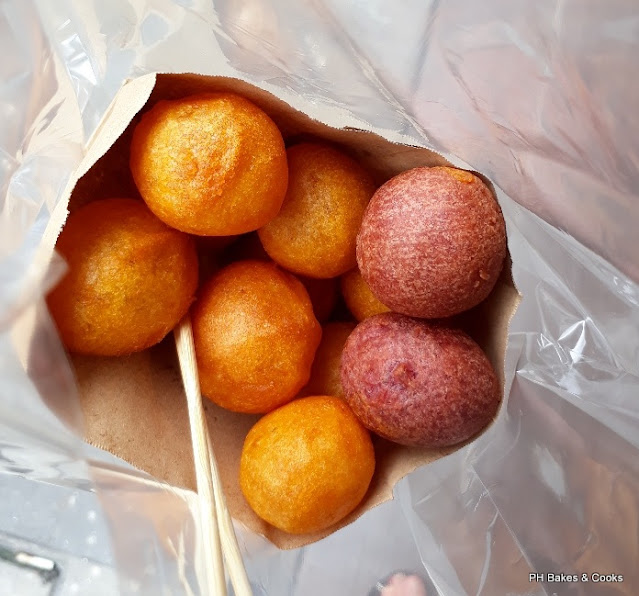 Email ThisBlogThis!Share to TwitterShare to FacebookShare to Pinterest
Labels: Eating Out, Snacks