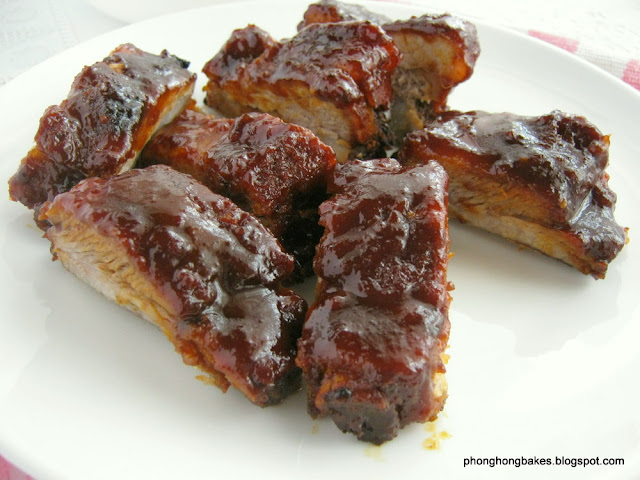 I was at Cold Storage again when I discovered an aisle filled with Korean products. Anything Korean these days bring about a lot of excitement. I'm only into the food and I know nuts about K-pop or Korean melodramas. Something Korean caught my eye.

It was this bottle. 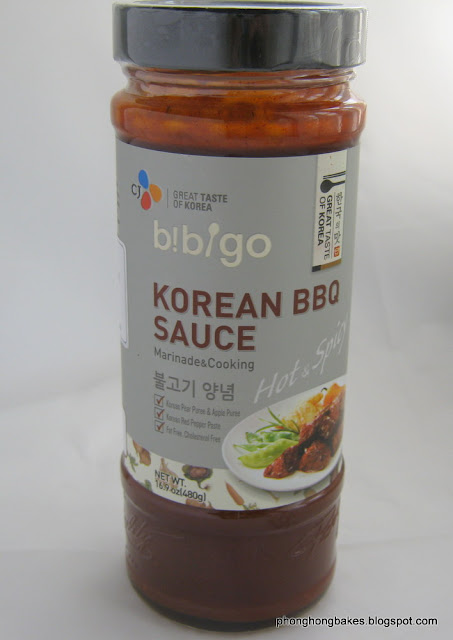 We all love Korean BBQ don't we? Or Korean fried chicken. So of course I was excited when I spotted this Korean BBQ Sauce. It looks very red and the label says "Hot & Spicy". 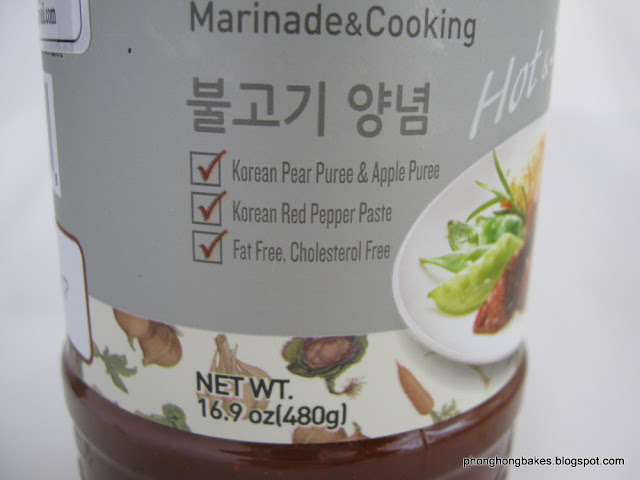 I had 2 racks of ribs in the freezer which I reserved for another spot of BBQ ribs. I do miss my BBQ ribs and I remember the last one was phenomenal. I used the same method with equally good results. 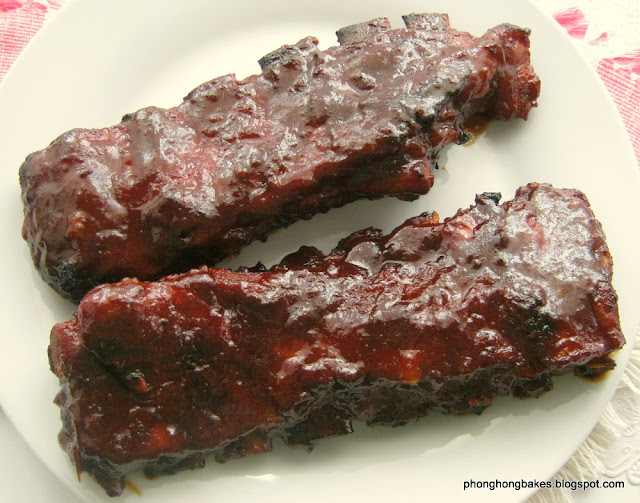 Before cooking, I was debating if I should apply a dry rub on the ribs. In the end I applied the dry rub about 2 hours prior to placing the ribs and BBQ sauce into the slow cooker. 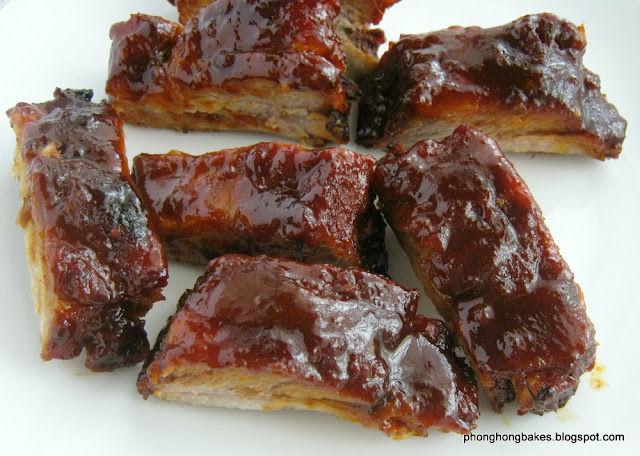 After opening the bottle, I had a taste of the sauce. It tasted very much like chili bean sauce (toban djan), pungent, salty and sweet. And it was also very hot whoohoo! And the best part is that I made the dry rub with 2 teaspoons of cayenne pepper which means my ribs will be explosively hot. 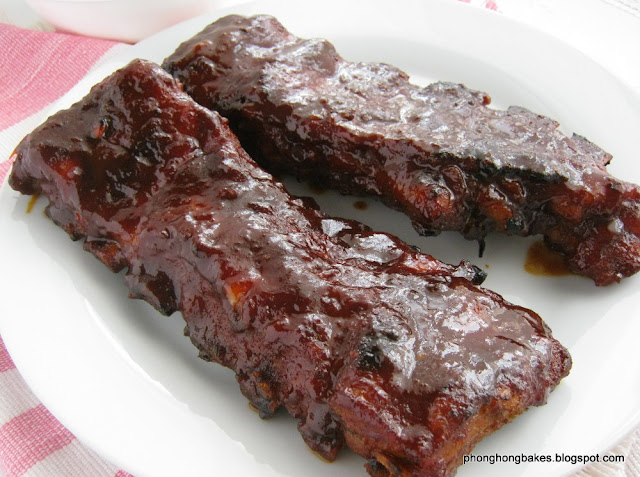 True enough, when the ribs were ready, I had a taste of the sauce and yikes! It was super pedas (hot)! Luckily, I made some coleslaw and that would sure help me to cool things down a bit. 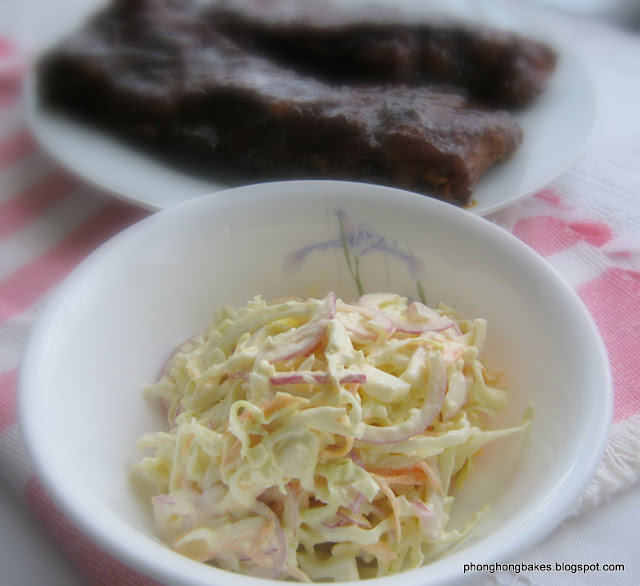 Before tucking in, I grilled the ribs in the oven for about 10 minutes to caramelize the ribs a little bit around the edges. Well, I don't have to tell you how good the ribs were. They were moist and tender, the meat falling off the bone. The extra spiciness was alright by me. In fact it added a real kick.

It's great you know, this method using the slow cooker. Now I can forget about having my ribs at the restaurant as I can enjoy a really good one at home at a fraction of the price.

There's still quite a bit of the BBQ sauce leftover and I am looking forwards to making some Korean chicken wings soon! 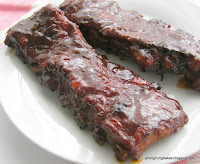 Method :
1. Mix all the dry rub ingredients together.
2. Rub the mixture all over the ribs.
3. Let stand for 2 hours or overnight.
4. Put the ribs into the slow cooker in a vertical position, ie propped against the sides of the cooker.
5. Pour BBQ sauce all over the ribs and place a piece of baking paper over the ribs to cover them.
6. Cover with lid and cook on high for about 2.5 hours (test for doneness by poking the meat using a fork)
7. Once tender, carefully remove the ribs and place them on a lined baking tray.
8. Baste the ribs with the remaining BBQ sauce from the slow cooker.
9. Grill at 200C in the oven for about 10 minutes until the edges are caramelized. 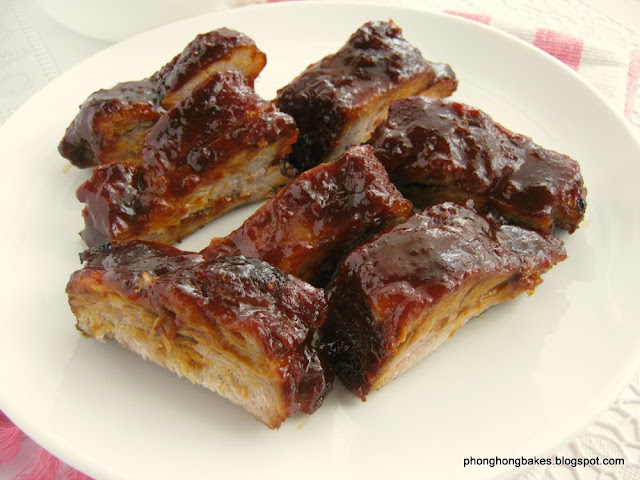