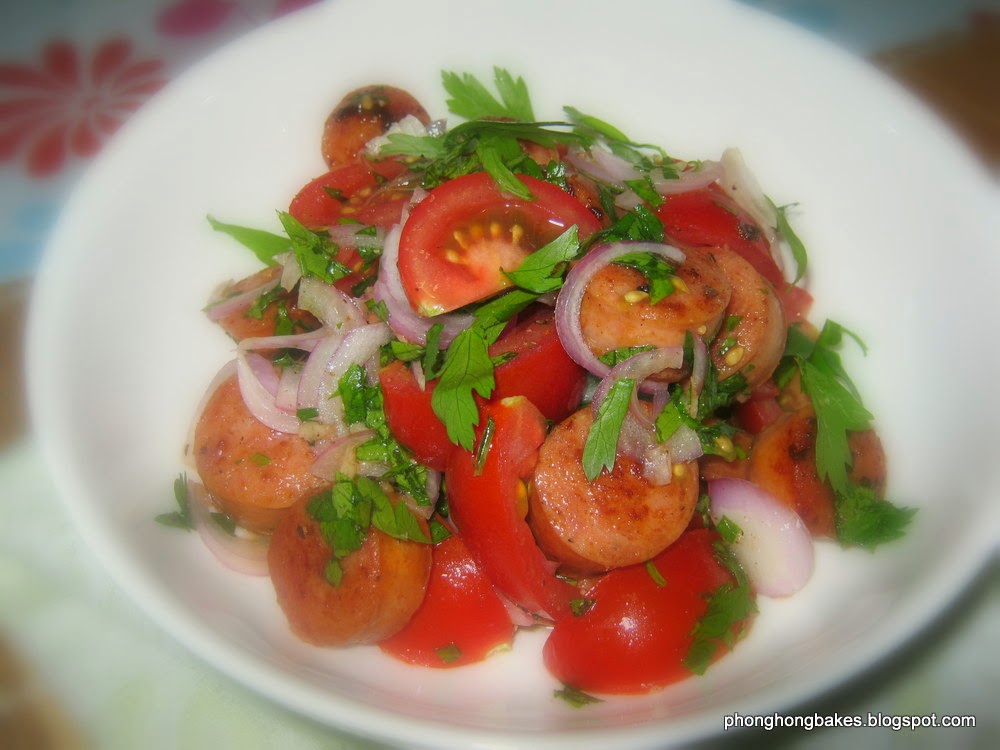 Some time ago, my brother brought a Chorizo Salad to my house for our family dinner party. It was delicious! I asked for the recipe and then I forgot all about it. Then last Sunday I spotted Chorizo at a pork outlet at the supermarket. I immediately thought of my brother's salad and bought the sausages. Back home, after the Chorizo was defrosted, I opened up the packaging. That was when I realised that this was not Chorizo as Chorizo should be! 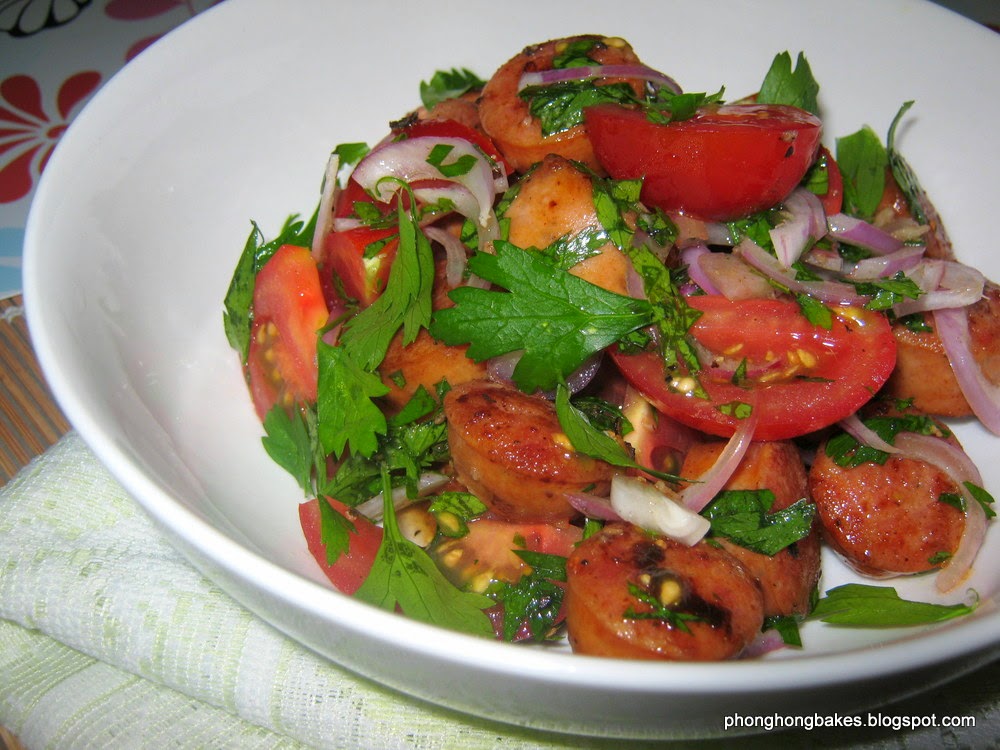 I have bought Chorizo before from Cold Storage and I know what Chorizo looks like. It is soft and has a characteristic red colour that comes from paprika or red peppers. From the packaging this one did have a reddish tinge but when defrosted it became rather pale. And it was solid like a frankfurter. Looking at the cross section after I sliced it, adoi! it further confirmed that this no Chorizo.

I was very disappointed. Kena tipu! (cheated!). Perhaps the sausages were incorrectly labelled or that was the outlet's interpretation (they make their own sausages) of Chorizo. When I looked closer at the ingredients list, it said chicken (to my horror!) in English and pork in Bahasa Malaysia (khinzir)! So which is which? 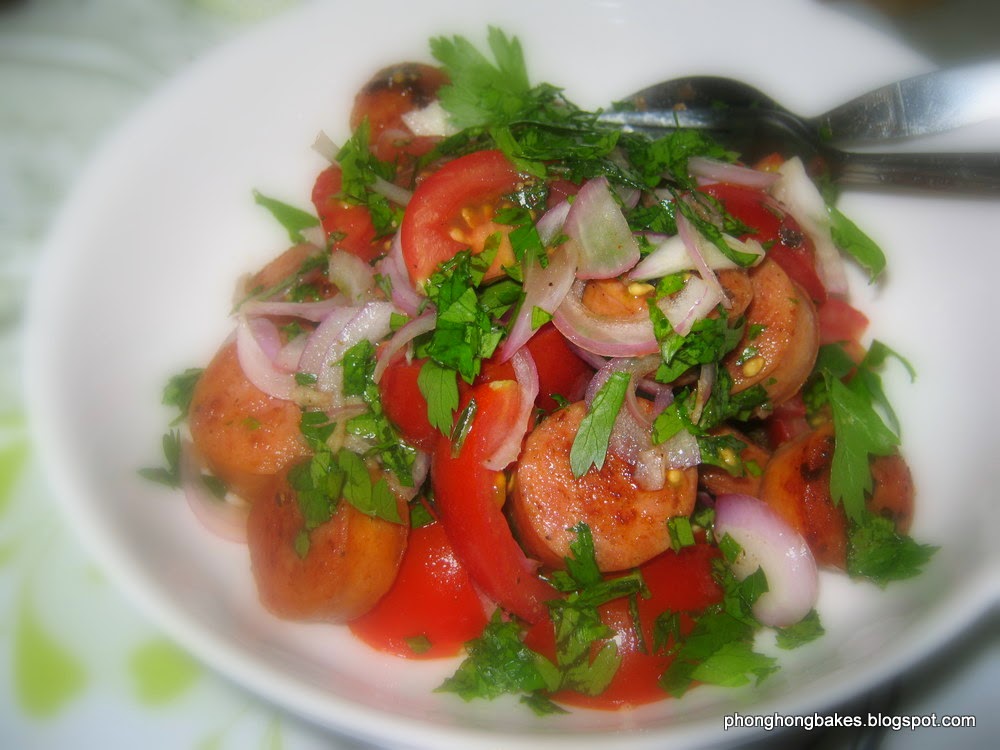 Oh, never mind. It was too late as I already had all my other ingredients ready. I found a recipe at Tesco Real Food and used it only as a guide. The recipe calls for only 2 teaspoons of sherry vinegar to 2.5 tablespoons of olive oil. I felt that the dressing was too little and used my own recipe. When I fried the sausages, I sprinkled some Hungarian paprika on them to make up for the absence of paprika. This so-called Chorizo tasted more like black pepper sausages. Though it was good for an ordinary sausage, it ain't the real deal. I had my craving for "Chorizo" Salad satisfied, sort of...and I have learnt a lesson. Next time, I'll be sure to source for the real thing from Cold Storage. Tsk..tsk.. 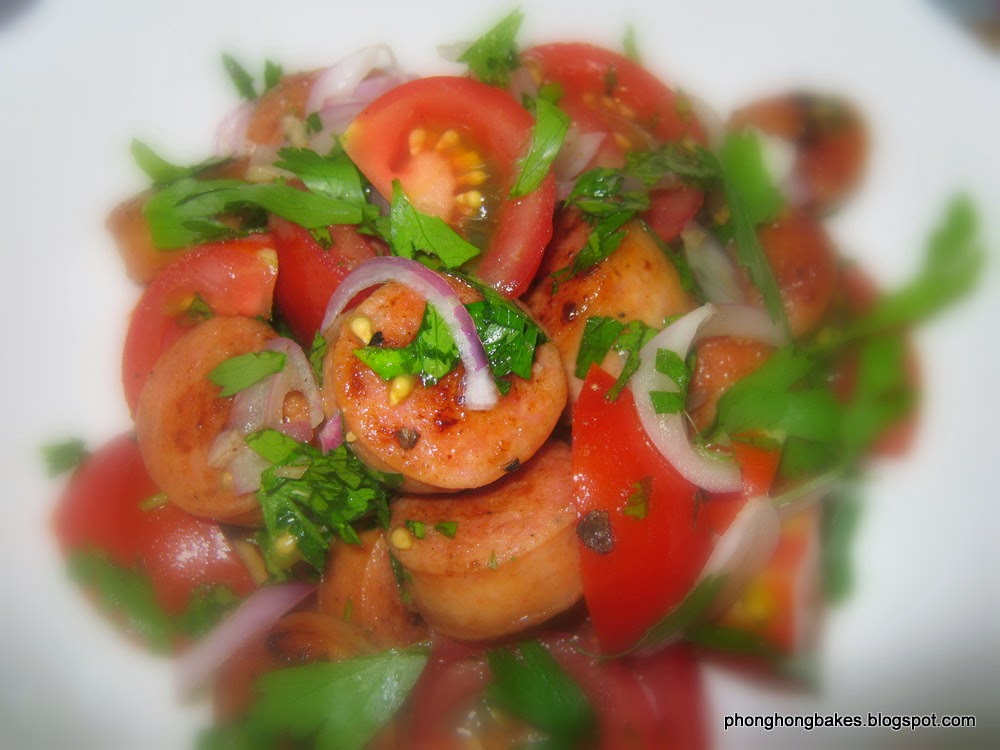 1. Fry the sausages in a hot pan until brown. Remove and set aside. Reserve the oil in the pan (it has loads of flavours).
2. To make the dressing, pound garlic, black peppercorns and salt till fine.
3. Mix the pounded ingredients with red wine vinegar, maple syrup, olive oil and 2 tablespoons of oil from the frying pan.
4. In a mixing bowl add fried sausages, tomatoes, onions and chopped parsley.
5. Add the dressing and toss to mix well.
6. Garnish with extra chopped parsley and serve immediately. 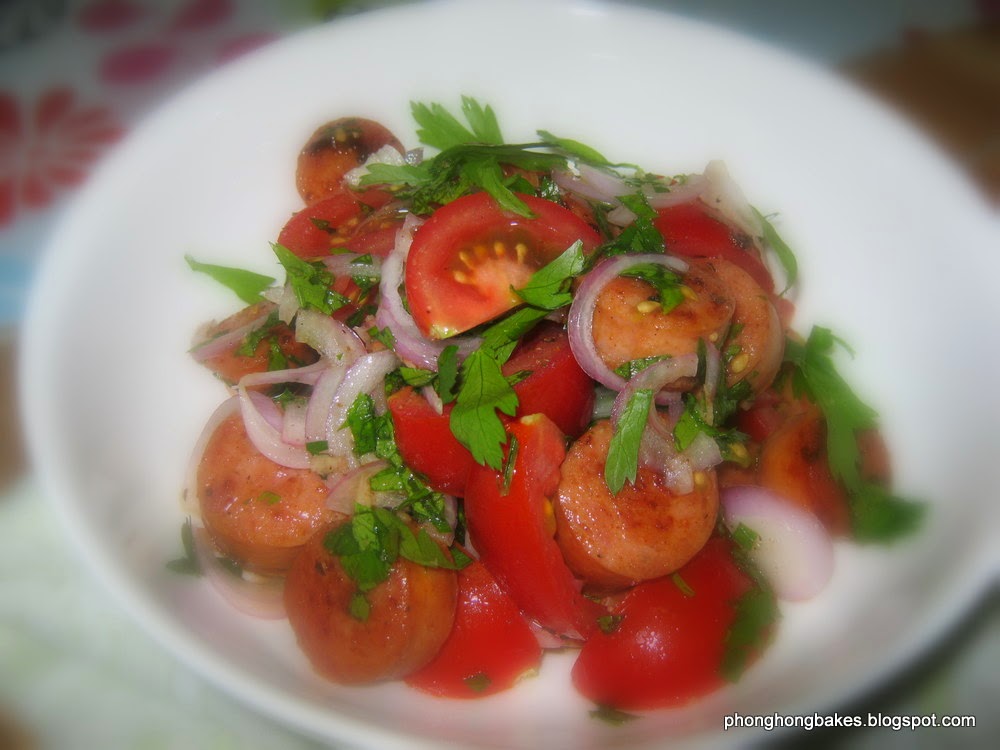