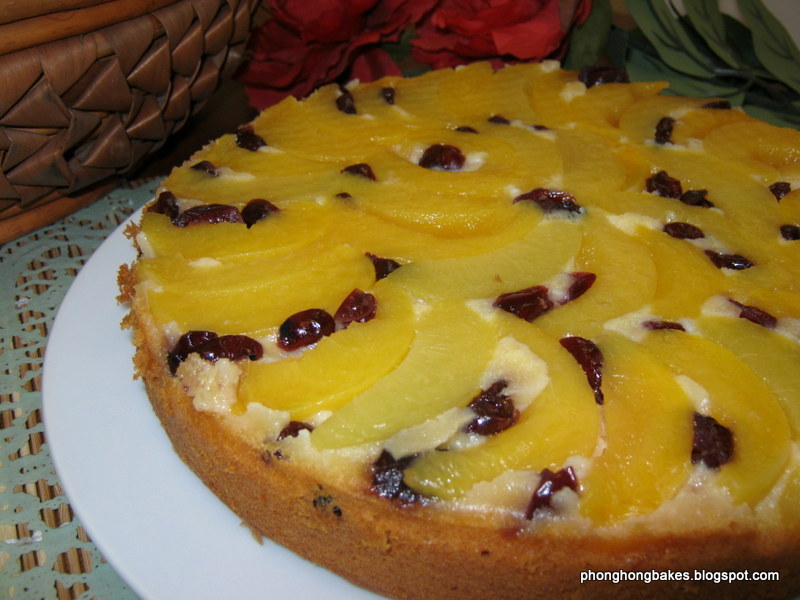 I love canned peaches with vanilla ice-cream or with any other desserts. When this recipe was published in The Star on 18 December 2012, I immediately cut and kept the recipe. Anything with canned peaches, I will try :) 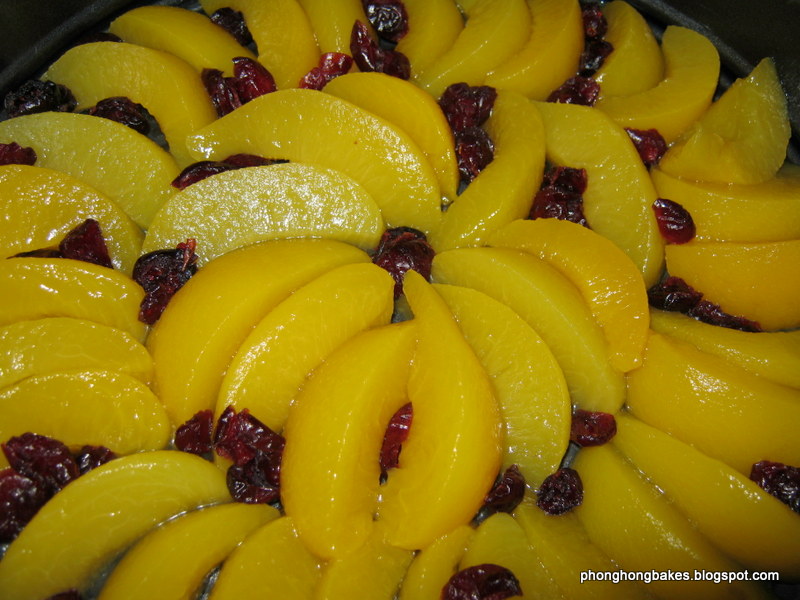 The recipe also calls for raisins and I am not exactly crazy about raisins. So I thought dried cranberries (craisins) would be a nice substitute. Besides, the red color is more attractive. The cake uses egg separation method and you have to prepare the egg yolk batter and the meringue and fold them together. I didn't follow exactly the proper sequence of events and my batter was not quite right. Anyway, in it went into the oven and hopefully it comes out OK. 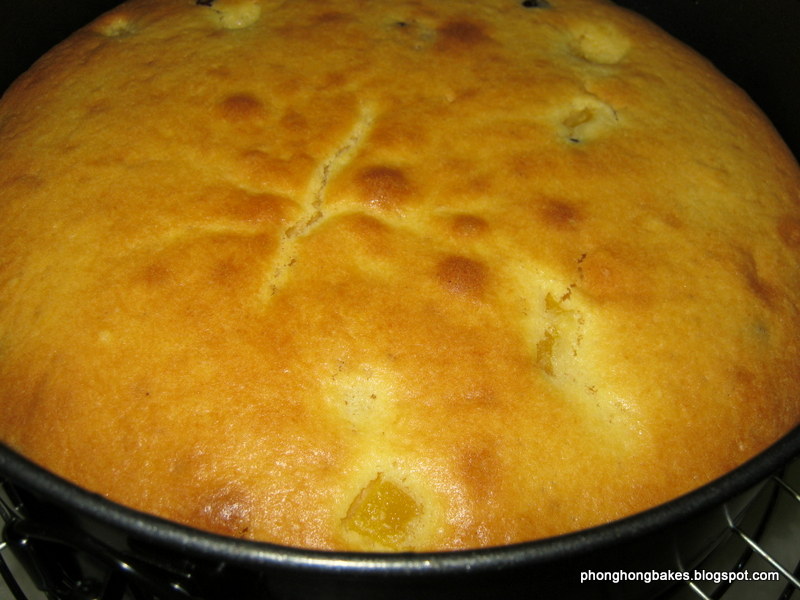 Forty minutes into baking time, I noted the top was quite nicely browned. One of the things that make me nervous when baking a new cake is knowing when the cake is done. I have had instances when the skewer comes out clean but the cake is still raw in the middle. I reckon the top crust scrapes off the raw batter when the skewer is pulled out, giving a false indication. That's what happened this time. 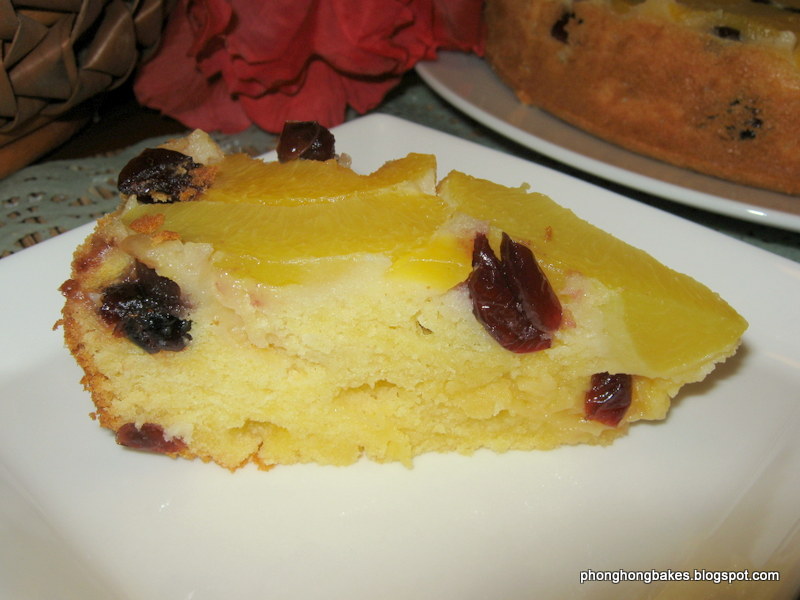 I waited until 45 minutes was up and removed the cake from the oven. After cooling for about 10 minutes or so, I removed the cake from the pan. It turned out alright but ugh! I didn't like the smell. The smell of cooked peaches mingling with the smell of cranberries. This can't be good, I thought. But never mind, let it cool further and taste later. 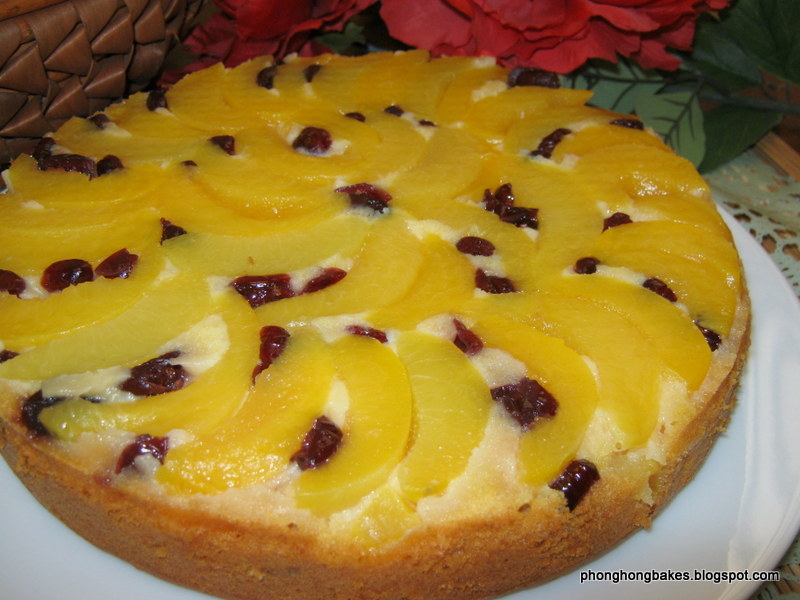 I cut into the cake and arrghh!!! the middle part the size of a 20 cent coin was still raw. Looks like I am still a "lesen L" in baking. LOL! I just cut the raw part off and tasted the cake. Hey, not bad. It didn't smell unpleasant like earlier. The combination of the peaches, cranberries and buttery cake was quite nice. But I wasn't raving over it. I'm not giving up on this cake yet. I will bake it again with just the peaches. And I'll have to be careful with the preparation of the batter and the baking time. Hopefully I do better with the next one :) 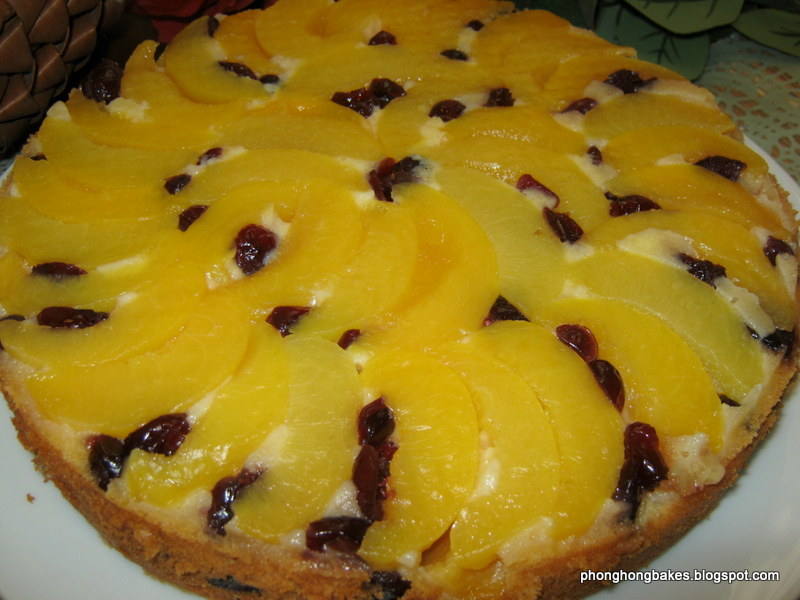 Method :
1. Lightly grease and double line the base of an 8 inch  round pan with baking paper. Grease the paper. (I did not line the pan but greased it with butter on the base and all around).
2. Arrange peach slices in a concentric circle on the base of the pan and sprinkle some of the raisins over them.  Set the pan aside.
3. Separate egg yolks from whites.
4. Beat egg whites until stiff and add the two tablespoons of castor sugar, 1 tablespoon at a time, beating well after each addition.
5. Cream butter, 80g sugar, essence and salt until light.
6. Beat in egg yolks two at a time, until mixture is creamy and light.
7. Sift in flour, alternating it with the beaten egg whites.
8. Stir in chopped peach, the remaining raisins and apricot liqueur.
9. Spoon cake mixture into prepared pan and spread out evenly with the back of a spoon.
10. Bake in a preheated oven at 175C for 45 to 50 minutes or until cake is cooked through when tested with a skewer.
11.When the cake is done, put the pan on a cooling rack and cool for about 10 minutes before turning over onto a plate.
12. Wait until the cake is cool before slicing. 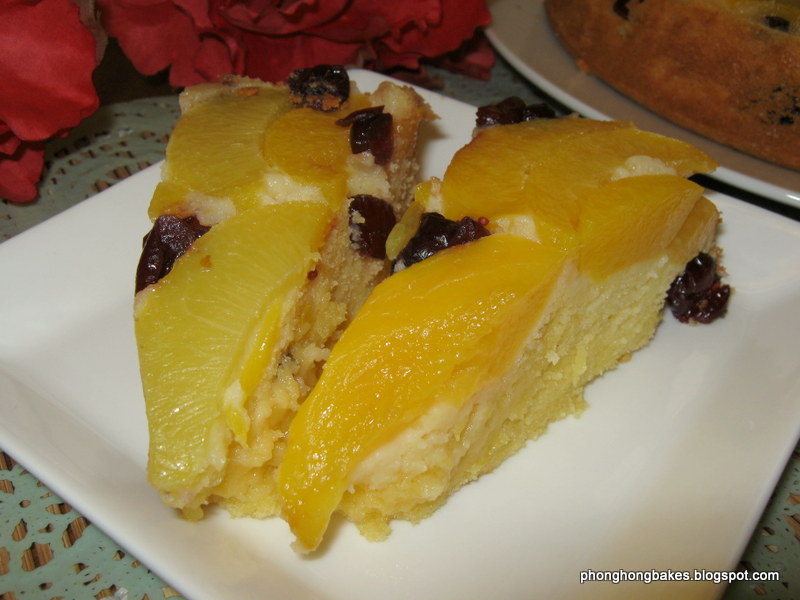