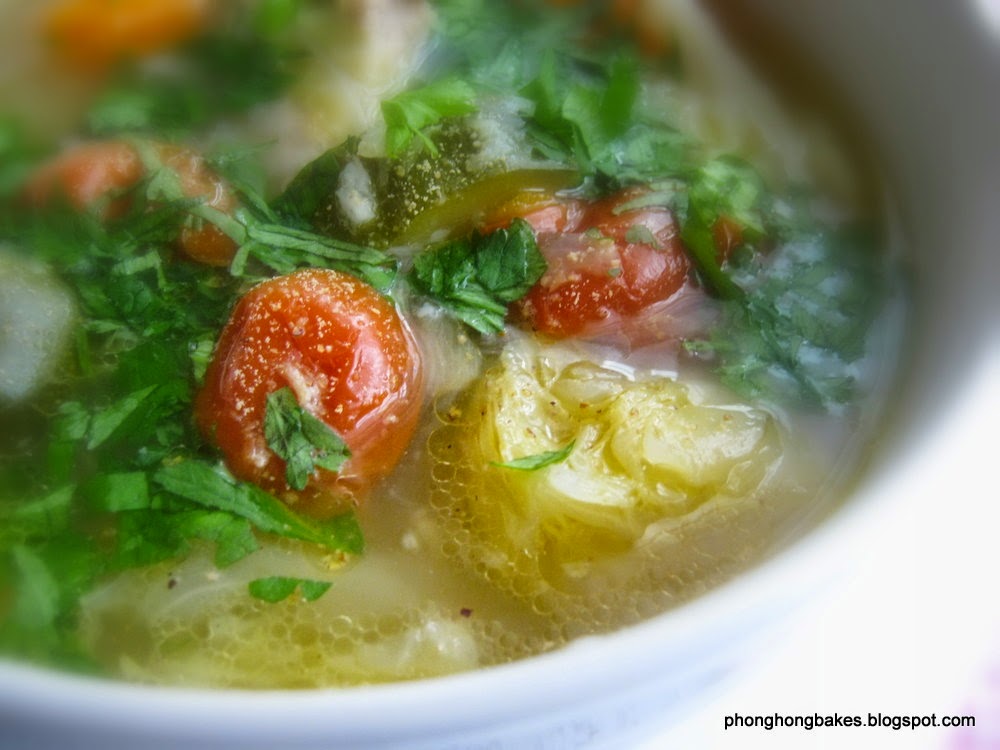 It was the second day of new year and I was happily hanging around in the house. I took a day off from work to enjoy the long weekend. I was so happy and so relaxed. This is what retirement must be like :) 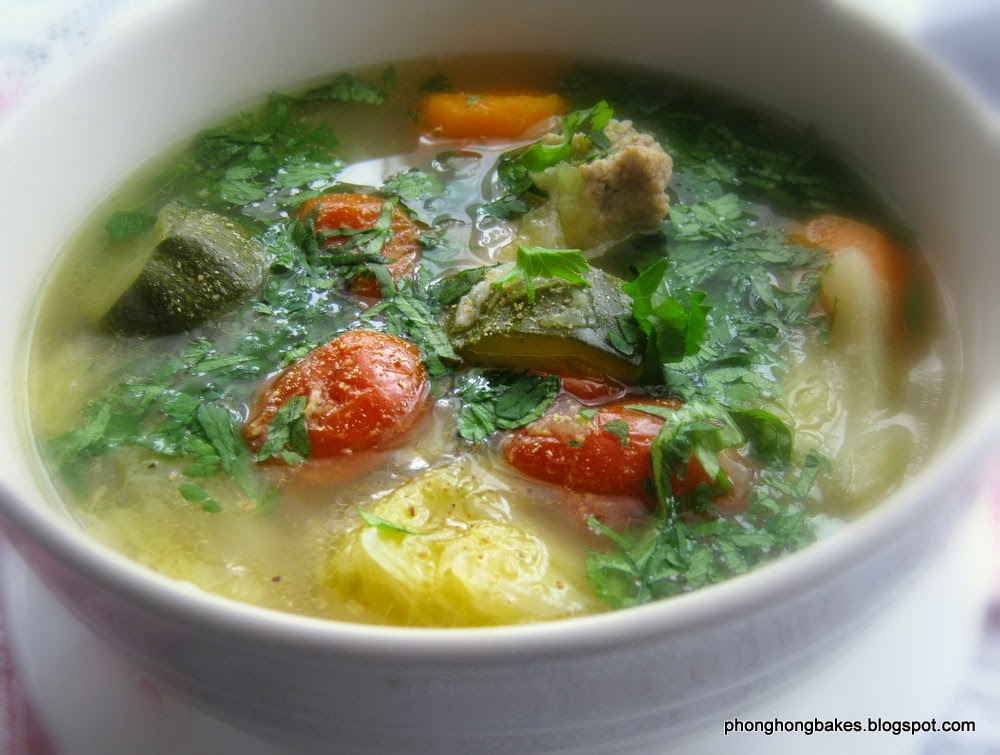 I didn't have to cook because I had already boiled a big pot of soup the day before. I wasn't sure if I wanted to put this soup on the blog because there is nothing special about it. All I did was chuck stuff into the pot and brought it to a boil. That is what I love about soups. There is nothing fussy about it (unless if you are making those artsy fartsy soups that they serve at fine dining restaurants) and you can just walk away while it does its thing on the stove. 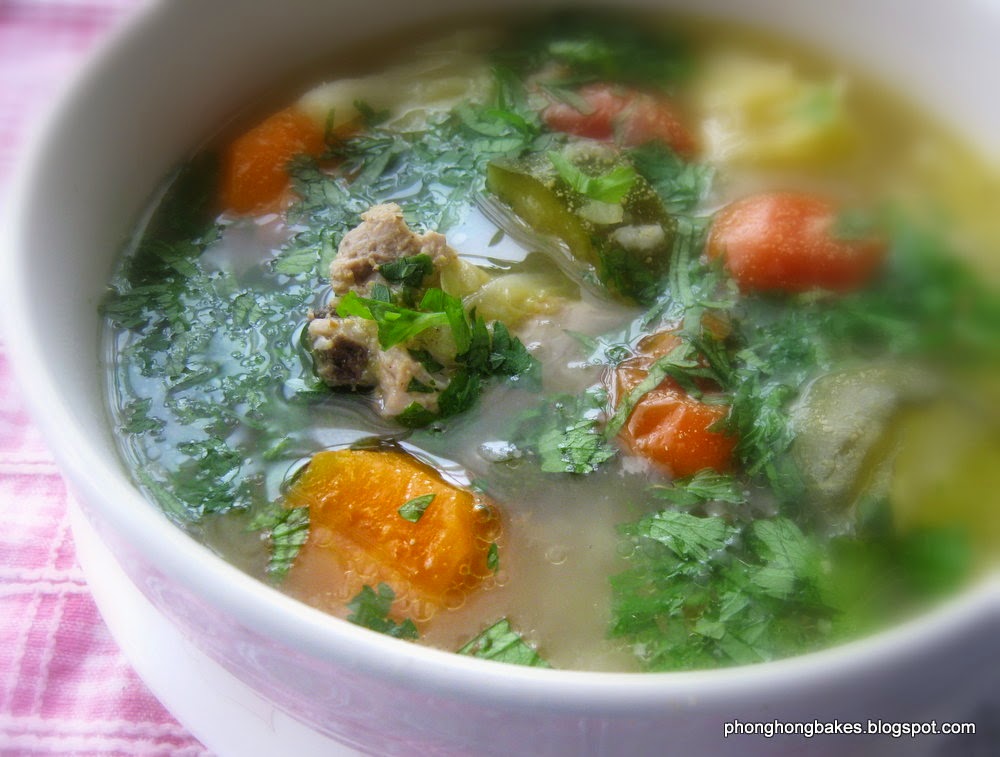 What I did was scald a packet of pork ribs to get rid of scum and other impurities. This is a method I learnt from my aunty and if you do this, your soup will be clear and free of those icky bits of blood and whatnots.

While the water was boiling, I washed and cut the vegetables. I used zucchinis, carrots, onions and cabbage. Since I had some leftover cherry tomatoes, I put them in as well. 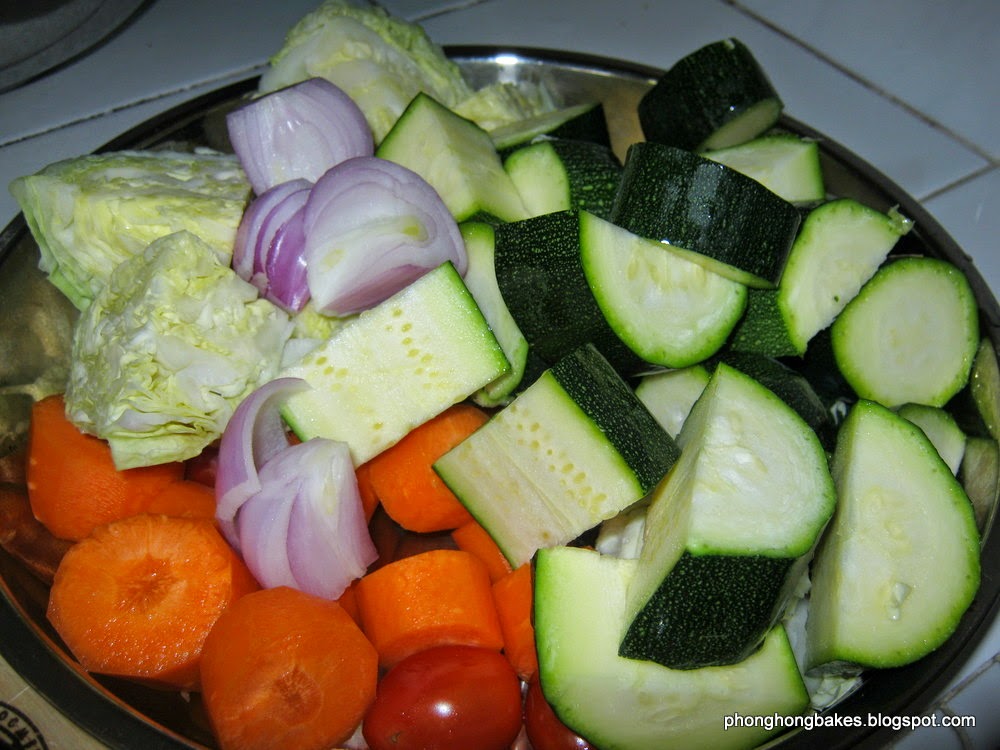 Once the ribs were scalded, I rinsed them under running water and left them to drain. Meantime, I put a pot of water to the boil. Once the water came to a rolling boil, I chucked in the onions, pork ribs and all the vegetables. I pretty much let them boil at the same time because I like my vegetable soft and soggy in the soup. When the water came to a boil again, I lowered the heat and let the soup come to a gentle simmer. Then I left it to its own devices for a good 1.5 hours. And oh, I put in two chicken stock cubes. 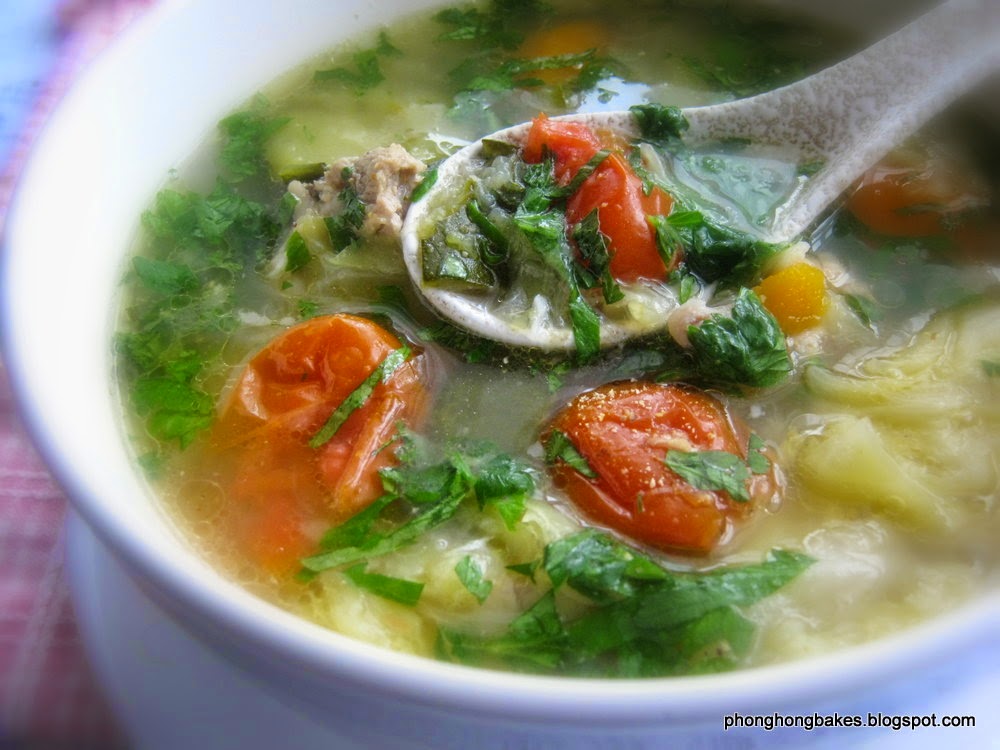 Once the soup was done, I fried some minced garlic and tossed the fried garlic and oil into the soup. This is what adds on to the aroma and flavor of the soup. I was too lazy to make fried shallots. Now that would have enhanced the soup even further. But garlic oil was good enough for me. 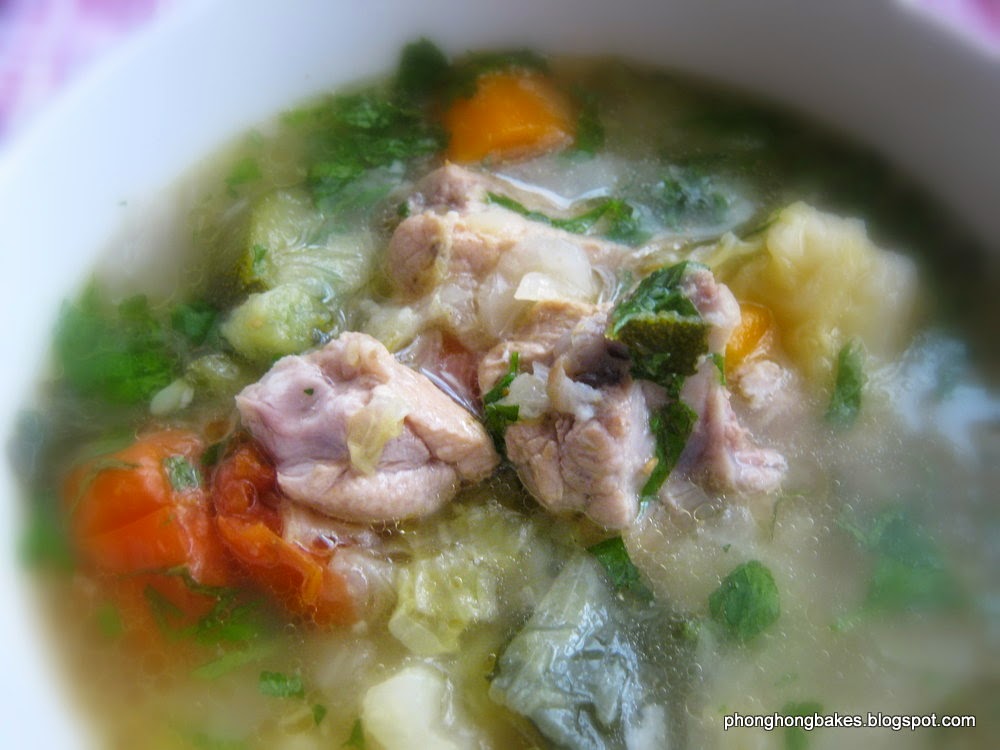 This bowl of soup is a day old and it tasted even better than the one I had when it was freshly cooked. I love soups like this so much that I have them for breakfast. It is a nice change from eggs and definitely a healthier alternative for me in place of nasi lemak or noodles. My soup is meant to last for the weekdays and I don't get tired of having it 4-5 days in a row. But of course I will boil a different soup next week. Try this simple soup. You can use chicken and any other vegetable of your choice. 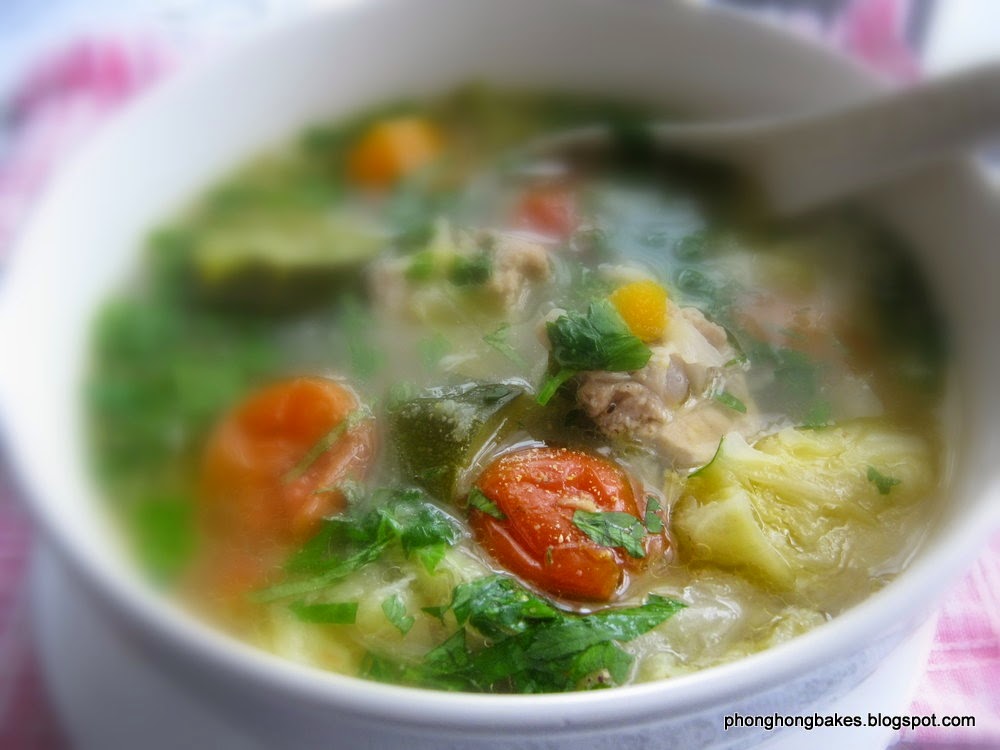 - 800g pork ribs, scalded, rinsed and drained
- 2 zucchinis, cut into chunks
- 2 carrots, cut into chunks
- 1 small head of cabbage, cut into smaller pieces
- a handful of cherry tomatoes (optional)
- 2 cubes of chicken stock (I use Maggi)
- pepper to taste
- some Chinese parsley to garnish (optional)
- 1.2 litres water
Note : I did not add any salt to the soup because it was already salty enough due to the chicken stock.

Method :
1. In a pot, bring water to a boil.
2. Add the pork ribs, zucchinis, carrots, cabbage, tomatoes and chicken stock cubes.
3. Bring the water up to a boil and then cover and then lower the flame. Simmer for about 1.5 hours until the pork ribs are tender.
4. Add fried garlic to the soup if you like (highly recommended)
5. To serve, season with pepper and finely sliced Chinese parsley.

To make garlic oil :
- Heat up oil in a wok and fry the garlic until brown. Then toss the fried garlic and oil into the soup. 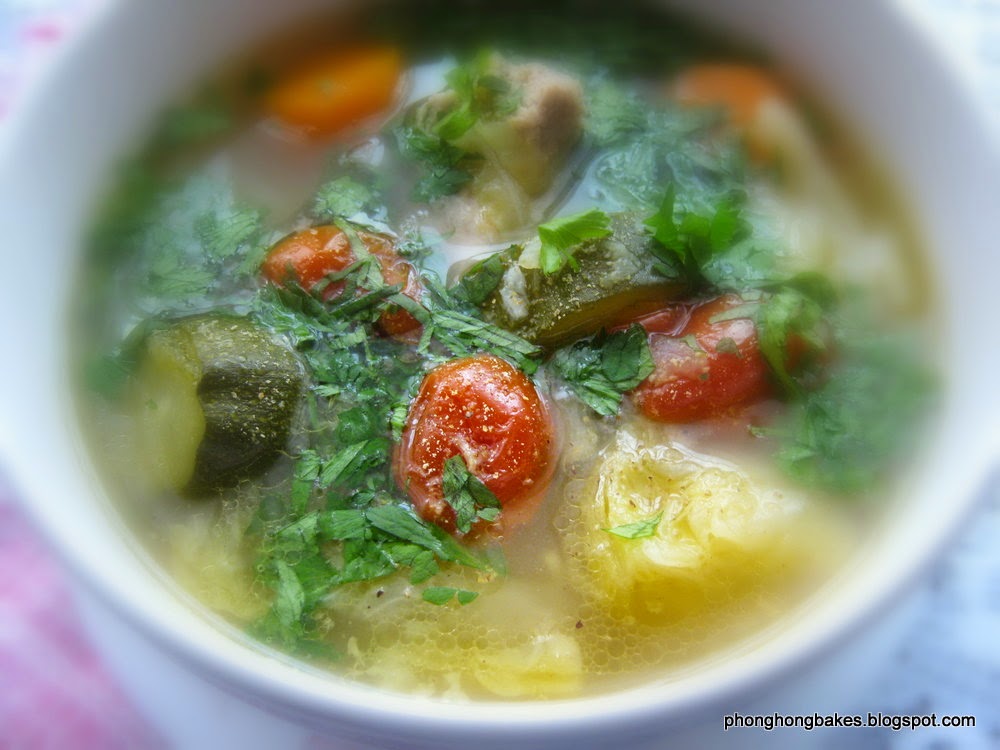