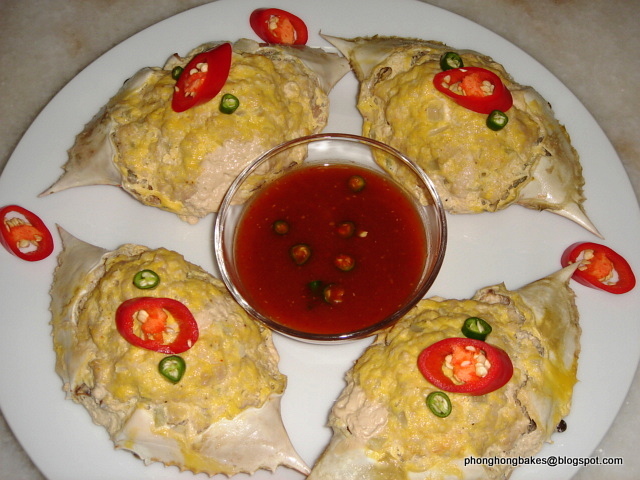 Two Saturdays ago was rather historic for me, my maiden attempt at cooking crabs. Hah! I wanted to recreate Grandma's steamed crab cakes and for the sake of authenticity (and nostalgia), I had to fill them in crab shells.

So I went to the supermarket and checked out the crabs. There were 2 types available, the flower crab (already dead and frozen) and the other type with dark green shells (live  ones and also packaged and chopped up). The nice Bangla man was recommending the live crabs, pointing out to me the ones that have crab roe.

I couldn't possibly handle the live ones (previous attempts involved a lot of screaming), memories of Grandma cooking crabs flashed before my eyes. Every Chinese New Year, Grandma would make these crab cakes for our reunion dinner. She would heat up a huge steamer, dump a whole bunch of live crabs in, close the lid and weigh it down with a heavy mortar. And you could hear the clickety clack of crab claws as the poor things tried to escape. Horrors! Well, that was Grandma's style. And she is capable of lots of other stuff too. But let's not go there.

I also bought some minced pork. Back home, I left the crabs to defrost further. Meanwhile, I seasoned the minced pork. I was clueless as to how long to to cook the crabs. So I just "agak-agak" (estimated) and boiled them for 25 minutes. A note about my cooking method. A very kind Mrs Lee left me a comment on Quay Po's post and she suggested that I should have steamed the crabs instead.

When the crabs were cool enough to handle, that's when the hard labor began. I had forgotten how time consuming it is to extract the crab meat. An how messy. Back in the day, once in a blue moon, my Dad would buy a bunch of crabs from the fisherman and we would just have crabs for lunch. We would spread newspapers on the dining table and use a pestle to knock the crab claws and legs to get to the meat. By the time I got the hang of it, it was over. No more crabs. I don't even know if I was full because I was so focused on hammering the crabs.


Back to my crab cakes. I added the crab meat (there were some leftovers for my simple lunch) to the minced pork and stuffed them into the shells. And brushed them with egg yolk before steaming for about 25 minutes.

And how did they turn out? Tasted just like Grandma's! Was it worth the effort? Yes and no. Next time, I will look for frozen crab meat (don't buy the ones in cans, they are awful) and fill the crab cakes in small bowls instead. But who knows? By then I would have forgotten about the hard labor and start all over again.

Method :
1. Mix all the above ingredients.
2. Stuff generously into crab shells.
3. Brush with egg yolk.
4. Steam for about 25 minutes or until cooked.
These crab cakes taste great with Grandma' s chilli sauce. Recipe to follow in future post.