A Farewell Lunch at Chicago 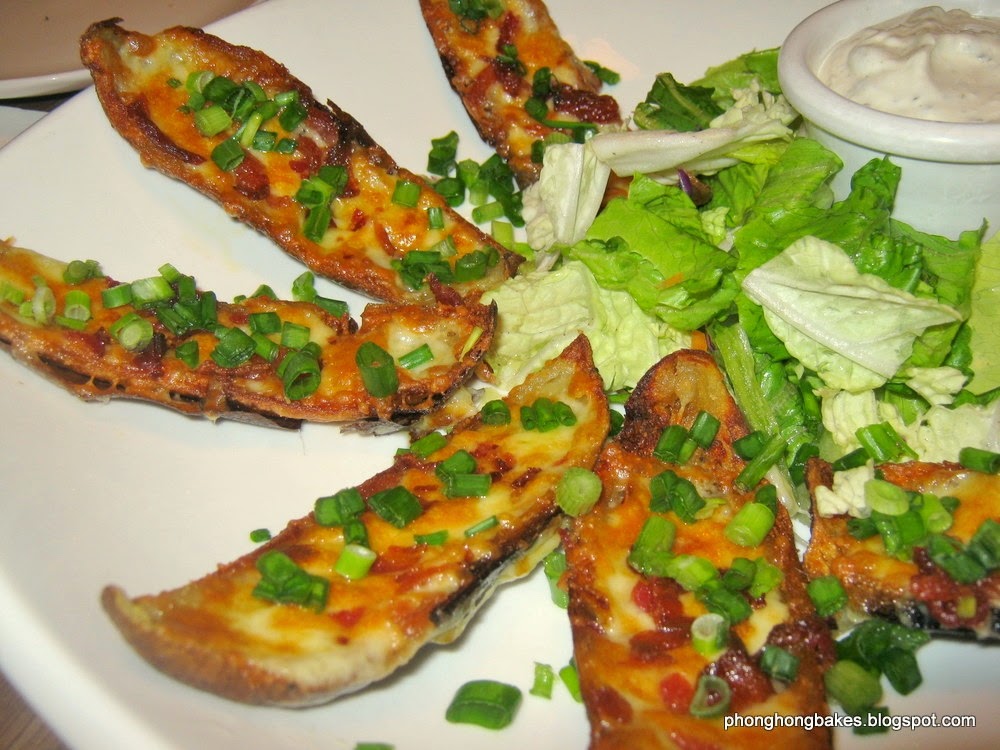 Last weekend, my brother and I took our Auntie to Chicago. My Auntie was flying home and we wanted to give her a farewell lunch. Initially, we thought of Japanese or Indian but my Auntie had tummy upset the day before. Since she was flying off that evening itself, we reckon that she should eat something that won't aggravate her tummy. Raw fish and spicy curry was out of the question.

What about pork ribs? That should be fine and Chicago it was! We were early and it was easy to get a seat. I have been there before with my partner a few years ago and I had a good impression of the ribs and nachos. But we never went back again because my partner was upset with the service.

Our drinks were inadvertently omitted from the bill and instead of issuing a new bill, the staff insisted that we should pay for it separately in cash. Not wanting to create a scene, my partner obliged. He never supports a restaurant if the service is bad. I agree with him but on this occasion, I decided to give Chicago another chance.

My brother is a fan of ribs and he was happy to check out the ribs at Chicago. Once we were seated, we got busy with the menu. There are other items besides ribs, like pizza and burgers but we were already decided on ribs. And of course we had to try the appetizers too.

We ordered the Beer Battered Mushrooms. These were really good. Very crispy on the outside with juicy button mushrooms on the inside. The portion was quite big. More that enough for 3 persons. It comes with a sour cream dip which was very nice.

When I spotted Potato Skins, ah, I had to try that! There are only 6 pieces per serving which comes with some salad and sour cream dip. To me the lettuce leaves were totally unnecessary and I suspect they were there just to fill up the void. Either that or the chef feels that we should eat some greens hah...hah... The filling consisted of cheese and bacon with a sprinkling of spring onions. It was not bad, but not really that great either.

Now on to the mains. The ribs come in two sizes - full rack or half rack. Had we not ordered appetizers, I would have gone for the full rack. My brother ordered a full rack as his "tangki" (tank) is bigger than mine. He is a six-footer after all :) I wish I had grown that tall but genetics was not on my side :(

I ordered the Flaming Kansas something something. Can't remember the full name. My Auntie just tagged along and got the same thing. The server, who is a foreigner who speaks with heavily accented English tried to explain something to us but we couldn't make out what he was saying.

It was when the order arrived that we finally understood. This particular ribs is doused with whisky (or was it Bourbon? Whatever) and zapped with a blow torch.

The server poured a small vial of liquor onto the ribs and proceeded to torch it. Kaboosh! My food went up in flames.

The end result was not a pretty sight. And it tastes just like it looks. In spite of the hoo-hah-up-in-flames-ribs it did not really taste like much to me. Not impressive at all and I wished I had ordered something else. But at least now I know what not to order next time. I kind of felt sorry for my Auntie. But on the bright side, that mini inferno ensured that the ribs were extra sanitized and no bacteria will attack my Auntie's tummy :D


The ribs come with a choice of two sides. I chose Coleslaw and Beer Battered Fries. My Auntie, not knowing what to choose, did likewise. Since the ribs were to be torched, the sides were served separately.

The Beer Battered Fries were pretty good. Very crispy. I haven't had fires fries for a very long time and I enjoyed them very much. It was quite a big portion and I had to help my Auntie finish hers.

Then there was the Coleslaw. Hmmm...and not Mmmmm.... It needs improvement, this one. Not enough dressing and seasoning. Quite blah but I needed the roughage :)

And how about my brother's order? He made a very wise choice by opting for the Original BBQ. Look at that. A full rack with Beer Battered Fries and Mashed Potatoes. Oiks, that's two sides of potatoes. I guess my brother couldn't decide between fries or mash and decided to go for both.

I did not try anything on my brother's plate because I don't make it a habit of taking food from other people's plate (unless if they make an offer). Likewise, I don't like people taking anything from mine. I am very territorial when it comes to food.  I remember giving a university mate my killer stare when she started pinching tempeh from my tray at the cafeteria tsk...tsk...tsk.... But if you ask for permission, I would gladly oblige :)

The service can be improved because our drinks did not arrive even after the appetizers were served. We had to remind the staff. Something as basic as serving drinks shouldn't go wrong.


Overall, I was quite pleased with the lunch with the exception of my choice of ribs. The serving portions are generous. And as my brother reminded me, it is way better than a rib outlet we went to in Damansara Heights where the serving size was so small and did not justify the price that we paid. The damage after discount was RM182.10. So will I come back to Chicago? Yes, I would. As a matter of fact, my brother and I plan to return to try the other items on the menu. We'll order a full rack each and exchange half a rack for variety. When it comes to food, we like to plan ahead hah..hah...